A new collection of ten pieces by Korean designer Wonmin Park manages to capture the heft and solidity of metal and stone while simultaneously infusing them with a delicate softness. Stone + Steel, presented by Carpenters Workshop Gallery as part of this year’s London Design Festival, mixes raw, polished, chiseled, and patinated surfaces into organically shaped tables, desks, and chairs that look like they’ll still be around for millennia after humans have perished from the Earth. 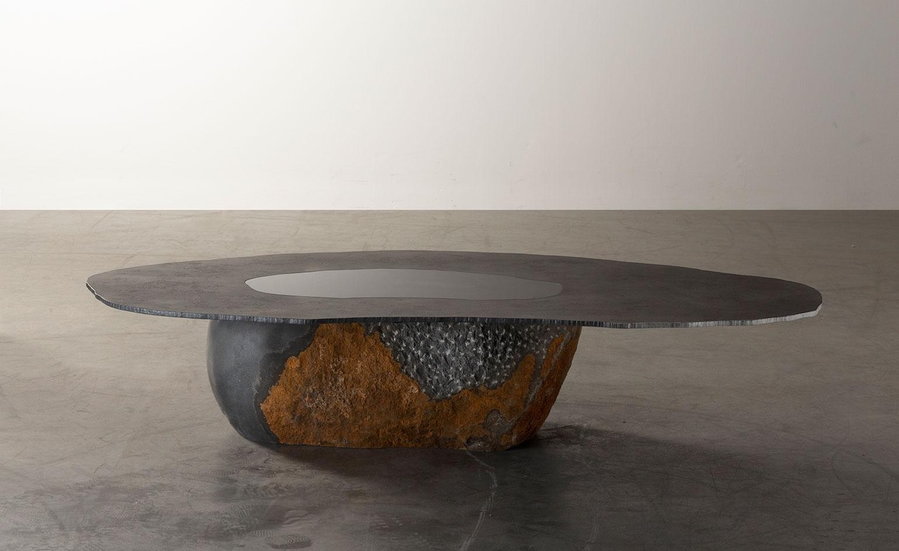 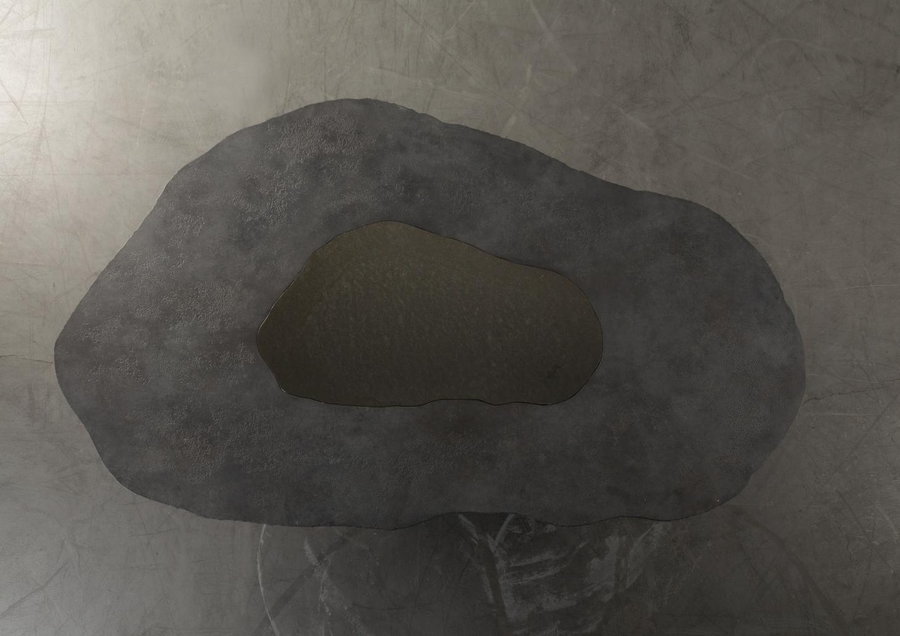 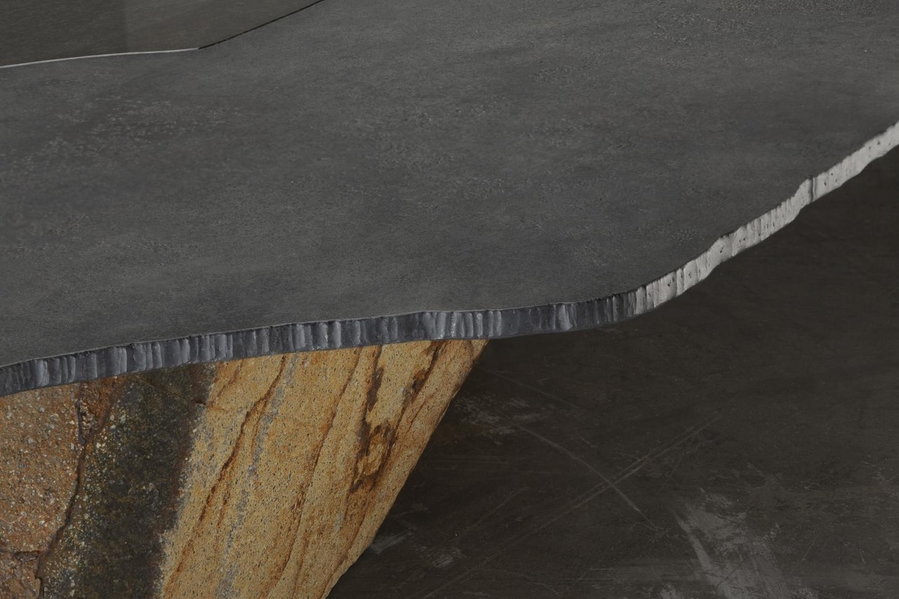 Volcanic rocks form the base of each piece, left mostly in their natural form. Mined in Japan, these hunks of rock have a rust-like outer layer that developed as a result of air and moisture penetrating fissures in the crust of the Earth and oxidizing the iron content of the stones. When cracked or chiseled open, they reveal deep, dark inner cores. Park tops each one with steel polished almost to a mirror finish to contrast the grittiness of the rock.

“All the texture in the stone is actually created by unexpected accidents and it’s never the same, and this is so intriguing to me,” Park says, adding that “the cut of the stone is vital to the success of each piece. Its linearity is something that nature cannot produce – only humans work in straight lines. Their flat-cut sides serve to highlight the textured lines and irregularities of the stones’ exteriors and emphasize their natural beauty. The steel adds dimension to the cut line of the stone and extends it further into space, creating volume and balance.” 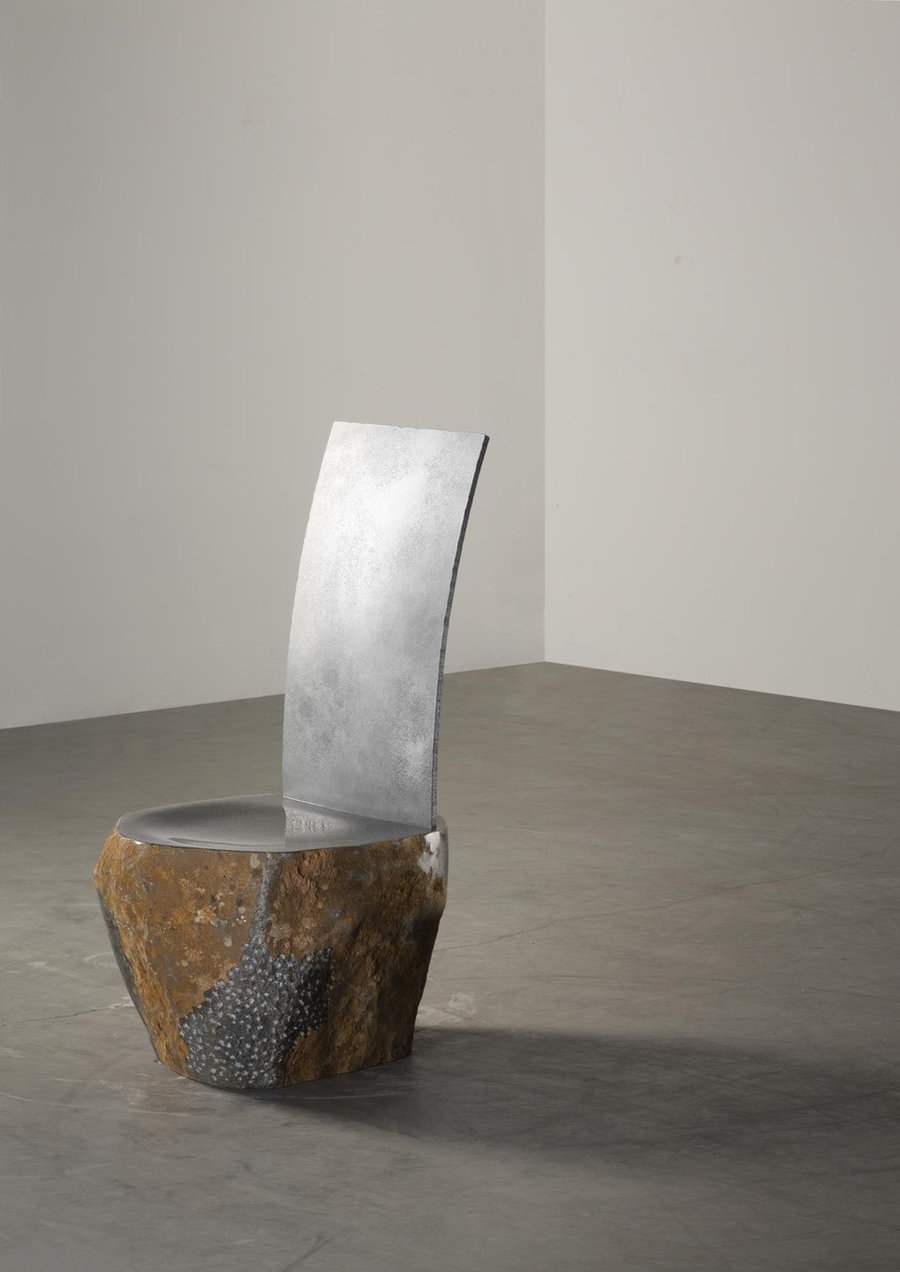 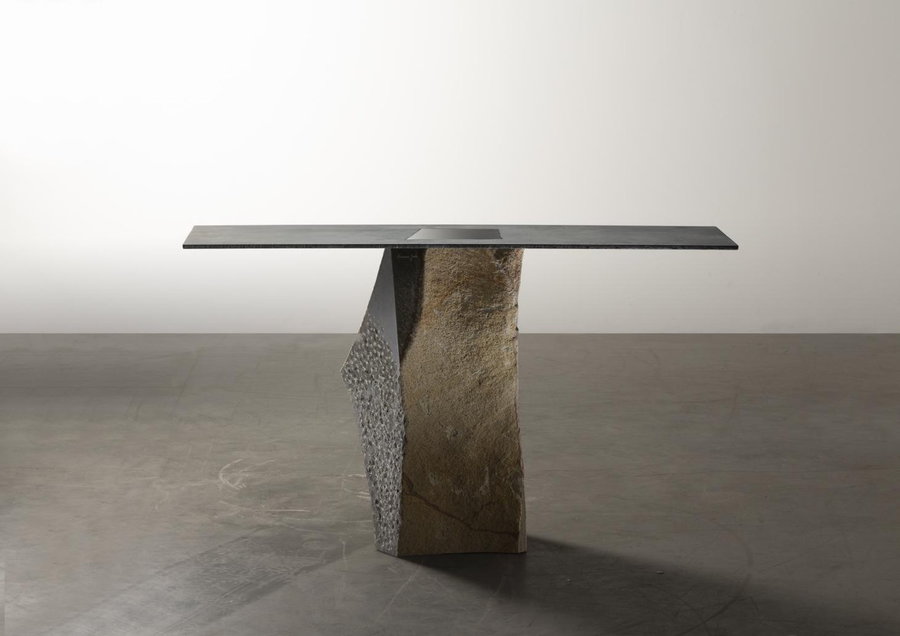 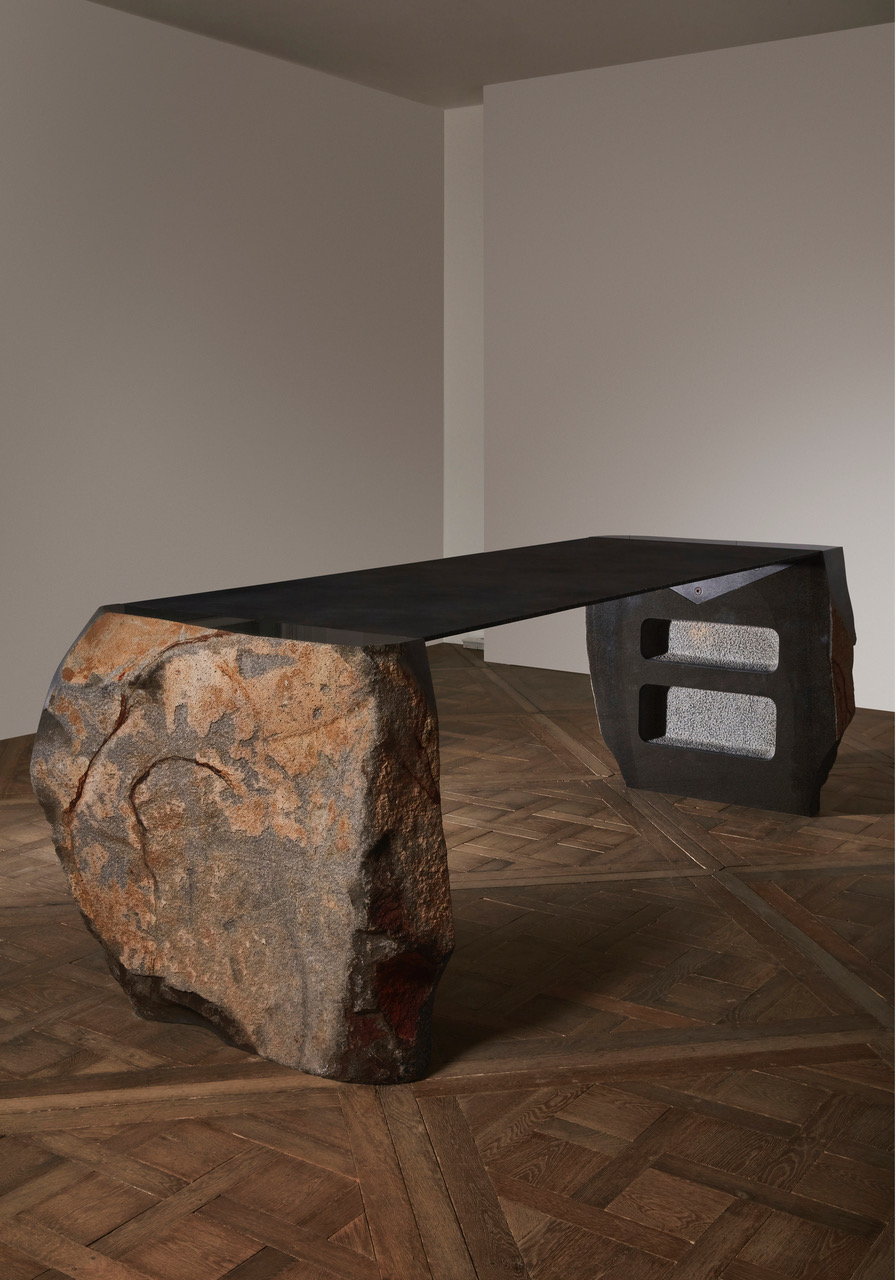 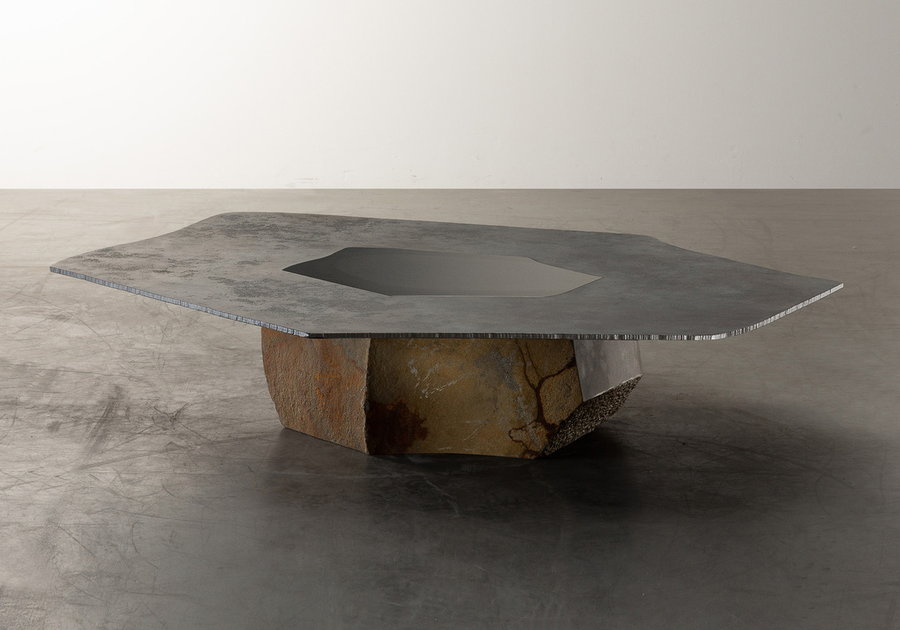 Park’s inspiration for this collection is rooted in the Japanese and Korean artists of the 20th century Mono-ha movement, which combined natural and industrial materials to visualize the tension between nature and the rapid development of Japan in the 1960s. Mono-ha, which translates as “School of Things,” focused on an exploration of materials rather than representation.

Although Parks’ work is both sculptural and functional, the spirit of Mono-ha is evident, even when he uses more refined contemporary materials. Straddling the line between “practical commodity and fine art,” as the National Museum of Modern and Contemporary Art in Korea described it, Parks’ oeuvre examines the ways in which materials can conjure certain feelings and associations. 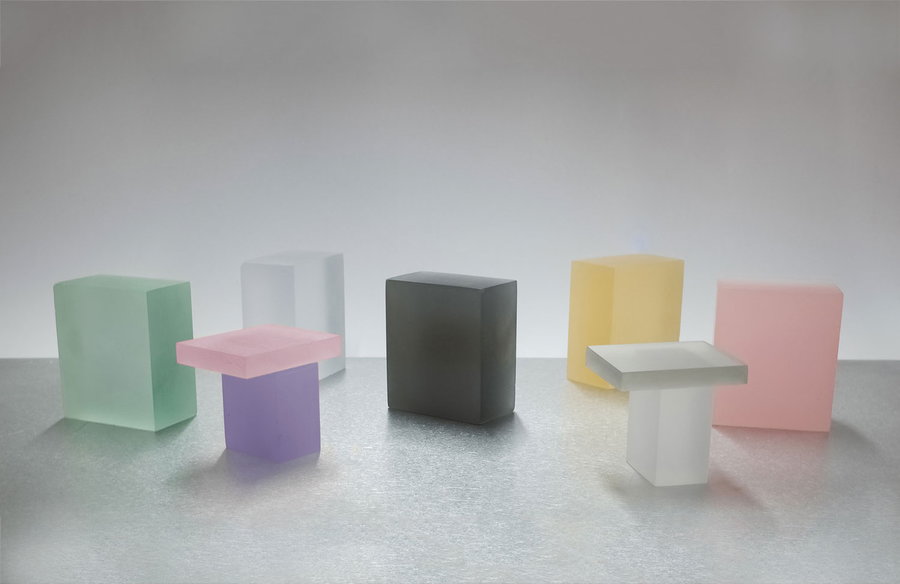 His cast resin pieces, for instance, aim for a “sense of lightness and purity,” a texture that gives him “the sensation of painting enveloped air.” Its translucence enables him to convey the quality of light found in the sky, in water, and in rainbows, with colors he painstakingly mixes himself before combining them with the resin base and molding the material into slabs. 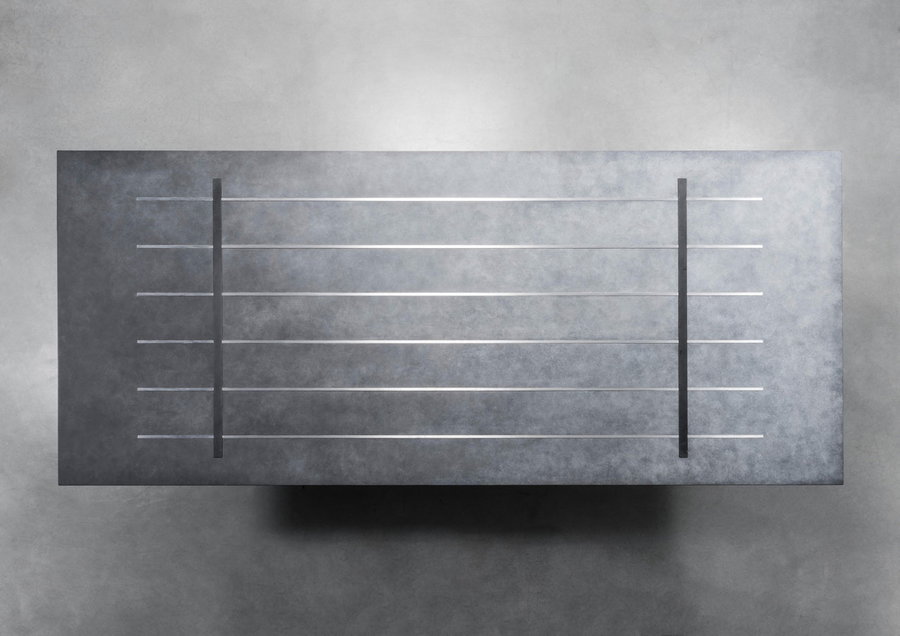 Metal, in contrast, is all about form and structure, as Park previously demonstrated with his “Plain Cuts” series. Sheets of aluminum come together into stark intersecting shapes, almost entirely rigid and rectilinear with just the slightest curve visible every now and then. “Stone + Steel” is a continuation of that series, and manages to give volcanic rock an almost malleable quality in its irregularity. 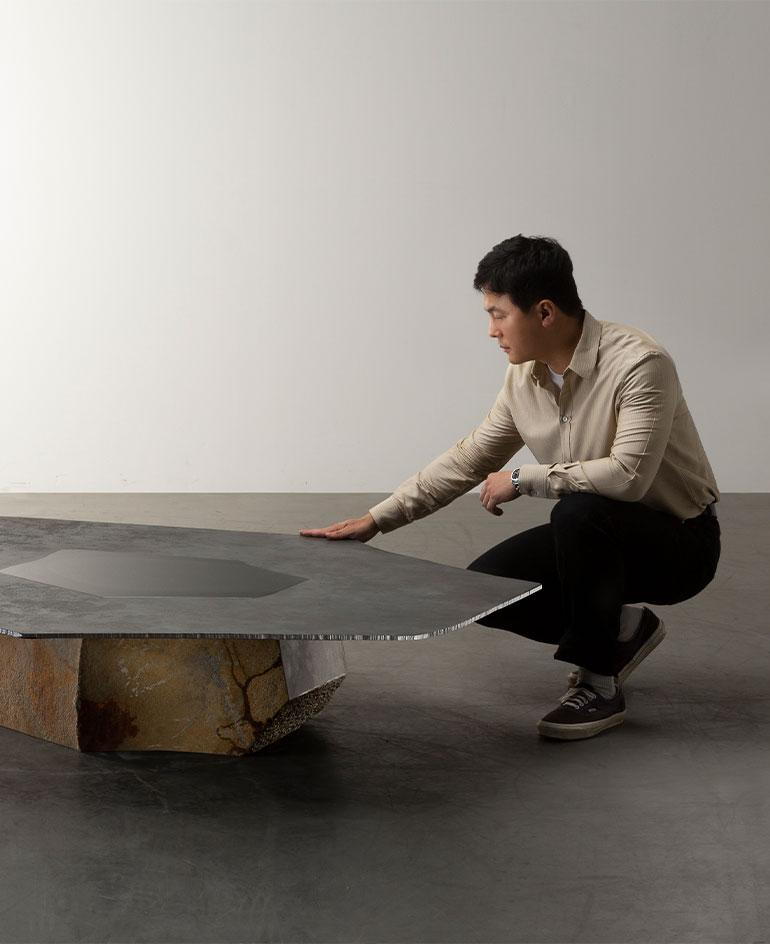 “In my designs, I want my objects to speak for themselves,” says Park. “To be beautiful, attractive, and engage with their surroundings. My work embraces simplicity, purity, and subtlety. People who experience my designs have the space to explore their own sensations and emotions.”