Solar technology has been around for a while now, but it’s taken a couple of decades to work out its kinks. Until a few years ago, photovoltaic systems were criticized for their poor flexibility, durability, portability, and overall high cost. These factors (and the pushback from the fossil fuel industry) prevented full-scale solar cars from becoming a reality at the time, but some recent innovations have brought auto manufacturers much closer to reaching that goal. Take the Stella Vie for example. This unconventional model represents one of the first major steps toward a commercial solar-powered commuter vehicle. 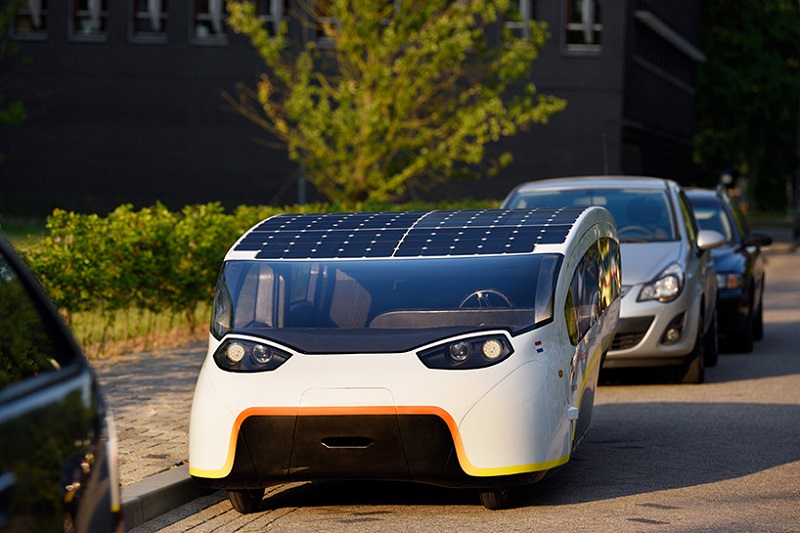 Stella Vie’s creators, the solar team over at the University of Technology Eindhoven in the Netherlands, claim that their vehicle is “the most efficient family car that has ever been built.” The “Vie” model is an update on two previous Stella concepts, both of which have been in development for the better part of the past decade. Stella Vie is completely solar-powered, seats five people, and can travel an impressive 1000 kilometers, or about 621 miles, on a single day’s worth of sunlight. From the front, it almost looks like a cartoon character, but that’s part of the fun. 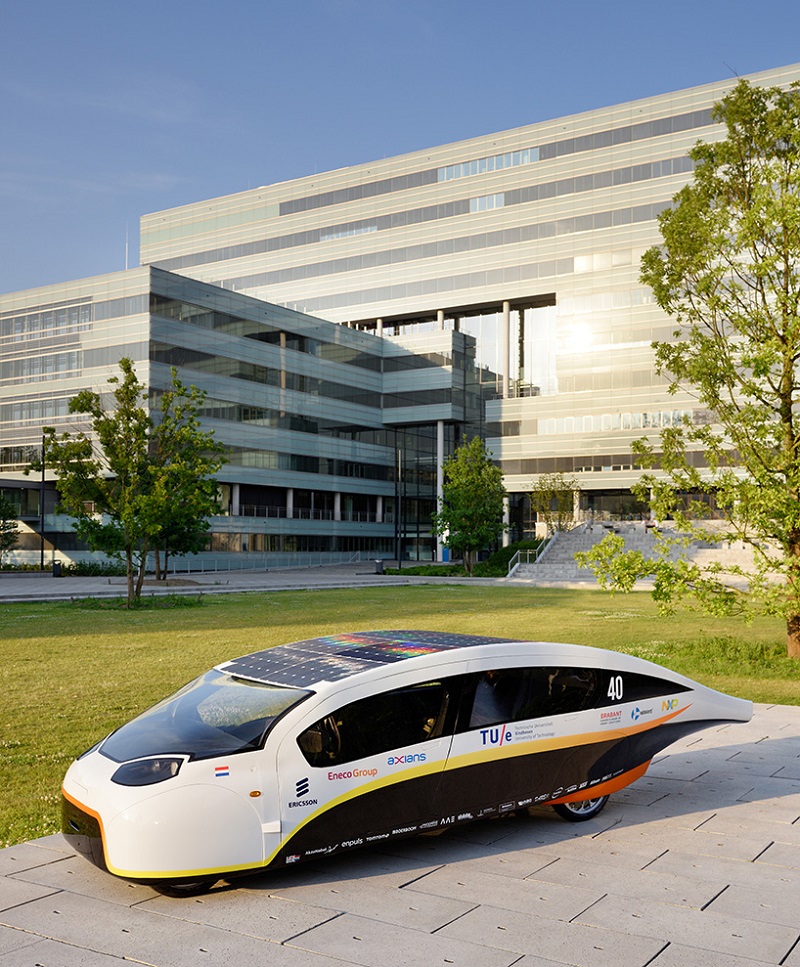 Like its predecessors, the Stella and Stella Lux, the Stella Vie was designed to compete in the annual World Solar Challenge. The car’s curving roof is completely covered in solar panels and was intentionally shaped to be nine percent more aerodynamic than the Lux model. If the Vie generates any surplus energy, it can easily be fed back into a house or local electric grid. A built-in smart charging and discharging system keeps track of energy prices and informs the driver of the best places to recharge along their route. 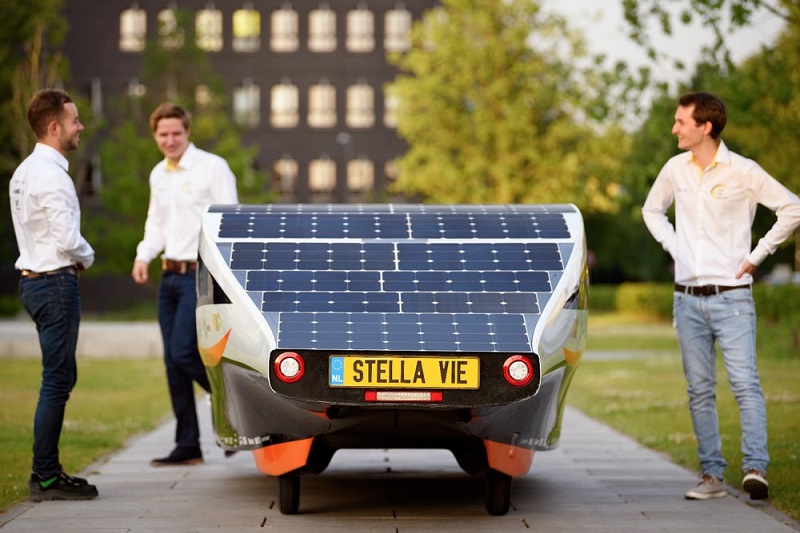 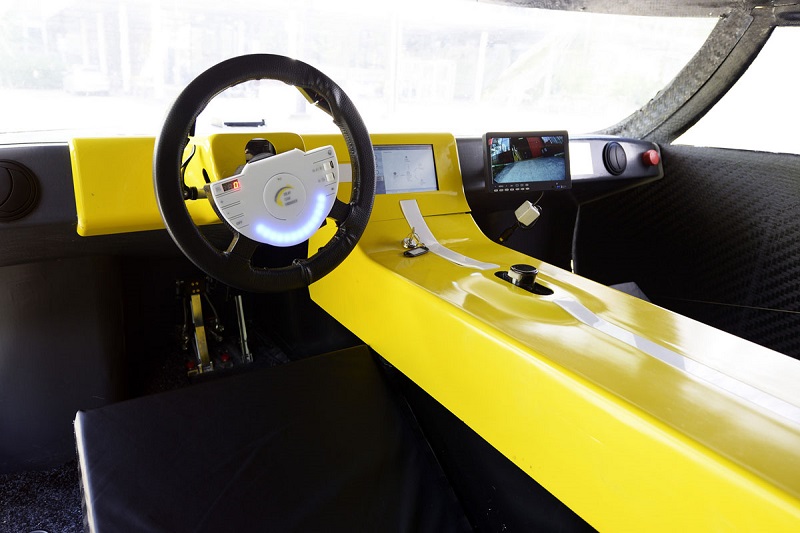 The Stella Vie’s solar navigator will find the most efficient route for you no matter where you’re going, meaning you’ll always be maximizing your energy savings. Every time you go for a drive, the car will tell you exactly how much energy you’ve saved and how much more you would have used in a gas or diesel-powered vehicle. To make things even more eco-friendly, the car includes a built-in notification system that lights up to give the driver tips on how to improve their driving efficiency. If you love those smart features, you’ll really get a kick out of Stella Vie’s built-in solar parking system, which uses weather data, height maps, and a parking probability map to find the perfect sunny spot for the car to recharge in! 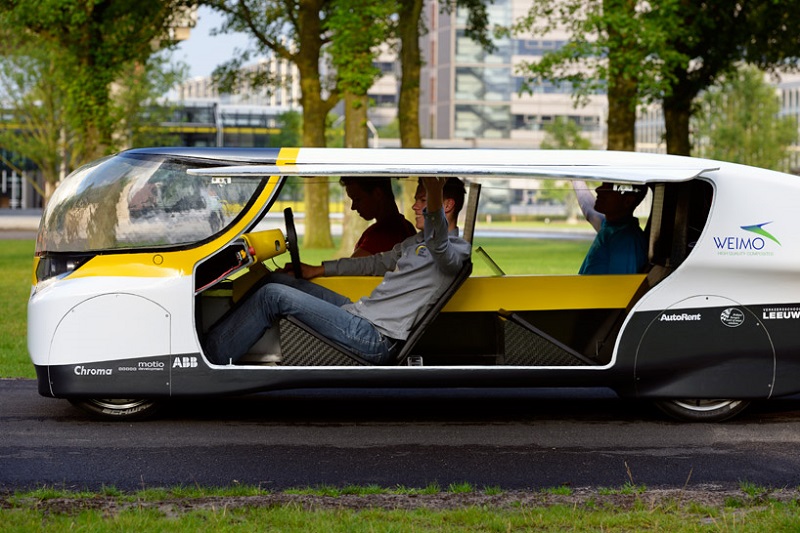 A quick glance at the car’s design and skinny tires makes it clear that it belongs on well-maintained city roads, and that it isn’t likely to tolerate much in the way of bumpiness or ice. Still, it’d be an interesting way to commute around a city or suburb. Consider the number of places on earth with dangerously polluted air, and it becomes easy to see the appeal of an urban center full of zero-emissions solar cars. 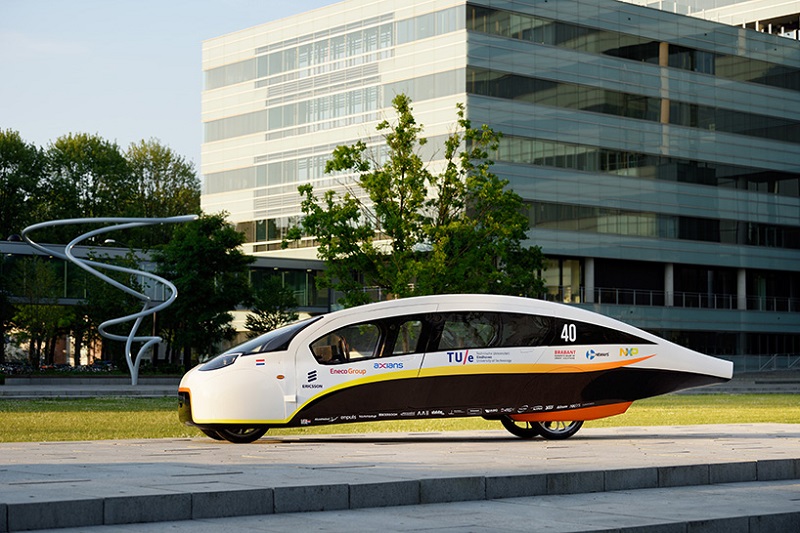 “Vie, which is french for ‘life,’ is the car for everyday life,” explain its creators. “Although she is lower than conventional cars, due to her big doors and handles she is easy to enter. Inside she provides a comfortable driving experience due to ergonomically optimized seats, a clean and spacious interior and intuitive controls for both driving and infotainment. A futuristic solar car that is ready for today! But that’s not all. Vie also stands for the Roman numeral ‘V’, or 5, as Stella Vie is the first solar powered family car ever to seat five persons!”