In some of the world’s most famously tiny micro apartments, like a $300K closet in London and a 12-by-7-foot hole in the wall in New York City, creative division of space is just a given. Shortages of affordable accommodations in desirable cities often mean house hunters and renters have to work with less square footage than they’re used to, especially when the ‘apartments’ available are literally former walk-in closets, laundry rooms and storage areas.

When you’re downsizing into a space-challenged apartment, getting rid of a bunch of stuff is the first step, but actually, living there on a day-to-day basis ultimately requires all sorts of space-maximizing tricks and hacks. Sometimes that means resorting to methods like storing clothes in a rarely-used oven or building a sleeping loft so shallow you better hope you don’t sit bolt upright in the middle of the night, but some crafty designers and DIYers have managed to come up with integrated solutions that look great, especially considering the diminutive dimensions of each room. 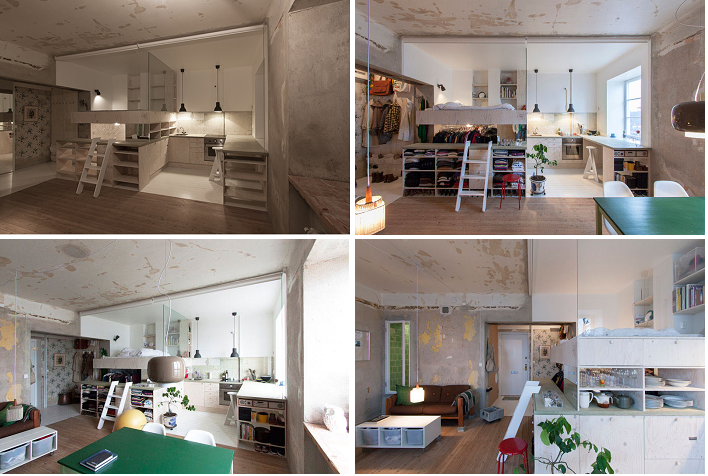 This Swedish apartment spent 30 years as a storage space for furniture, and in the 1980s, underwent the beginnings of a renovation before the owner’s illness halted the work. The space was left untouched until his death, and went up for sale in 2012. What the buyers saw when they walked in was grim: half-removed wallpaper peeling down to the floor, a kitchen faucet sticking out of one wall, a handful of tiles and rats in the bathroom.

But despite the fact that the space wasn’t exactly move-in ready, they saw potential for an affordable apartment close to all the shops, restaurants, job opportunities and other perks of inner Stockholm. They hired Karin Matz Arkitekt to envision a new interior setup that would keep the space one big open room while fitting in a full kitchen, living room, dining area and bedroom with plenty of space for all their clothes. 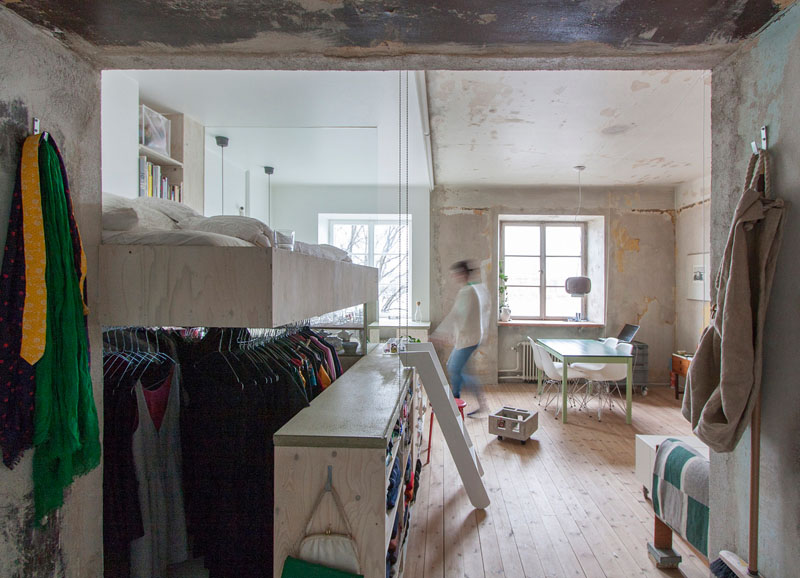 On top of that, they wanted a walk-in closet, all of the standard appliances that can be found in any modern apartment, a luxuriously large bathroom with a tub, flexibility in the use of all the spaces and an airy feeling – all on a tight budget. That’s a tall order for any architect, but what Matz delivered is an unexpected built-in room-within-a-room that meets all of the couple’s expectations. 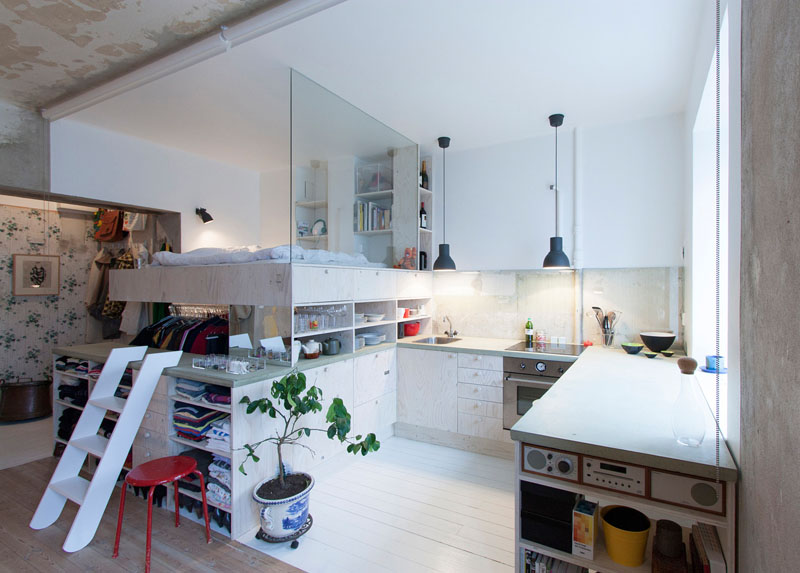 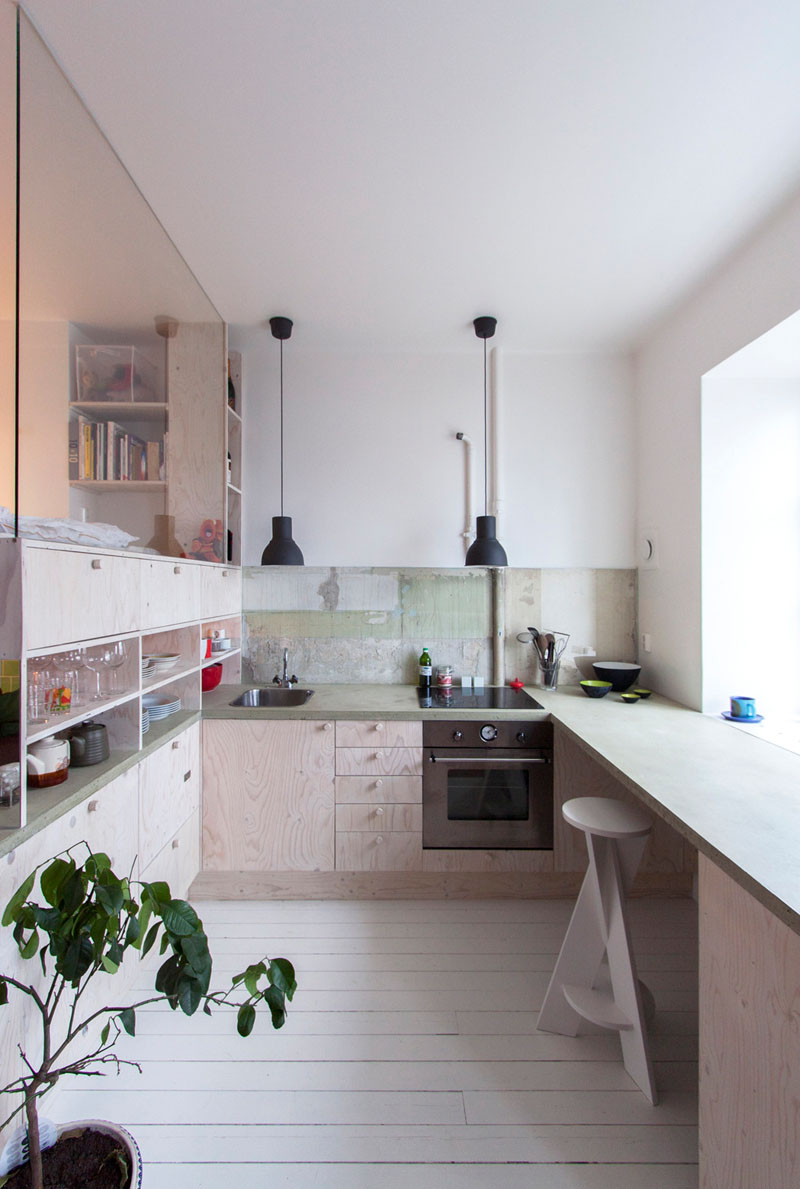 Matt used Ikea kitchen units as the basis for both the kitchen itself and the adjacent lofted bedroom, which elevates the king-sized bed platform over the walk-in closet and a cabinet full of folded garments. A large, clear pane of glass separates the bed from the kitchen to maintain views through the window and allow daylight to penetrate the entire space. In the kitchen, a long stretch of countertop connects from the stovetop to another small cabinet unit, enabling the residents to use it like a bar. 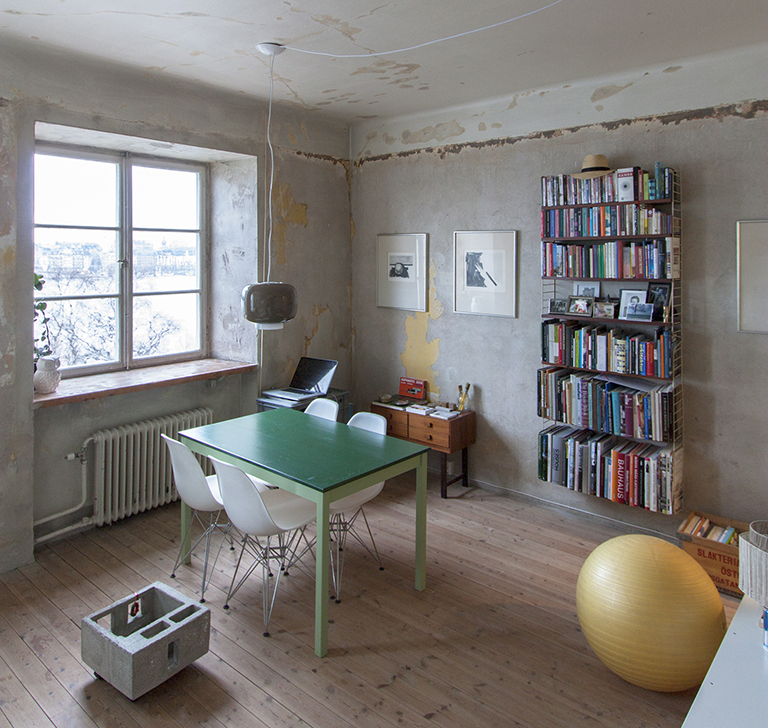 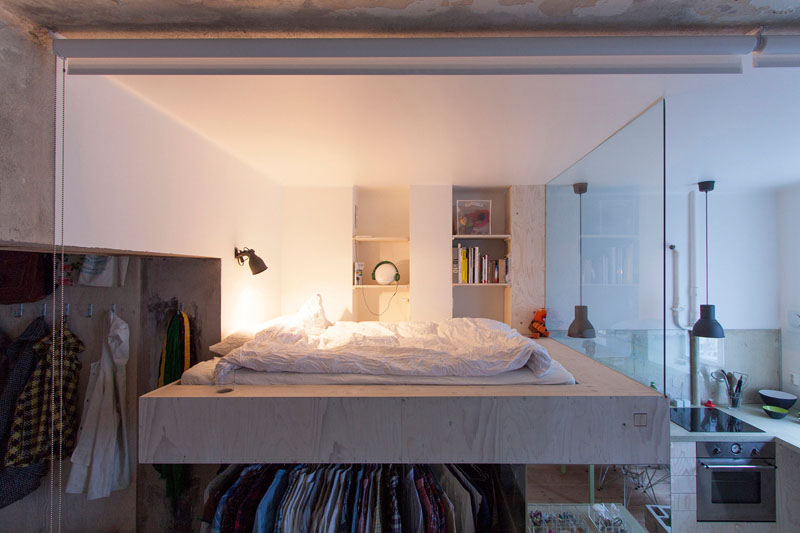 Opposite the built-in, the other side of the room is left open, with plenty of space for free movement, but it’s easy to imagine this setup working for even smaller apartments lacking that living and dining area, so long as you don’t mind looking down on your partner as they cook. The glass pane gives a new meaning to the phrase ‘breakfast in bed,’ but a curtain panel could always used to provide privacy when desired.