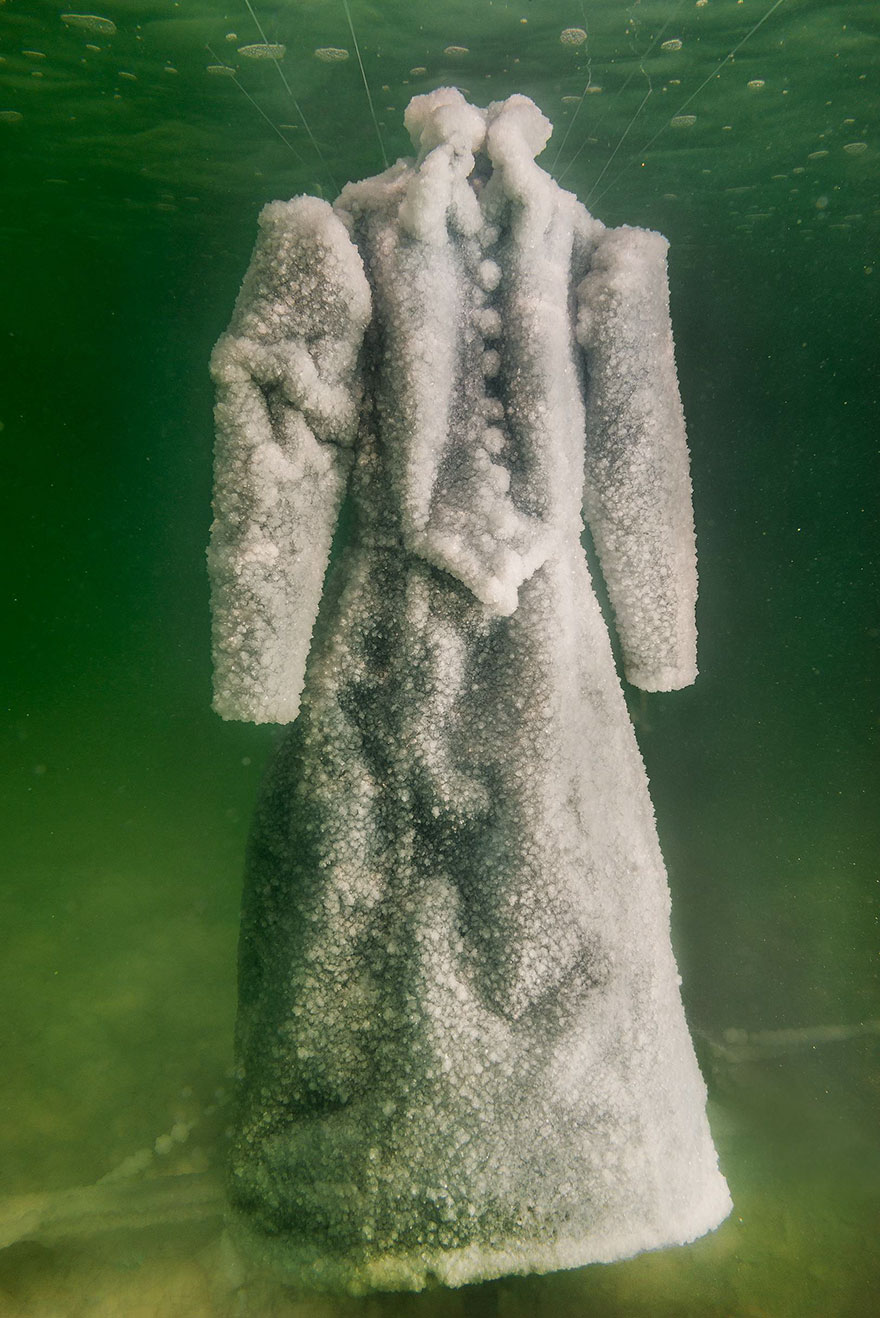 There is something almost voyeuristic about peering at the underwater images of Israeli artist Sigalit Landau‘s installation artwork, ‘Small Hasidic Salt Bride,’ which emerged from its subterranean resting place in 2014, after two months spent suspended beneath the Dead Sea.

Encrusted salt crystals embrace the body of a period dress, submerged in water and suspended by silver threads. Murky, yet starkly white, as if encased in seed pearls, the treasures of the sea—the image is arresting, poignant and mysterious. A photo series in eight parts makes up the ‘Salt Bride’ touring art installation, which has exhibited around the world. 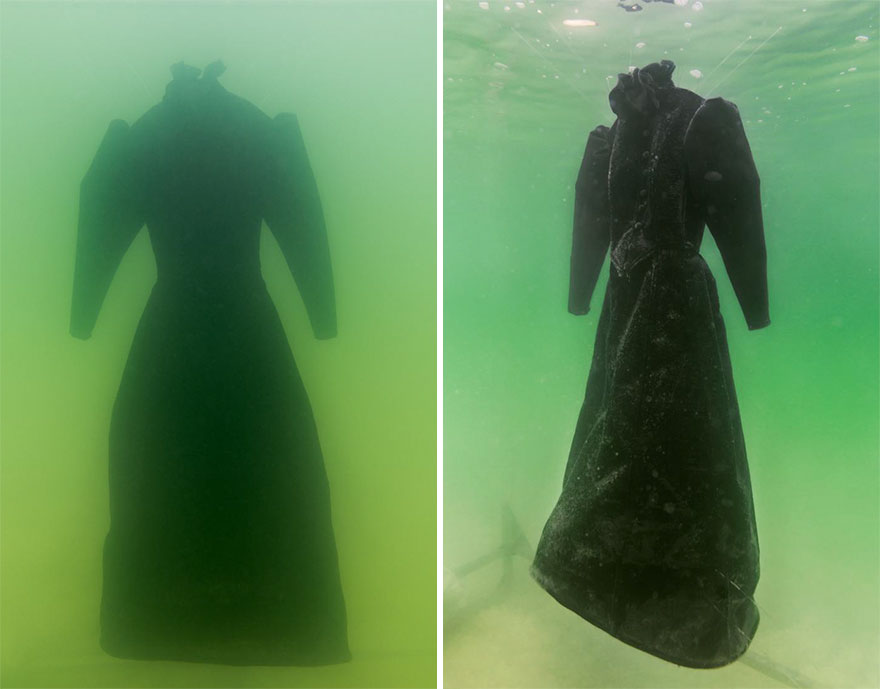 From black to white—made from fiberglass and synthetic net—’Small Hasidic Salt Bride’ shows a period, black gown submerged in the Dead Sea for two months. 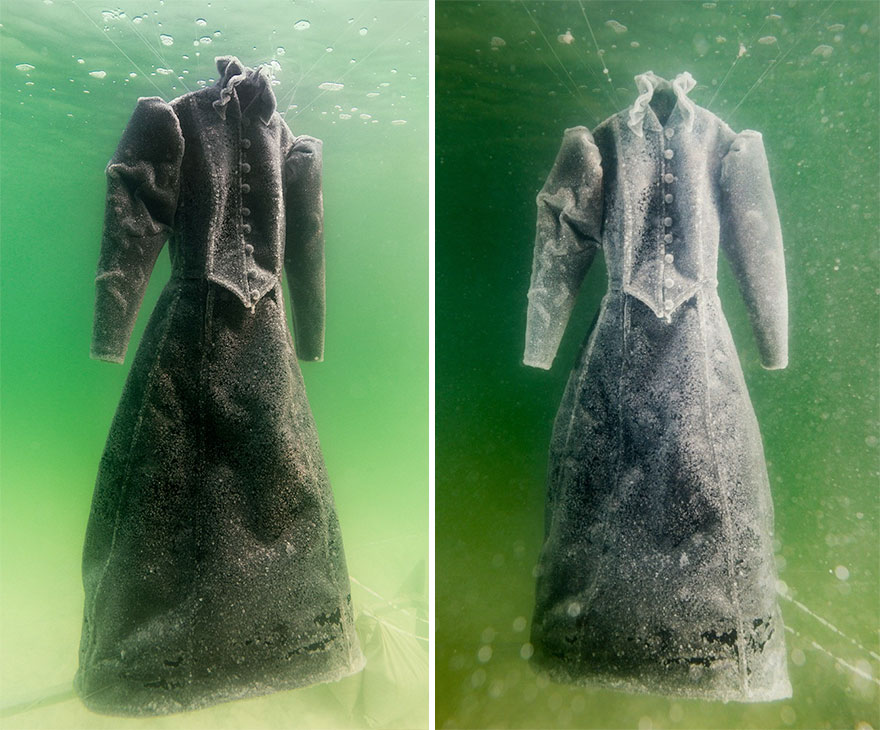 When it comes out, it looks poignant and striking, and tells a gothic tale of love lost.

Made from synthetic net and fiberglass, ‘Salt Bride’ has a secret, almost shameful, aura—the eerie sea-shade of translucent green, the lurking bulk of the dark, buoyant dress when viewed from underwater.

What has she to hide? What brought her to store her secrets deep beneath the sea, floating and alone? Appearing to be brought down by its own weight and bulk, by its cavernous skirts, ‘Salt Bride’ has a sad, hollow presence.

As salt crystals slowly begin to gather together on the seemingly frost-flecked fabric, there’s a sense of extreme cold and of suspended animation. This cryogenic artwork embodies gothic drama and just cries out for comfort. The sense of loss and tragedy is not coincidental; ‘Salt Bride’ is based on S. Ansky’s 1916 play “The Dybbuk“—or “Between Two Worlds”—in which Leah, a young Hasidic woman loses and is then possessed by her dead lover. 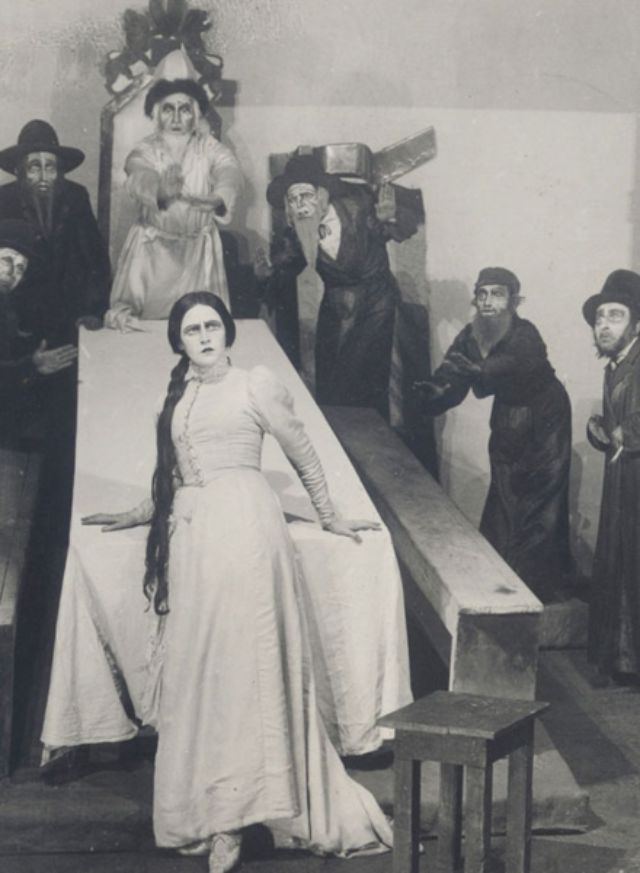 The ‘Small Hasidic Salt Bride’ dress is a replica of the actual gown worn in the 1920s stage version of the play, staged at the Habima Theater in Moscow, 1922. 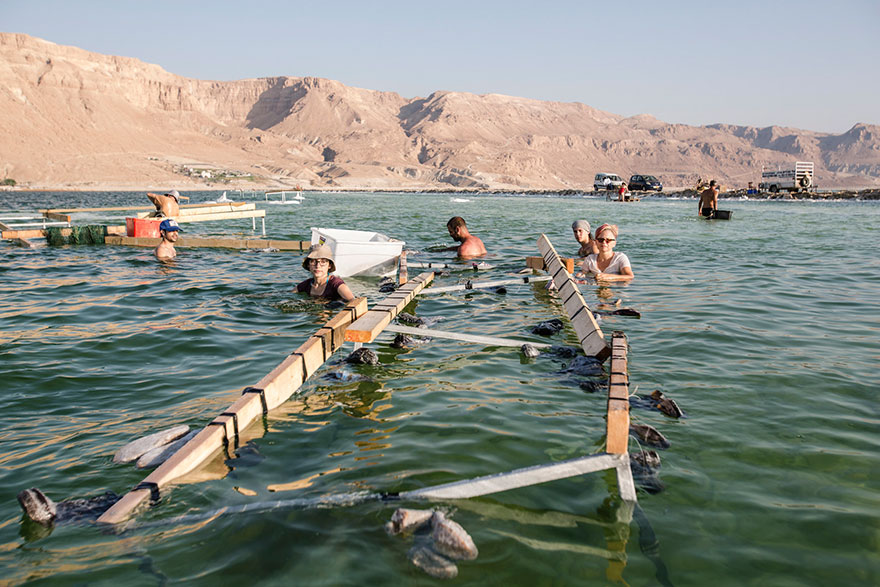 Scaffolding was erected to suspend ‘Salt Bride’ beneath the waves. Over the next eight weeks, the Dead Sea tide and its salt crystals would transform the sculpture, coating it in a crusty white shell. 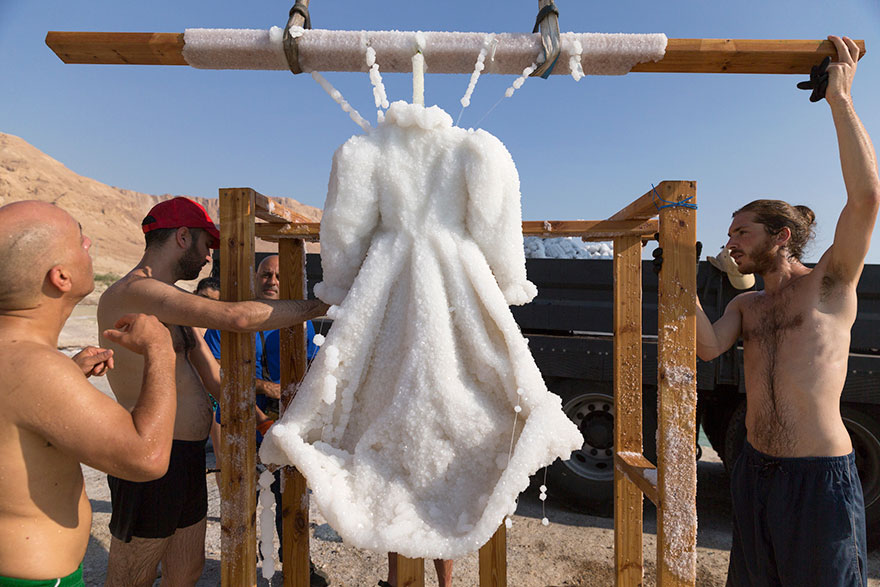 Salt preserves and solidifies. Like Miss Havisham in “Great Expectations,” the bride is revealed in suspended animation; Time has stopped and produced a shroud—a ghost of what was to be, as life and love is claimed by the sea.

“Siigalit Landau has been scratching the surfaces for two decades, but the bruises are still open; the pain doesn’t seem to ease. She spreads salt crystals on open injuries… immerses them in the Dead Sea… but their bloody presence is always there,” according to the artist’s website. 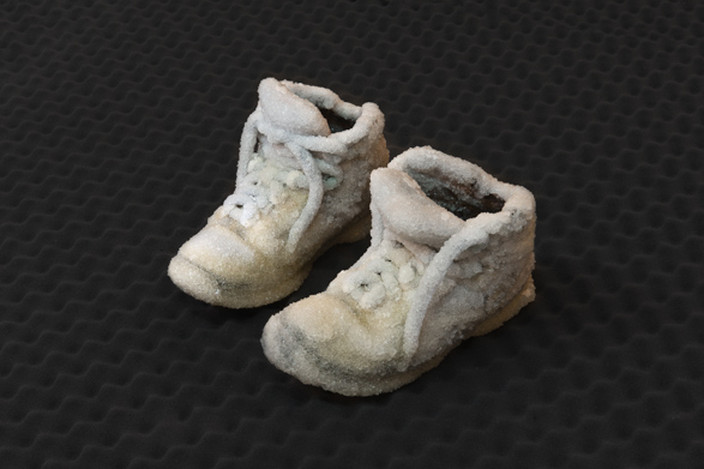 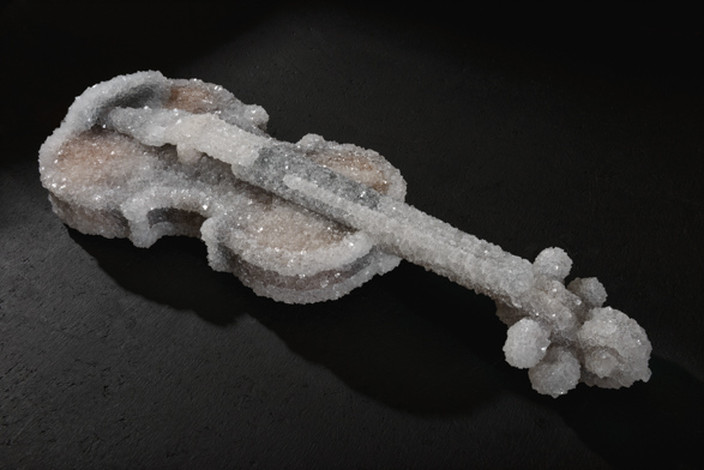 Landau has exhibited around the world: London, New York, Amsterdam, Berlin. She has lived in Pennsylvania, USA and in London, UK, and she likes to explore a sense of being unsettled and nomadic in her artworks. ‘Small Hasidic Salt Bride’ is part of her ‘Salt‘ project, where objects are immersed in the waters of the Dead Sea and left for a sufficient time for them to develop a crystalline coating.

Shoes, a hangman’s noose, a fisherman’s net, a violin—they all possess a sense of being frozen in a moment of uncertainty. They all possess a wistful quality of things unsaid and undone, of time overtaking possibility.

“Landau’s work is of a bridge-maker, (un)consciously looking for new materials to connect the past to the future, the west to the east, the private with the collective,” according to the artist’s website.