Paying tribute to the first historic flight into space, the chic VIP lounge in Russia’s Gagarin International Airport highlights both past cosmic accomplishments and modern design triumphs.The new airport in Saratov was named in honor of Yuri Gagarin, the first man in space who touched back down in that city almost 60 years ago. Management company “Airports of Regions” charged Moscow-based VOX Architects with inventing an exclusive waiting area that honored Gagarin’s singular accomplishment. 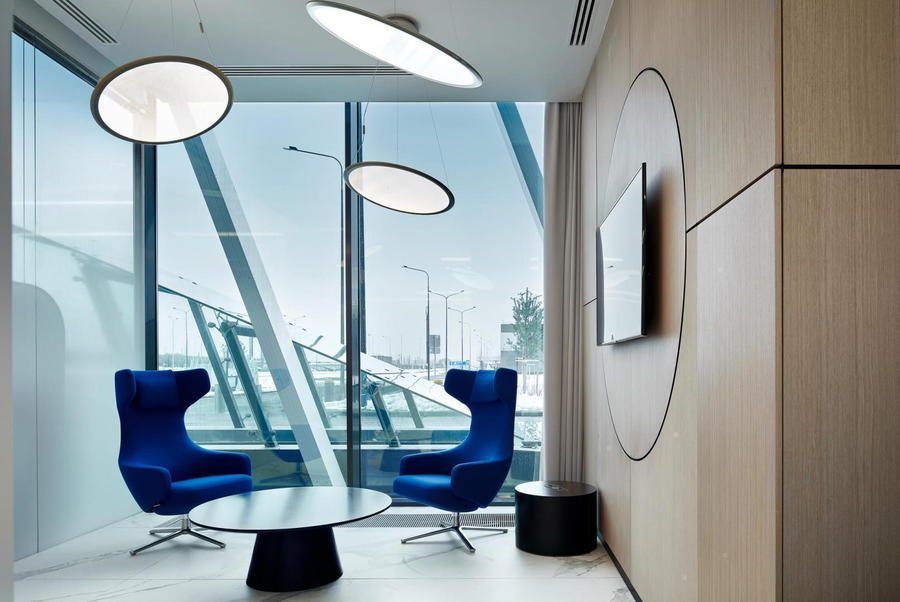 Several statement pieces in the lounge point visitors towards the stars. The focal point of both levels is the floating staircase that orbits around an illuminated elevator. Stepping into the lift doors, visitors might picture themselves ascending a rocket silo. 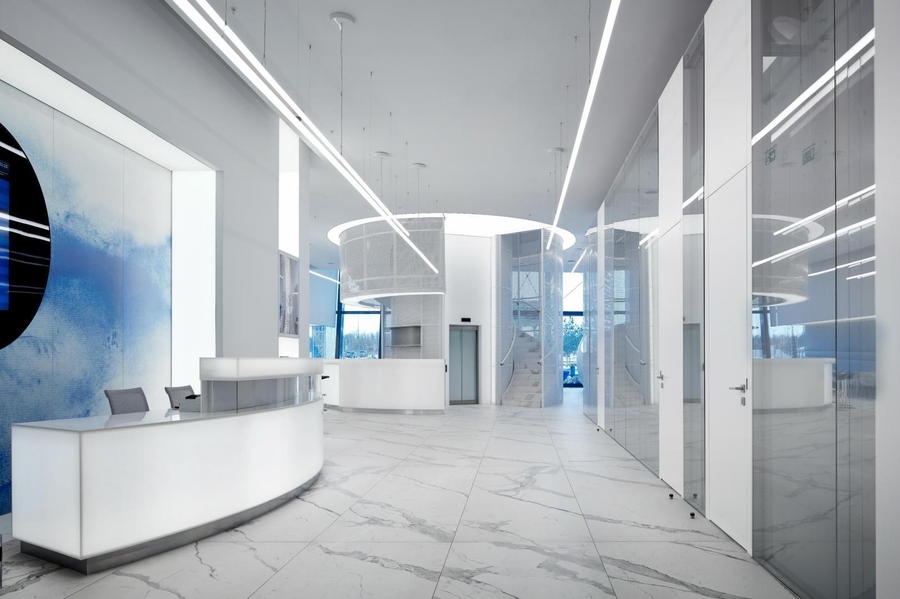 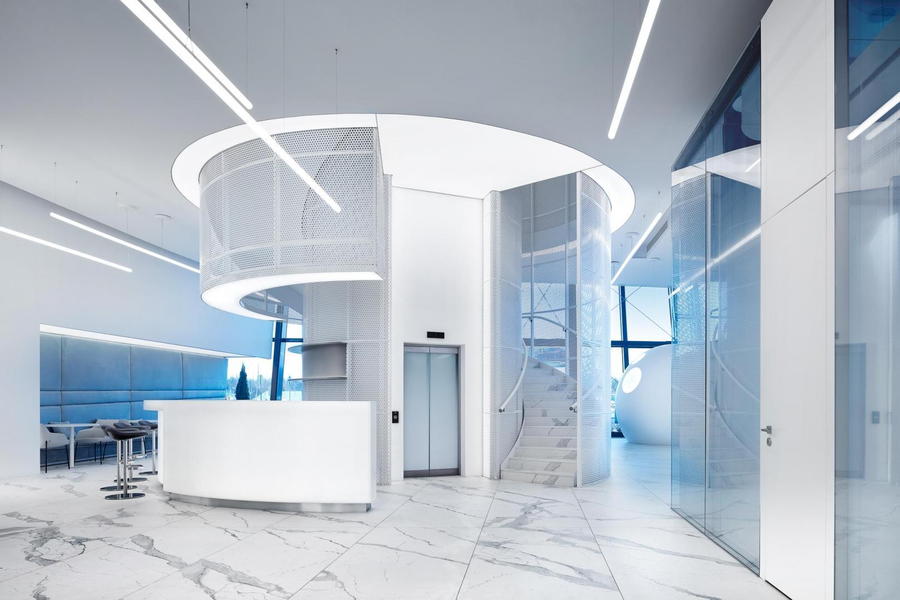 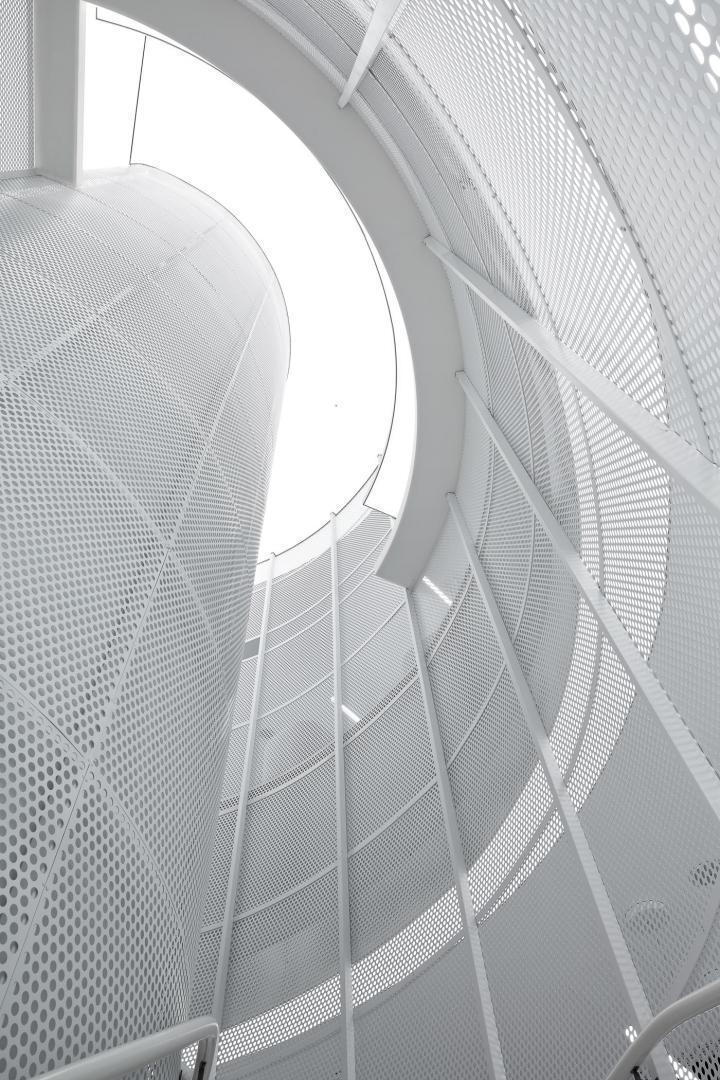 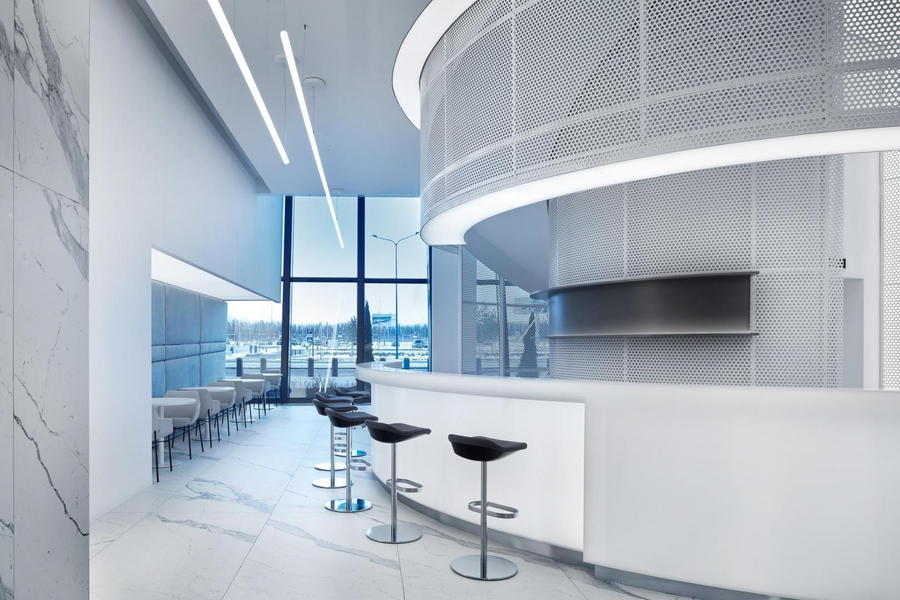 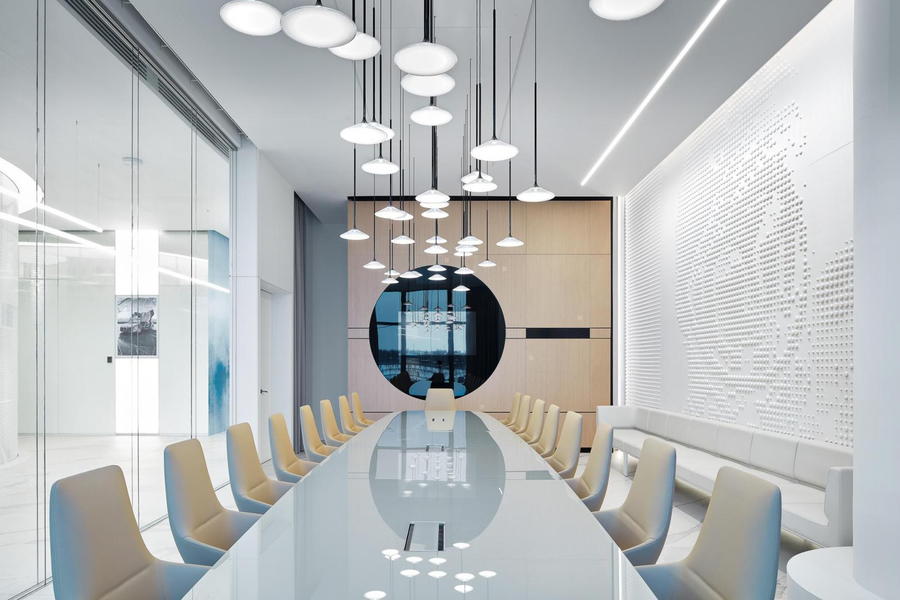 Adorning one wall of the conference room is a statement-making relief of Gagarin’s helmeted face. Dozens of saucer pendant lights hang at various lengths over the table in this area, achieving the effect of a virtual asteroid belt. Plus, the reflective tabletop acts like the moon, reflecting light all around the chamber.

The designers adhered strictly to a blue and white color palette (with stainless steel accents) for this project — the hues Gagarin would have seen as he blasted off from the earth into the heavens for the first time. Alabaster and gray floor tiles are reminiscent of clouds, and much of the seating is upholstered in a deep, electric blue, mimicking the night sky. A gradient-printed glass hallway mirrors that sensation as patrons pass through. “The color reminds us of a rocket shooting into the mesosphere,” Akhremenkova says. 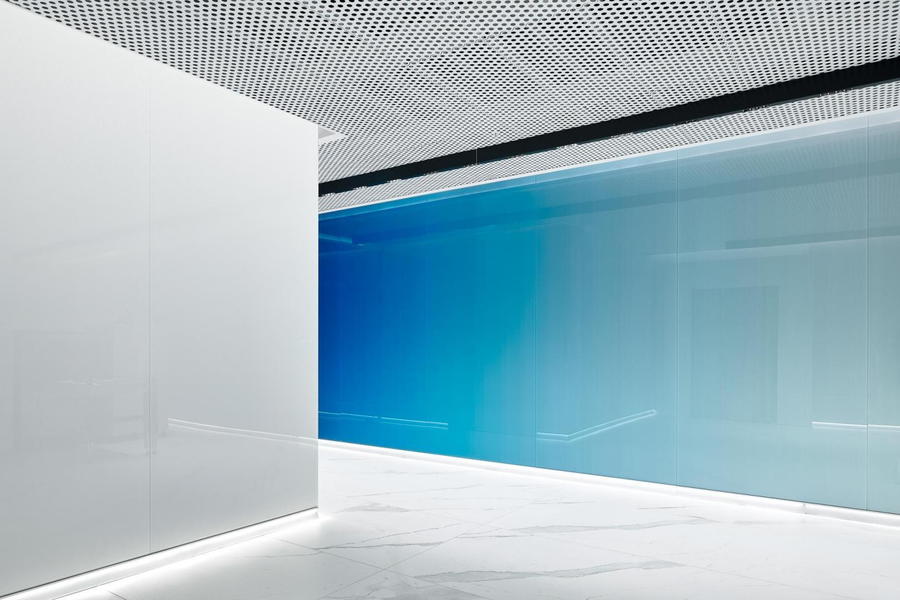 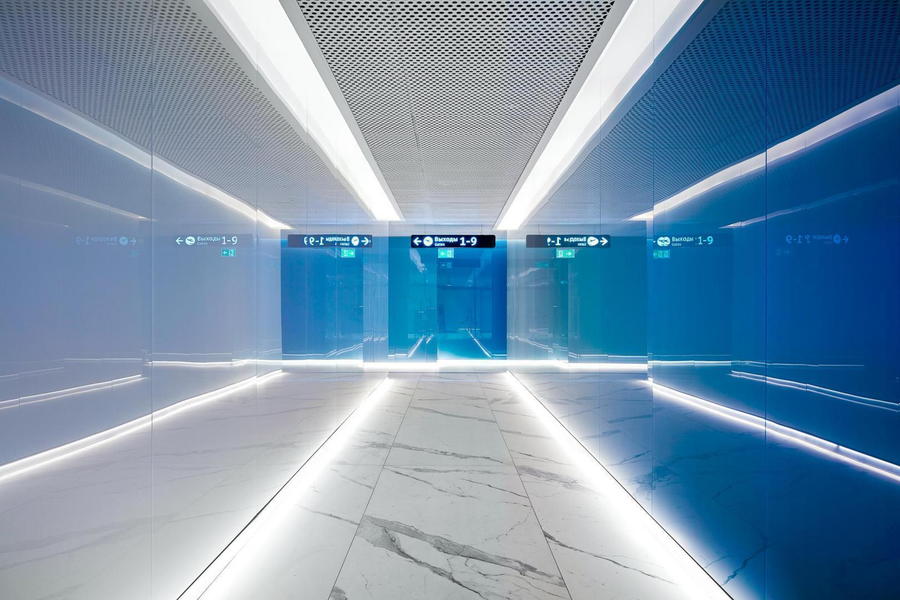 Large, flat circles of lighting in the meeting rooms simulate solar flares. Even the bathrooms hint at outer space with their hovering orb toilets and planet-like mirrors. Still, the lounge’s most overt nod to astronaut travel is an acrylic-lined “capsule,” an abstract version of Gagarin’s own transport into the cosmos, Vostok 1. While patrons relax inside the dark, circular booth, “it passes on this amazing story to a new generation,” Akhremenkova notes. “My seven-year-old daughter took part in the advertising shoot and still recalls the capsule with delight.” 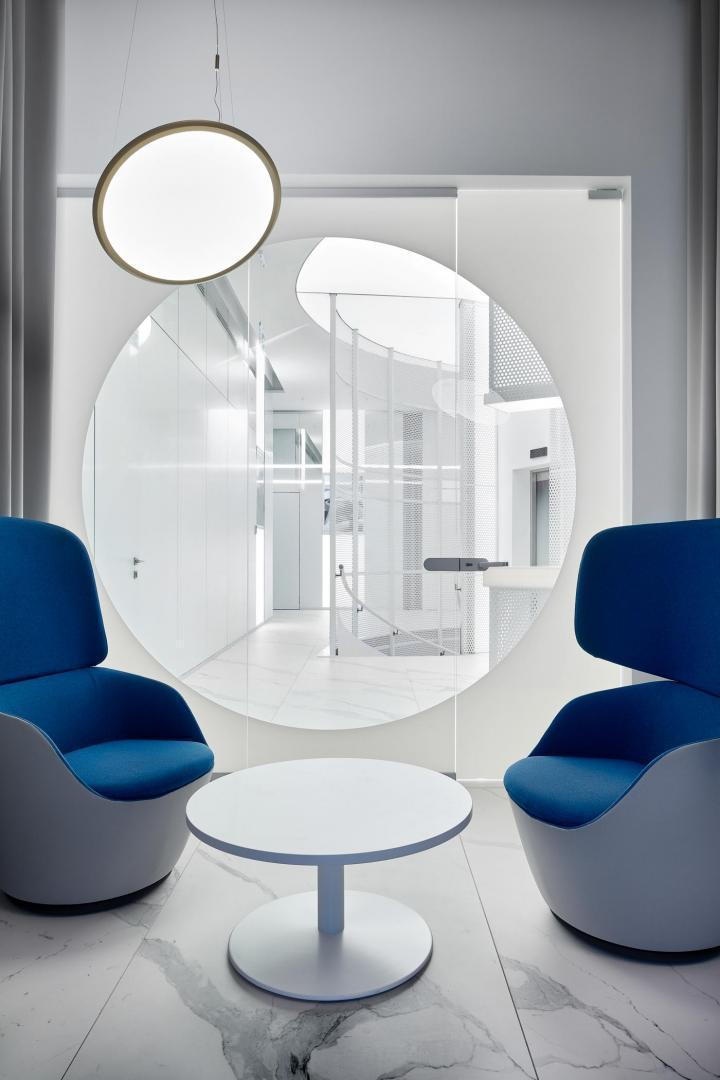 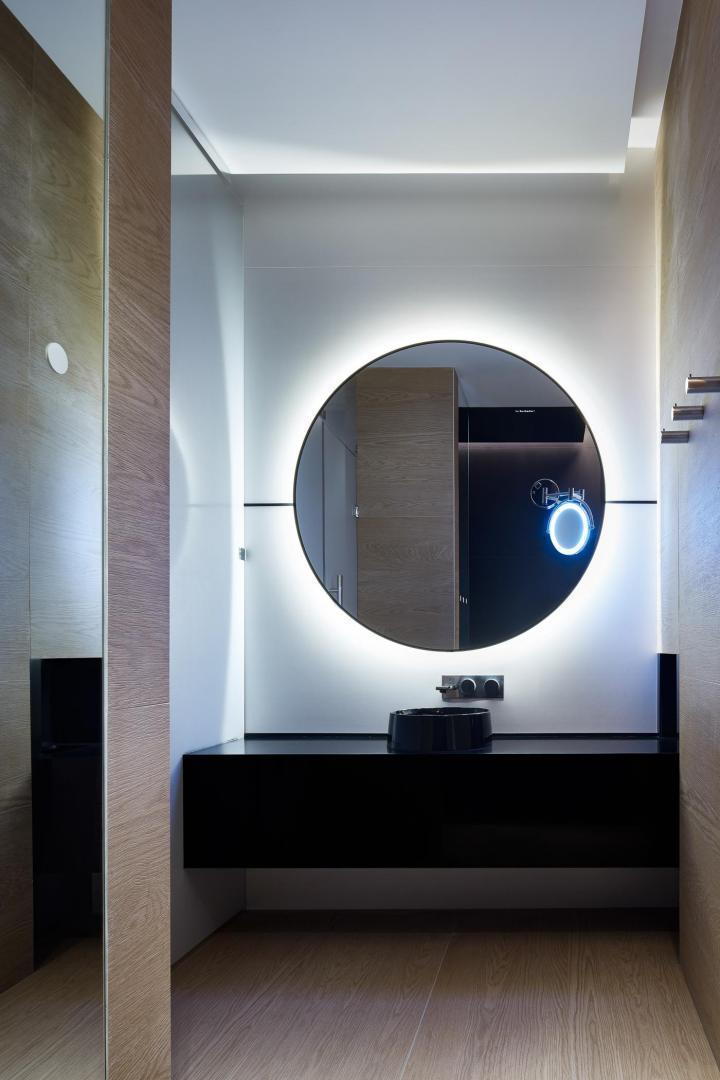 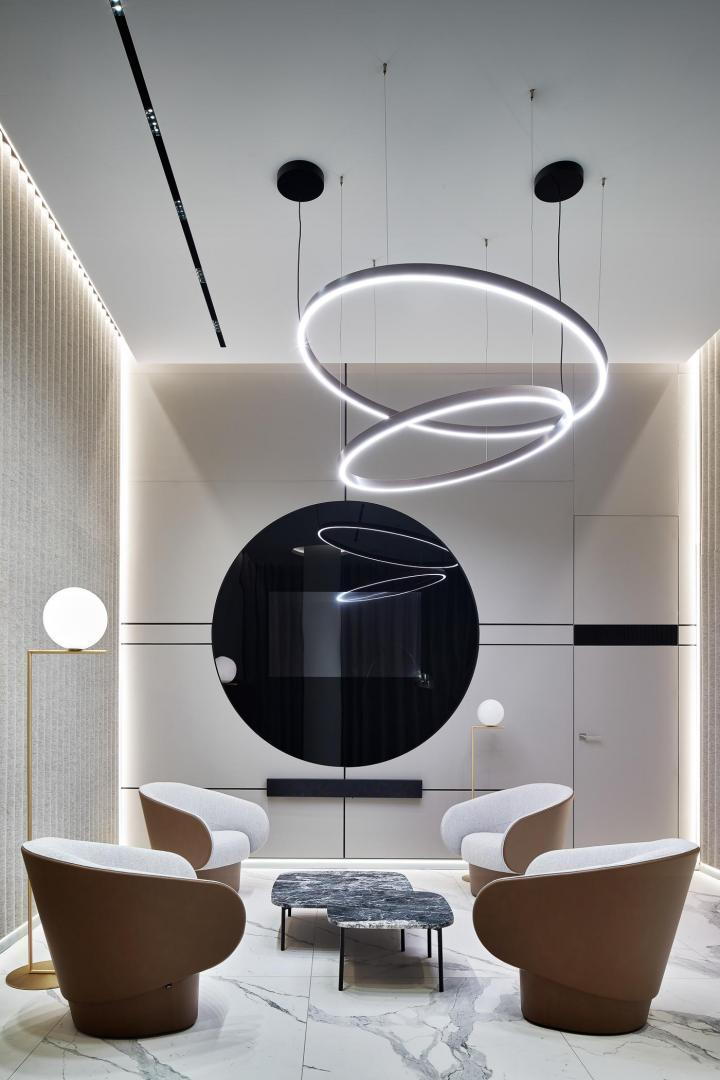 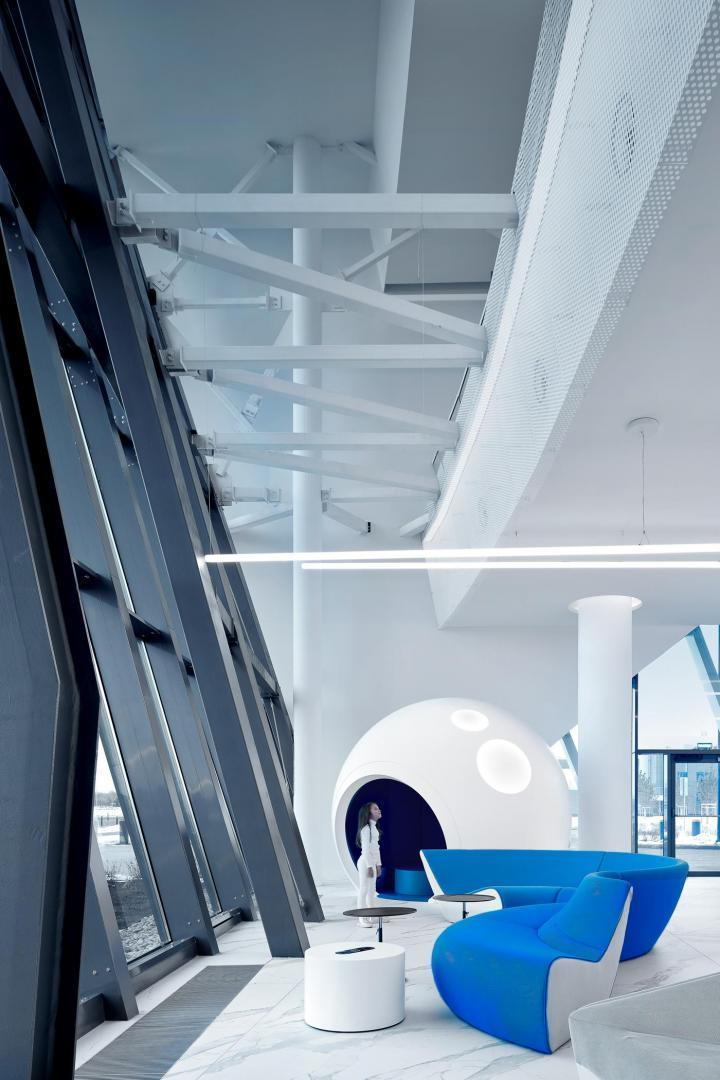 The VOX team not only did a stellar job on the VIP lounge aesthetic, but they also paid thorough attention to the practical elements. “Apart from fulfillment of applicable mandatory requirements, it’s also essential … to create [a] comfortable atmosphere and the feeling that the company truly cares about every individual passenger,” said Akhremenkova in an interview with Design Mate. “In particular, when designing the premises interior, we carefully considered the availability and location of electric sockets, since Wi-Fi access and the ability to freely use the electronic gadgets are highly important for the passengers…When the interior is well-designed even in such small details, then you will probably feel yourself calm and comfortable in such an environment.” 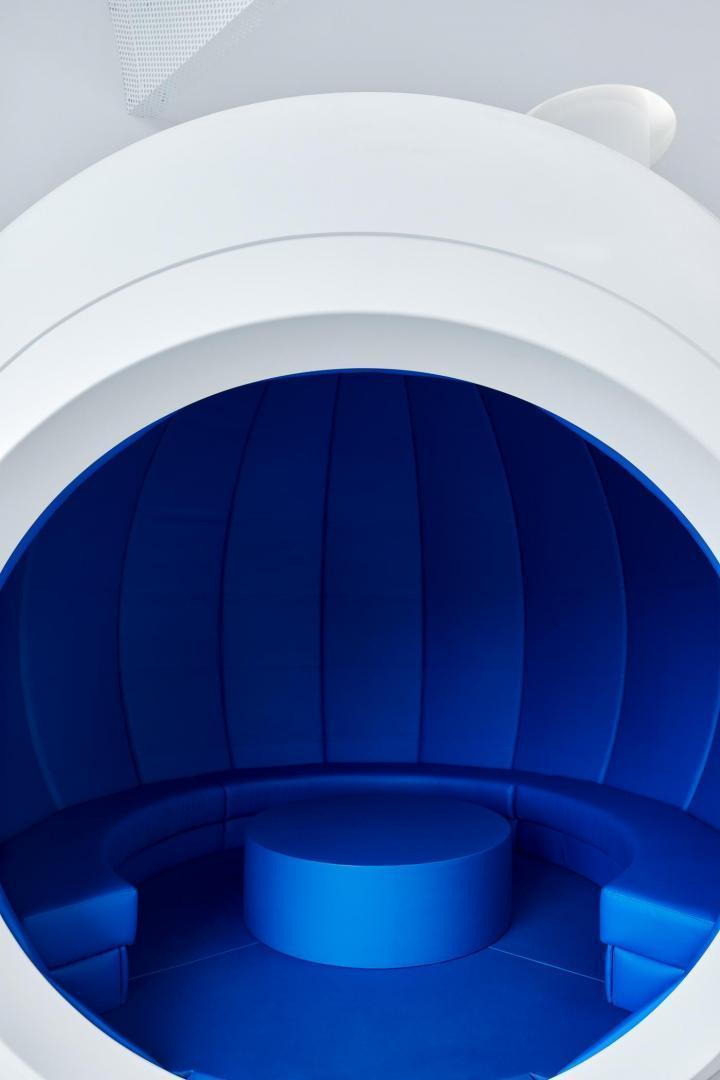 According to the company’s website, Vox’s philosophy is that “architecture and interior design are exercise[s] in the structural arrangement of space and rewiring the mind.” The firm has already completed several other Russian priority lounges, including The Horizon in the Platov airport, and they all exhibit the idea the idea that true architectural value manifests itself in “abundant space, infinity, openness, and freedom as a lifestyle.”