For centuries now, Victorian architecture has been renowned for its embellishments, sturdiness, and use of timeless materials like brick and stone. But one thing it’s not known for is an abundance of natural light. 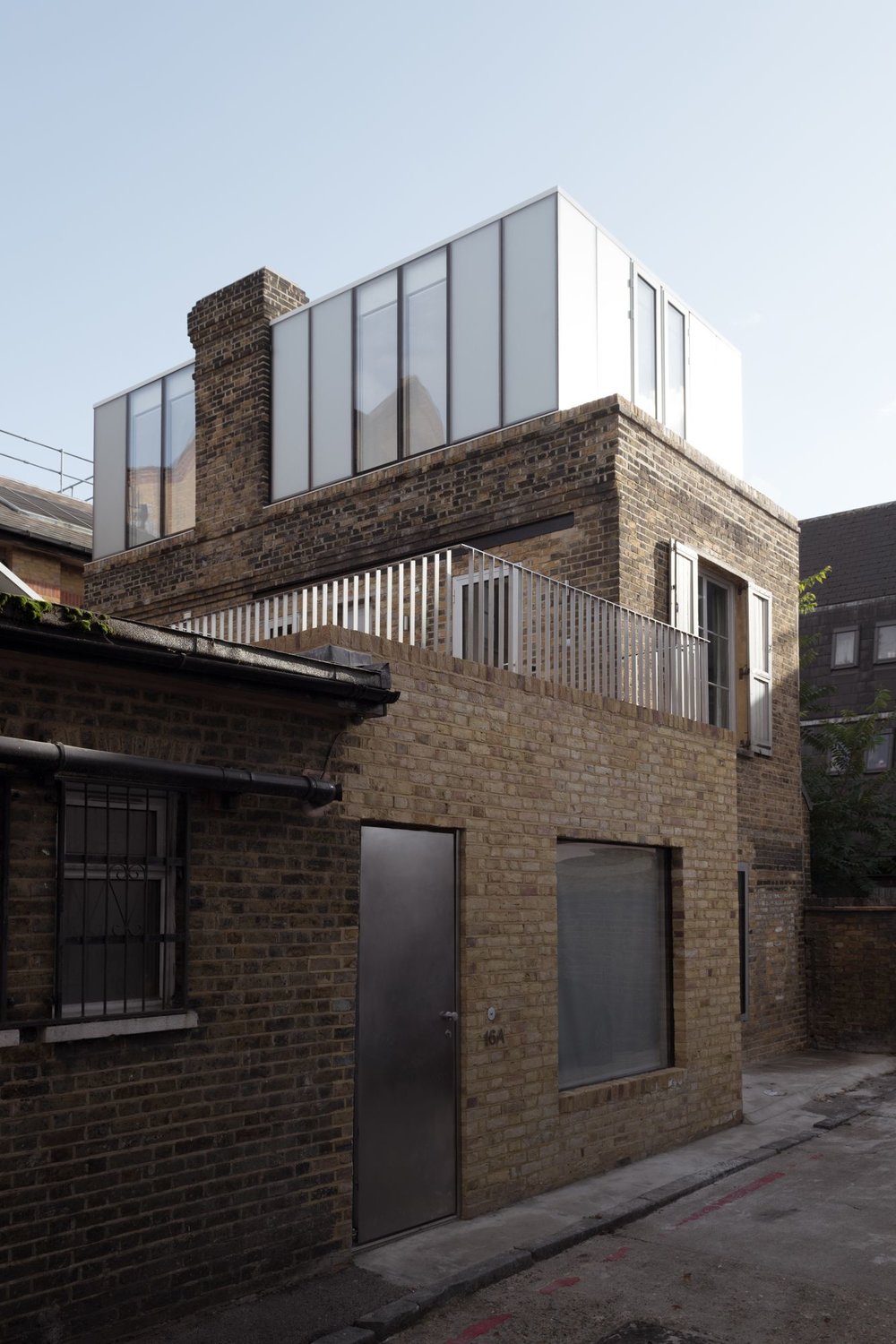 When renovating old buildings for contemporary use, some architects deal with this challenge by replacing the original windows with large expanses of glazing, or by knocking down nearly all interior walls. Ivo Carew, a London-based architecture firm known for its conservation-led projects, looked toward the sky instead.

“The Bakehouse” is an airy transformation of a 19th-century brick bakery on a quiet backstreet in London’s Peckham neighborhood. You don’t get a sense that the building has changed much over the last century until you look up, taking in a new translucent glass volume poking out of the roof. The architects say their goal was to preserve the “simple unostentatious grace of the building” while renovating it into a comfortable home for a client working in the music industry. 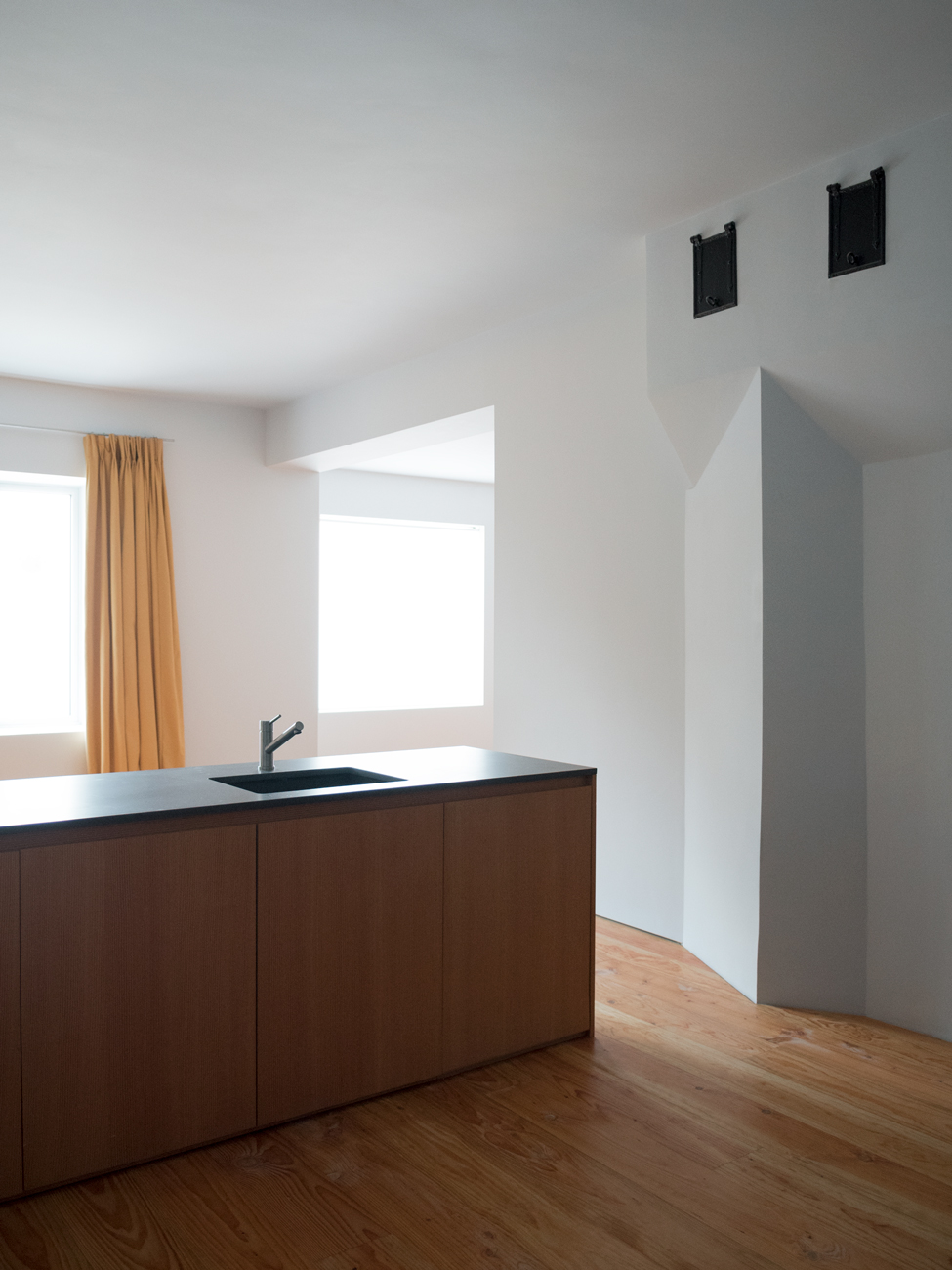 The unapologetically modern rooftop extension is clad with glass panels that flank a defunct chimney left over from the former bakery’s operations, adding a whole new set of rooms to the original structure. The box’s cloudy glass diffuses light from the outside and draws it inward, granting the interiors a much-needed glow. It’s exterior appearance alone  presents an intriguing contrast with the warm earth tones of the aged brick around it, but the addition’s interiors look absolutely nothing like what you might imagine a Victorian bakery to be. 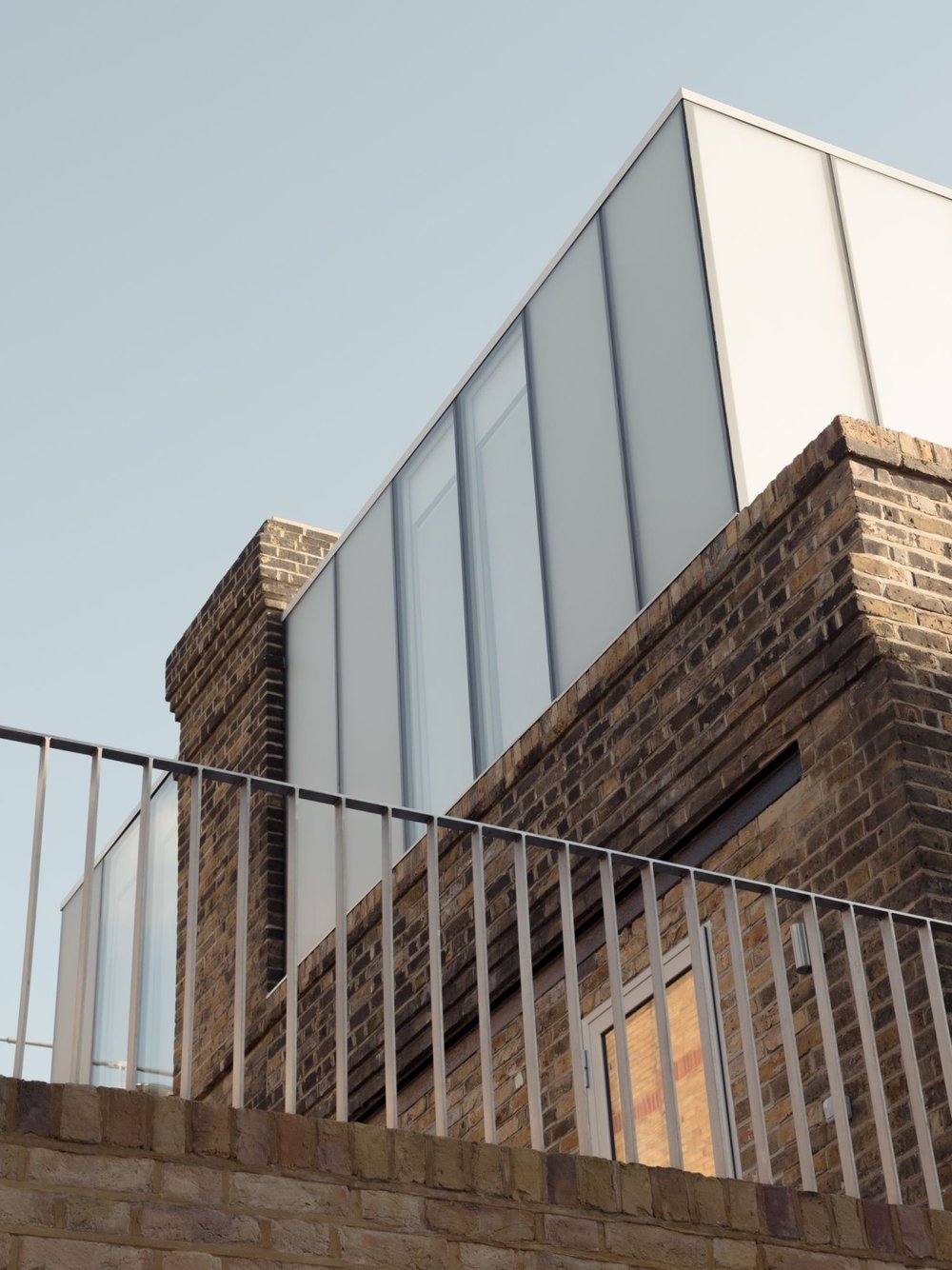 Starting with a material palette that would freshen up the brick without overwhelming it, the architects brought in tones of pale wood, dark limestone, Douglas fir floors, textural tiles in various shades of gray, and lots of white paint. Nearly all of the surfaces are new, though the architects did leave a brick wall exposed here and there. In line with their intentions, the result is unfussy, putting the focus on the quality of light that now streams in from spacious anodized aluminum windows. 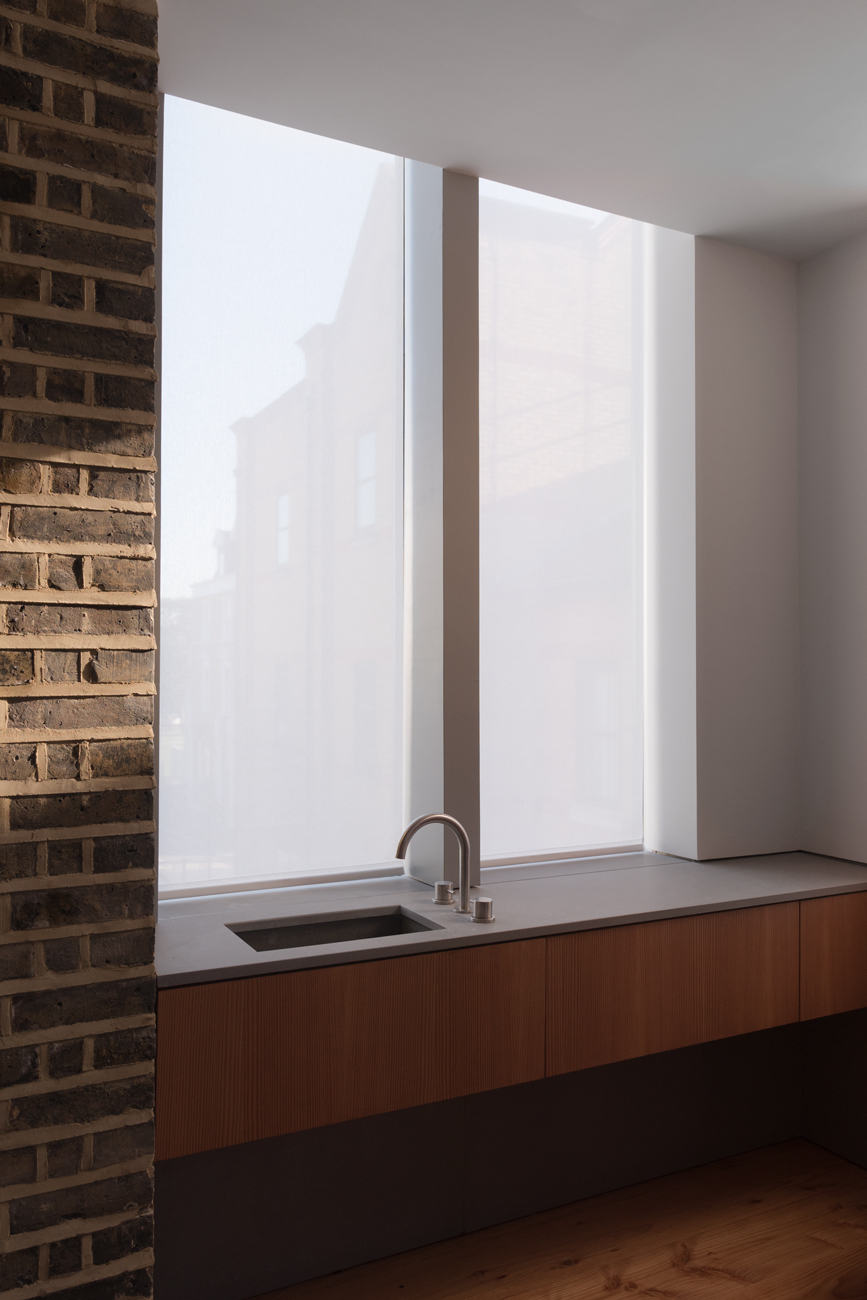 If you can’t spot a second extension on the building from looking at the photos, then the architects have truly succeeded in their design. They intentionally used new yellow stock bricks (handmade in London) to blur the boundaries between old and new on the ground floor addition, along with a frameless square window. This extension creates an L-shaped living area comprised of a kitchen, lounge, and dining room, while stairs lead to the two upper floors. 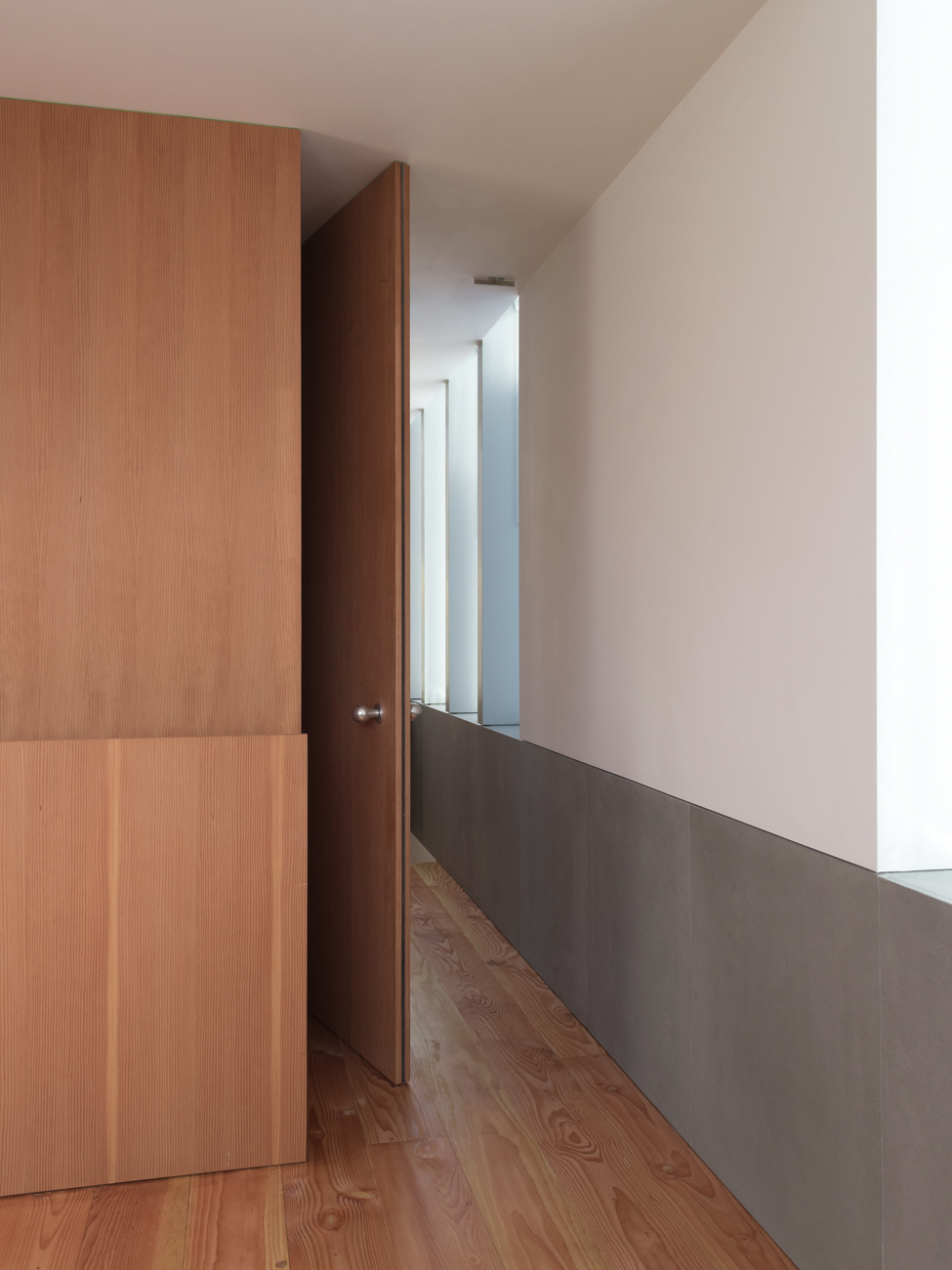 Ivo Carew hopes the result will help temper the growth of the Peckham area during a period of rapid change. While the modest neighborhood was traditionally home to families and students in the past, the arrival of a new Campari bar, a multi-story parking garage, and a train line linking Peckham to east London have led to an influx of young professionals. 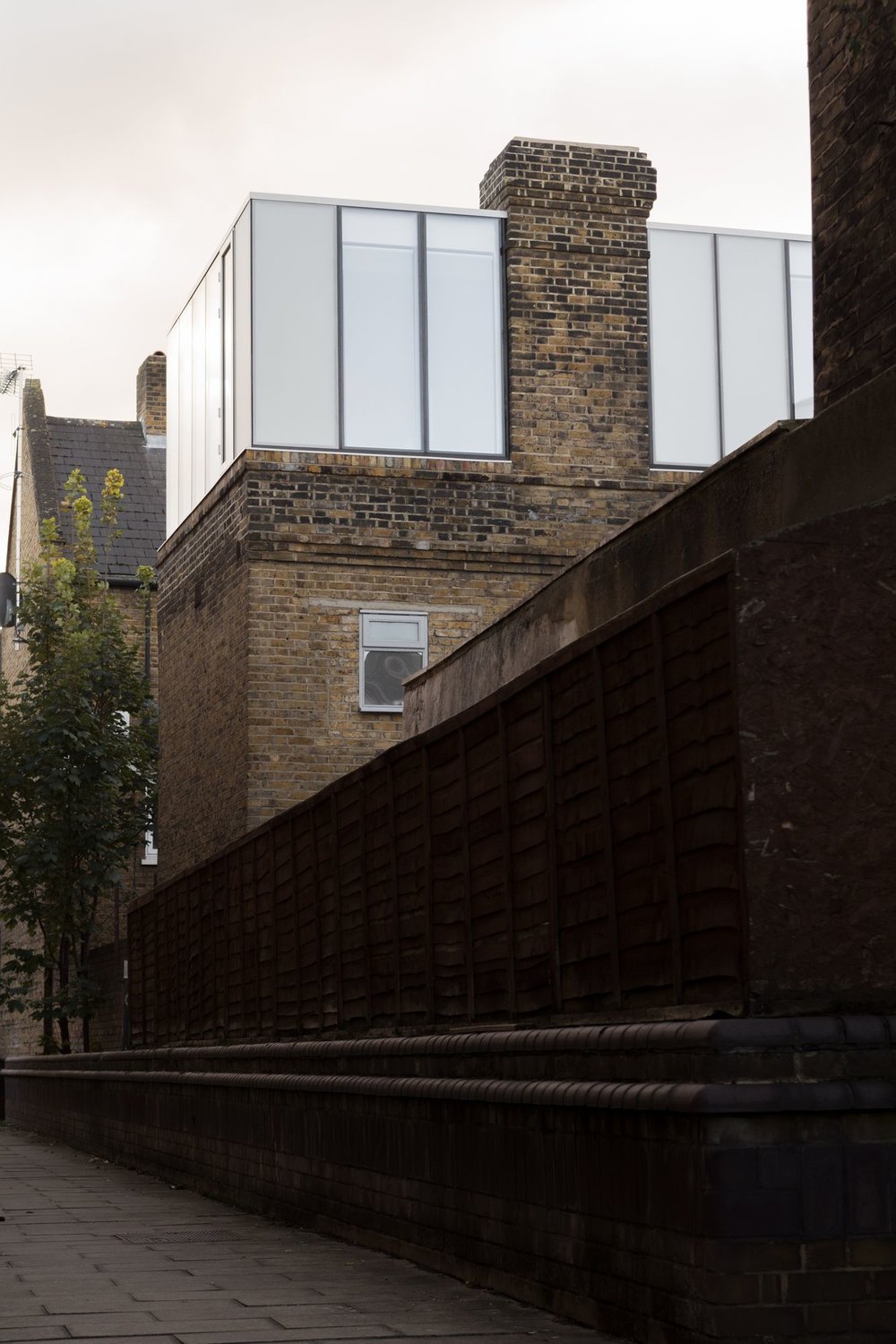 “We have designed a number of new art spaces and studios nearby and another one will be beginning shortly. These projects required converting redundant industrial buildings into dynamic spaces,” Carew told Domus. “It is really important that building projects in Peckham continue to take an idiosyncratic approach and resist large-scale commercial development. This is the best way to maintain the vitality of the area.”