Gaming culture has evolved so much since the 1980s, we can now fit thousands of titles on pocket-sized devices and play them anywhere we go. But that doesn’t negate the nostalgic appeal of retro arcade games, whether you were old enough to enjoy them in their heyday or not. 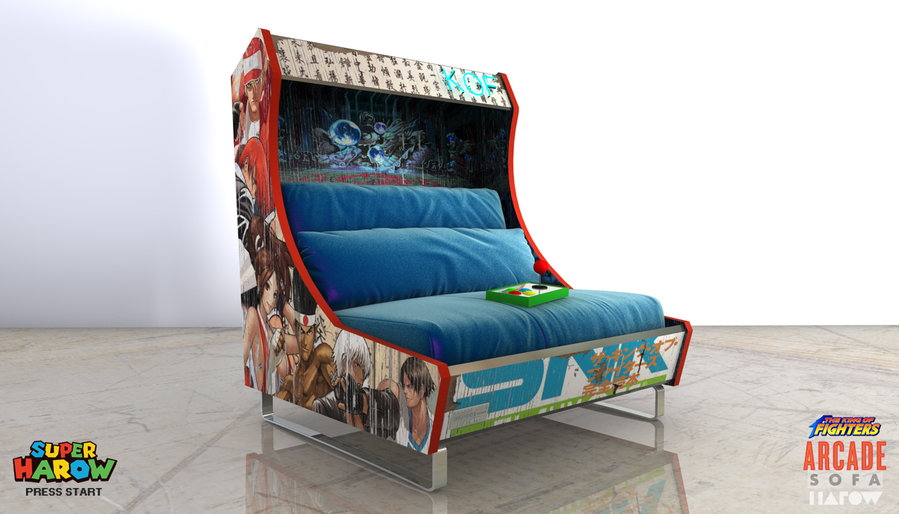 The physicality of the experience is a big part of what makes arcade games so fun, like the feel of your hands on the controls, the bucking and jerking of the chairs, and all the lights and sounds flashing and reverberating through the arcade. Competing against other players in person can be a lot more satisfying than playing virtually, too. But arcades are getting harder and harder to find, so recapturing that feeling isn’t easy. 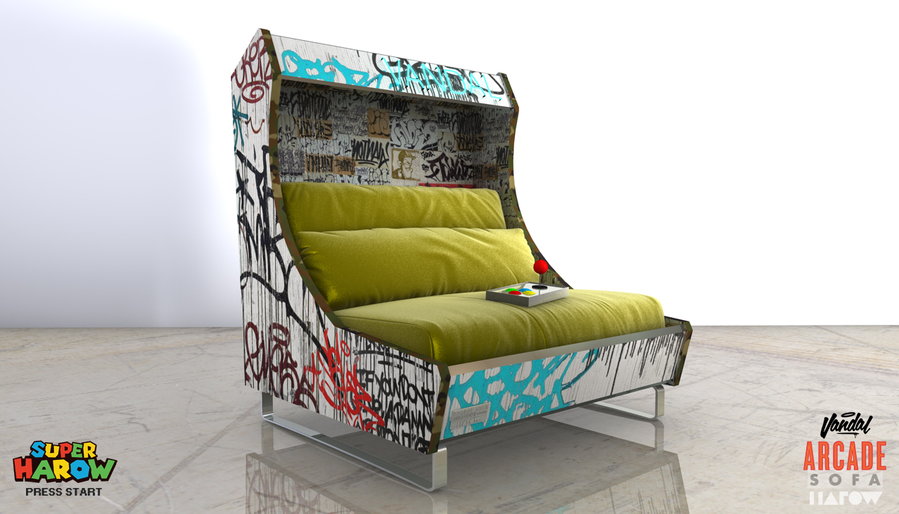 Some gaming enthusiasts might go so far as to purchase old arcade games to play at home. If that’s going a touch too far for you, French artist Harow has another idea: replacing your sofa with the “Arcade,” a couch designed with the aesthetics of arcade games in mind. Available in a collection of 21 themes, the Arcade Sofa takes the classic shape of an arcade machine and turns it into an enclosure for a two-person lounger, perfect for bringing a little retro flair to your contemporary gaming experience. 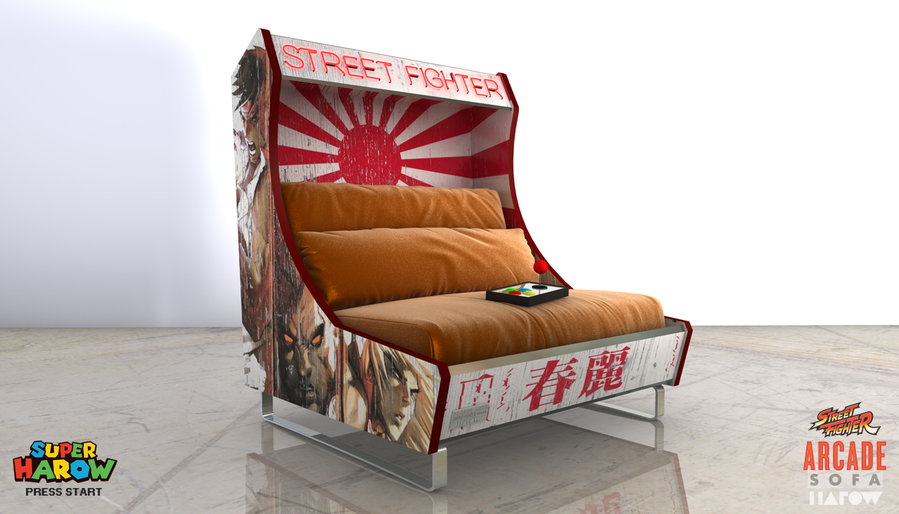 Arcade enthusiasts will recognize some of the characters featured in each design. “Street Fighter” is among the most obvious and iconic, complete with a neon sign across the front and characters’ faces painted on the sides. “The King of Fighters” is another one, similarly enveloping you in the game’s visuals, which are augmented by turquoise upholstery on the cushions. Others make references to Dragon Ball, Jurassic Park, and kids’ games and characters like Pokémon and Hello Kitty. 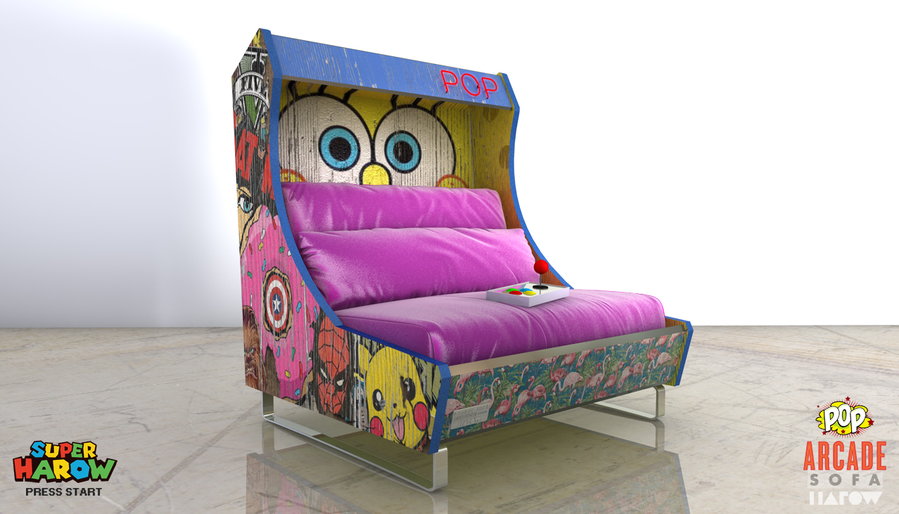 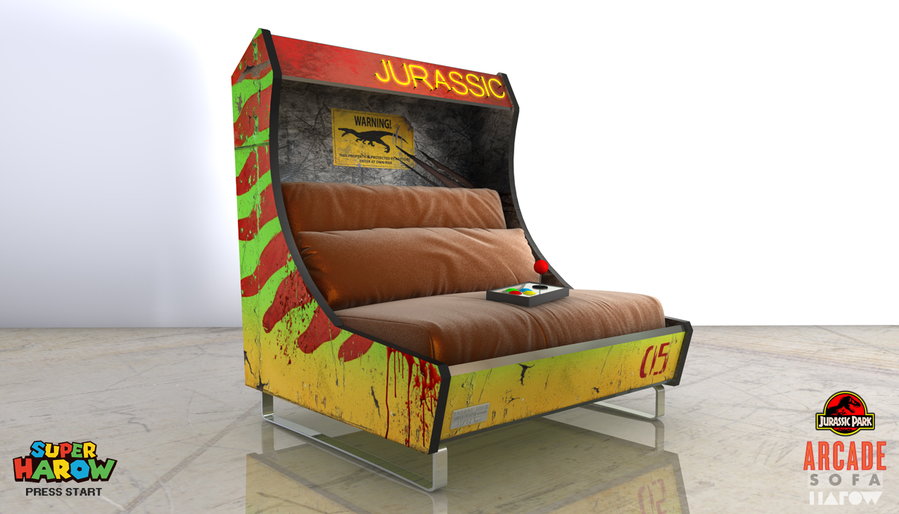 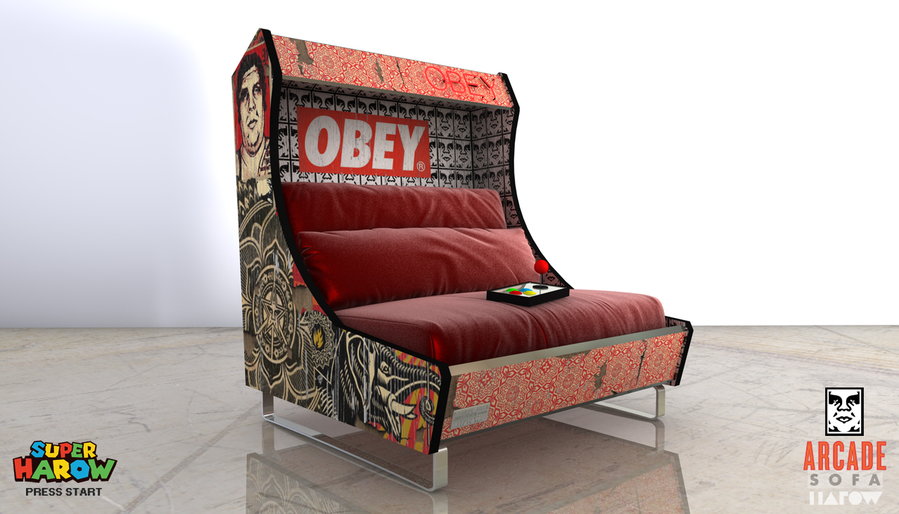 Some of the Arcade Sofas are a little more loosely themed, like the Supreme, Obey, “Vandal” graffiti, and eco-friendly versions. They’re all made of recycled wood, steel, and velvet, and Harow will create custom sizes and configurations on request. If only this sofa had built-in speakers and lighting, it would be perfect, but that’s not too hard to DIY after the fact. You should also check out some of Harow’s other designs, which are equally noteworthy. A skull-shaped armchair, a Sputnik-inspired chair, and the Apollo 11 moon crater table are particularly cool. 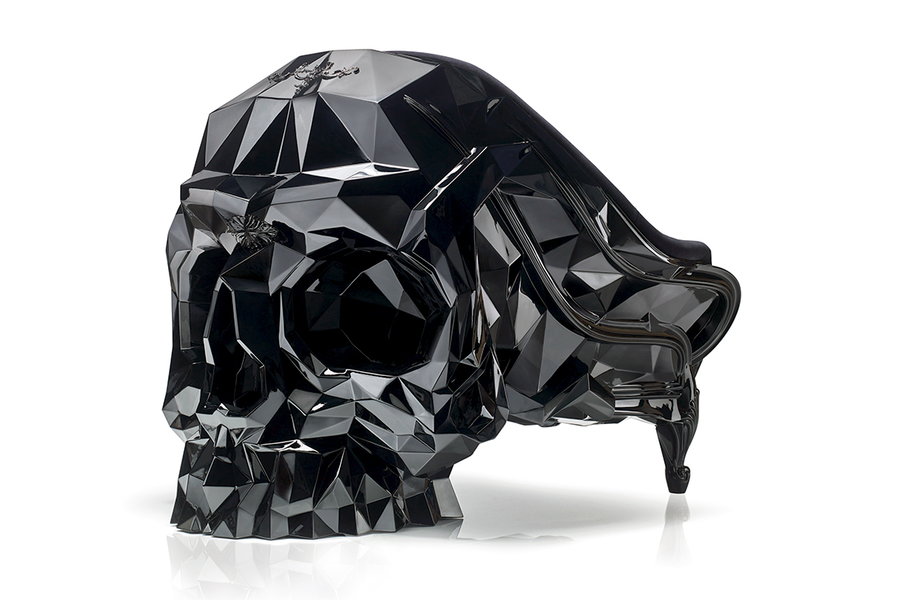 The artist’s website explains: “From street art to tattooing, passing through screen printing, sculpture, and graphic design, Harow is a French artist who grew up in the 90s. Belonging to the last generation of 20th Century Fox kids, he is rocked by movements such as Cyberpunk or Pop Culture at its peak. With his mind always in effervescence, his attractions are linked to his childhood, from dystopian anime to space adventures, from Errò’s frescoes to Hirst’s skull, his overall state of mind is enlightened by the indelible images of this century.” 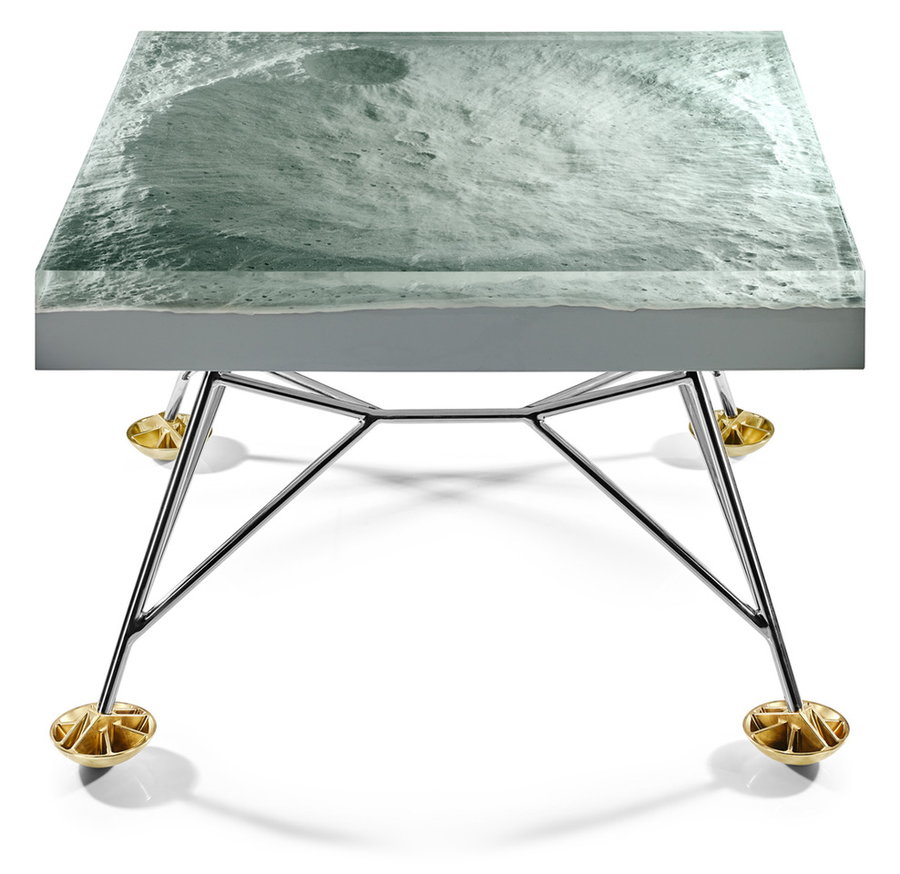 “Spending most of his time exploring all forms of art, Harow is a self-taught artist who stimulates his creativity daily. He approaches his work primarily from a perspective of recontextualization through strong aesthetic symbols. His philosophy is not to follow any trend but rather to consider each project without limit of design, the difficulty of making is an integral part of the creative process. Visually stunning, his works are described as sophisticated and brutal. They are distinguished by a balance between chaos and order, which makes them simply unforgettable.”