Why should big cities have all the fun? People living in poor and isolated rural settings deserve access to nice things, too. 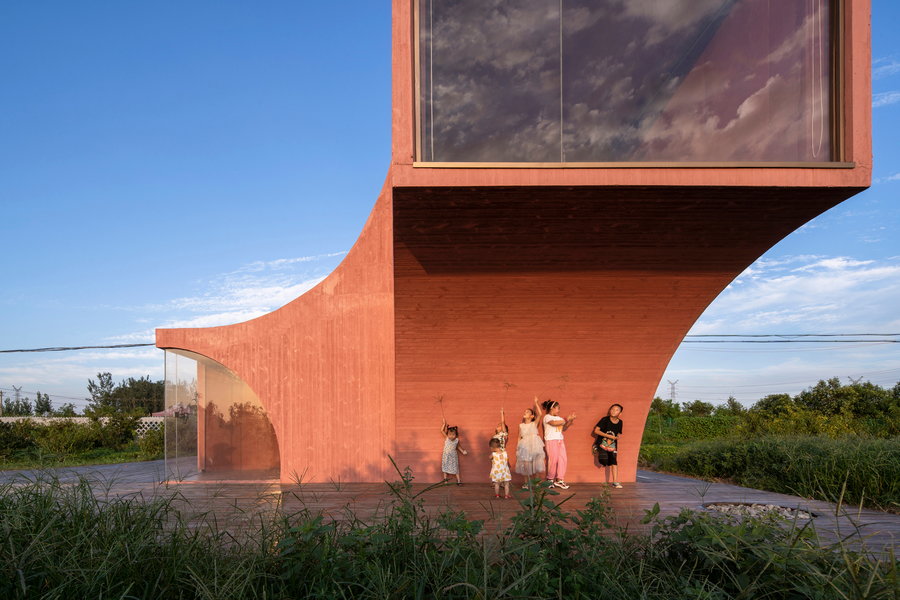 In the Henan province of northeast China, local authorities initially wanted architecture firm Atelier XI to build a single large cultural facility in the area’s largest town, Xiuwu, but the architects had a better idea. In place of one 3,229-square-foot arts and culture center, they’d split the project into a series of miniature facilities in different rural locations. The province agreed, and “Peach Hut” is the first of those pavilions to be completed.

Set in the village of Jiaozuo, near the northern bank of the Yellow River, “Peach Hut” rises from an orchard of peach trees, with one glass-clad facade cantilevering over the greenery. The combination of the building’s unusual modern geometry and cheerful color contrast with the farmland surroundings, and make it look sort of like a sentient creature from an animated film that could suddenly stand up and start walking around at any moment. Needless to say, modern architecture is rarely seen in settings like this, much less structures this bold and playful. 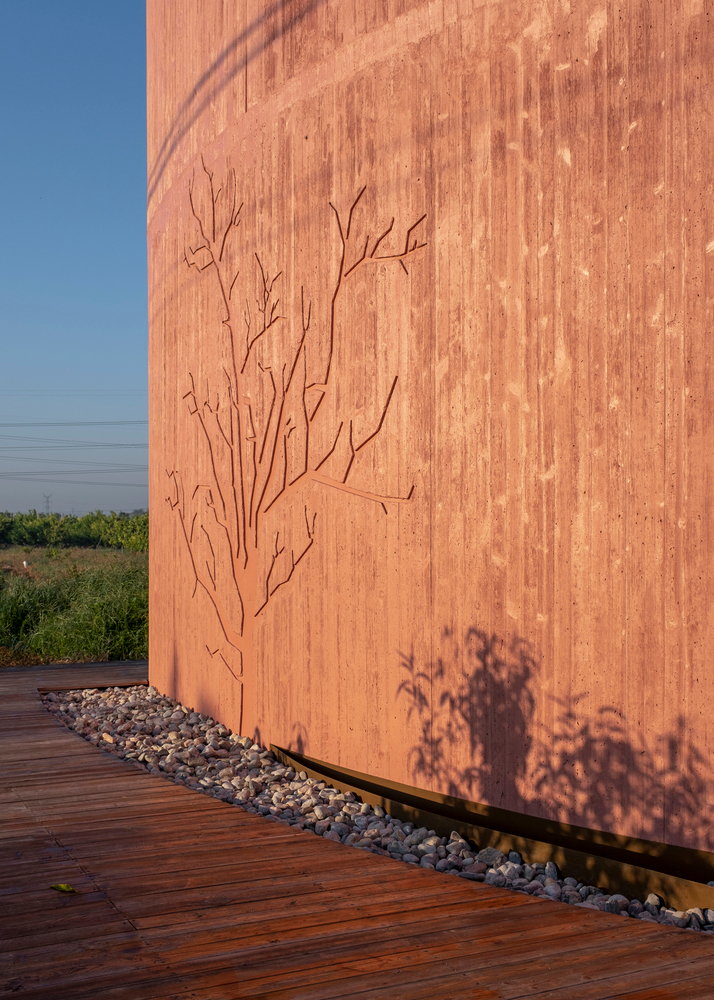 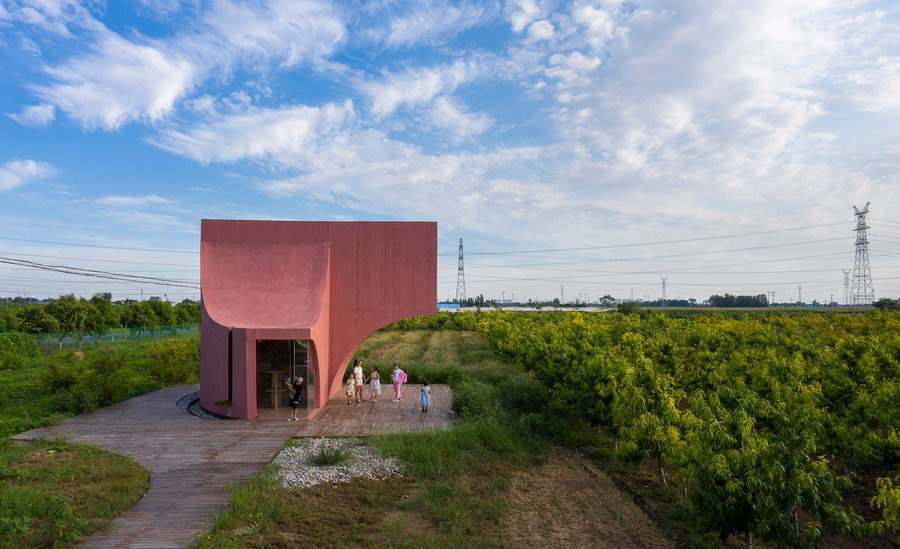 The building’s curved silhouette was achieved with cast-in-place concrete, with the texture of the formwork still visible on the exterior walls. The shape of “Peach Hut” also takes inspiration from the twisting shapes of local trees, which all tend to lean to one side.

“[We] envisioned that the building is cut from a series of invisible arcs derived from the earth and the clouds, forming a unique shape that rises to the sky,” explains the firm. “In the Peach Hut, all windows are of diverse shapes, responding to different views and light angles: the large floor-to-ceiling window on the second floor allows viewers to jump over the peach trees and overlook the panoramic view of the farm; the round window frame on the south side rotates along the central axis, and captures dynamic imageries of the orchard under the subtle variation of daylight; the vertical windows at the corners lengthen the depth of field from the orchard to the village at far; the shadow [created by] the skylight changes at every moment; and the entrance corner window is made as a quarter circle resembling the stooped peach trees, thus resonating with the picturesque land.” 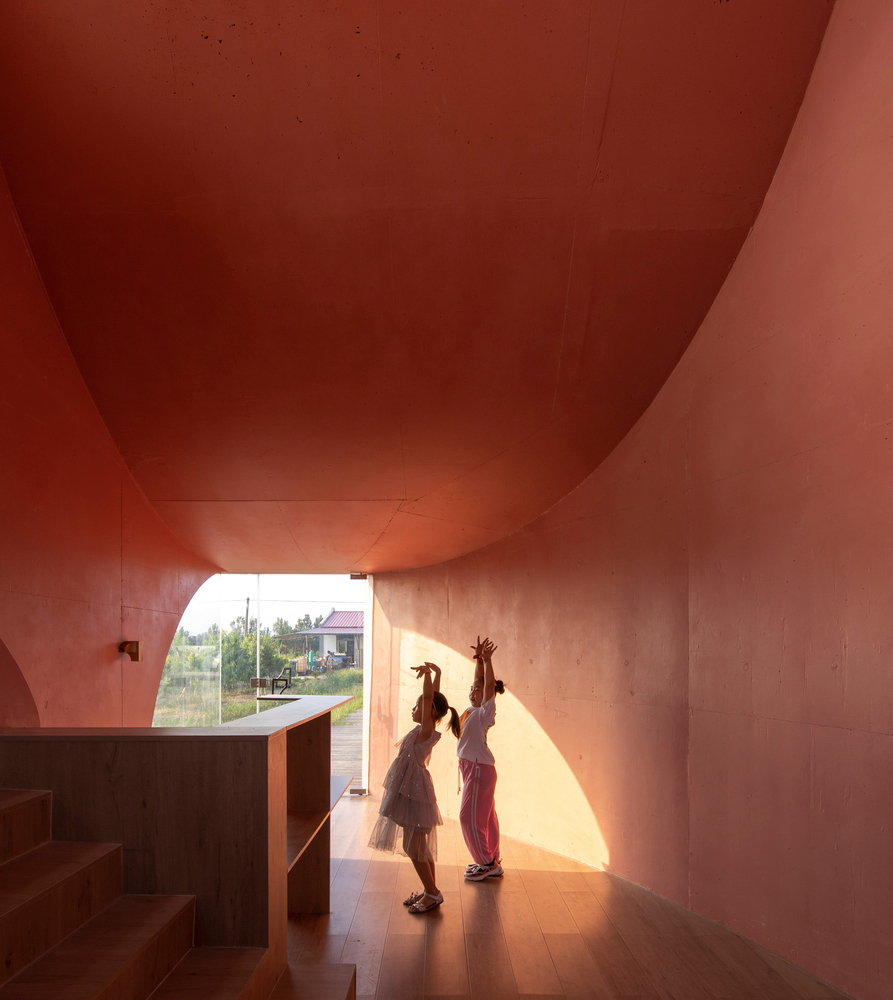 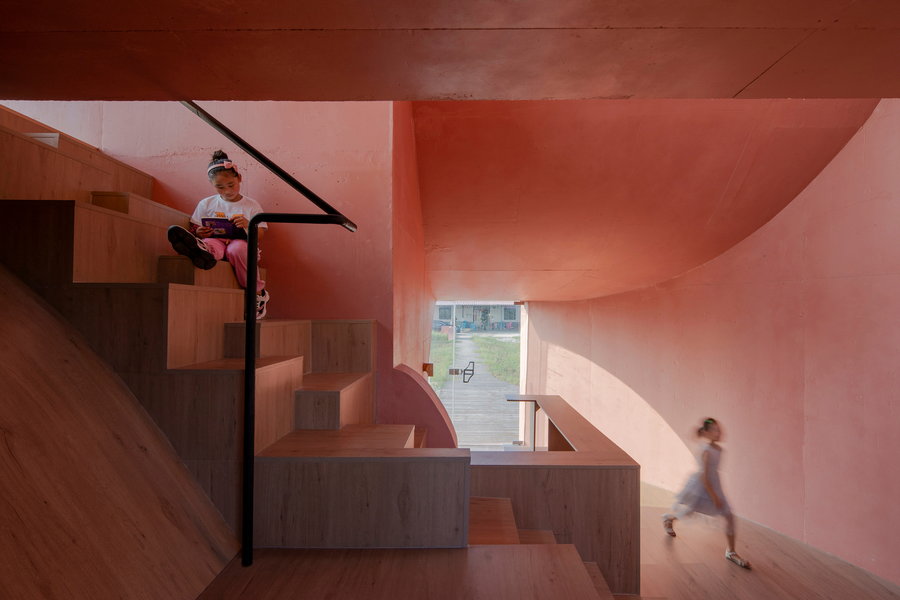 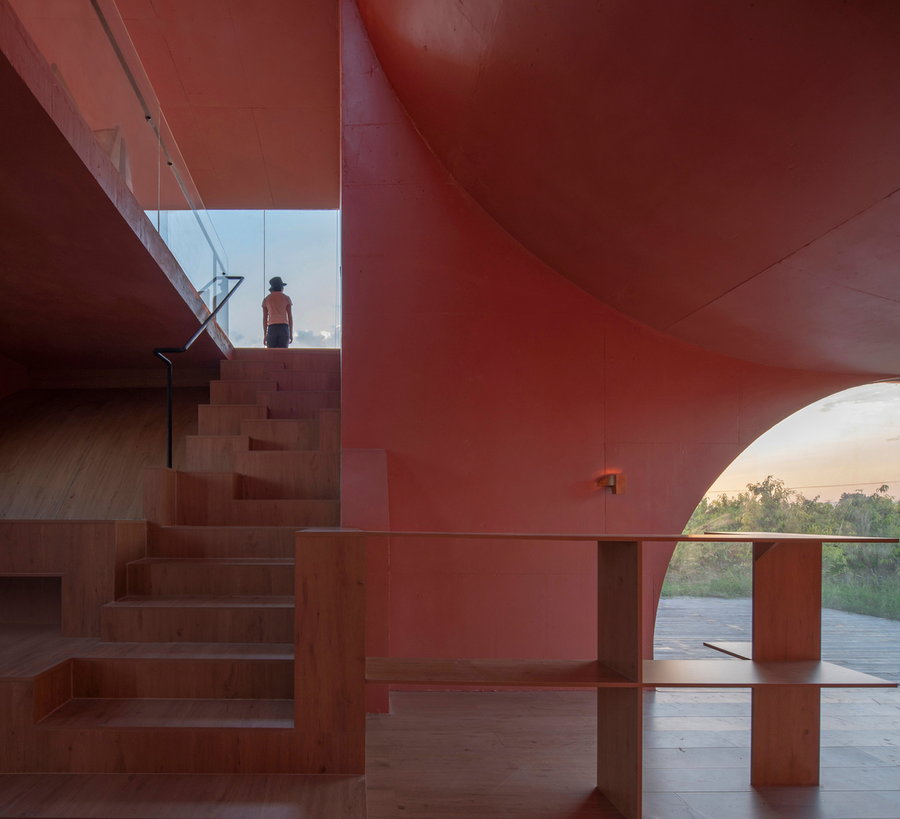 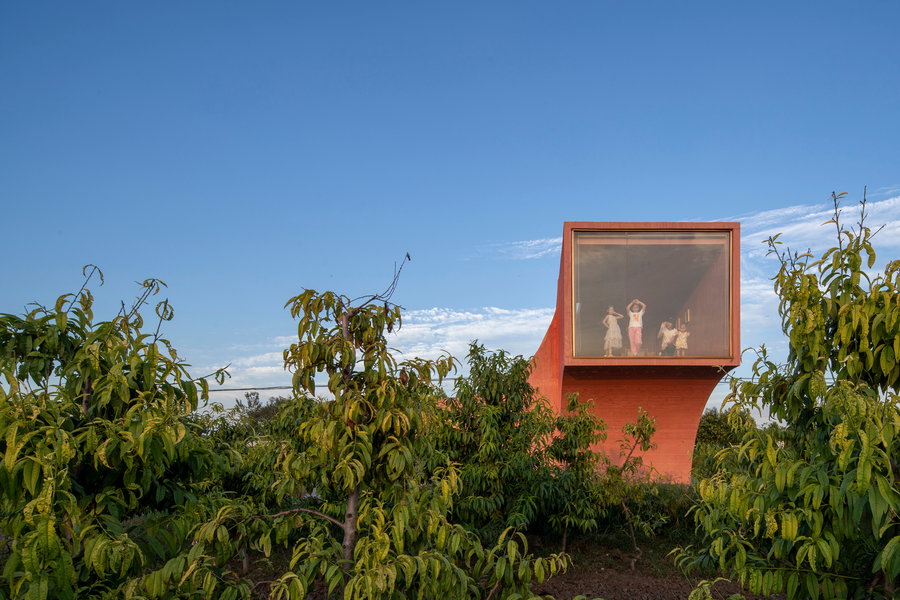 Acting as a community center and beverage bar, the observatory hut gives local residents a place to gather and take in the views. The other six pavilions planned for the province will be built over two construction phases, including the “Periscope” (a vernacular theater) and “Bent House” (a communal library). 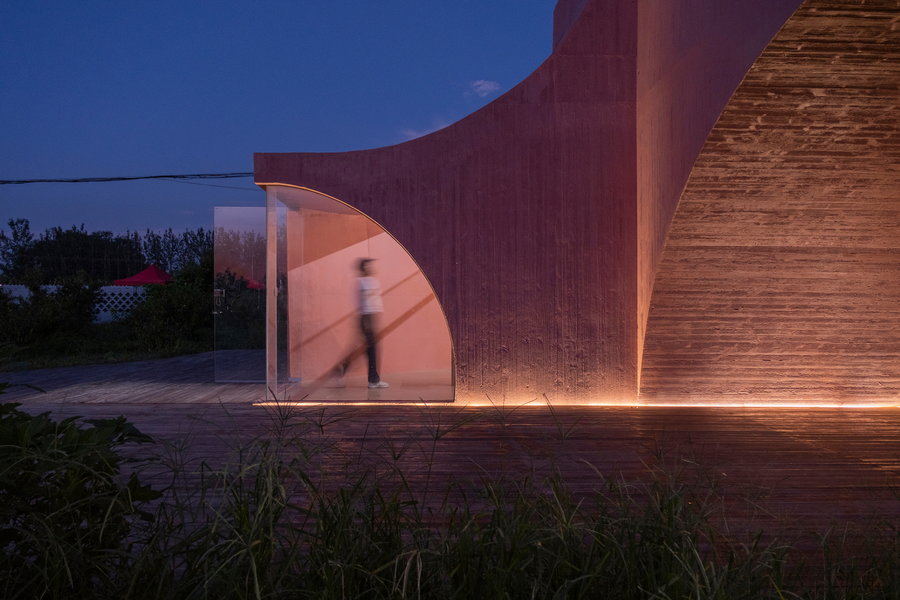 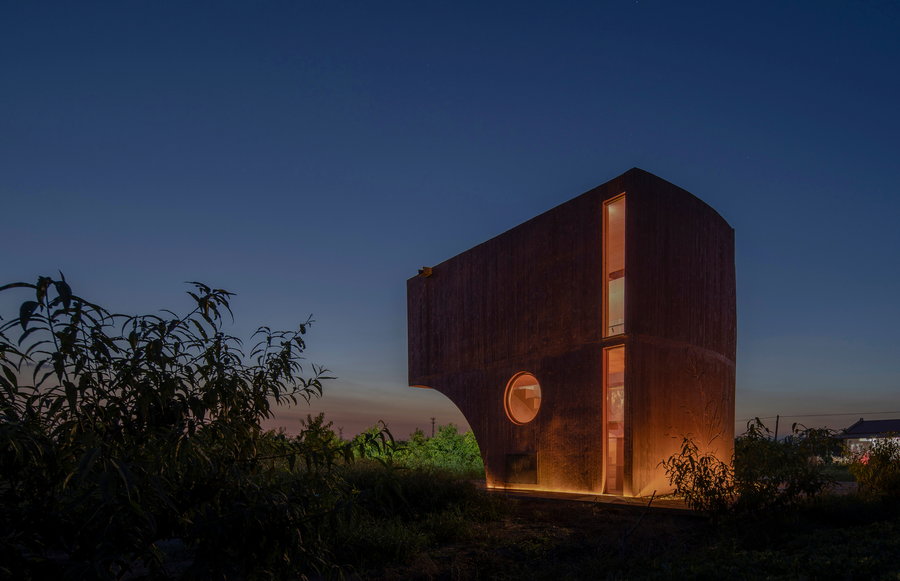 The architects add that “these cast-in-place concrete miniatures are interpreted into a series of tree-shaped spaces with tentacles reaching out for the sky, bathing in light and shadow. Their locations vary from fields to woods to mountaintops, and their forms differ as well: while one grows out from the ruined walls in an abandoned village, another embodies a floating theater on the water.”

The project aims to address inequalities between urban and rural areas that resonate far outside China’s borders. People living in remote areas tend to lack sufficient access to information and educational resources, let alone the type of cultural attractions that you’d find in more populated areas. 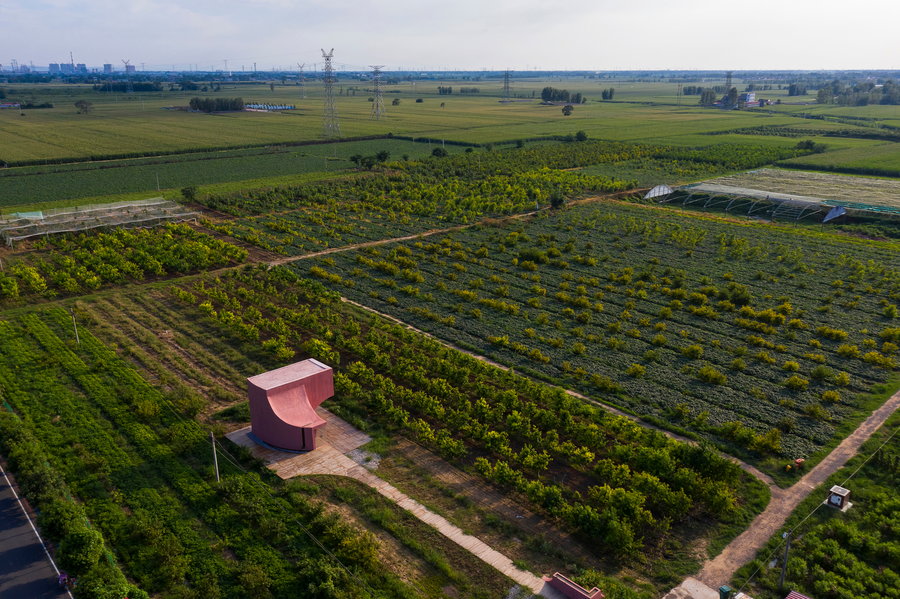 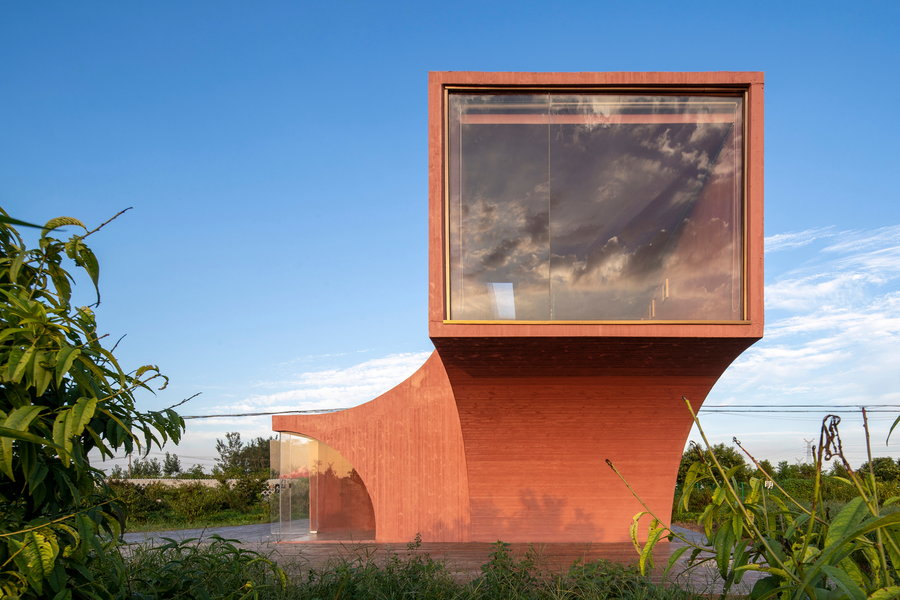 “Through these minimal architecture investments, the project aims to inspire sensibilities of local residents, to help them enjoy and rethink life quality, as well as to alleviate isolation and poverty.”