After former President Trump’s 2017 inauguration, the White House underwent a $3.4 million makeover, with Trump claiming former President Barack Obama left the building “a real dump.” President Biden has had no such comments about Trump’s recently vacated administration, but perhaps the $500,000 deep-clean he ordered speaks louder than words. 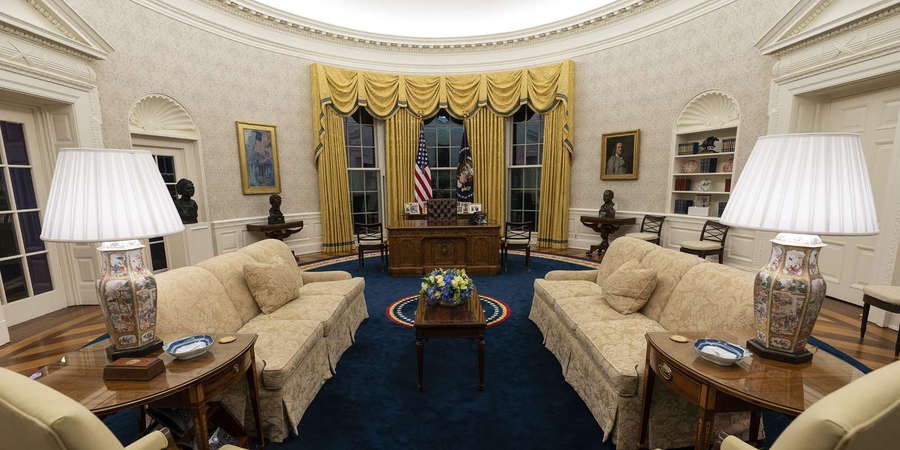 As usual when the White House changes hands, the Biden Administration immediately got to work refreshing the Oval Office decor, looking through the White House archives and borrowing artwork and artifacts from museums and galleries around the country. This time around, a few clear themes emerged: a return to tradition, a little more diversity, and a nod to the new administration’s reverence for science.

A Painting of Benjamin Franklin 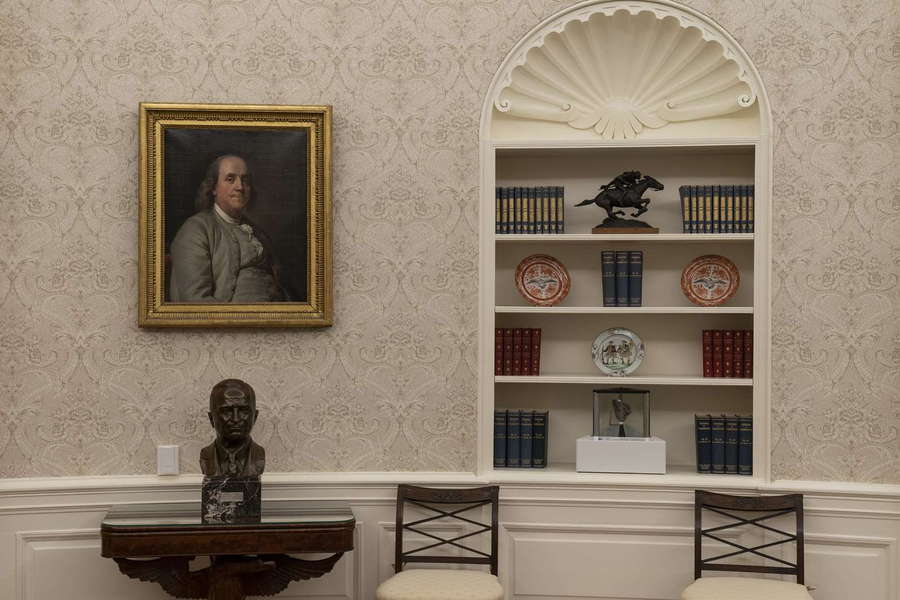 Bye-bye Andrew Jackson, the slave-owning U.S. President responsible for travesties like the Trail of Tears. His portrait, chosen by Trump, has been replaced by a painting of world-renowned scientist and founding father Benjamin Franklin. Other newly displayed paintings include portraits of the famous rivals Alexander Hamilton and Thomas Jefferson and a flag-themed 1917 painting by Childe Hassam last seen during Obama’s tenure.

President Biden has removed the Diet Coke button. When @ShippersUnbound and I interviewed Donald Trump in 2019, we became fascinated by what the little red button did. Eventually Trump pressed it, and a butler swiftly brought in a Diet Coke on a silver platter. It's gone now. pic.twitter.com/rFzhPaHYjk

Biden could have chosen from six Presidential desks, and speculators thought he’d go for the Chesapeake & Ohio Railway desk formerly used by George H.W. Bush due to his love of trains. But surprisingly, the Resolute Desk (also used by Barack Obama) is one Trump choice that remains. What he did get rid of, however, is the red button on a fancy little hardwood box that Trump used to summon a butler with a platter of Diet Cokes.

Many of Trump’s choices reflected his desire to “bring back the luster and the glory” of the office, including the bright and shiny gold drapes behind the desk. President Biden stayed in the same color zone but selected darker, more toned-down yellow drapes first installed by the Clinton administration. Biden also replaced the beige starburst rug designed by former First Lady Laura Bush with a royal blue rug from the Clinton years.

Another major Oval Office upgrade: A bust of labor organizer Cesar Chavez where Fred Trump used to be https://t.co/5MQiVkwLSs pic.twitter.com/zAjY8peG5z

Civil rights icons have found places on the sideboard and beneath Franklin’s portrait, including busts of Latin American labor leader and folk hero Cesar Chavez (borrowed from the Cesar E. Chavez National Monument in California, and replacing one of Trump’s father), a bust of the Reverend Martin Luther King Jr., and a bust of Rosa Parks.

The British tabloids are in a frenzy over the administration’s choice to remove a bust of former British Prime Minister Winston Churchill, replaced with one depicting former President Franklin D. Roosevelt. Other new additions include a statue of an Apache rider on a horse, formerly owned by late Hawaii senator Daniel Inouye, and a bust of Robert F. Kennedy. 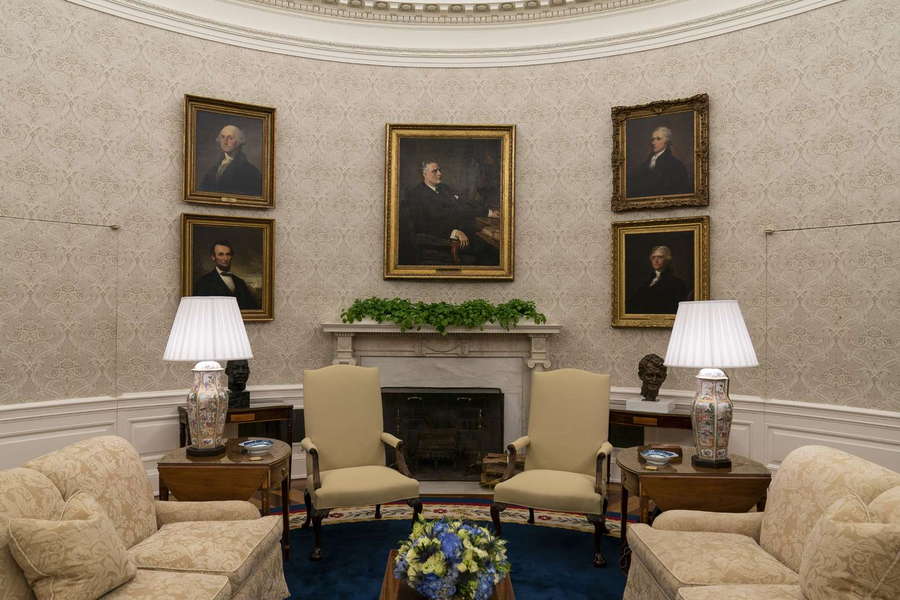 Displayed on a bookshelf beside the Resolute Desk is a moon rock in a protective case, which came from the United States’ last mission to the moon in 1972. Loaned to the White House by NASA “in symbolic recognition of earlier generations’ ambitions and accomplishments, and support for America’s current Moon to Mars exploration approach,” according to NASA’s website, the gray, diamond-shaped rock was procured by special request. President Biden reportedly wanted the rock “as a reminder of the ambition and accomplishments of previous Oval Office occupants.”

All images courtesy of AP