Boerum Hill is one of Brooklyn’s oldest neighborhoods, once part of the original Dutch settler town of Breuckelen. In the 1960s and 70s, the area fell on hard times, and many of its old buildings were slated for demolition, including beautiful 19th-century gems like its neoclassical former New York Times printing plant. Determined to save their community, residents banded together and established a neighborhood association. The printing plant is now a public school thanks in part to their efforts, and other old industrial structures in the area have since been taken over by artists as their homes and studios. 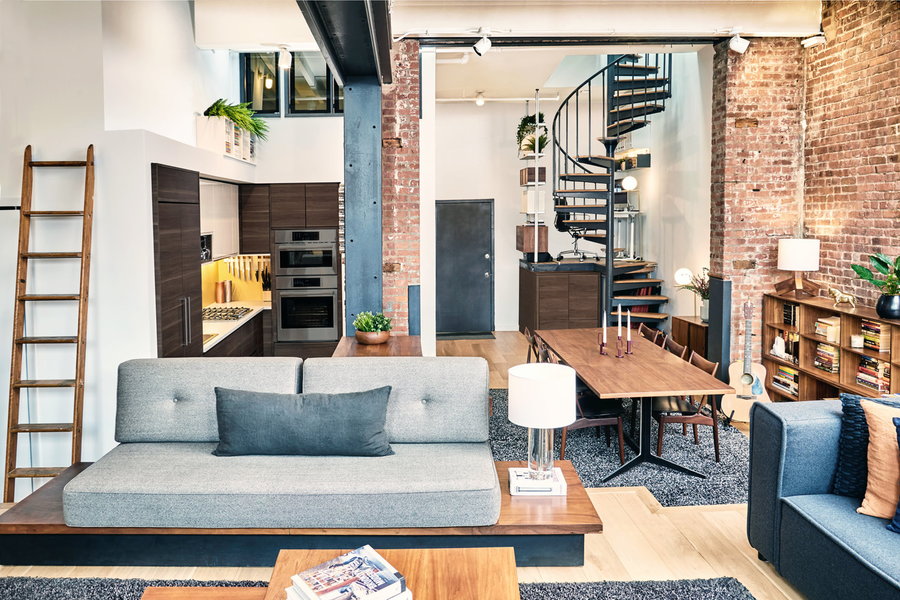 Back then, you could buy a brownstone for a mere $20,000. A lot has changed in the 50-plus years since, not the least of which is the neighborhood’s affordability for artists. One deteriorating paper factory that was turned into makeshift artist apartments in the 1980s is now in the process of being renovated into full-fledged luxury apartments, including architecture firm OSSO’s Boerum Hill Loft. 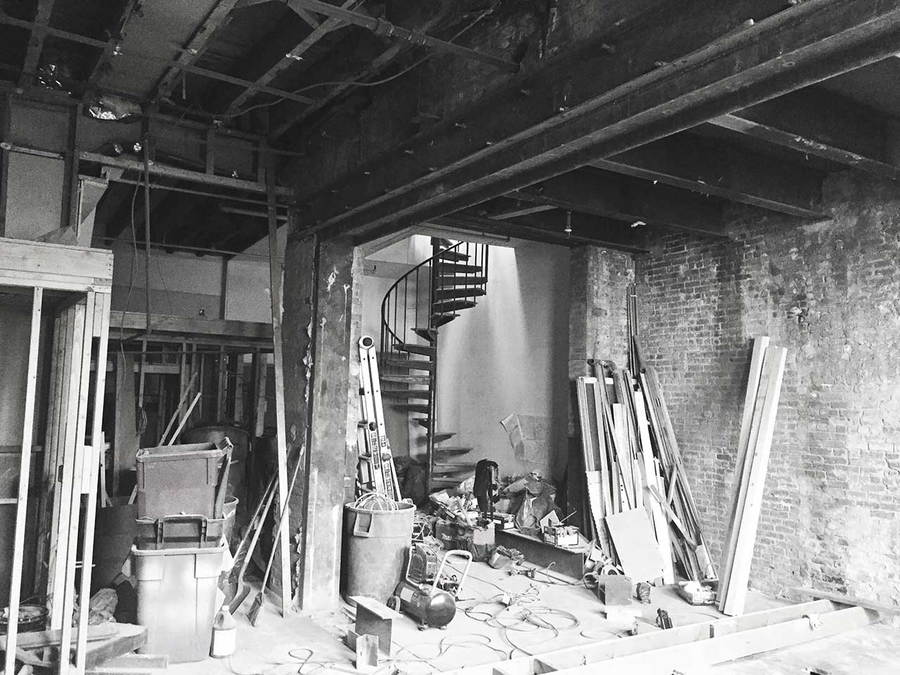 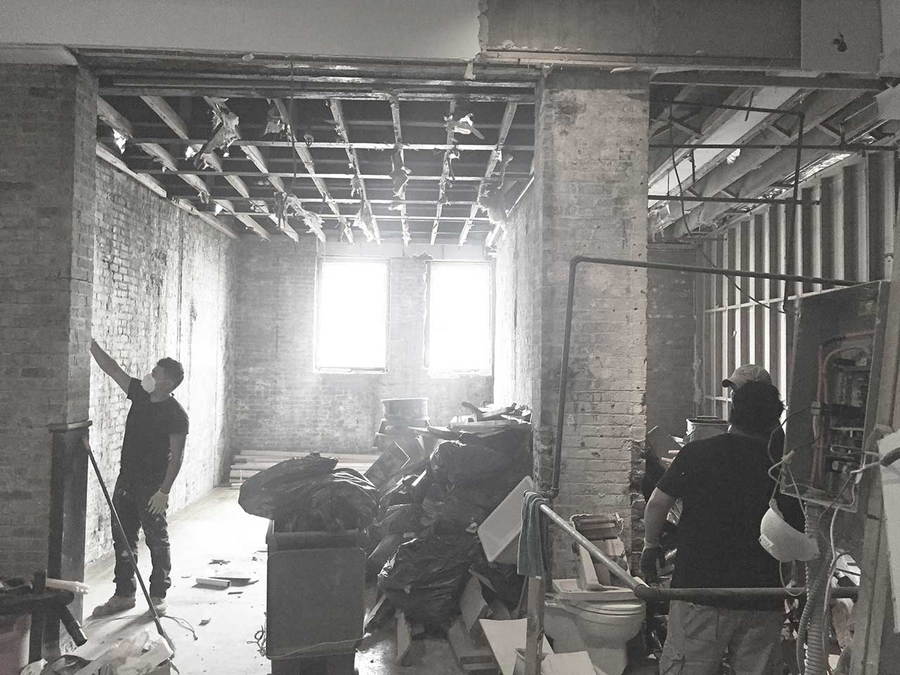 As you can probably imagine, after decades of industrial use, abandonment, and then reclamation as gritty studios, the building already had a lot of character, but it also needed a lot of love to elevate it to modern standards of living. The client, Google executive Malik Ashiru, had a vision for the space that would require completely gutting it. While he waited for the city to review the permits, Ashiru took a sabbatical from work, traveling all over Africa, Europe, and Asia.

“The moment they told me the approval was almost done,” Ashiru told Dwell, “I was on an airplane back.” 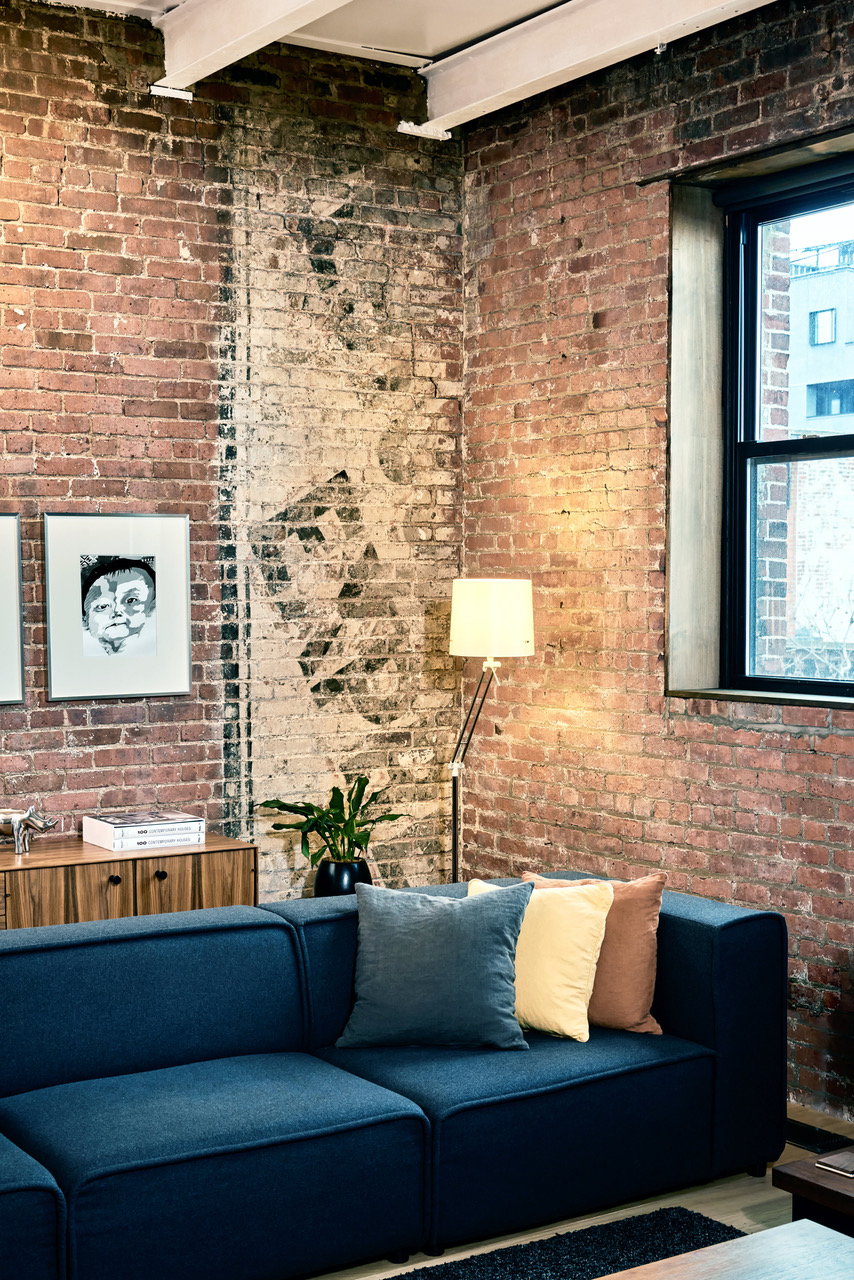 The firm decided to keep as many original elements as they could, including exposed brick walls with old painted signs still visible in some areas and a striking black metal spiral staircase. In before-and-after photos of the loft renovation, you can see how OSSO’s new walls, floors, and other surfaces augment the space without significantly changing its historical feel.

One load-bearing brick wall was removed to open up the living area, replaced by a massive steel beam that’s become the standout feature of the room. There’s also a step up into this slightly elevated space from the adjacent dining room and kitchen, taking advantage of the three generously sized windows on the front wall. 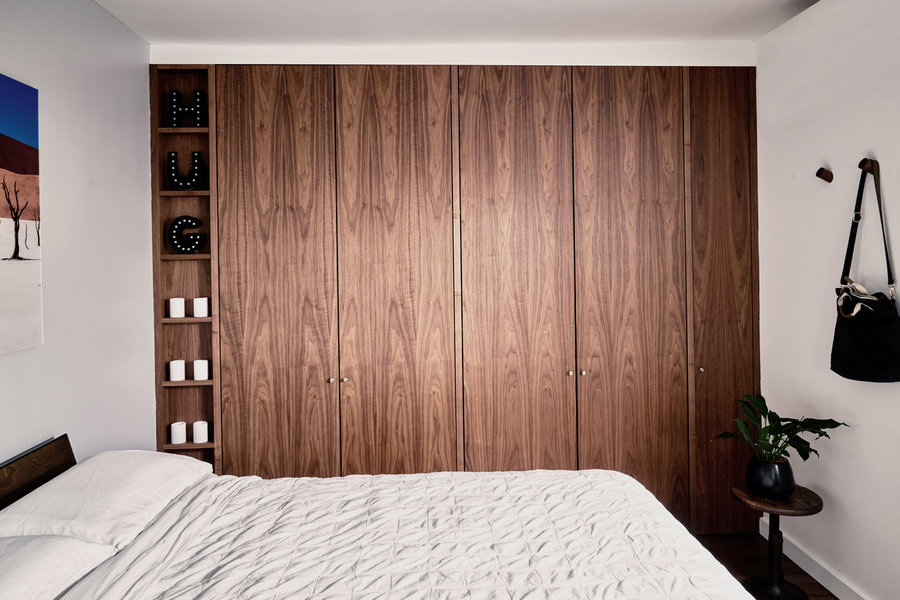 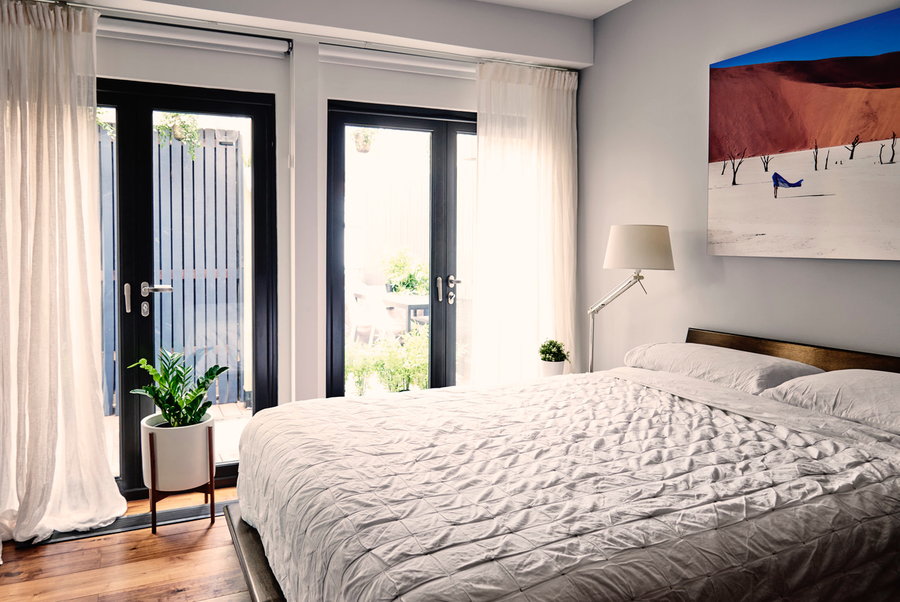 White-painted drywall and a melange of oak, maple, and American walnut wood surfaces soften the apartment and make it feel lighter and brighter. The original spiral staircase now leads to the second-floor bedroom, bathroom, and an outdoor terrace, while a second, ladder-style staircase in the kitchen offers access to a lofted, plywood-lined guest bedroom. 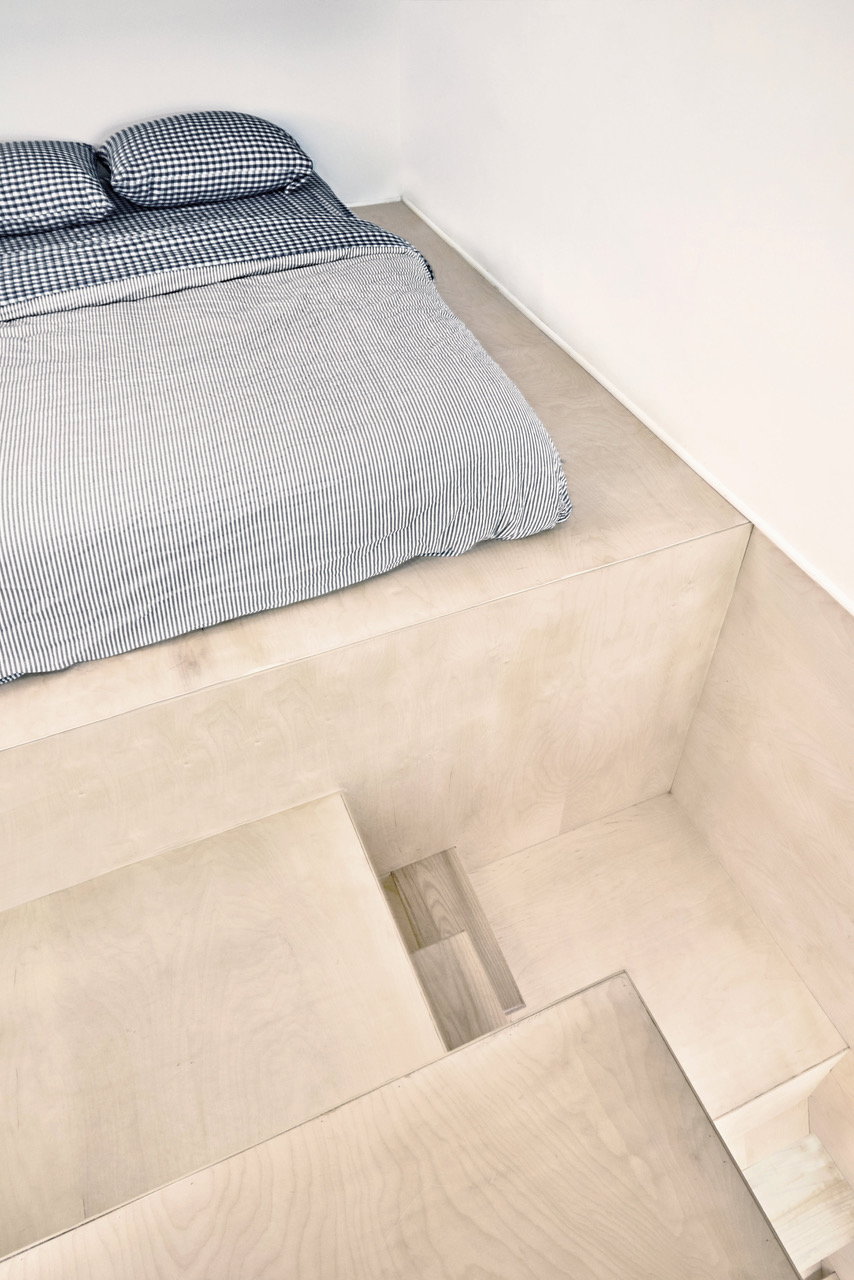 OSSO Architecture, a New York City-based firm founded in 2017 by Margot Otten and Douglas Segulja, worked with Ashiru to design and furnish the space with features like a wood island, new Bosch appliances, and an alcohol-burning hanging fireplace by Fireorb, which itself meets all New York City’s strict rules about ventilation. 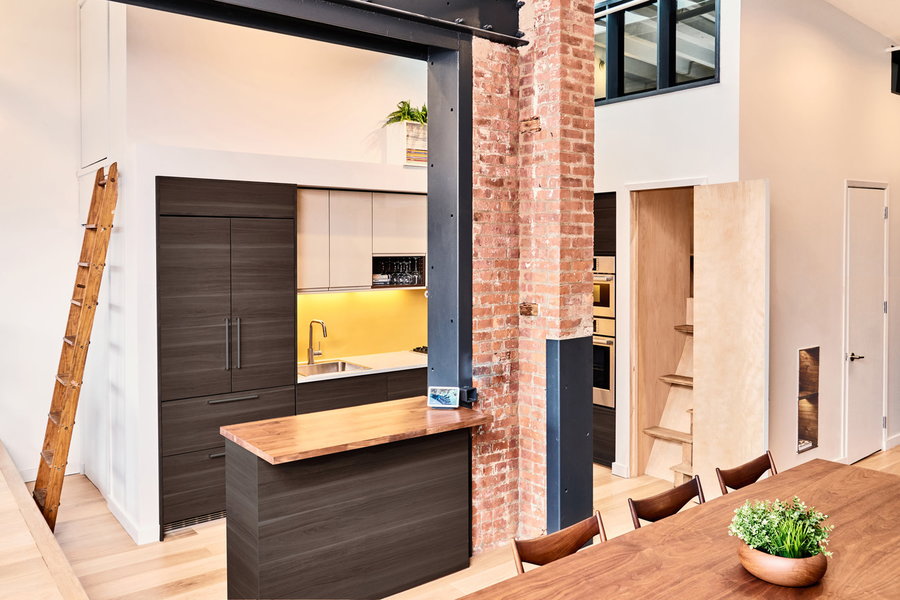 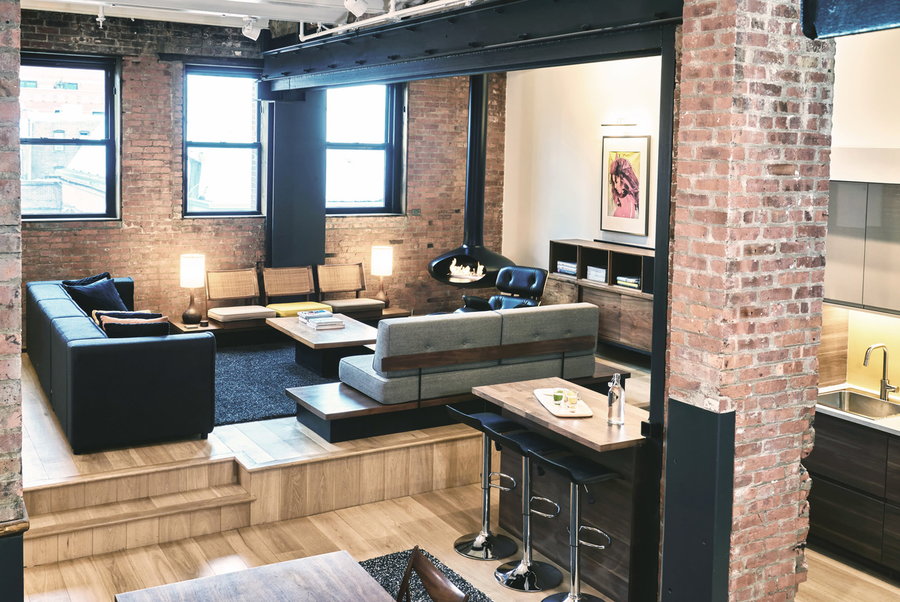 Cities are like living organisms, constantly changing and evolving. While we’d love to see a lot more projects converting cool old structures into affordable housing, it’s nice to see renovations that honor the character and history of their original buildings and the neighborhoods around them – projects that work hard to preserve architectural elements instead of merely replacing them with something new.