A historic courtyard in Beijing is all set to become one of the coolest kindergarten centers the world has ever seen, its older buildings already being surrounded by a fluid floating structure in invigorating shades of red and coral. Chinese architecture firm MAD unveiled renderings for its “Courtyard Kindergarten” in late 2018, with an expected completion date of fall 2019. It all starts with a residential siheyuan dating back to 1725, which the firm aims to protect and preserve while also creating “a multi-layered urban narrative” where old and new can coexist. 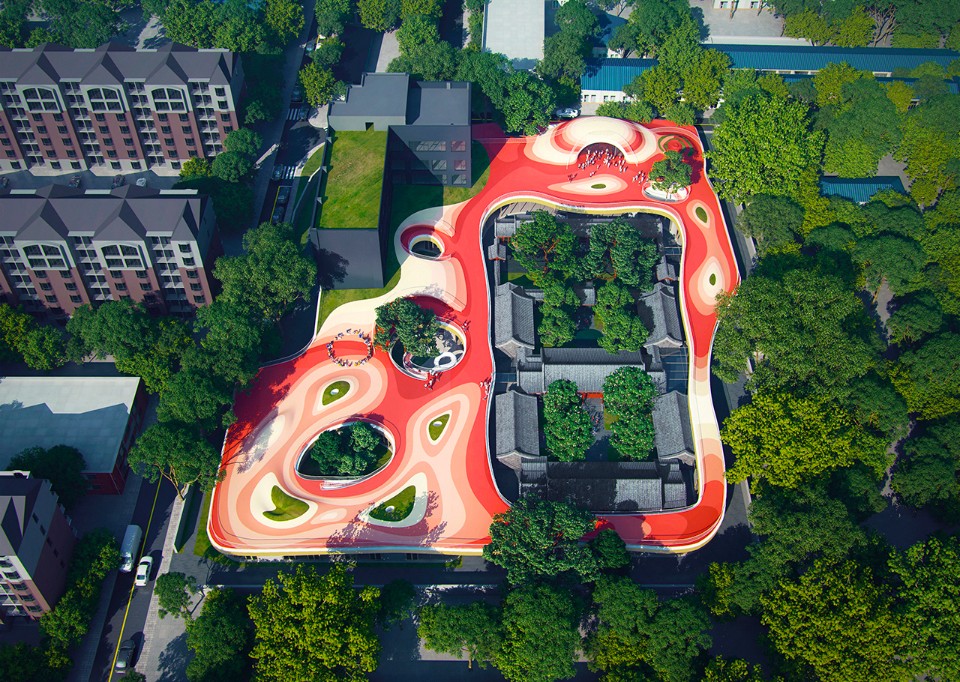 The floating playground seen in aerial renderings is actually a fluid network of platforms and walkways that connects the school’s buildings, turning the roof into a playful refuge that’s bursting with opportunities for fun. MAD has also woven modern structures — including a residential unit from the 1990s — through the old courtyard to transform the spaces between the original buildings. They believe designs like this can help deepen children’s understanding of time and depth.

“There is a saying in old Beijing when children are naughty: ‘if you go three days without being punished, the roof will cave in,’” says founder Ma Yansong. “My ideal kindergarten is not a theme park or a place of shelter. It should be objective and real but go beyond reality and provide some space for the unknown and imagination.” 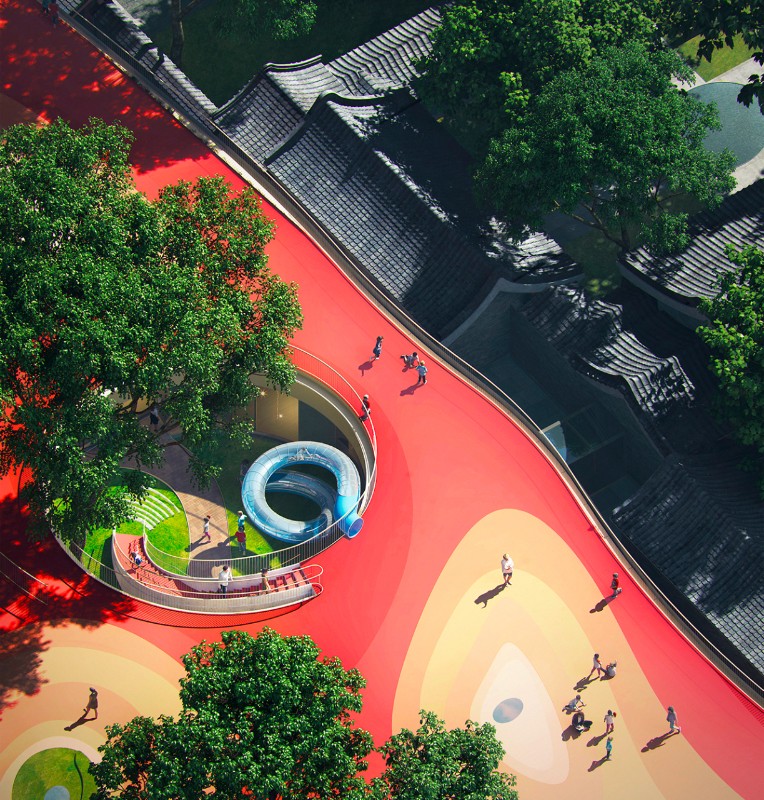 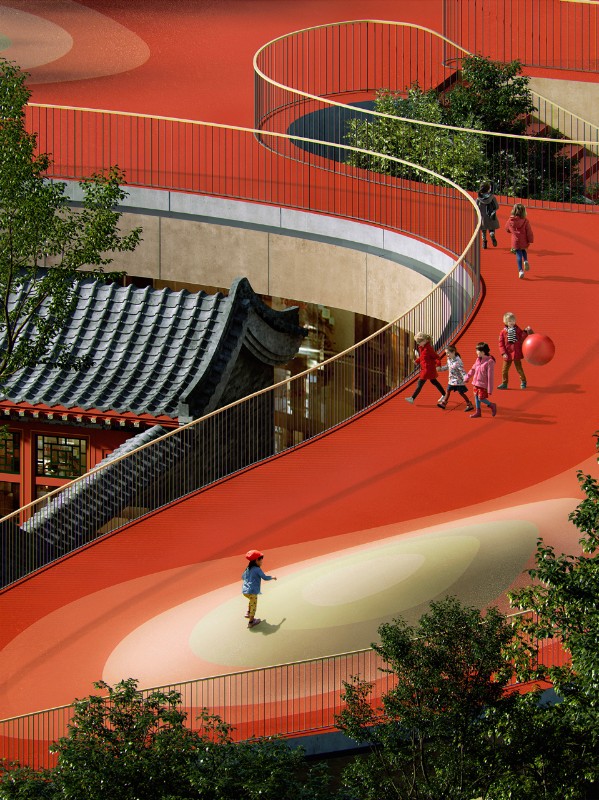 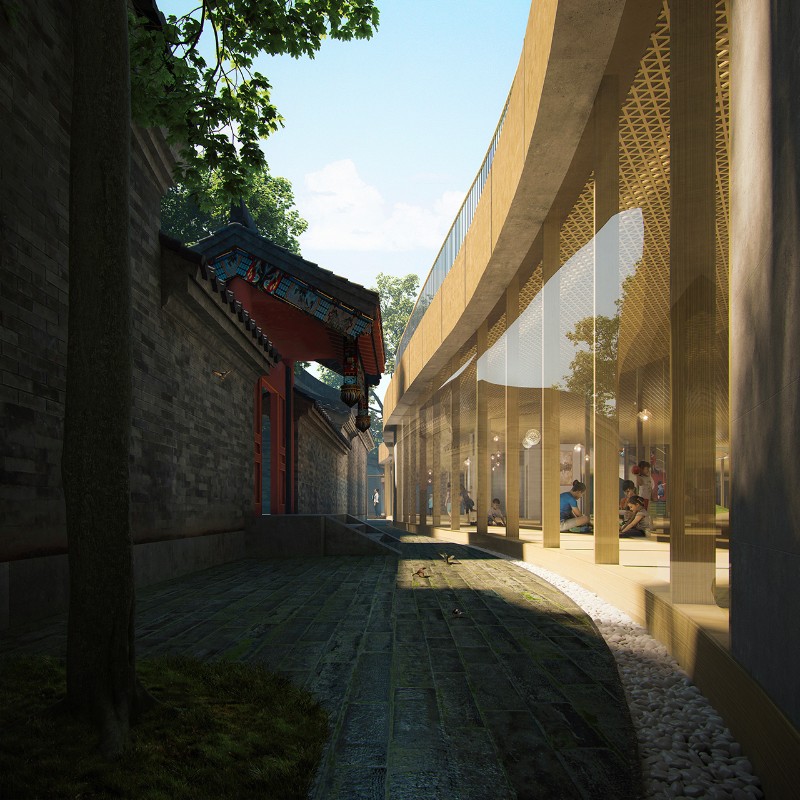 Renderings also give us a sneak peek at some of the school’s other fun features, including a domed rooftop area protected from the elements and a tubular blue slide. Openings in the platforms make space for three ancient trees on the site and allow natural light to filter down to the ground.

Beneath the new roof sits enough open-plan space to accommodate 400 children aged two through five, as well as several classrooms, a library, a small theater, and a gymnasium, all of which have been designed with a light and airy touch that encourages “a free and inclusive atmosphere.” The outdoor areas seamlessly interplay with the indoors, allowing the children to feel immersed in the school’s historic structures, grassy play areas, walkways, and slides even when they’re in the middle of in class. 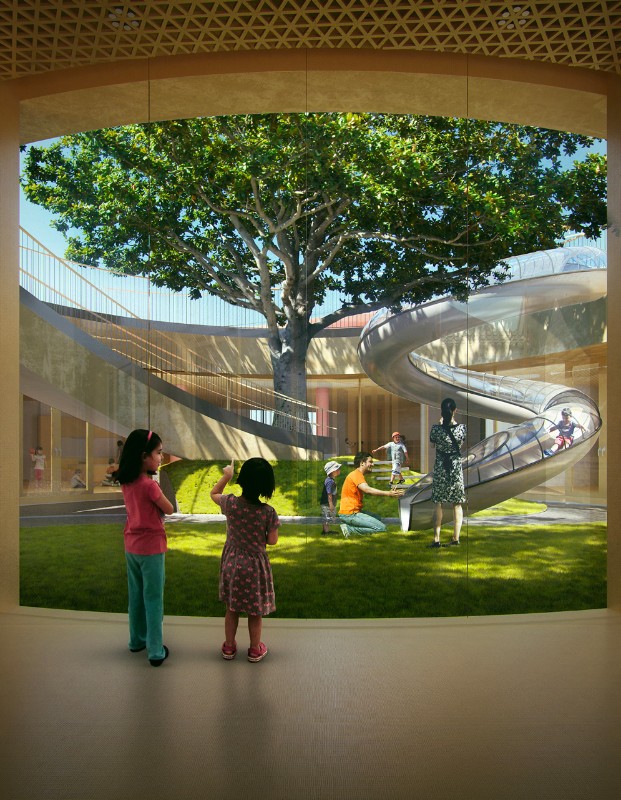 Not only does the kindergarten center’s walkable red roof totally transform the landscape in which it’s set without displacing the courtyard’s preexisting architecture, but it also drastically increases the amount of space where students can scratch their curiosity itches. Children get to explore all the little nooks and crannies on the ground level (including the liminal spaces between buildings old and new) and gaze out at the neighborhood through the treetops, observing their surroundings from an entirely new perspective. 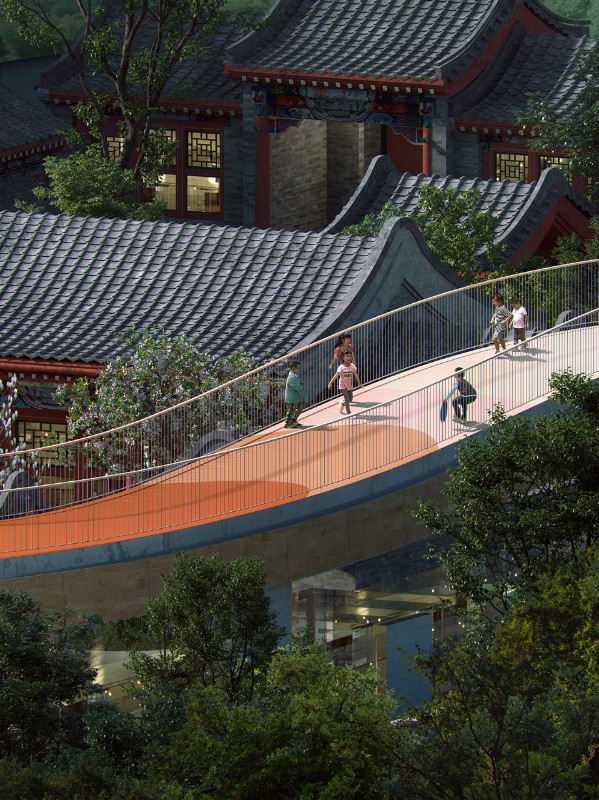 “Unfolding onto the site with a low and gentle posture, the roof transforms the limited space between the various buildings into a colorful playground that functions as the main place for children to engage in outdoor sports and activities,” say the architects. “On the southwest side of the roof, a subtly undulating surface of several small ‘hills’ and ‘plains’ creates a high and low terrain, forming a playful landscape.”