Like layers of sheer white clothing worn to reflect light, protect your skin from the harsh sun, and keep you cool, translucent cladding and metallic curtains create a diaphanous shield around a hot, flat, dingy building and give it a luminous appearance after dark. 314 Architecture Studio approached the renovation of a Greek apartment building in Athens the way they do many of their projects, like their recent “House in Corfu,” adapting traditional Greek architectural sensibilities for the modern era without sacrificing any of the island nation’s classic, instantly recognizable style. 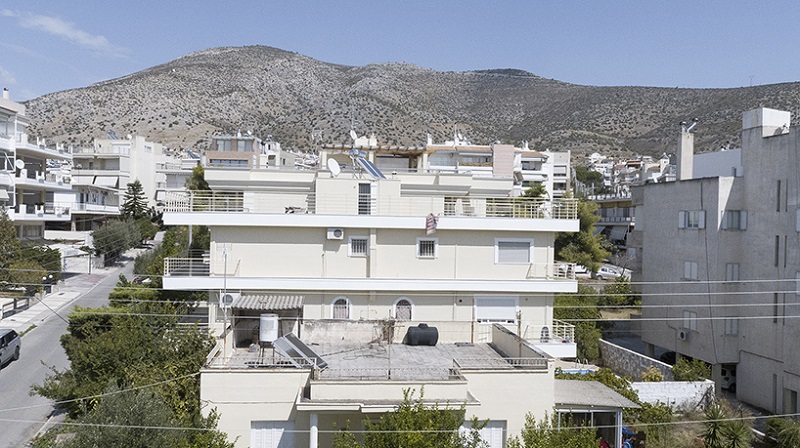 The existing building, which measures about 3,229 square feet and takes up almost all of its lot, resembles most of the other 1970s and 1980s-era structures surrounding it. It’s simple, highly rectilinear in shape, and lightly colored to avoid absorbing too much heat. There’s nothing particularly architecturally distinct about it. The clients commissioned 314 Architecture to redevelop all four levels of the rental, including a small walled-in garden on the ground floor, the two middle floors, and a penthouse master suite on the rooftop. 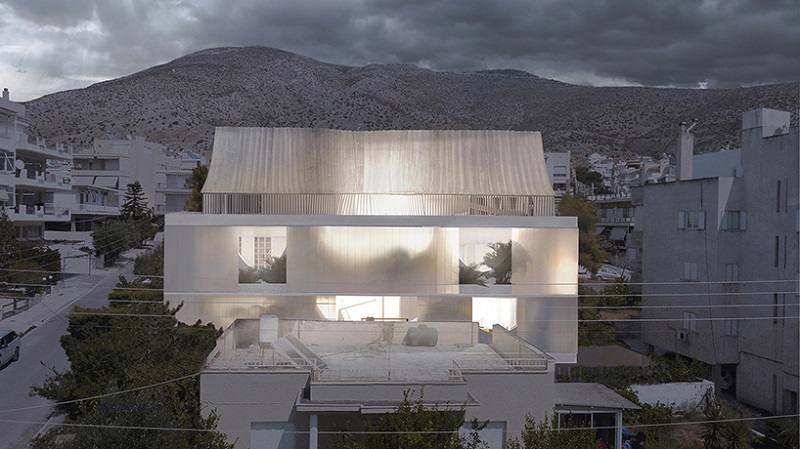 The architects call their vision for the renovation “H102 Romance Contemporaine,” or “contemporary romance,” an aesthetic that’s immediately identifiable thanks to the billowing curtains shielding the top floor from view and the sultry shadows that can be discerned from behind the translucent panels of the new facade. The existing building features wraparound balconies on the two uppermost levels, which the architects transformed into solariums contained by the same sheer walls. 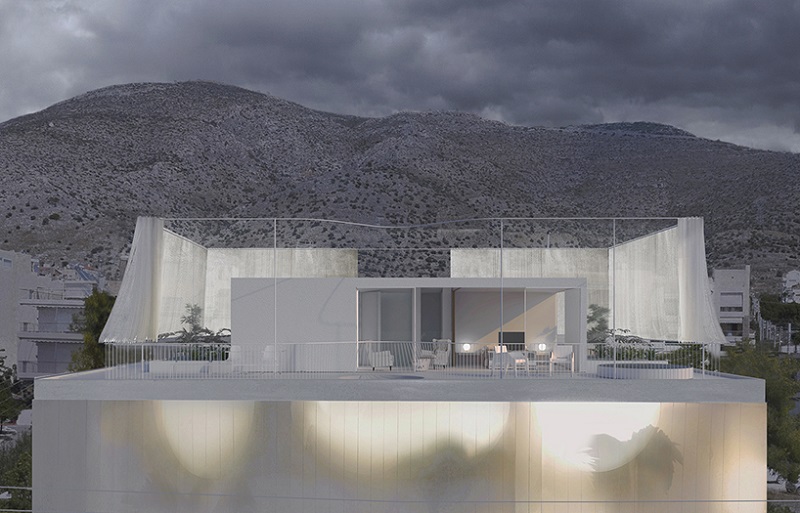 “The romantic character is even more emphasized through the continuous curved engravings, which are depicted as an imprint of light and shadow on the blurry translucent facades,” say the architects. 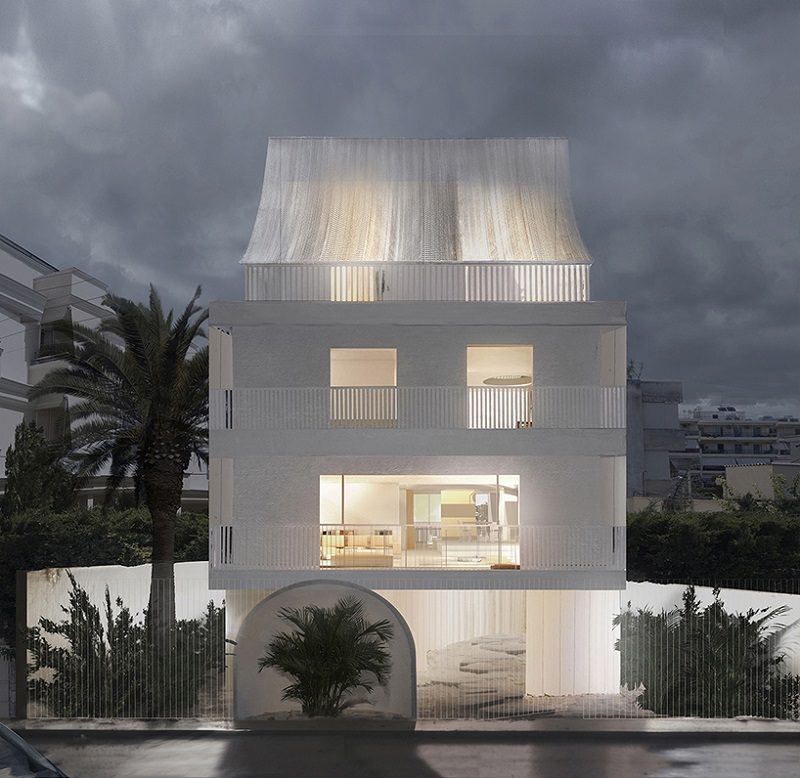 Now, lush tropical plants flourish on those balconies, bringing some much-needed vitality into the interiors while screening some of the sunlight and improving the air quality. New arc-shaped openings in the exterior walls provide both visual and functional access to those same balconies, enlarging the amount of usable space. Inside, the rooms are bright, white, and open: the architects removed many of the dividing interior walls to encourage a sense of free-flowing movement. They also pierced through the ceilings of each level to create new atria, with a sliding ceiling at the top that regulates the circulation of warm air inside by allowing it to escape in the summertime and holding it in during the colder months. 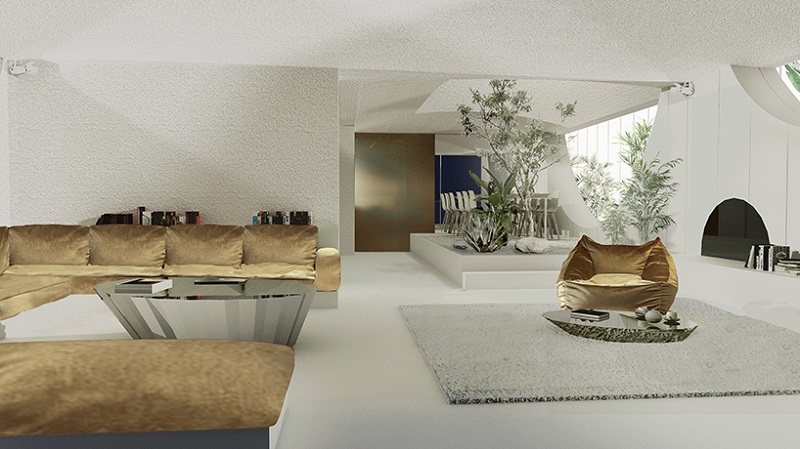 The top level is where the project really shines, both literally and figuratively. A small rooftop volume gives the inhabitants beautiful views of the sandy hills surrounding the city, but it feels a little overexposed to both the unforgiving sun and the gaze of neighbors. The solution is a weatherproof metallic curtain that can be drawn around the entire space while keeping it open to the sky, giving it the feel of a private sanctuary. 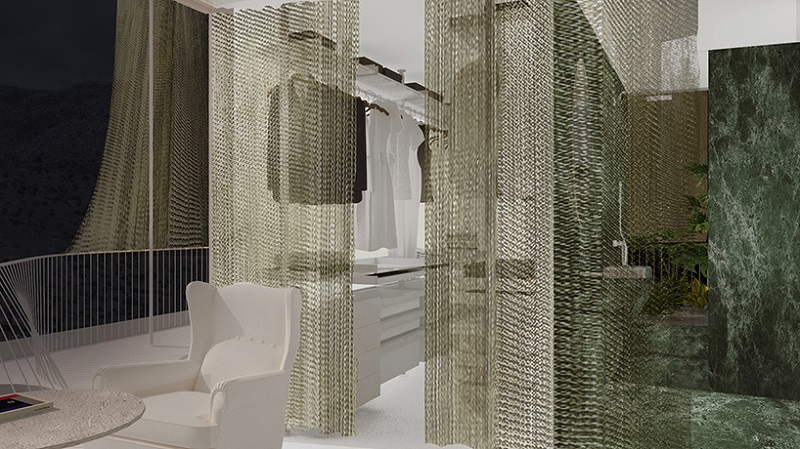 Like “House in Corfu,” which transformed a bland building with spectacular views of the Ionio Pelagos, “H102 Romance Contemporaine” uses transitional indoor/outdoor spaces to create a dialogue with its surroundings and make the most of a warm, temperate climate. Free of fussy details, it puts the focus on modern Greek lifestyles, adding comfort and functionality while preserving the existing building as a natural fit in its Athenian setting.