Construction projects produce a staggering 1.1 billion tons of waste around the world each year, and that figure is expected to double by 2025. A large percentage of that waste is produced at the end of a structure’s lifecycle, when it’s demolished, and most of it ends up in landfills rather than being reused or recycled. But only a very small number of buildings are designed with their own end in mind, with the architect considering how to reduce the negative impact of its lifecycle well ahead of time. 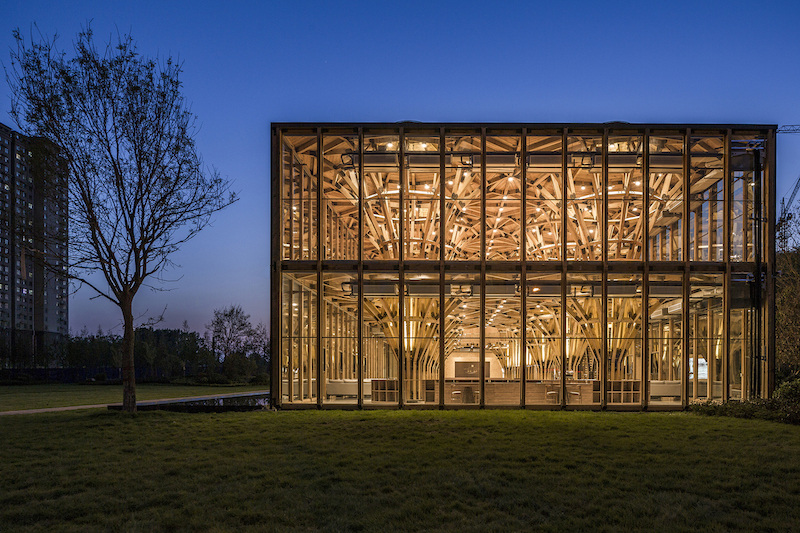 That could change as more architects, designers, and urban planners turn to strategies like “Design for Disassembly,” which plans for the end of a structure’s usefulness as well as its potential for reincarnation. The goal is to create enduring projects that are “closed loop,” in which as many of their materials are recovered as possible and adapted for new purposes. Above all, it necessitates looking at the supply chain in reverse, thinking about the ways a building will eventually be disassembled.

When the owner of a real estate business decided he needed a new sales center in China’s Henan province, he approached architecture firm LUO Studio looking for an innovative, budget-friendly, and green solution. More specifically, he wanted to target consumers who prioritized sustainable living with a building that was environmentally responsible and made from natural materials — and he wanted it designed, constructed, finished, and decorated in less than two months. 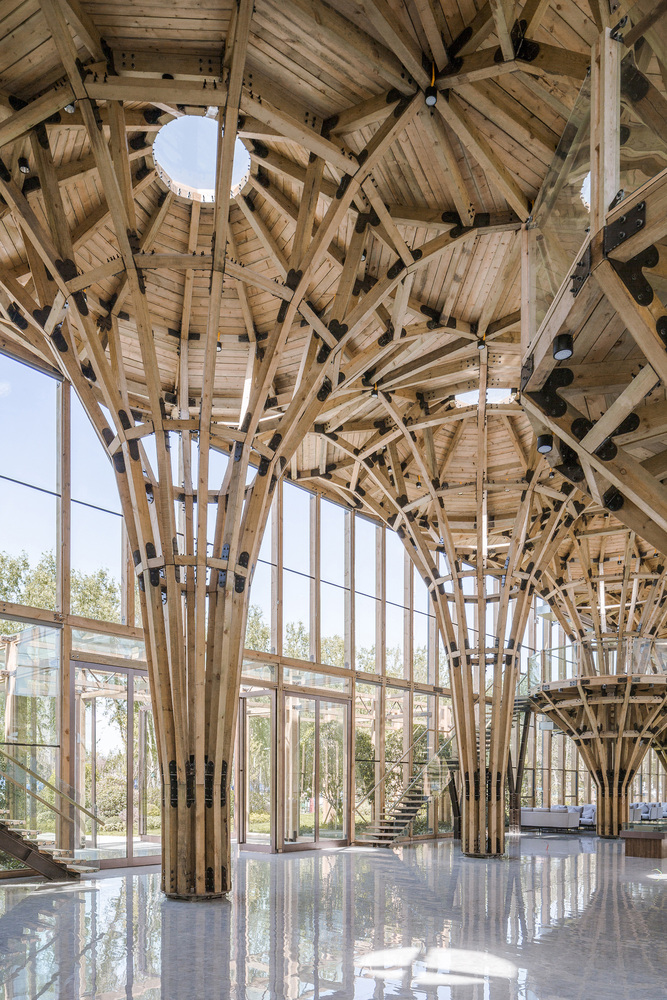 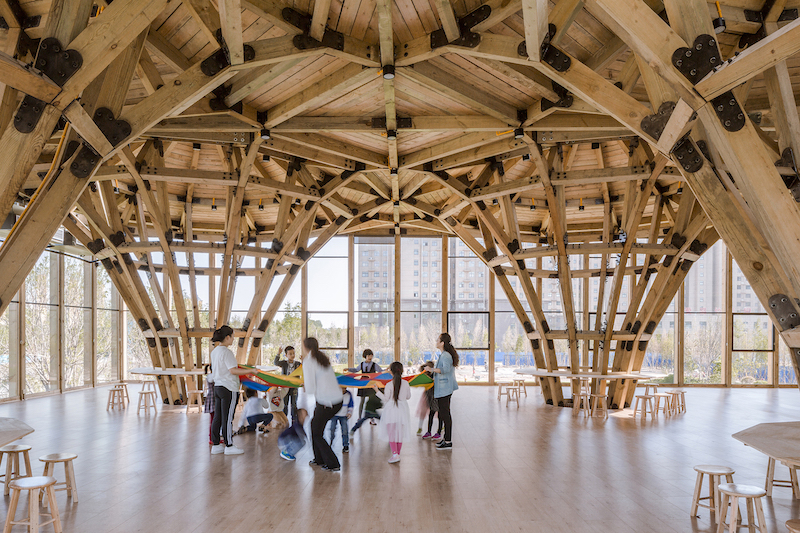 The Beijing-based architects responded with Longfu Life Experience Center: a design that delivered on all of those goals without compromising an ounce of elegance or beauty. Drawing inspiration from Mies van der Rohe’s Crown Hall at the Illinois Institute in Chicago, the firm envisioned a series of modular structures held within a crystalline envelope. These tree-shaped units are made from renewable, cost-effective timbers and joined together using simple metal connectors.

Each structure is independent of the others, but when they’re combined, they form strong and stable continuous arches. Infinitely expandable, the system produces a series of stackable columns, producing mezzanine levels as they branch out at the top. 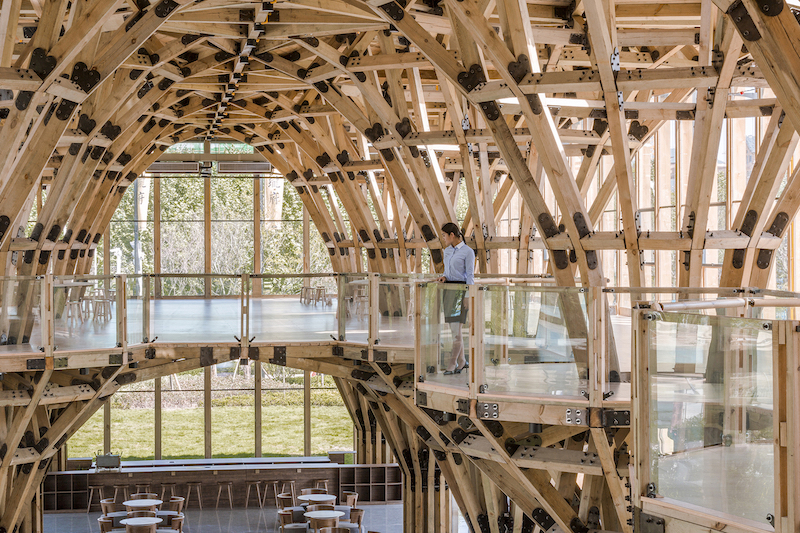 It was a challenge, says LUO, but the system they came up with is clearly worth all the hard work. They even established a set of standard assembly tactics to make the construction and installation processes as quick and smooth as possible, with many components prefabricated offsite.

“All components can be completely dismounted, installed, moved and reused for other constructions, making the building thoroughly reversible,” they explain. “If the building is a person, all the equipment, electromechanics, pipelines of it are the respiratory systems, collaterals, and blood vessels of the body. All these systems in the body are by no means isolated, but are highly integrated with the skeletons and muscles in a symbiotic state, resulting in a more effective and intensive space.” 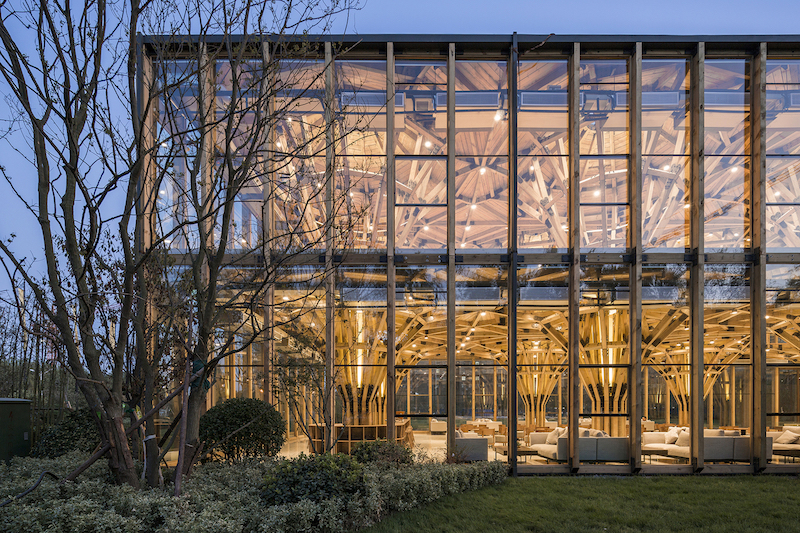 “Other parts of the building were also designed in a way similar to the structure of body. Taking furniture as example, all the furniture ‘grows’ on the structural column, with each table surrounding a single ‘clustered column.’ All the furniture and guardrails stretch out of the core structure and even weave a surface by extending outward. These necessary parts are concomitants of the main structure, providing support against it and making it more stable.” 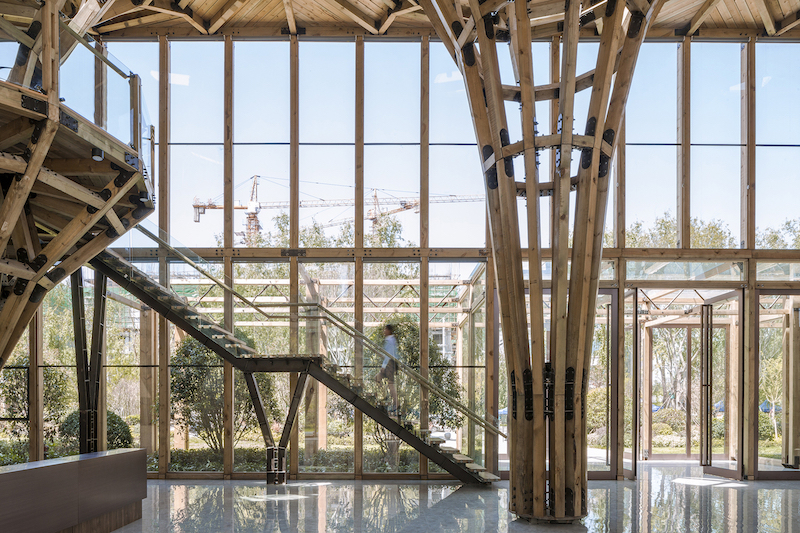 The resulting “universal space” offers infinite possible usages rather than being constrained to a certain specific function, ensuring that its life will last well beyond the needs of the business owner who commissioned it. Any part of it can be enlarged, removed, replaced, or moved based on current needs, and when it’s time for it to come down, all of the materials can be reused for new projects.