A new traveling art exhibit by Boston native Tishan Hsu explores the simultaneously symbiotic and destructive relationship between humans and their technology. The twist? Most of his designs were created in the 1980s, well before the development of smart devices and their many-studied effects on our biology. His prescient work anticipated the world we now experience, navigating both the good and the bad of lives laced with motherboards. 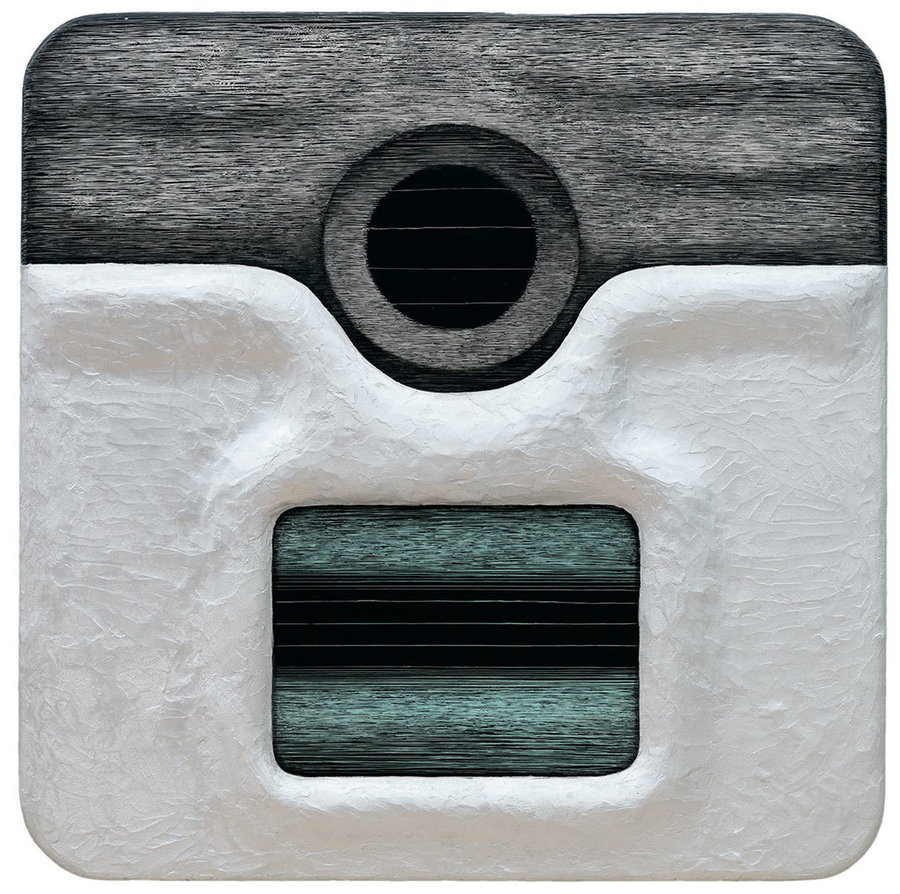 After graduating in architecture from MIT, Hsu supported his art career in the early 1980s with night jobs as a word processor. Interacting with computers much earlier than the general public, he began to sense how the tech could at once be imprisoning and liberating. He began to create abstractions that reflected that internal struggle, works that were largely under-appreciated at the time. 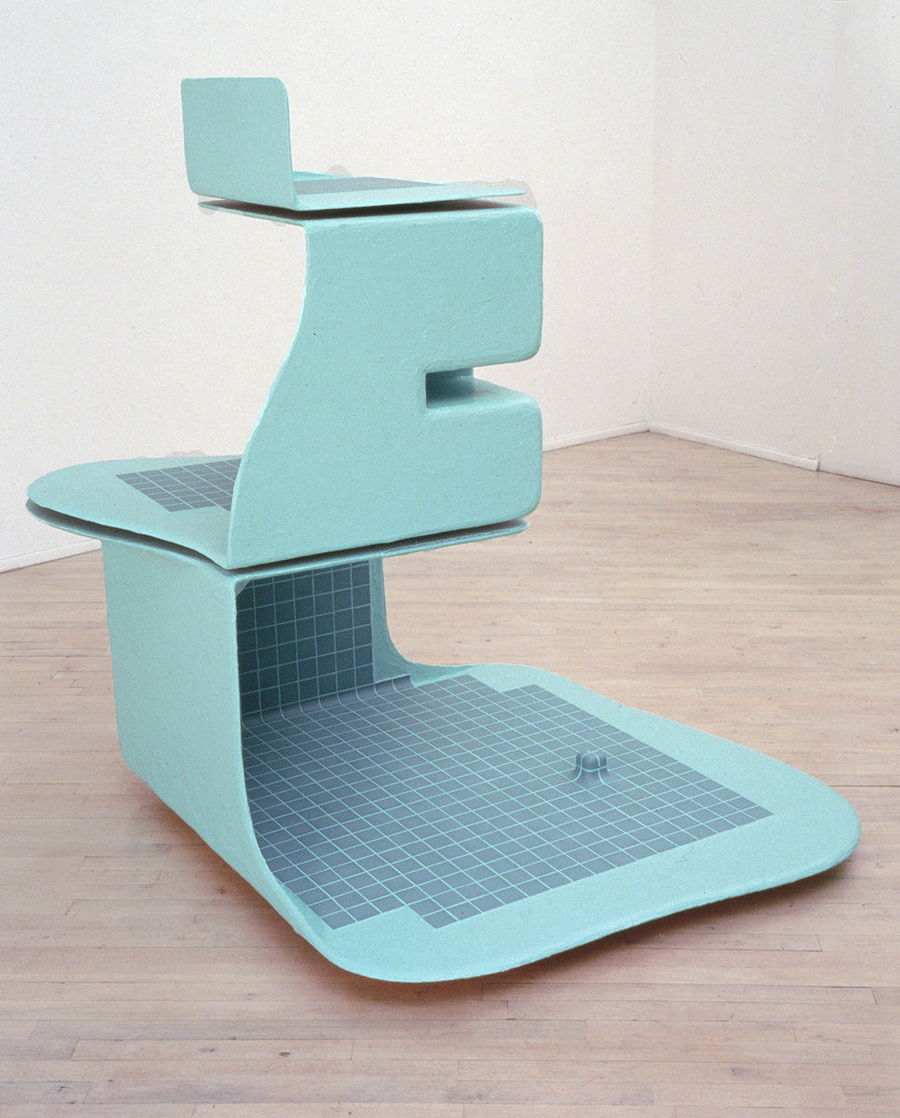 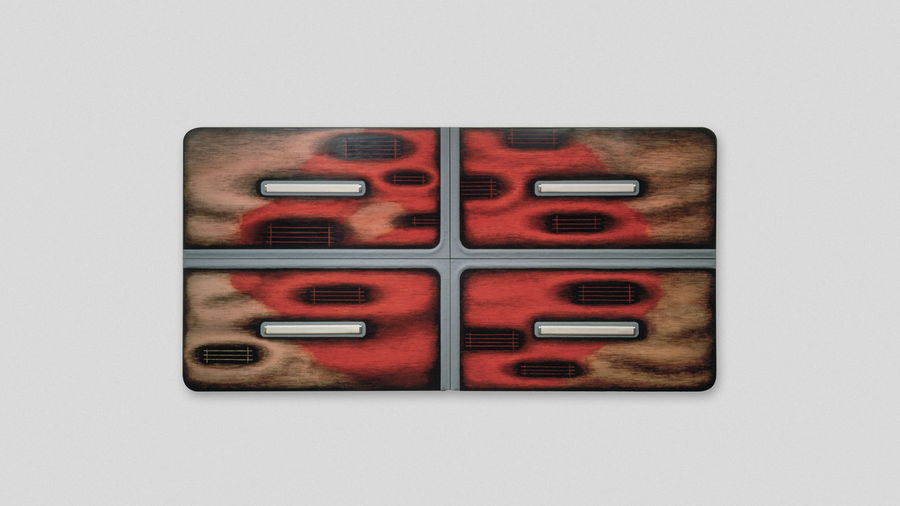 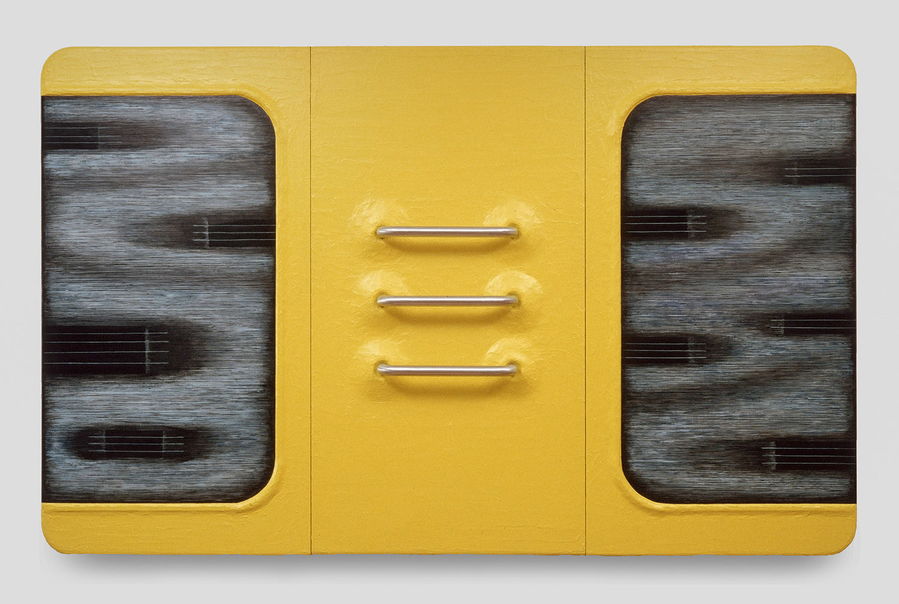 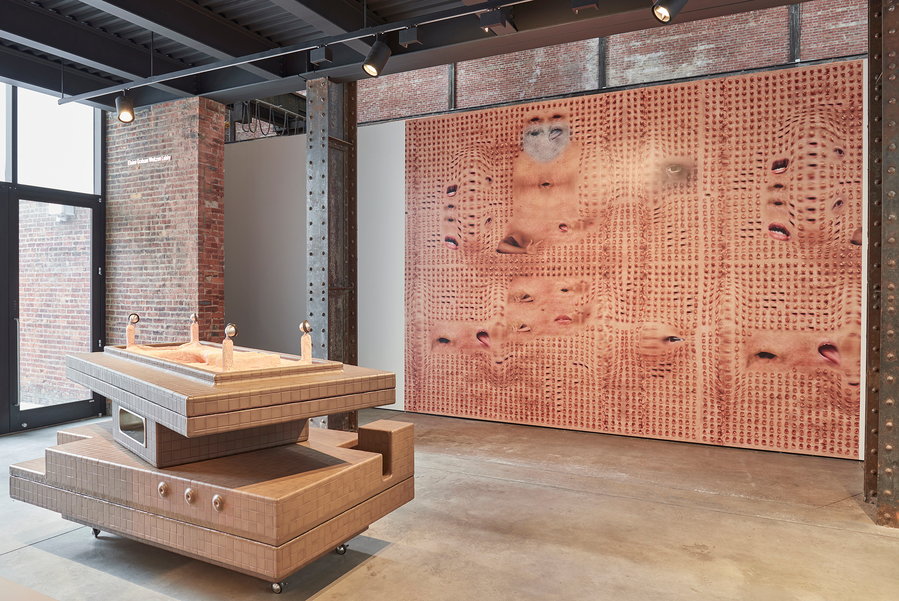 Recognizing that “technology was becoming an extension of the human body,” as author Julie Belcove wrote on RobbReport.com, Hsu foresaw it was a condition that “was destined to intensify over time. Modular tiles in his sculptures echoed bits of digital data; three-dimensional objects hinted at contraptions yet to come. Paintings evoked computer monitors but also blood cells or flesh.” As tech became more and more integrated into our daily lives, he felt the human form needed new representation.

“In a way, I had to create a different body in the world,” Hsu says. “Maybe I was just projecting all of this onto new technology: we’ll have a different body.”
On display in his first traveling show — first at L.A’s Hammer Museum and now at New York’s SculptureCenter — are several pieces that make one wonder if Hsu peered into a crystal ball forty years ago. Closed Circuit II (1986) is eerily similar to the Instagram logo, while Squared Nude (1985) is reminiscent of an iPhone. 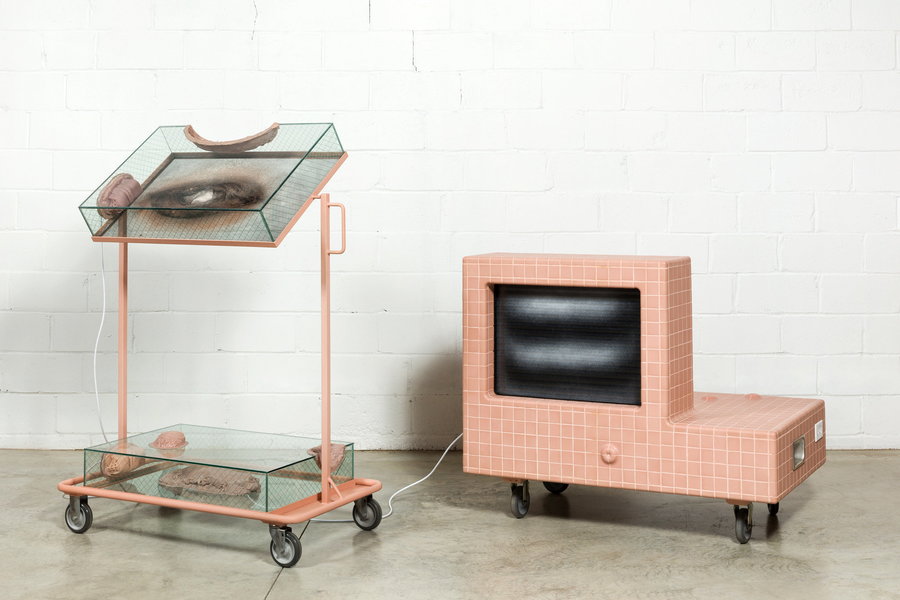 Showing the ambiguous nature of the human-tech relationship, the sculpture “Virtual Flow” (1990-2018) connects a screen encased by peach tile to a glass tray table with what look like human organs and tissues. Each plugs in to the other, begging the question “which is giving power and which is drawing it?” 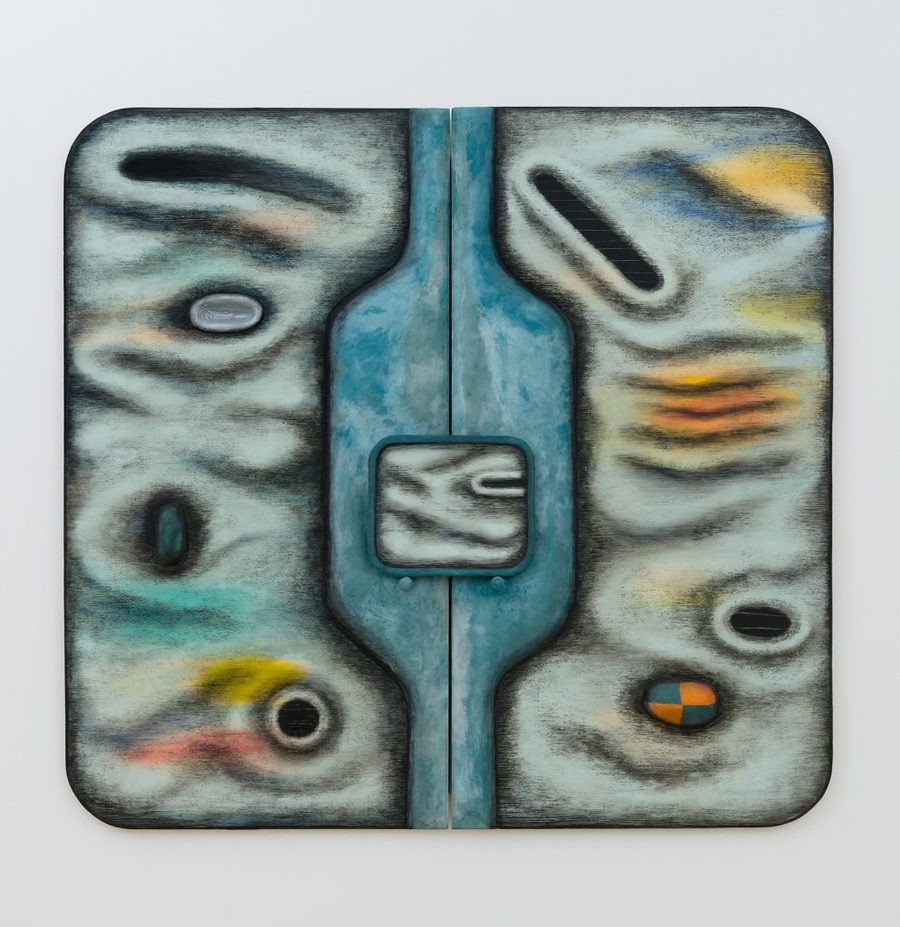 “Outer Banks of Memory II” (1984) is a rounded square of oblong orifices and rib-like waves situated in gray fleshy backgrounds, divided and held together by a computer chip-esque rectangle. 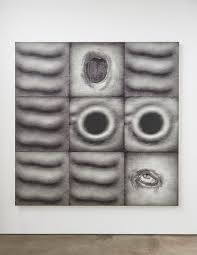 The gray and black sculpture “Cellular Automata 2” (1989) showcases a nine-square grid with an eyeball, mouth, and two unidentifiable holes, all surrounded by rippling tissue. 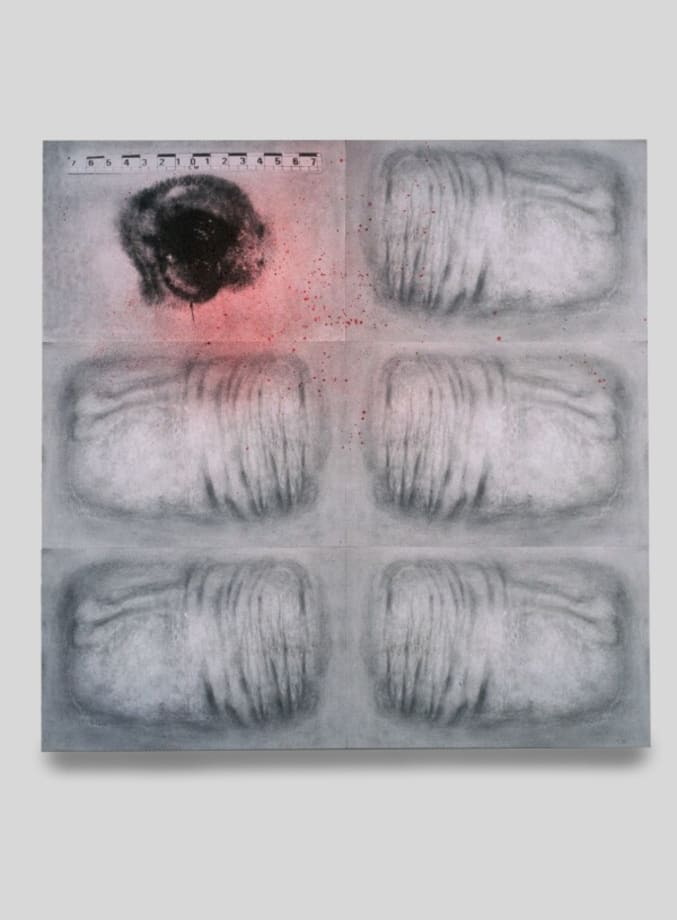 In other Hsu works, holes are a sign of the sometimes-violent interface of technology and humans. “It’s Not the Bullet but the Hole 2” (1991) is a black-and-white silkscreen with a photographed bullet hole in the top left, with an ominous red glow taking the place of blood. The rest of the piece is a mix of skin-like protrusions and computer part cavities. 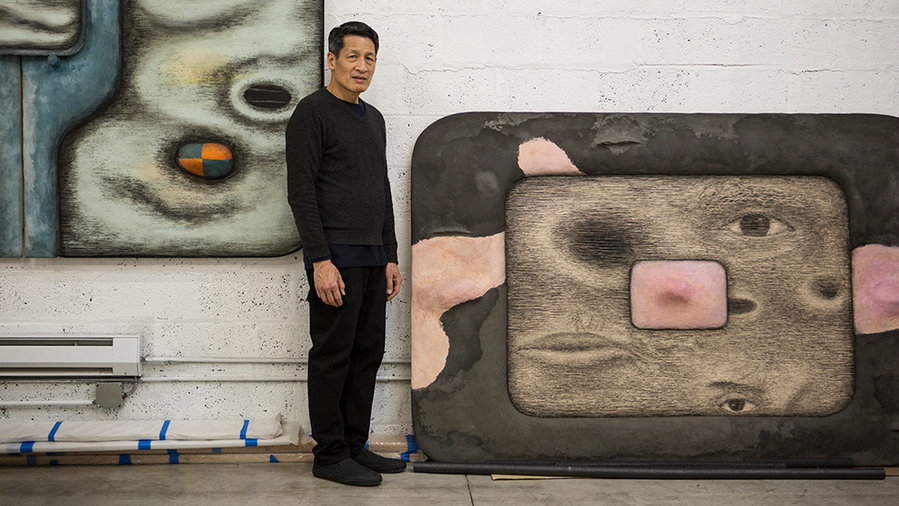 Way ahead of his time, Hsu’s “Liquid Circuits” pieces exhibit the sense of internal alienation we encounter as we navigate the technology embedded in our daily lives. Looking at his art provides the sensation we feel as we scroll through screens, shoot off emails, or interact with our smart devices: we use them almost intuitively while simultaneously fearing the mystery of the machines and secret algorithms that control our world.