The internet loves cats, so it’s no wonder that a new cat contraption has been making the rounds online in recent weeks. Everyone wants their furry friend to have as much fun as possible, especially if they’re home alone all day and have no one to play with. That’s why Japanese pet product company RINN got designer Yoh Komiyama to help them create “Neko,” a cat-friendly climbing frame that is sure to keep your pet occupied for hours on end. Plus, it’ll provide them with plenty of space to take those much-needed cat naps once they’ve tired themselves out. 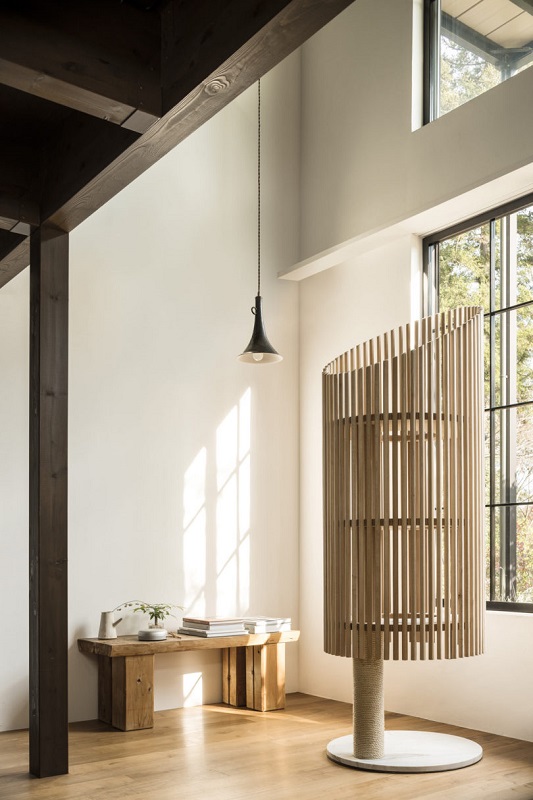 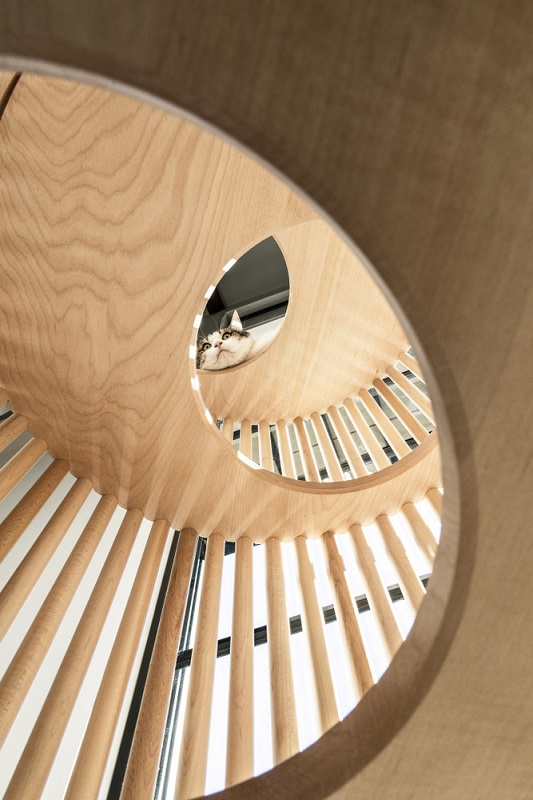 RINN is something of an expert in the field of cat accessories, and as part of its new collection, it’s also releasing an automatic cat feeder called “Petly” and the “Izumi” cat water bowl. But above all the others, Neko takes cat convenience to the next level, as it’s not only a jungle gym for your cat, but also a decorative feature for your house. 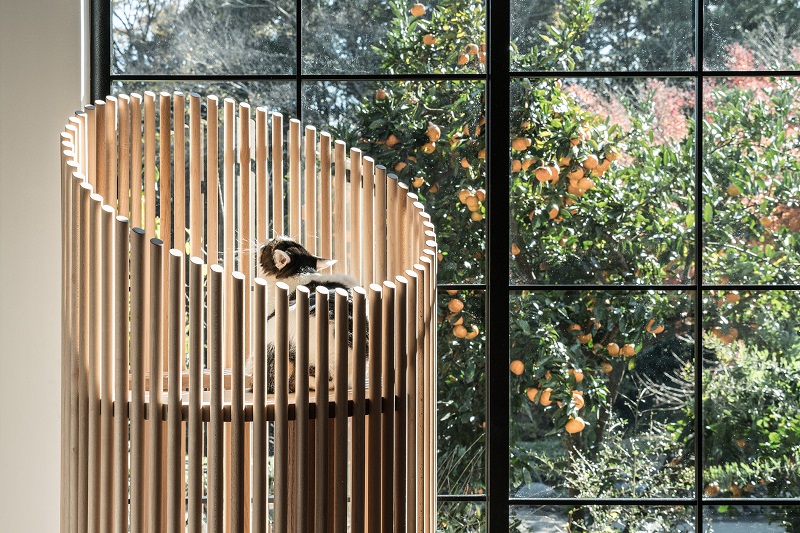 This modern cat tree has all the trappings of contemporary Japanese design: a minimal silhouette, a timber body, and a simple and calming appearance. The Japanese hardwood rods that make up the cylindrical tree have been evenly spaced to allow light to pass through, casting interesting shadows on the ground as the day goes by. The top end of the cylinder is cut downwards at a 45-degree angle and is supported by a scratching post that extends upwards from the floor. The entire structure is supported by a round disc that sits on the floor, balancing the contrast between Neko’s vertical element and its heavier-seeming timber posts. 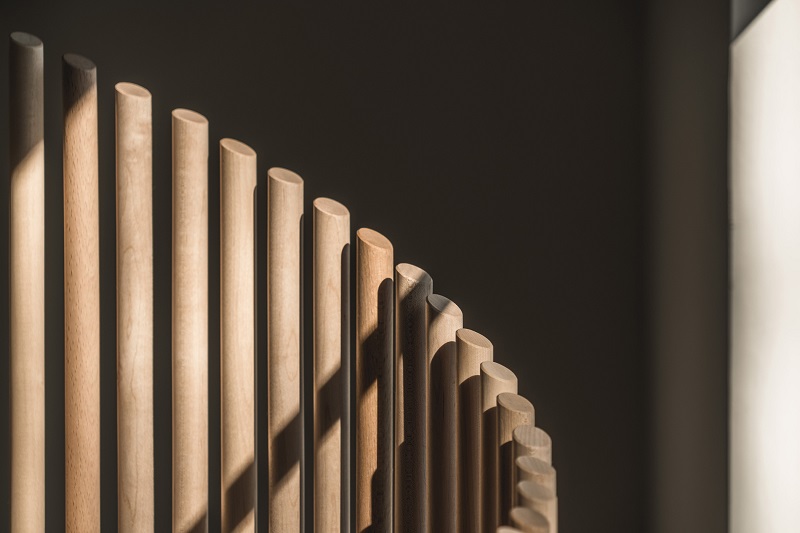 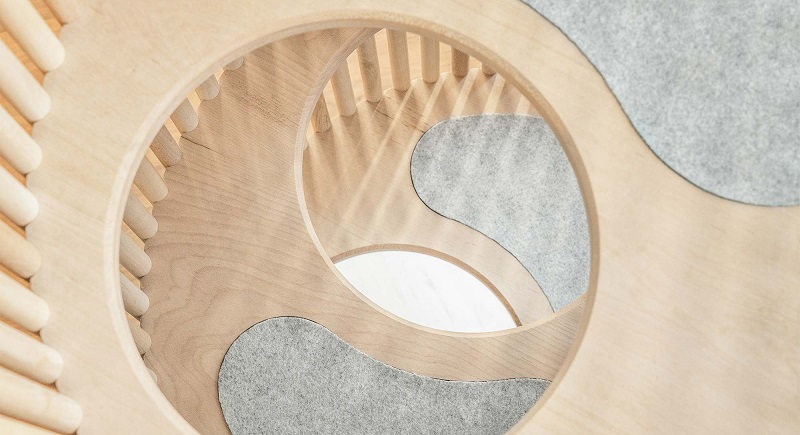 Within the cylinder are three tiered platforms, on which your kitty can either nap or stand as they go wild on the scratching post. Each platform has an opening so your cat can jump from one level to the next, and the top tier is high enough up for it to poke its head out of the top. If it feels like giving acrobatics a go, it might even jump out over the rods. 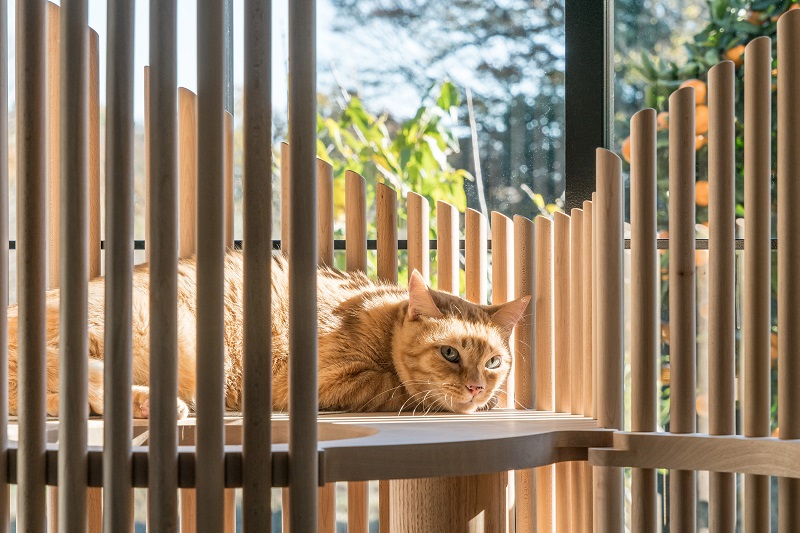 The materials used to create Neko combine Eastern and Western styles. Japanese hardwood, sourced from a forest in Japan’s Hida region, is used for the exterior rods and the platforms, while the supporting scratching post is covered in hemp rope (a material that’s both scratchy and environmentally friendly) and the disc at the base is made of white marble. The warm wood and cold marble are both smooth in texture, contrasting with the rough surface of the rope. According to Rinn, this juxtaposition also creates a “cultural fusion between the wooden materials of the East and the stone materials of the West.” Each platform also boasts a section that’s covered in Kvadrat fabric so your cat has somewhere cozy to take a nap. Place your Neko beside a window to get the best out of the shadowplay it generates and give your cat a warm place to laze around in.