Kaleidoscopic reflections of the surrounding snow-covered mountains transform what artist Doug Aitken calls an “utterly generic” ranch-style house into an artistic wonder. Created as part of the ELEVATION 1049 international visual and performing art exhibit in Gstaad, Switzerland, “Mirage Gstaad” almost completely disappears into its surroundings when seen from afar, its interior and exterior changing constantly throughout the day according to the weather and the position of the sun. 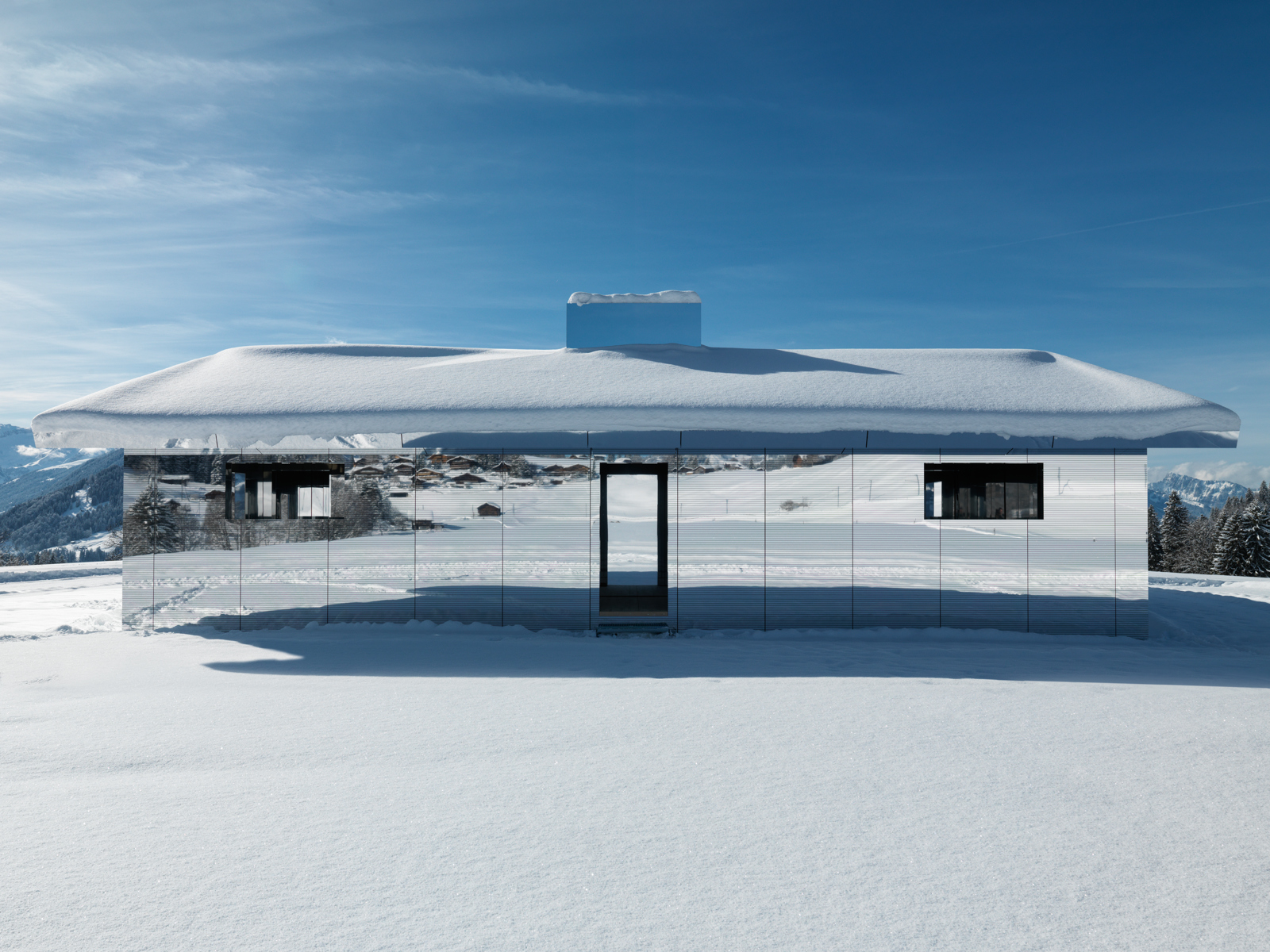 Aitken notes that the single-level ranch house is an archetypal 20th century-design in the United States — one whose exceedingly simple shape made it the perfect blank canvas for the project. Developed in the 1920s and 30s, this style marries the modernism of Frank Lloyd Wright with the rugged, straightforward characteristics of traditional houses built throughout the American West. It’s become so ubiquitous that it almost lacks any personality of its own. Cover it in mirrors and it disappears altogether, greeting visitors with a surreal, dreamlike space that will never look exactly the same twice. It’s essentially defined by its surroundings, and by the perception of whoever enters it. 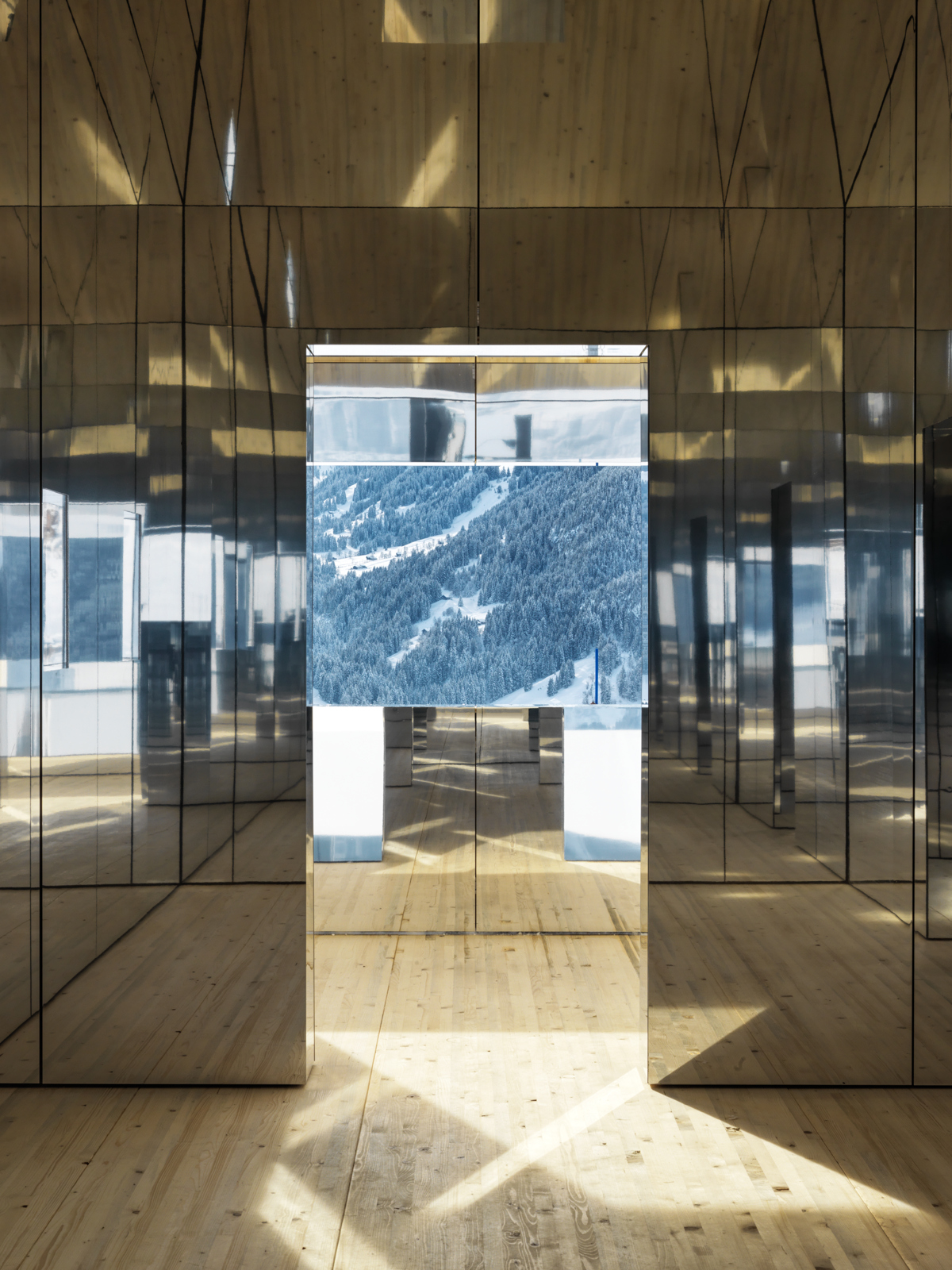 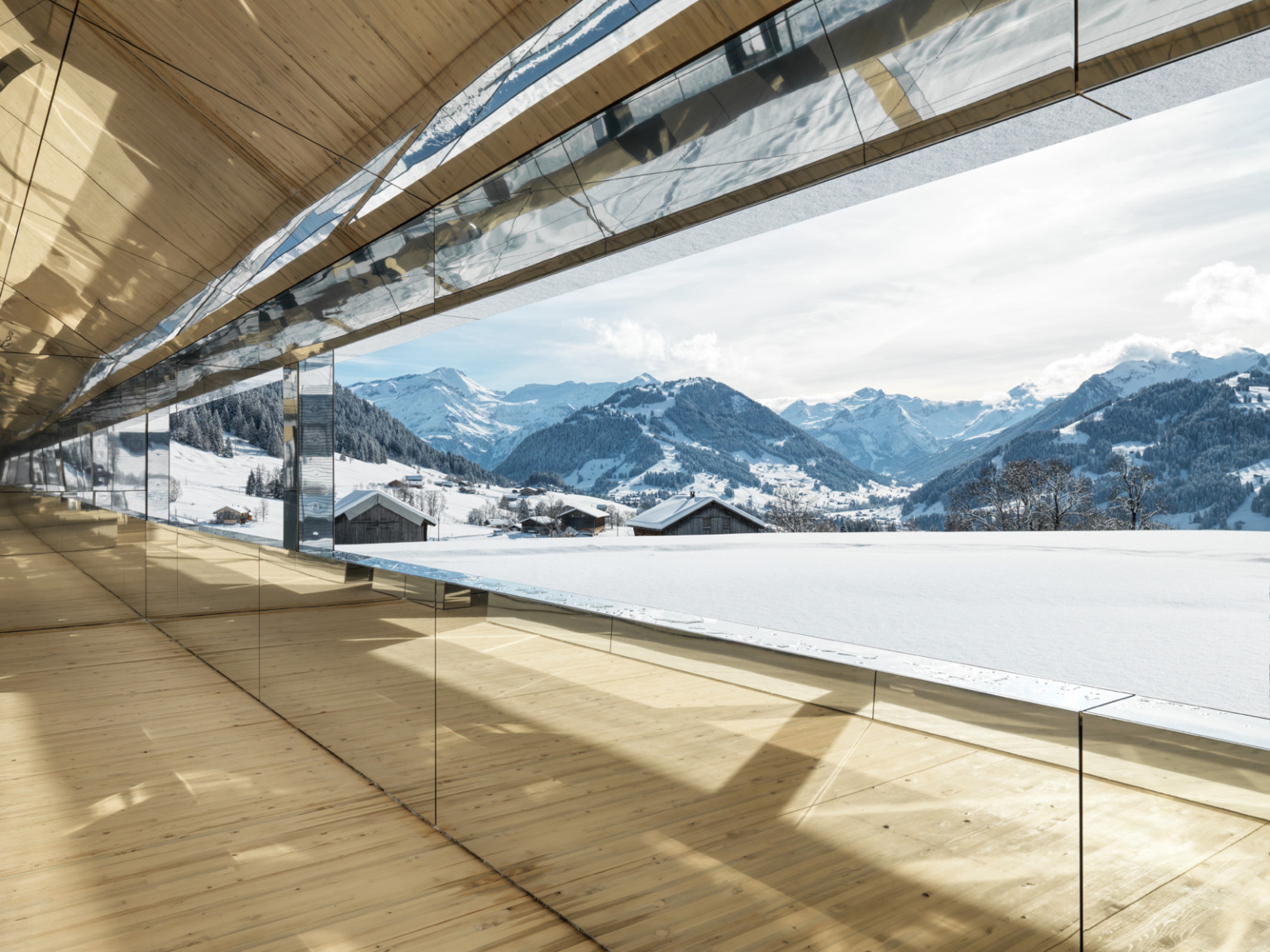 Set in a snowy field beside the vernacular houses of the Swiss Alps, the installation was designed to illustrate a contrast between the idea of manifest destiny in the American West and its presumptive settler colonialism with the staid traditions of Europe. In a way, the apparent “blankness” of the house is a mirage in itself, just as the West appeared unclaimed and ripe for the taking by European settlers in the 19th century despite centuries of habitation by Native Americans. Mirage Gstaad will remain in place and open to visitors through January 2021. 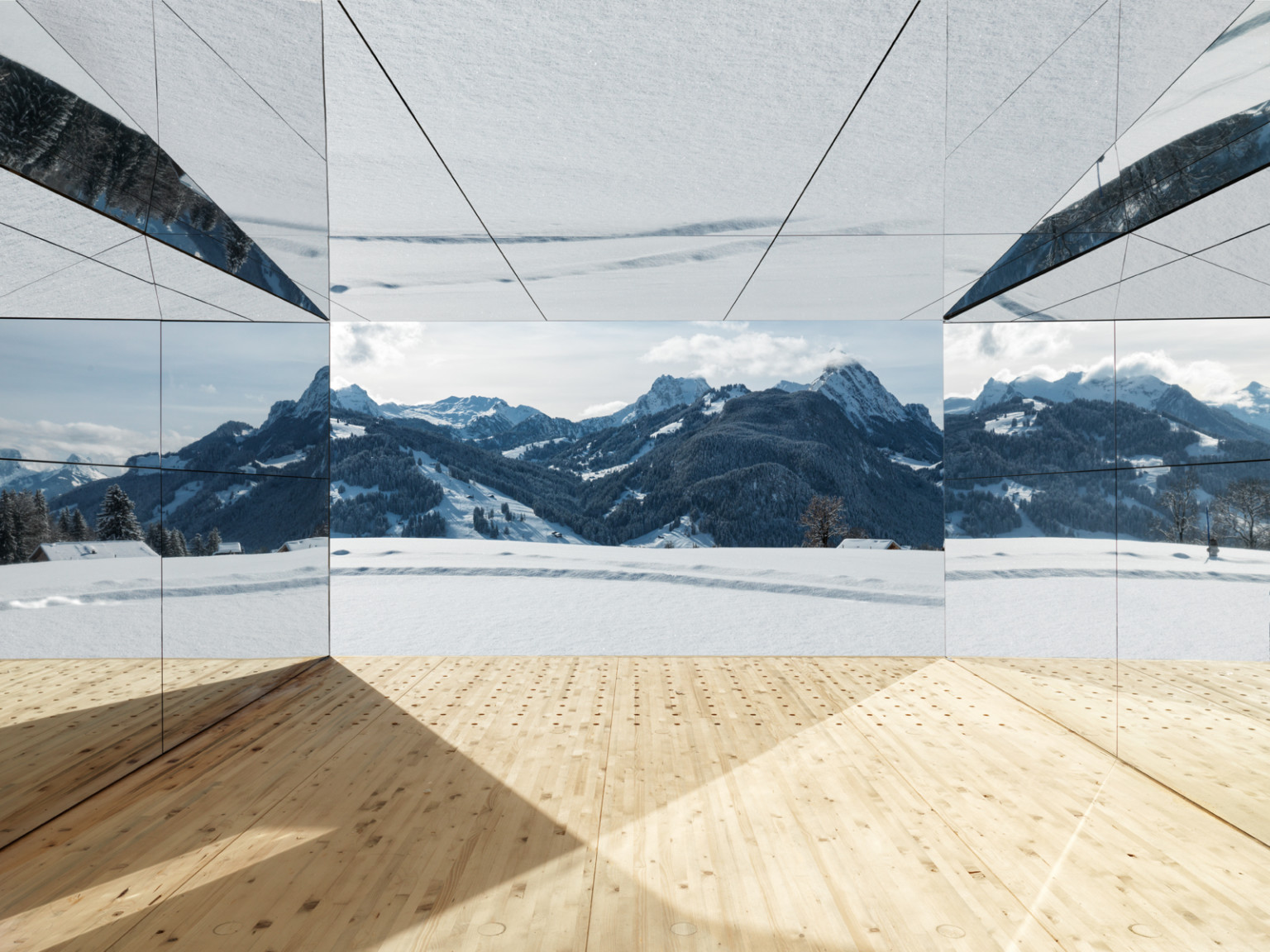 Aitken adds: “In the tradition of land-art as a reflection of the dreams and aspirations projected onto the American West, Mirage Gstaad presents a continually changing encounter in which subject and object, inside and outside are in constant flux. With every available surface clad in mirror, it both absorbs and reflects the landscape around it in such ways that the exterior will seemingly disappear just as the interior draws the viewer into a never-ending kaleidoscope of light and reflection.” 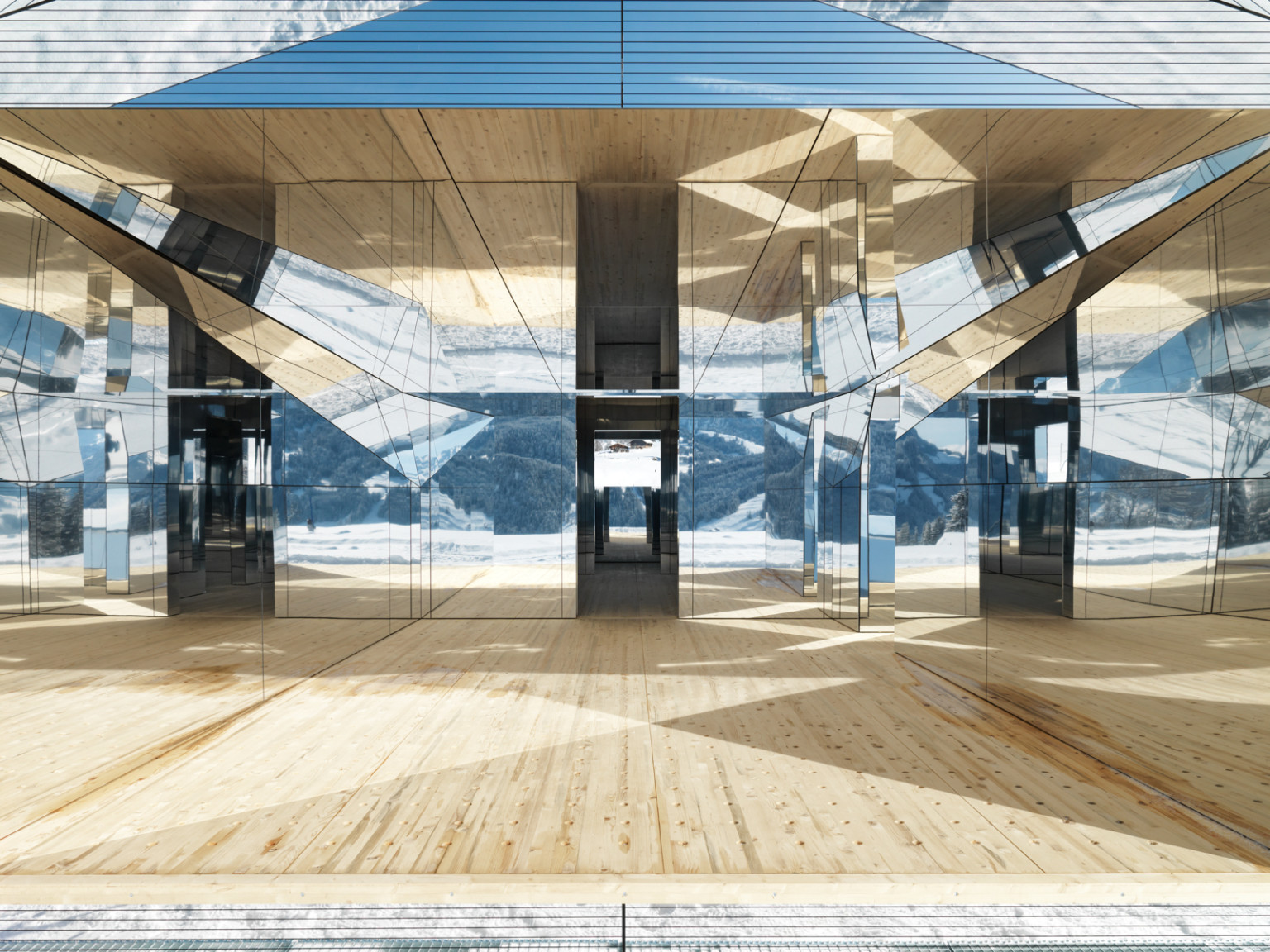 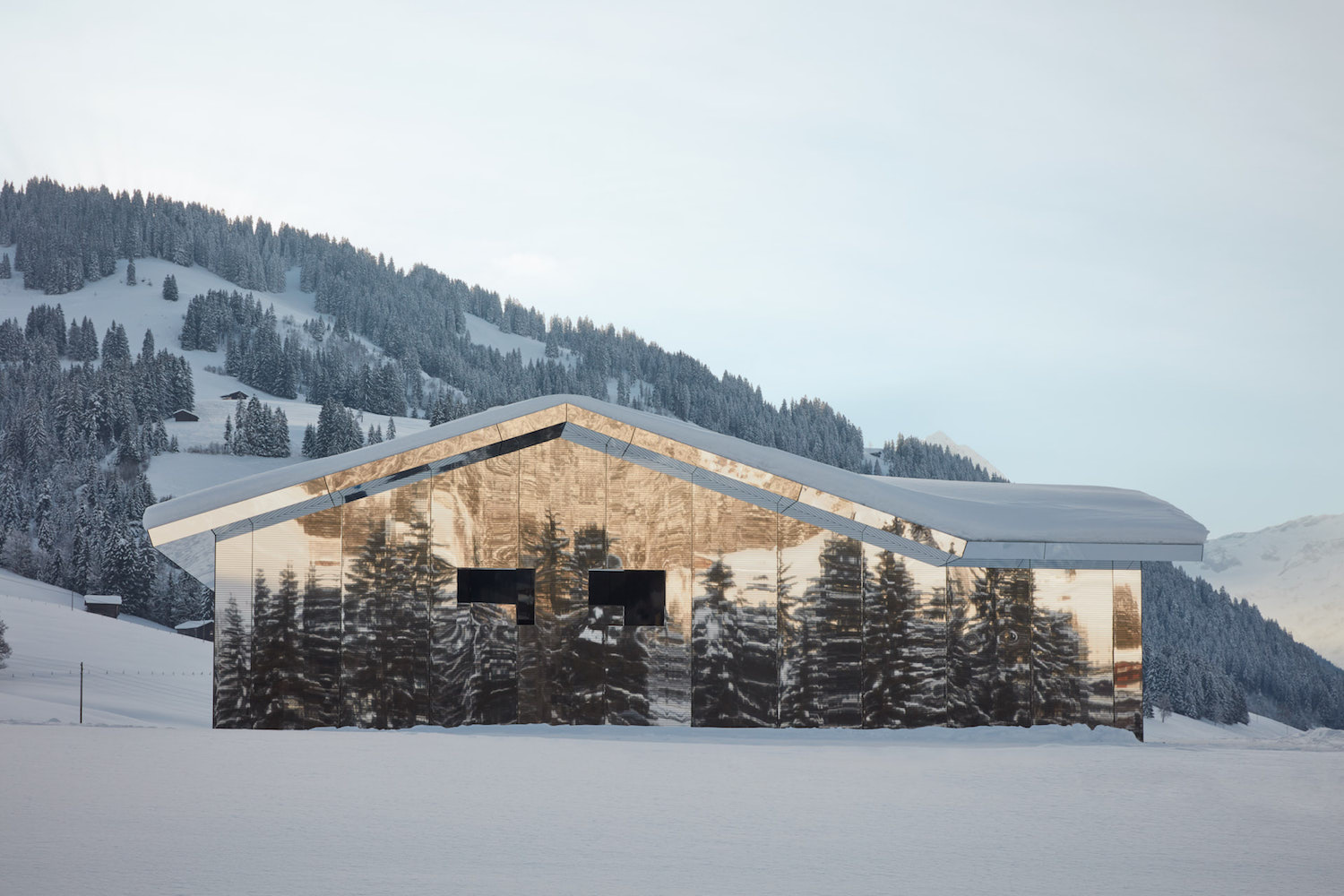 “As Mirage Gstaad pulls the landscape in and reflects it back out, this classic one-story suburban house becomes a framing device, a perceptual echo-chamber endlessly bouncing between the dream of nature as pure uninhabited state and the pursuit of its conquest. Situated against the backdrop of Videmanette in Gstaad, Mirage Gstaad will bring the idea of manifest destiny and the American West into contact with the European landscape and the tradition of the sublime.” 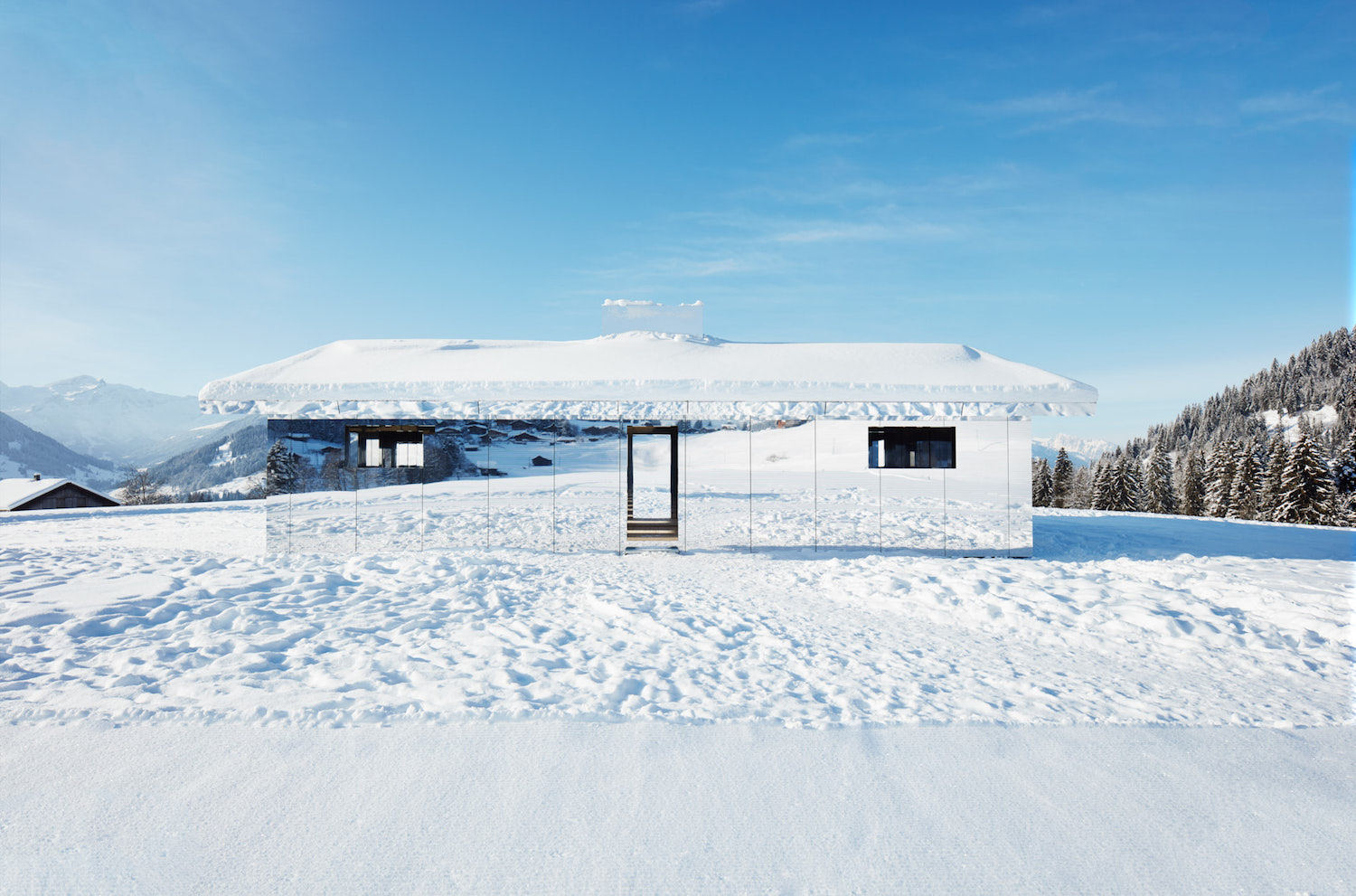 Aitken previously erected a similarly mirrored ranch house in an entirely different environment: urban Detroit. That site-specific installation, which opened in October 2018, is set within the main vault of the historic State Savings Bank, essentially “reactivating” a space that’s frozen in time. Because the old bank is devoid of natural light, lighting design played a significant role in the process, with carefully choreographed white light slowly moving through the interior to mimic the same gradual changes that are produced by the sun in the Gstaad installation.