When an old friend asked Japanese architect Junya Ishigami to build him a combination residence and restaurant, he probably didn’t expect a full-blown work of underground art. 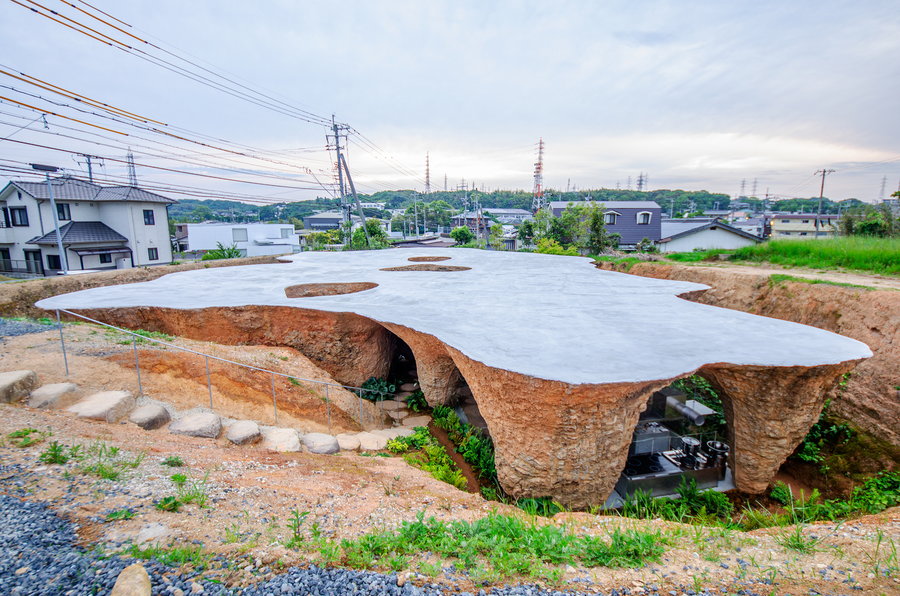 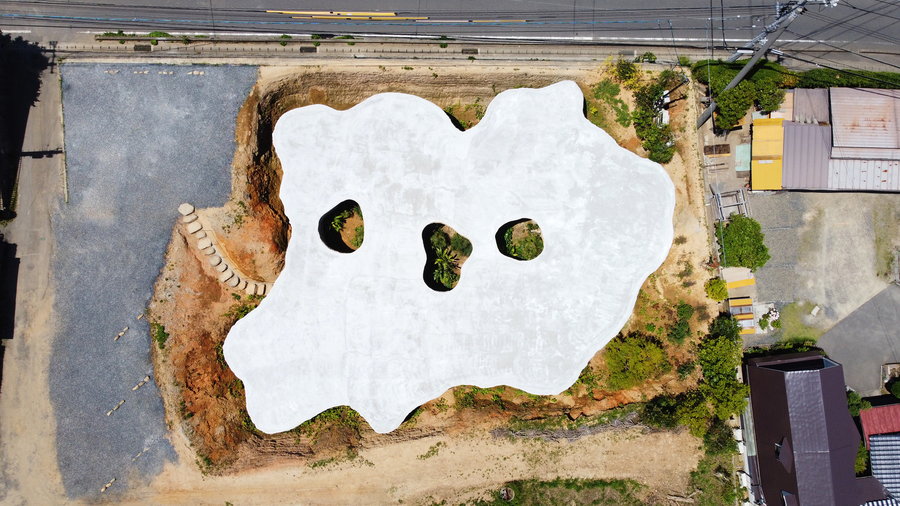 Restaurant owner and chef Motonori Hirata was looking for something brand new that felt long-established. “I was asked to design a building as ‘heavy’ as possible,” says Ishigami. “’I want an architecture whose heaviness would increase with time,’ [Hirata] said. ‘It cannot be artificially smooth but rather something with the roughness of nature. Authentic cuisines require such a place.’ He also told me that ‘it has to look as if it has been there and will continue to be there for the longest time.’” 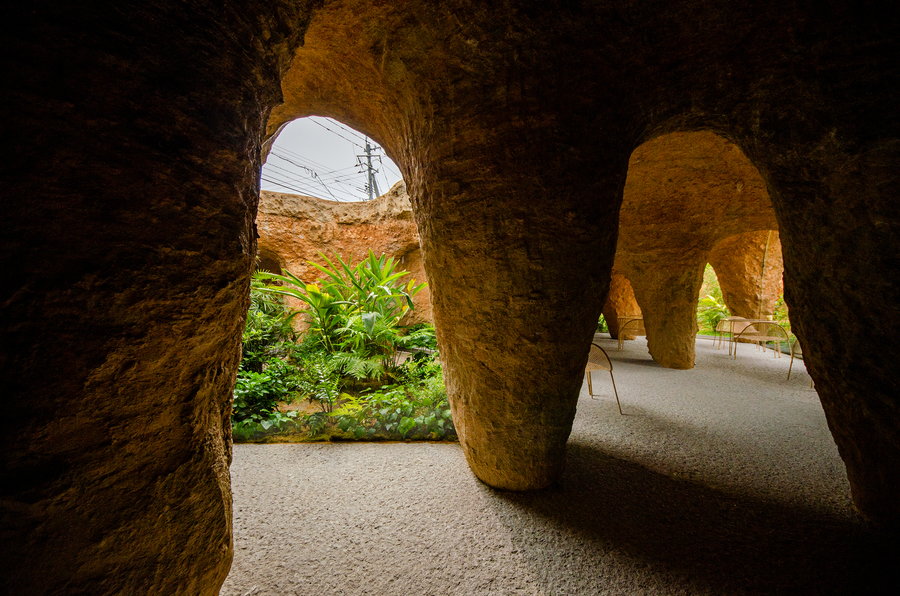 Creating such a structure in the middle of a modern residential neighborhood presented plenty of challenges. Instead of focusing on what he currently had to work with, Ishigami took a subtractive approach, concentrating on what he could have if he removed parts of the existing space. 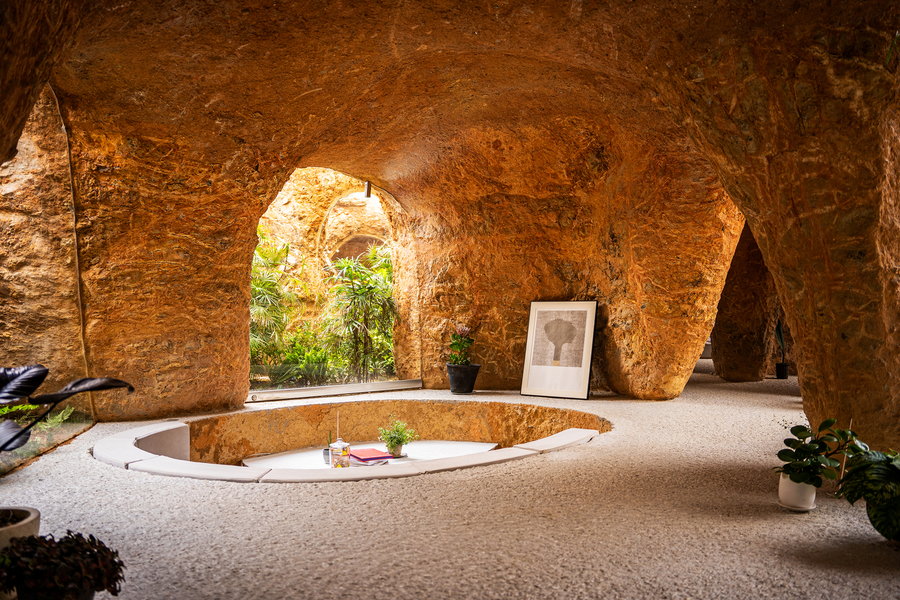 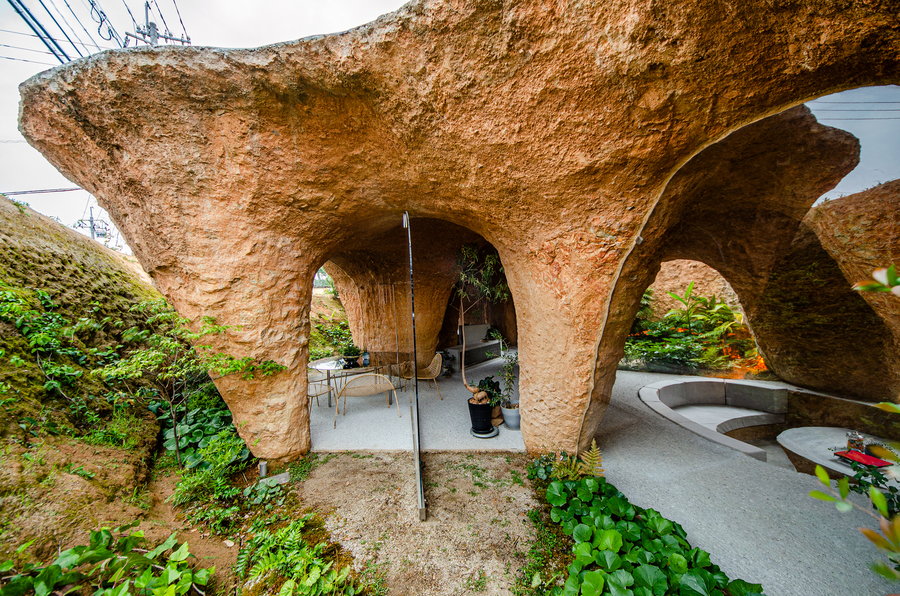 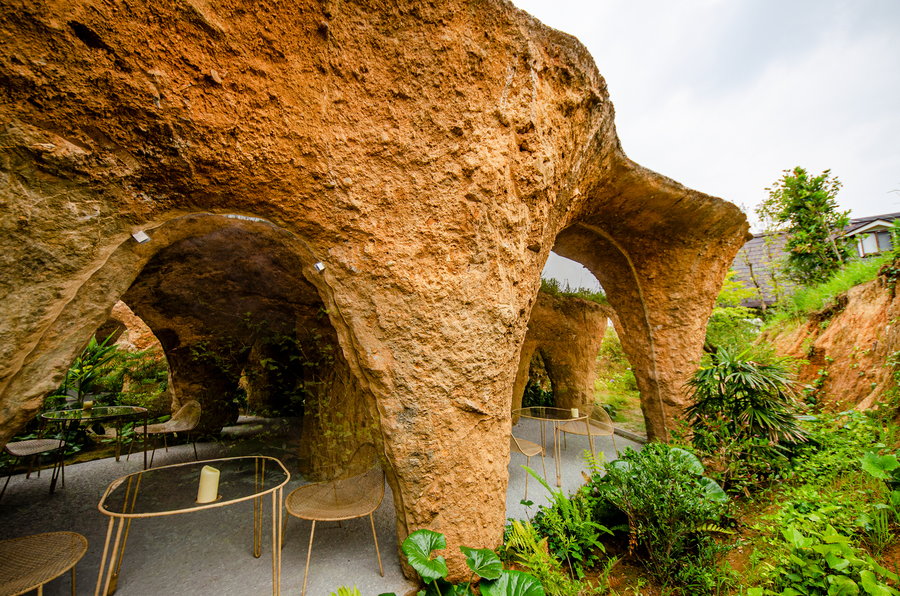 That line of thinking resulted in an underground cave dwelling that’s every bit as organic and “heavy” as it is practical and functional. Ishigami began with a design that would leave the roof of the new building flush with the ground level. Using state-of-the-art 3D software, he was able to determine the exact points for pile driving. When construction began, workers “dug the holes manually for precision while constantly confirming the position and shape on an iPad.” 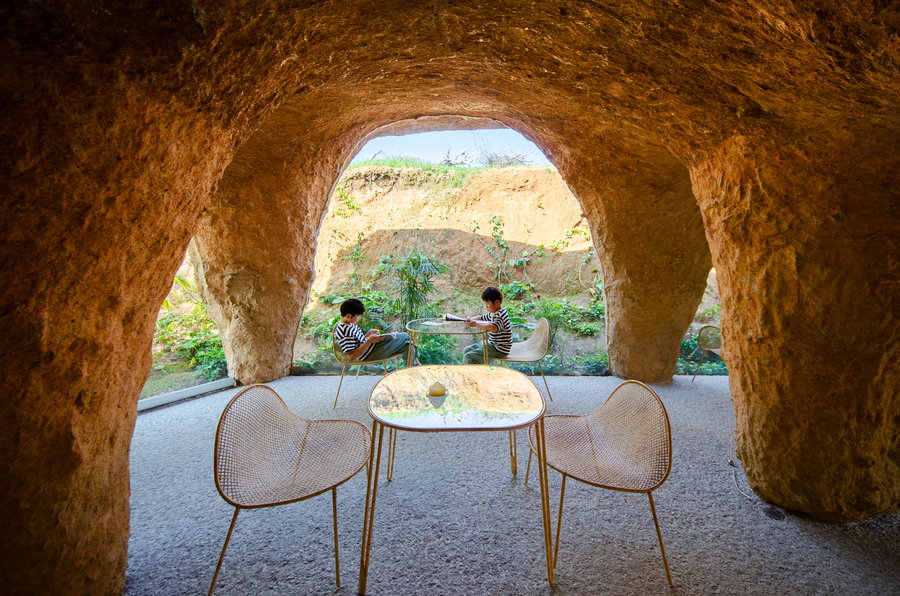 Once all the holes were hollowed out, concrete was poured in to create the form of the organically-shaped columns. Then the rest of the space was excavated to create the living and working areas.

Ishigami tried to embrace accidents as they popped up, working the unknown into the process. “Unexpected factors such as growing grass, soil collapsing, or errors due to manual labor were tolerated as much as possible,” he notes. He hoped that the by accepting these “un-precisions,” he would create an architecture that “internalizes natural distortions and uncertainties.” 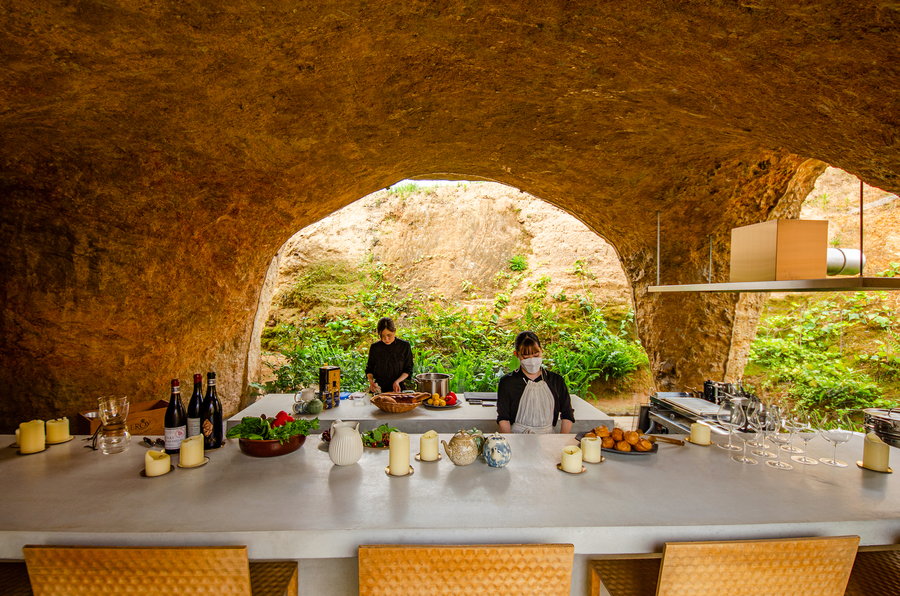 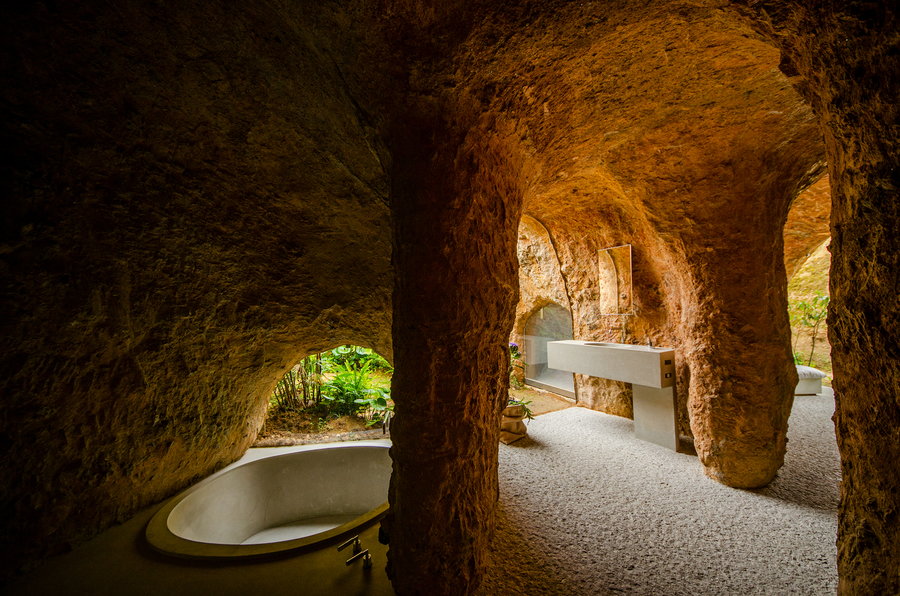 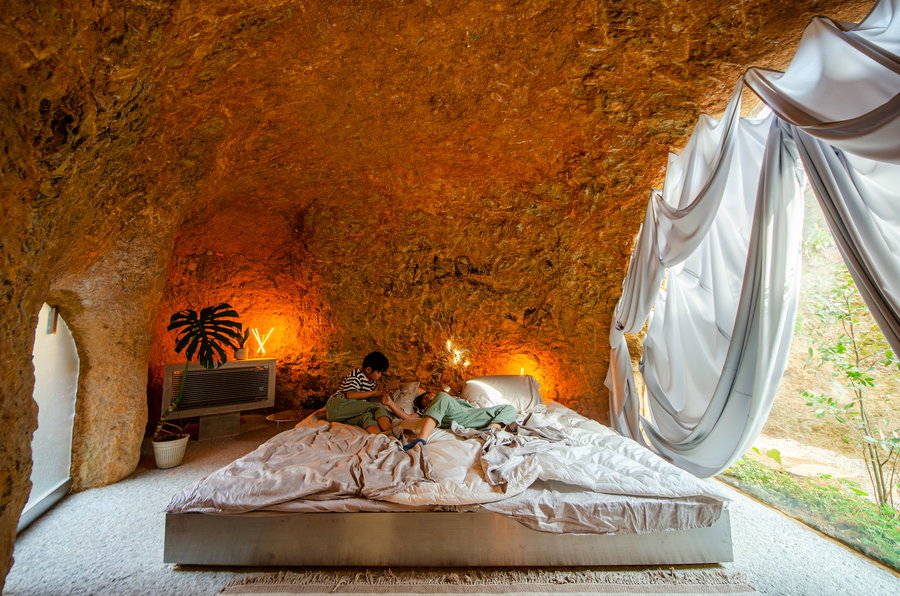 The original plans called for washing away all the dirt to reveal a gray concrete structure, but Ishigami and his team were so impressed with they way the soil-caked columns looked that they chose to leave them as-is. That decision is what gave the project its cave-like feel and inspired a redesign of the interior spaces, which now include a bedroom, bathroom, industrial kitchen space, and three courtyards that can be filled with dining tables during restaurant hours (or used as living spaces at other times). 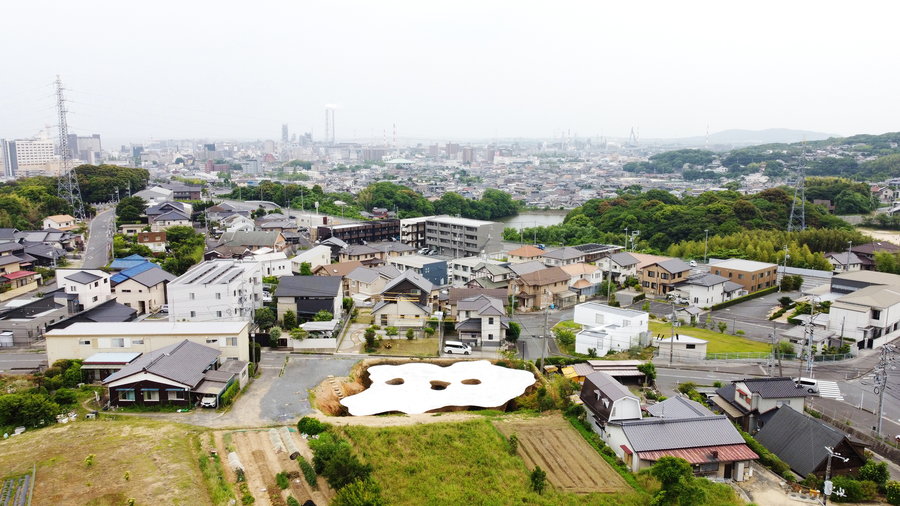 Almost imperceptible glass creates walls around the structure to keep it warm and safe from the elements. The flat roof was filled in with concrete except for three skylights, and whitewashed to keep it distinctive from the surrounding topography. 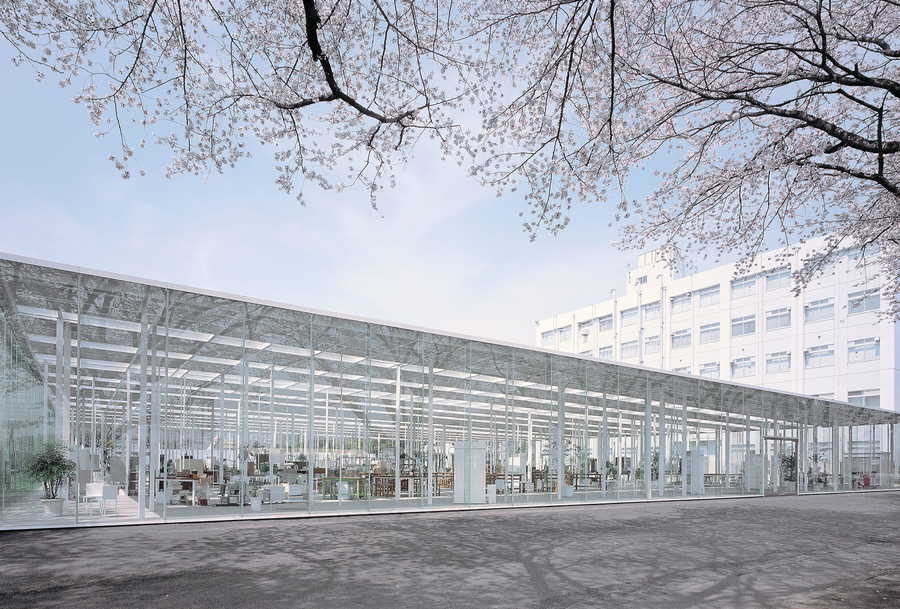 Considered a design wunderkind in architecture circles, Ishimgami started his career with Kazuyo Sejima at SANAA, after graduating with a Master’s in Architecture and Planning from Tokyo National University of Fine Arts and Music in 2000. In 2004 he started his own firm, junya.ishigami+associates, and has since gone on to win multiple awards, including becoming the youngest-ever recipient of the Architectural Institute of Japan Prize in 2009 for his ultra-thin glass Kanagawa Institute of Technology workshop. In addition to his architectural work, Ishigami also serves as the Kenzo Tange Design Critic at the Harvard Graduate School of Design.