In the southern Italian town of Matera, a system of natural caves called Sassi first inhabited during the Paleolithic Age has become a bustling tourist destination. It’s something of a full-circle moment for the city, which was once called “a national shame” by an Italian politician. Starting as a troglodyte settlement and then becoming home to peasants and artisans during the Middle Ages, Matera fell into squalor by World War II, with an infant mortally rate as high as 40 percent. The impoverished residents of the caves were forced from their homes but begged to come back, and in 1986, those who pledged to restore the Sassi were allowed to return. 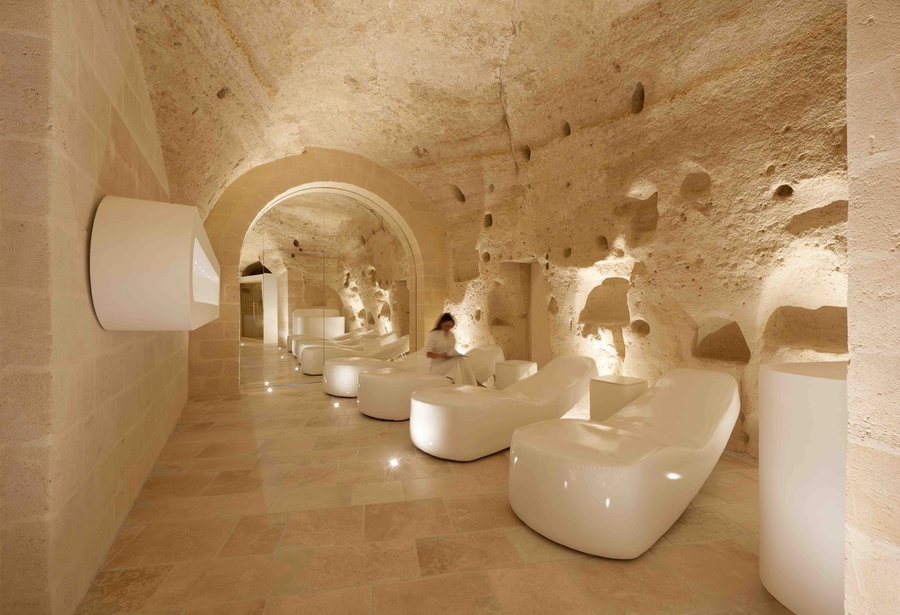 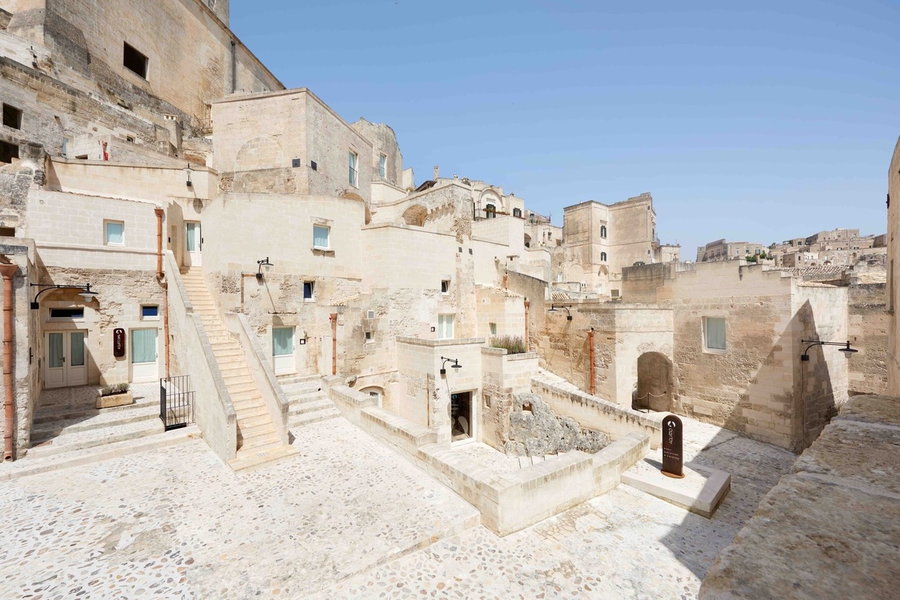 Since then, the city has flourished, and today, it draws nearly half a million travelers every year. Now a UNESCO World Heritage Site, the Sassi have become comfortable residences, bed and breakfasts, restaurants, and spas. One of the newest businesses beckoning tourists inside is the Aquatio Cave Luxury Hotel & Spa by architecture firm Simone Micheli, which occupies 5,000 square feet within an area called Sasso Caveoso. 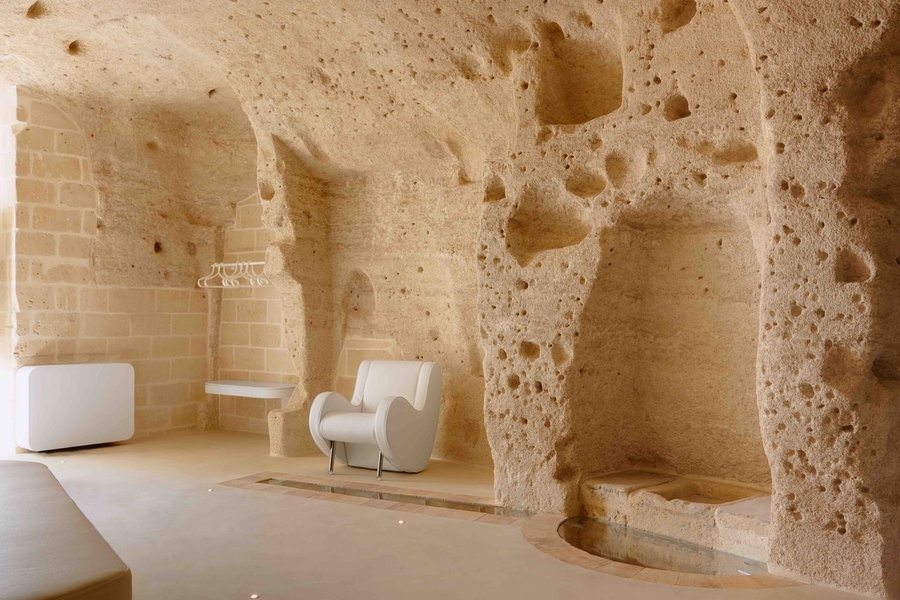 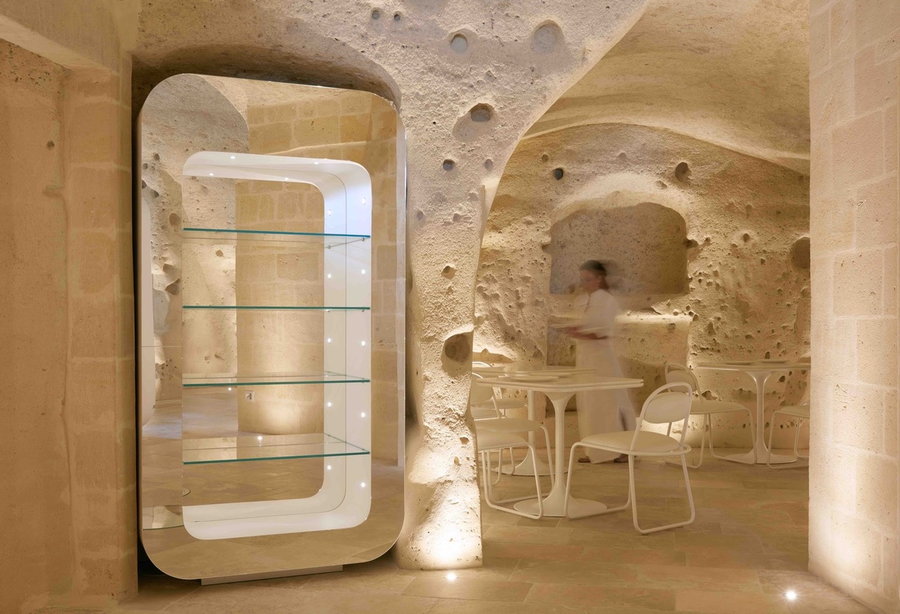 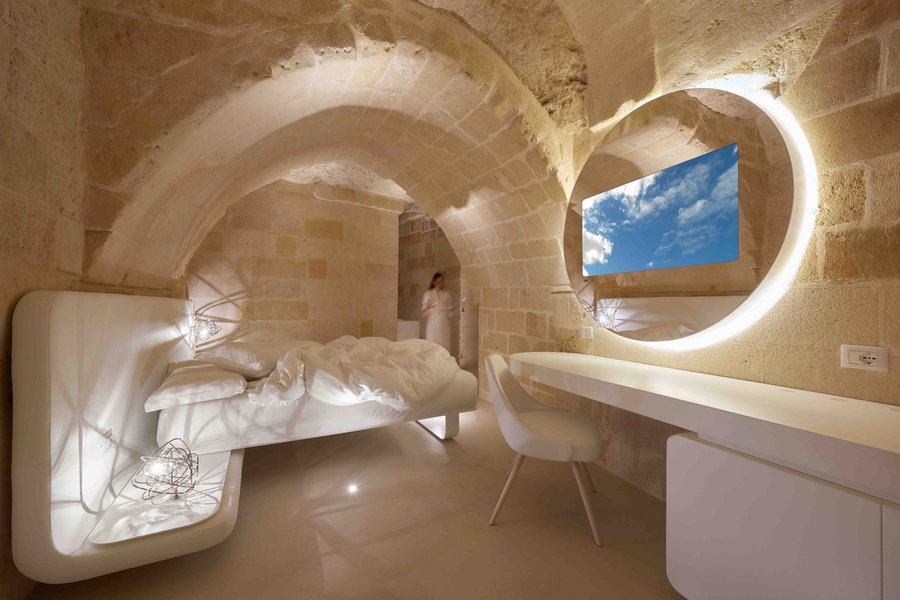 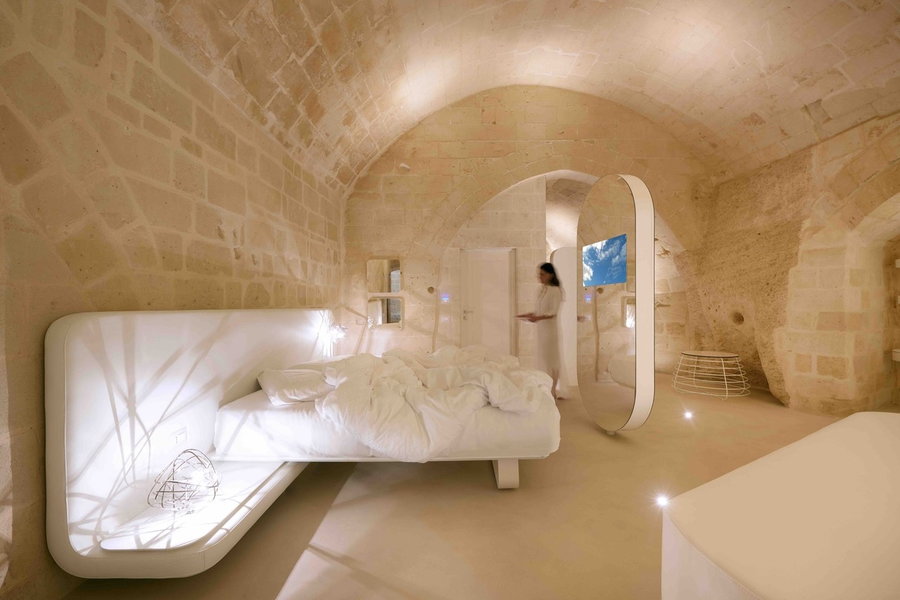 As the Smithsonian notes, the locals here still “cheerfully refer to themselves” as troglodytes, a word that literally means “cave dwellers.” But the caves don’t exactly look prehistoric anymore. Once lacking even the most basic hygienic standards, they’re now beautifully lit, packed with contemporary artwork, designer furniture, flat-screen televisions, and all the other modern amenities you’d expect from high-end hotels anywhere in the world. That’s certainly true at the Aquatio, where smooth new limestone bricks merge seamlessly into the raw cave walls, now cleaned of lichen and brightened up to their original pale color. 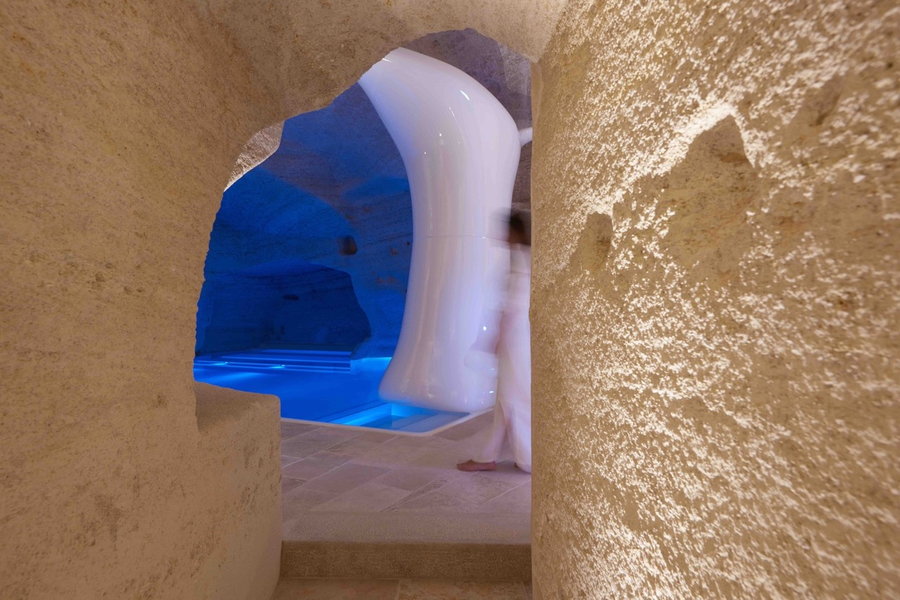 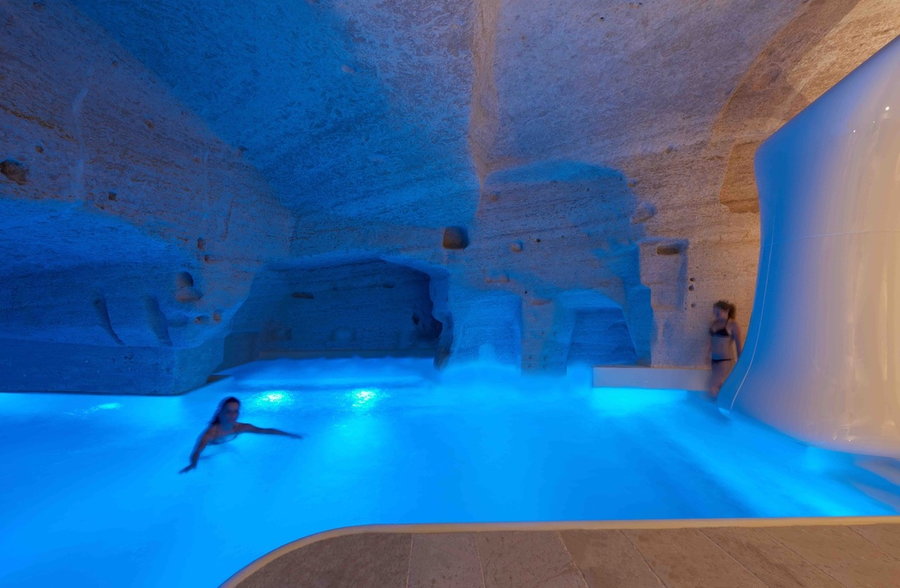 The architects took inspiration from the powerful force that shaped the caves in the first place: a single drop of water. Honored near the main entrance with a drop-shaped bronze sculpture by Kengiro Azuma, the water drop “summarizes in its simplicity the meaning of life through the metaphor of the water cycle,” says Micheli. 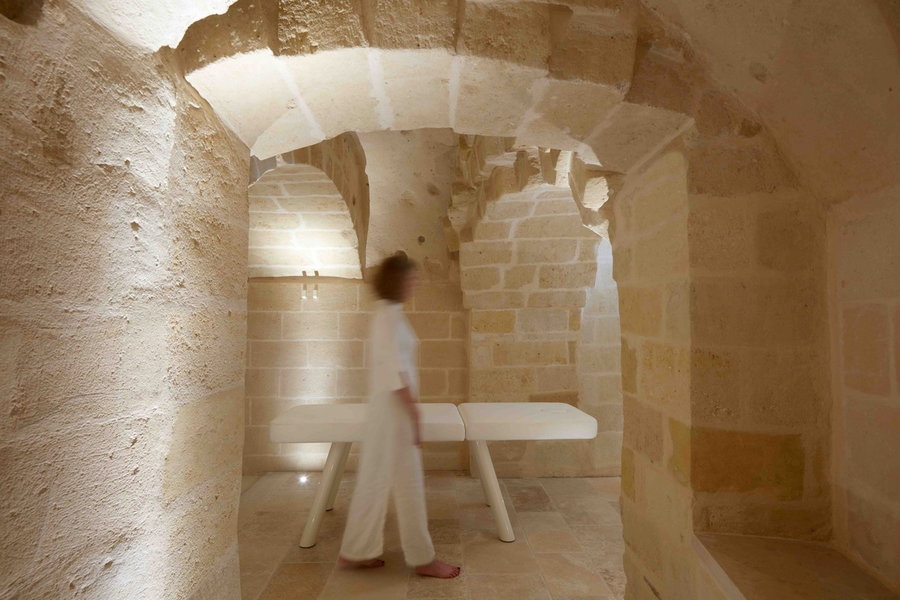 The lower entrance leads into a reception area, restaurant, breakfast room, meeting room, and wellness center in two large open spaces that were once part of a neighborhood. The arches, tunnels, ceilings, and walls are illuminated from below to create a soft glow that Micheli calls “scenographic effects.” Even the old wells and cisterns around which the ancient occupants gathered have been restored so the guests of the hotel and spa can enjoy them. 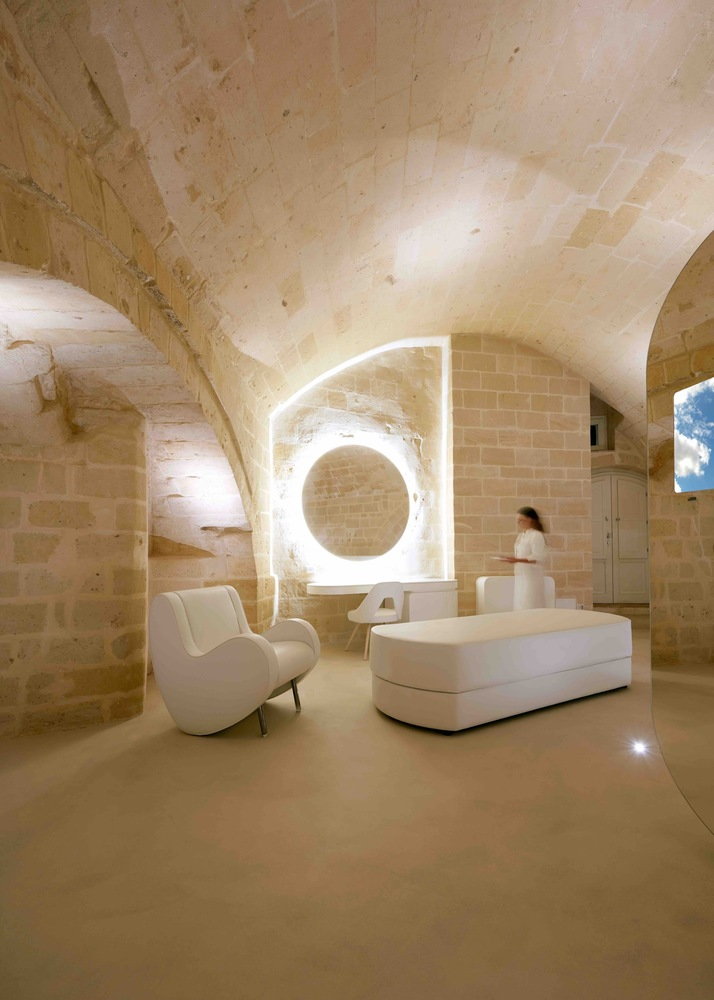 “’Creating emotions is the concept that animated the entire design process,” says Micheli. “The wellness center is the space where this motto is best expressed, in fact it is a suggestive place and occupies the deepest heart of the structure, recovering hypogeal rooms dating back to the ninth century. The restaurant room is a flexible, intercommunicating space with the breakfast room and the meeting area. Its capacity varies according to the occasions, making itself available to contingent events and needs.” 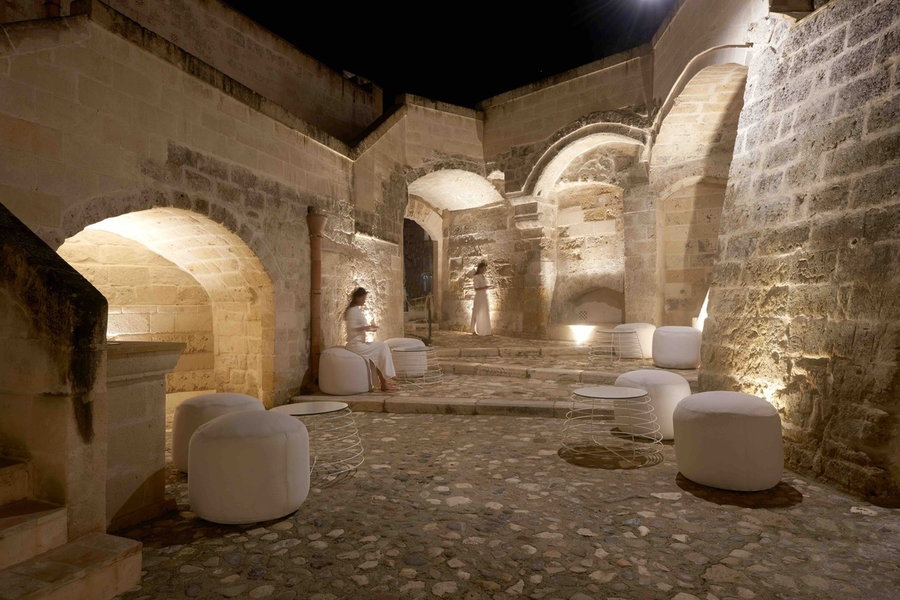 “The rooms mainly present in the upper part of the structure…enjoy breathtaking views of the Caveoso cliff and the ancient city, [while others are] hidden inside the womb of the earth, with only a door to indicate their presence as the ancient shelters of the men of the Neolithic settlements on the Murgia.”