An enormous “Bouquet of Tulips” by American artist Jeff Koons now stands outside art museum Petit Palais in Paris, paying tribute to victims of the 2015 terrorist attack that killed 130 people. The nearly 40-foot-tall sculpture features a disembodied hand holding Koons’ signature balloon tulips — a bouquet that’s one short of a dozen to symbolize the loss of the victims. 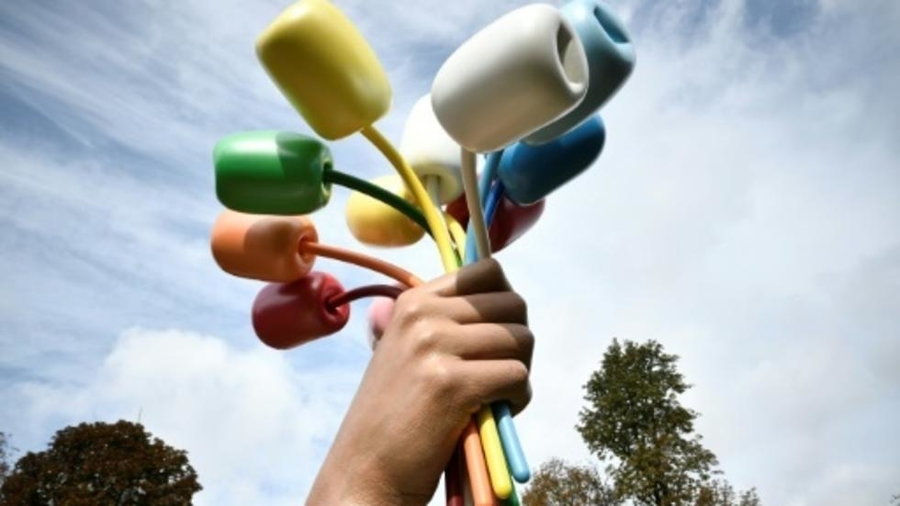 The sculpture’s unveiling has been a long time coming. It was originally supposed to be placed near the Palais de Tokyo, but officials worried it would obstruct views of the Eiffel Tower there, spending the next three years arguing about where to put it instead.

The idea first came about when Jane Hartley, former U.S. ambassador to France, suggested Koons create something to show Americans’ support and solidarity.

“I did, as a citizen in New York, experience 9/11 and the depression that hung over the city,” Koons told reporters. “It really took years for the city to be able to come to life again.”

80 percent of the proceeds from selling the sculpture’s copyright will go directly to the victims’ families, while the rest will be used to maintain the sculpture itself. The roughly $3.5 million in installation costs were paid for by a private foundation.

Reactions to the sculpture have been decidedly mixed. As the 23 French cultural figures who denounced the sculpture in the French daily paper Libération noted when “Bouquet of Tulips” was first announced, the imagery has no symbolic connection to the Paris attacks. 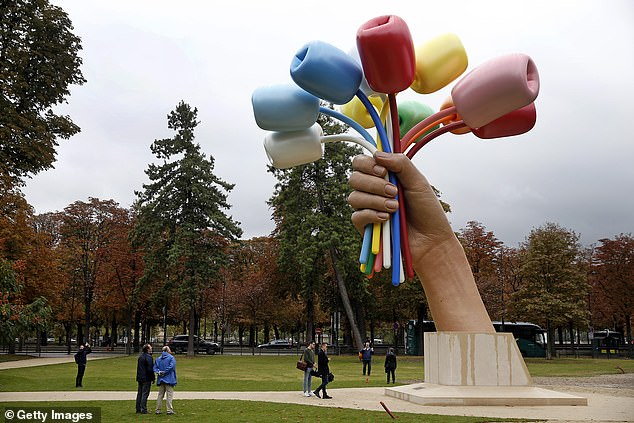 In The New Yorker, Lauren Collins wrote, “I don’t know about you, but if I were creating a monument to the victims of terrorist attacks, a pallid, disembodied hand wouldn’t be my first thought… the skin is white, of course. The blooms are pink, orange, red, white, yellow, green, and blue. Deli flowers, from us to the French people. The suspicion persists that the piece is a joke on the French, a sort of Trojan Hand meant to project American superiority rather than sympathy.”

Artnet wondered what the French people themselves thought of the sculpture and went out to interview onlookers at the Petit Palais.

“I find it truly vile,” Jean-Pierre Defaucigny, a collector and gallerist, said. “It is very, very, ugly. I can’t believe that France, which is overflowing with talented artists, would accept this. I am very sad. I won’t say what the flowers make me think of, but I find them indecent.” (If you’re wondering, other respondents were far more direct in their comparisons. You can read those here).

All in all, just over half of those polled approved of the installation, with many saying that whatever you may think of the aesthetics of the sculpture, it’s the sentiment that counts.

“Listen, I think it’s nice,” says student Arno Beringer. “It was a present, after all. Lots of people are being really annoying about it, but that’s just a classic French reaction, isn’t it? People love to criticize stuff.”

Jeff Koons has been a source of controversy in the art world since he first debuted in the 1980s. He’s best known for his kitschy balloon animal sculptures, one of which fetched $91.9 million at auction, setting a record for a living artist.