What would European trap music look like if it were visually translated into architecture? Probably something like “Villa Trap,” the new home studio designed for Madrid-based trap star Kaydy Cain by architect Javier J. Iniesta of Studio Animal. A sub-genre of hip hop that originated in the Southern United States in the early 90s, trap has since morphed into countless hyper-local styles around the world, especially Italy and Spain, where it took on a life of its own. Iniesta captured not just the spirit of European trap but also Cain’s particular flavor of it, with vivid street art-influenced interiors fittingly ensconced within gritty concrete walls. 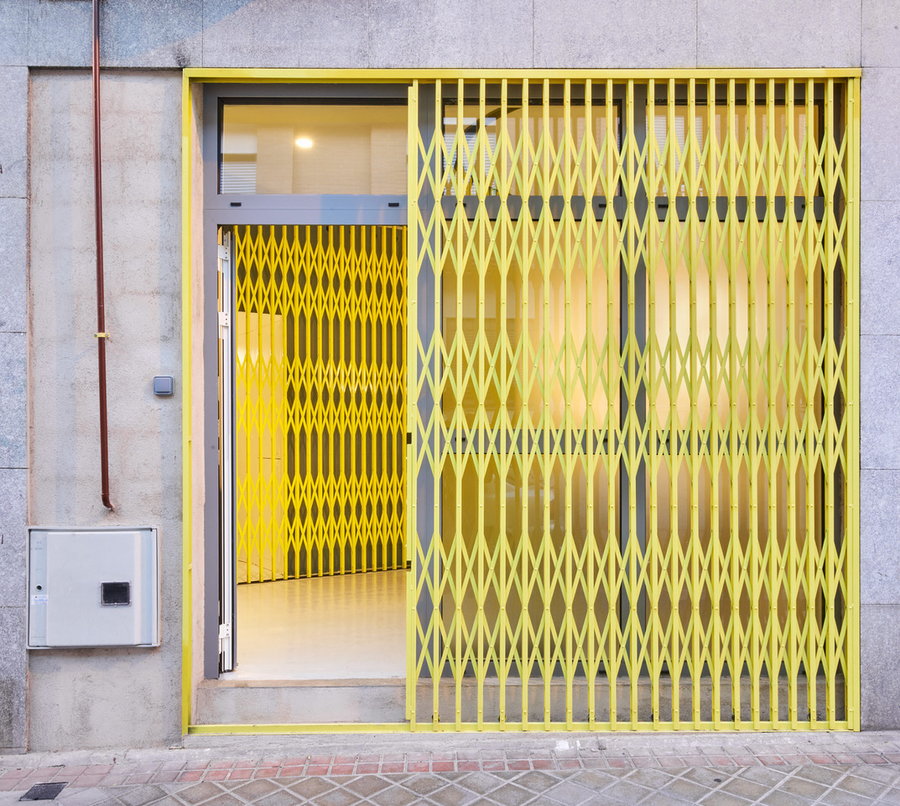 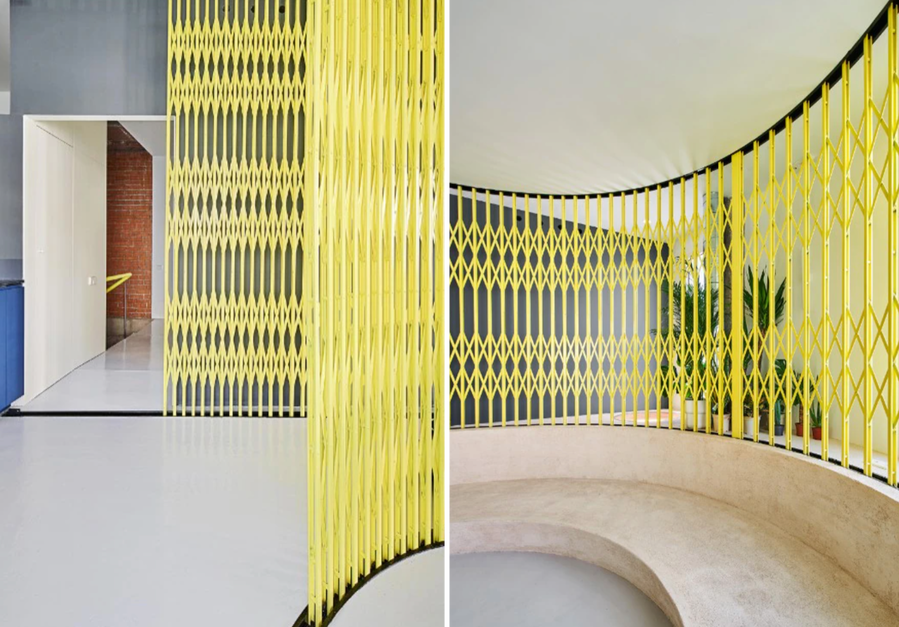 Villa Trap consists of four linked spaces that progress from public to intimate as you move deeper into the building. The first, a large street-facing room, features a dining table and curving built-in concrete banquette seating encircled by a retractible neon yellow accordion-style screen, which mimics the actual security screen outside the glass front doors. This permeable enclosure can be fully opened to make the room feel bright and accessible, or drawn completely closed almost like armor around the seating area. 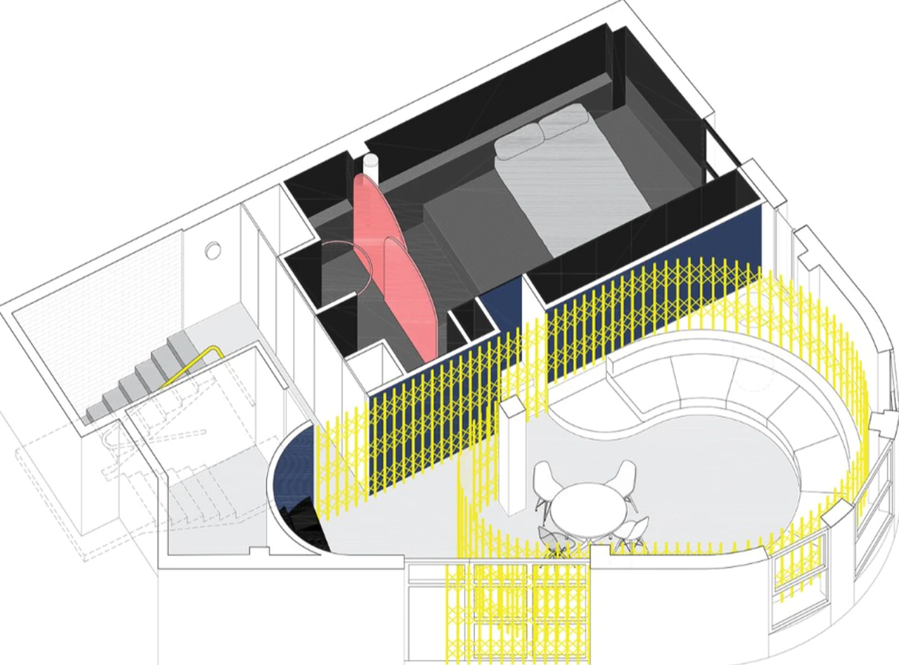 Just inside the main entrance, a small kitchen with deep blue cabinetry and a sculptural stainless steel vent hood is tucked into a circular alcove. The yellow security screen either grants or denies access to the hallway and brick stairs beyond, and from there, one can either descend into the basement studio or turn into Cain’s highly unique bedroom. 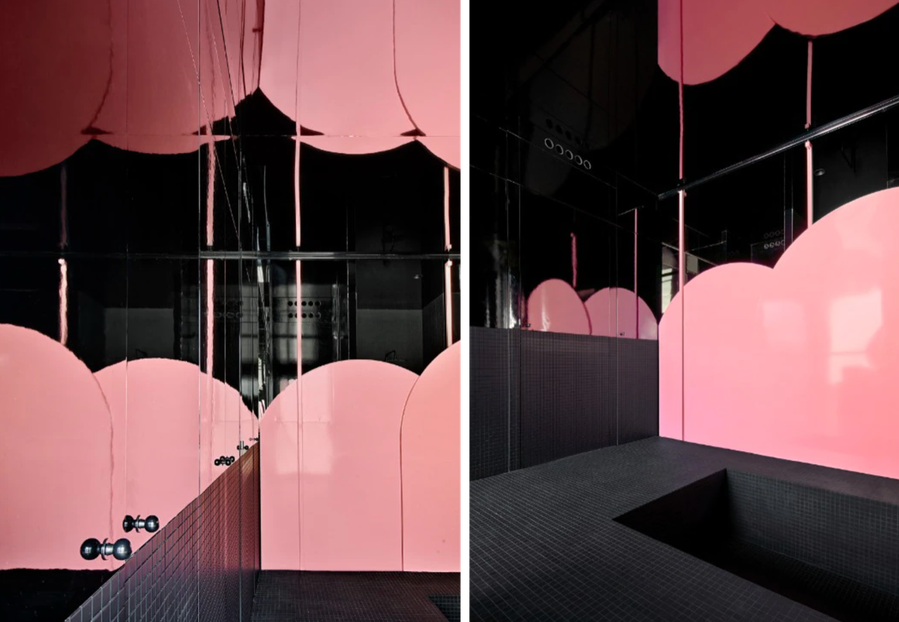 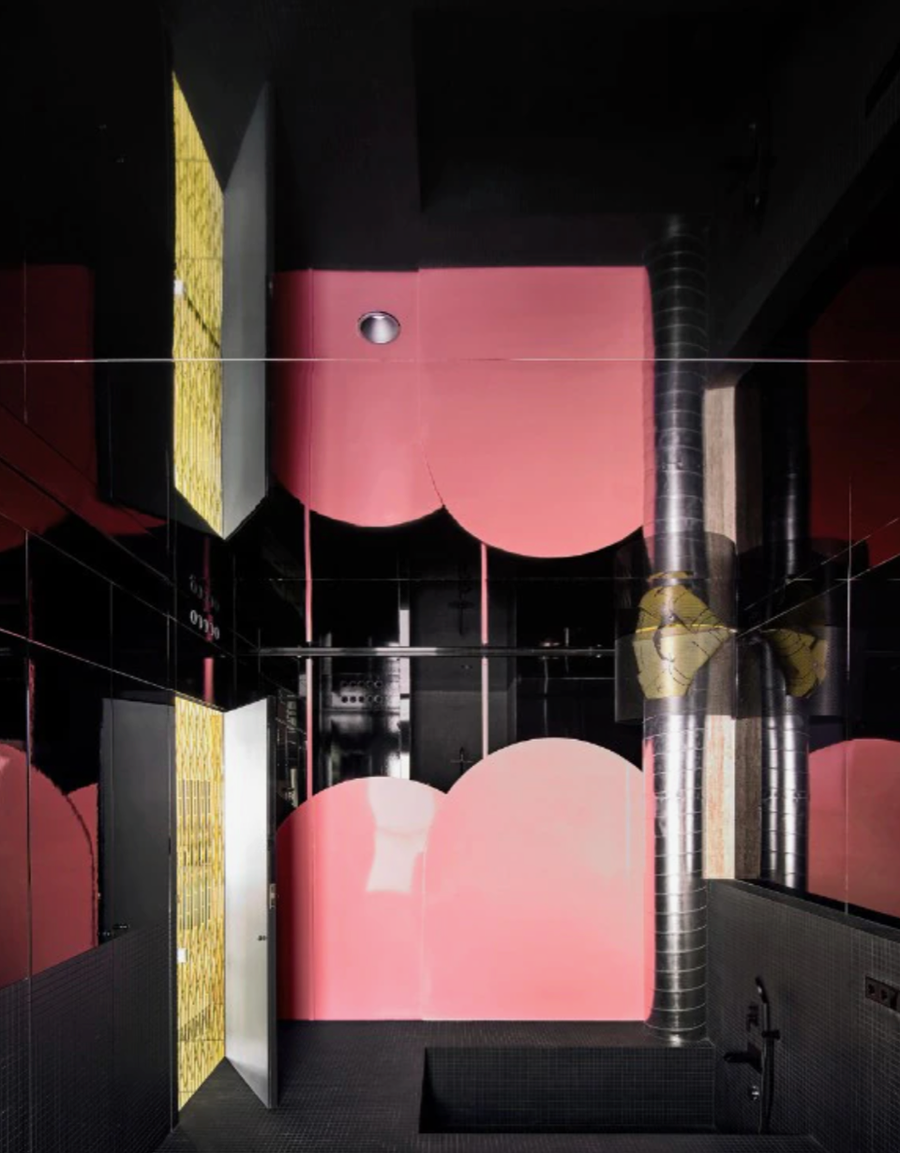 Lined with matte black tiles, the bedroom almost has a funhouse effect to it, its proportions blurred and multiplied by mirrors that stretch from halfway up the walls onto the ceiling. The first thing you see upon entering is a tub sunken into the floor, with curving pink screens separating this area from the bed for extra privacy. 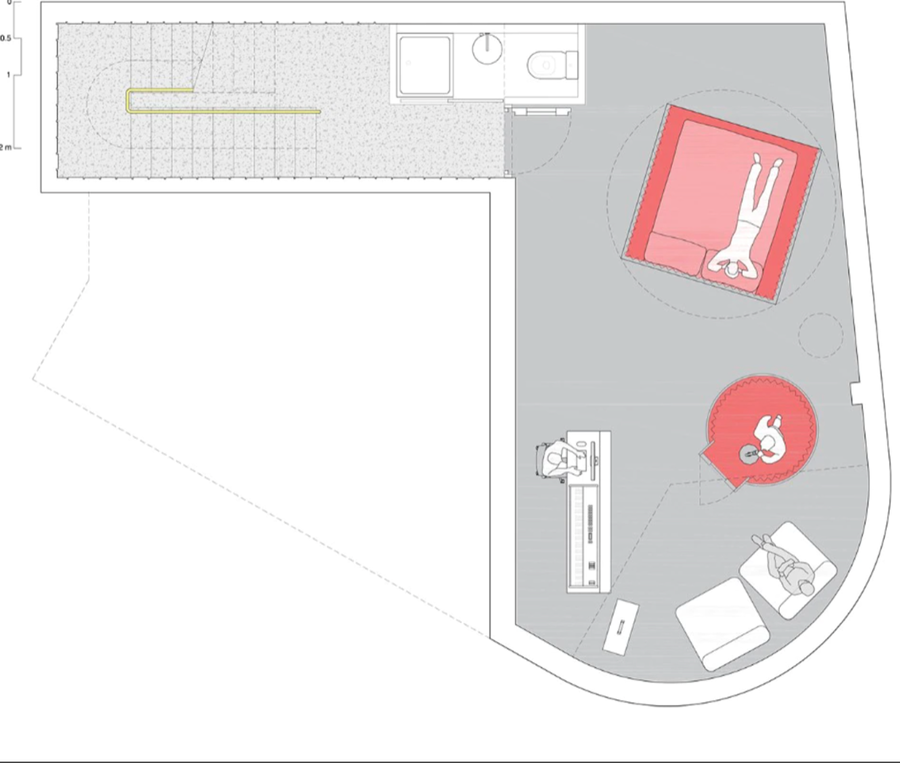 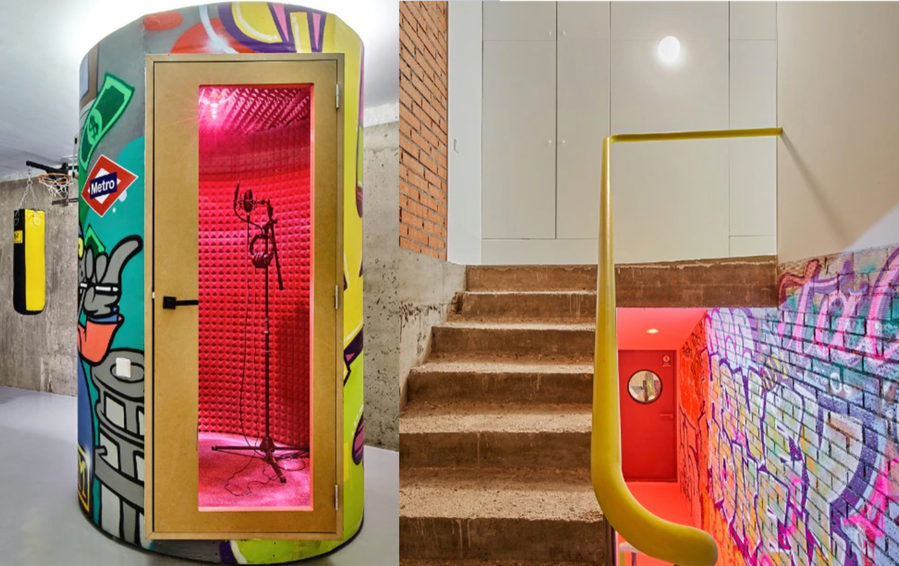 Downstairs, past a graffitied wall and a red door, the spacious recording studio offers a second bathroom, another bed, a seating area, a desk, and a central recording booth. Covered in street art and slapped with a “Metro” sticker, it looks a lot like something you’d find at a transit station, and that’s exactly the point. Rooted in urban contexts, trap often makes references to the literal streets in which it originated. Iniesta’s design for Cain’s home and studio brings the textures, colors, objects and art you can find throughout Madrid and arranges them into a sort of elevated bachelor pad – just the kind of space you’d expect a rapper on the rise to inhabit. 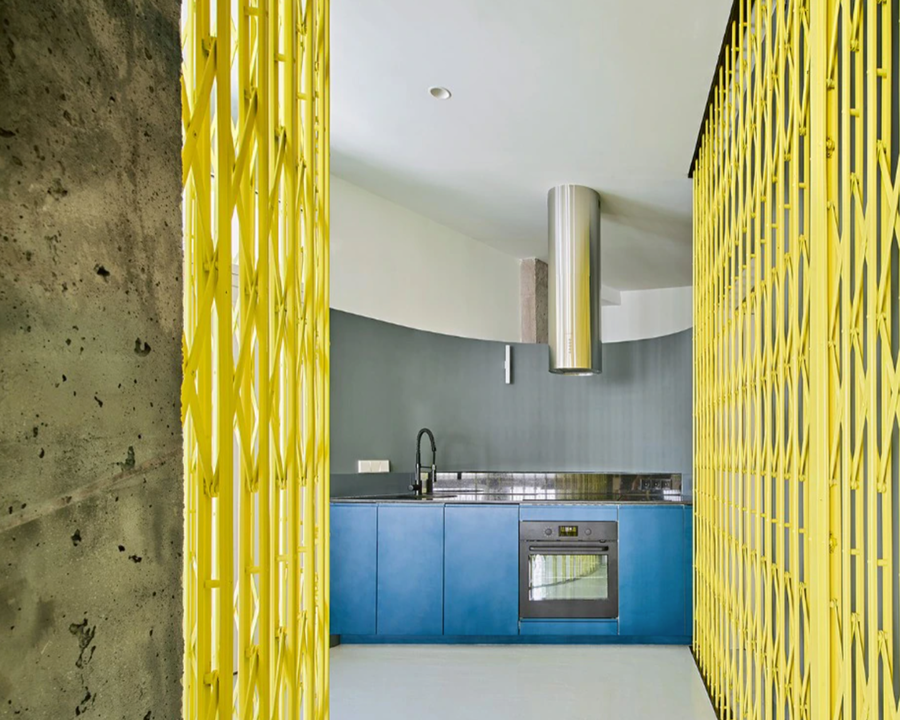 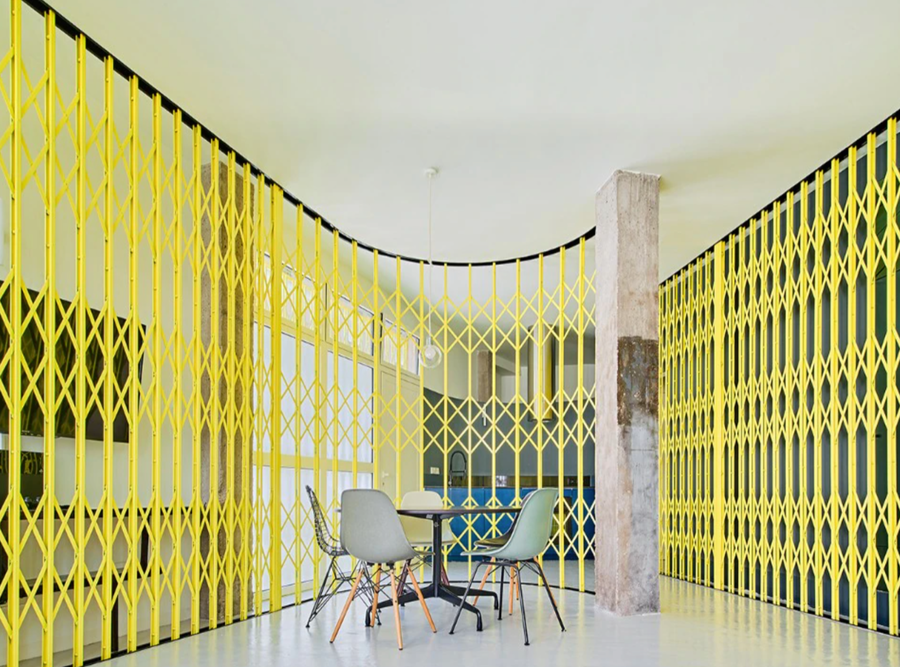 Javier Jiminéz Iniesta graduated from the Alicante School of Architecture in 2007 and later founded Studio Animal, based in Barcelona and Madrid. He explains that “Studio Animal addresses the development of proposals related to ultra-contemporary thought and its links with the habitat in which we live; the rethinking of the spaces inhabited by the contemporary subject and the atmospheres I breathe are the center of [my] work, in pursuit of a super optimistic future for the potential inhabitants of his architectures. With a progressive specialization in the design of all types of interior spaces, Studio Animal moves from the small scale of industrial design, through the planning of the brand image, to the integral design of the spatial proposal, offering tailor-made projects for each client always under a very architectural vision.”