Last November, when it was clear the COVID-19 pandemic would not end in time, the New Orleans mayor announced that the city’s annual winter Mardi Gras event would be canceled. One resident, 38-year-old Megan Boudreaux, was determined to keep the Carnival spirit alive in some form. 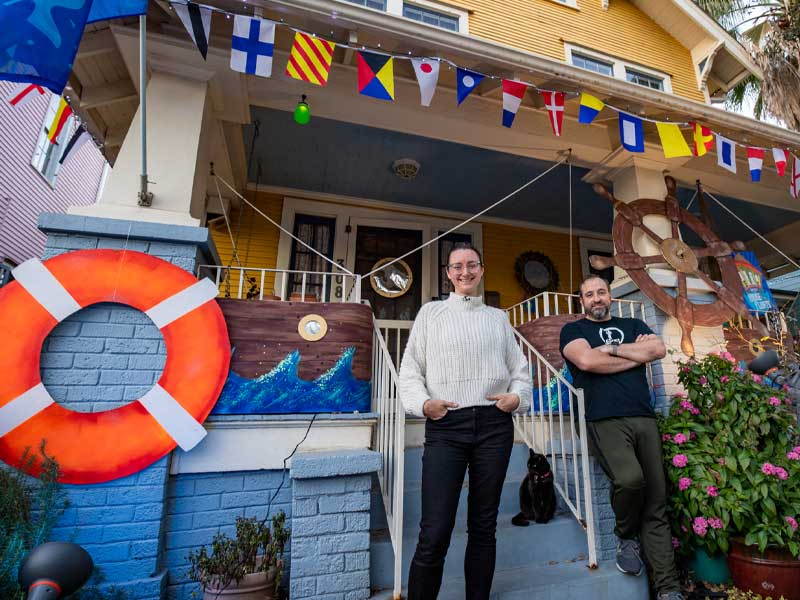 “Last year I made a bunch of origami flowers that kiddo and I passed out to people while we wandered around the French Quarter,” Boudreaux tweeted on November 17th, 2020. “Tempted to continue the theme, turn the whole house into a flower float, and pass out flowers to the neighbors while I drink all day.”

A few hours later, she was resolute. “It’s decided. We’re doing this. Turn your house into a float and throw all the beads from your attic at your neighbors walking by. #mardigras2021.” After posting her plans on Facebook, it took less than two days for her to gain 1,000 new followers. 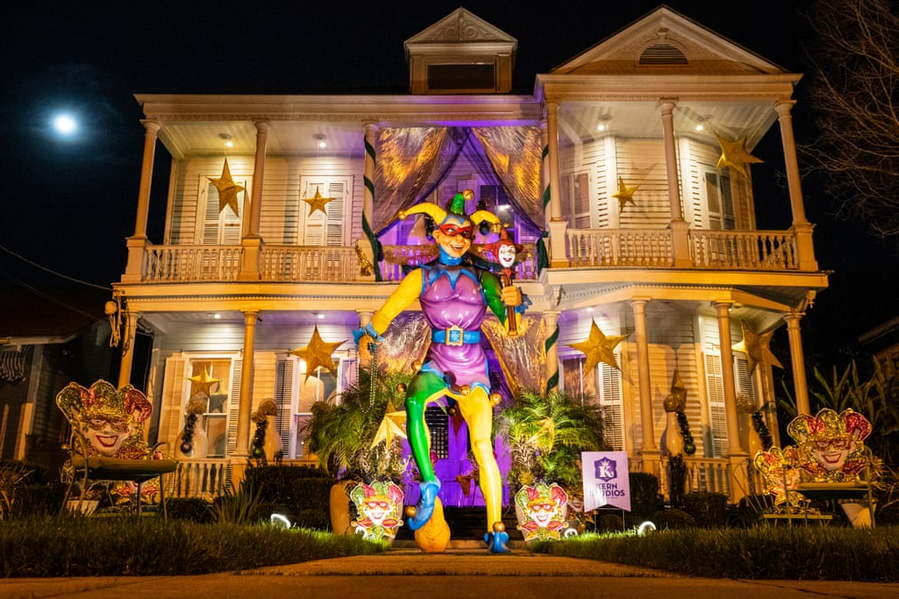 “Everyone loved the idea and wanted to jump in to make their own house floats,” she explains. “A shop owner decided to call her theme Yardi Gras, and it just exploded from there.”

Boudreaux has since decorated her own abode in the Algiers Point neighborhood, calling it the “USS Home Float” with life preservers, nautical flags, and a jumbo ship steering wheel. Fittingly, she has been dubbed the “Admiral” in her role as krewe leader. 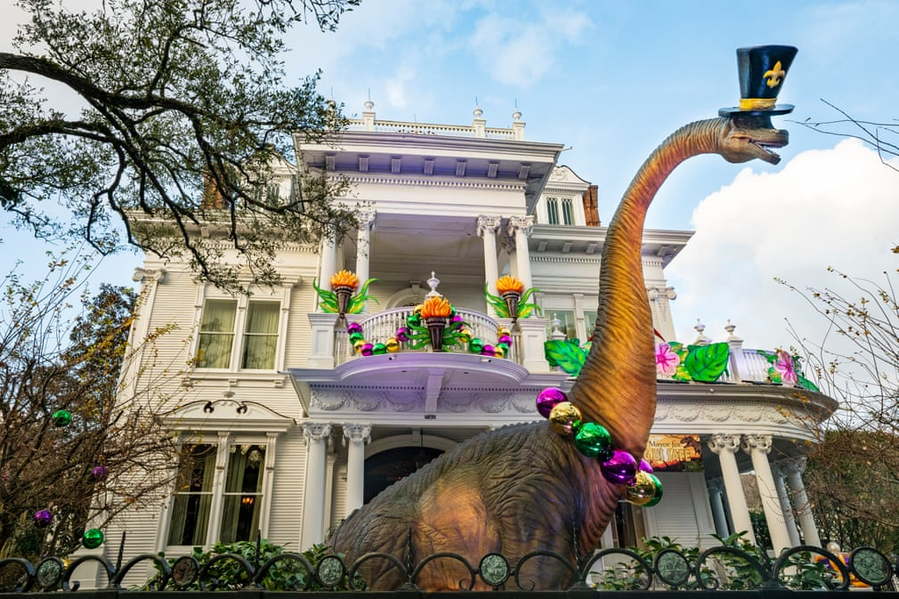 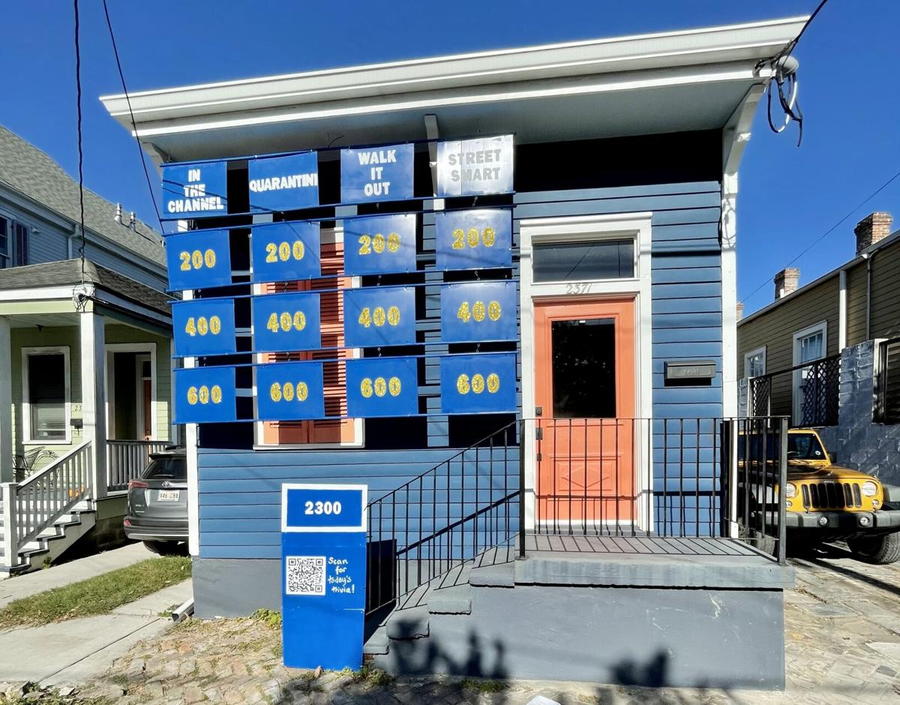 To date, there are 3,000 festooned dwellings listed on the Krewe of House Floats website. Among them are yards with giant jesters and almost life-sized dinosaurs in Mardi Gras garb. One residence honors the late Chef Leah Chase, while another gives tribute to singer Dr. John. Another features a huge Jeopardy! board, paying homage to host Alex Trebek who passed away in 2020. Dolly Parton and Bernie Sanders (with oven mitts standing in for his signature pair) are also subjects of home floats. 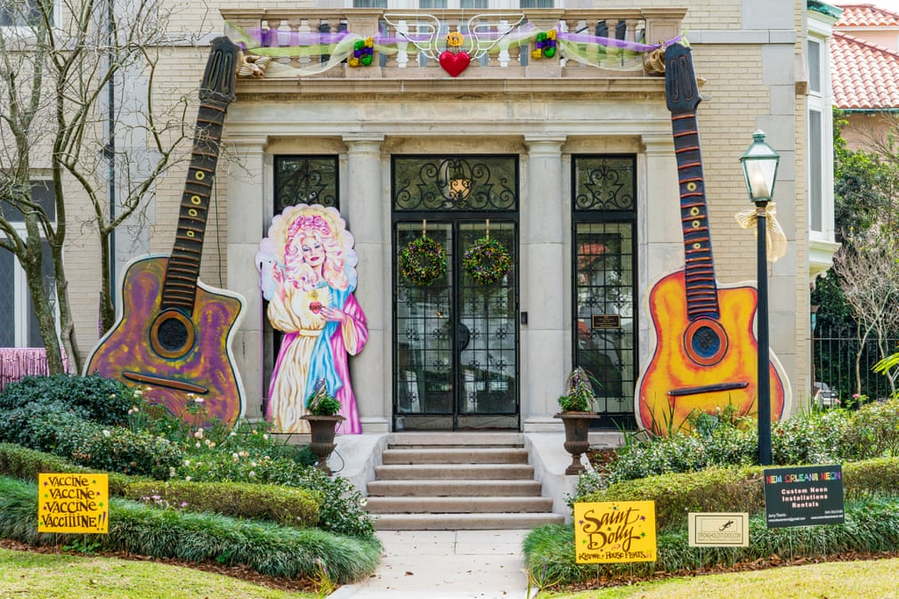 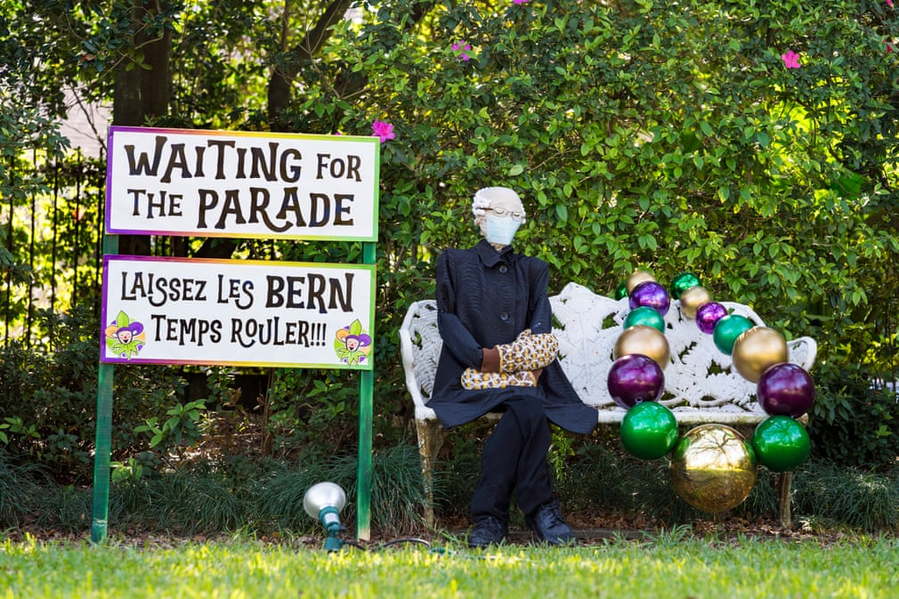 The “Yardi Gras” idea has been a godsend for New Orleans’ local craftsmen and women. Since the pandemic hit, many have struggled to find work, especially since the parade cancelation. Now there is a once again high demand for artisans who can work in paper maché, cardboard, and glitter to create the elaborate displays throughout the city.

“I’ve gotten messages from artists and businesses who said, ‘We didn’t know how we were going to get through this year,” Boudreaux says. “The fact that house floats exist, they’re keeping the Mardi Gras economy afloat.” 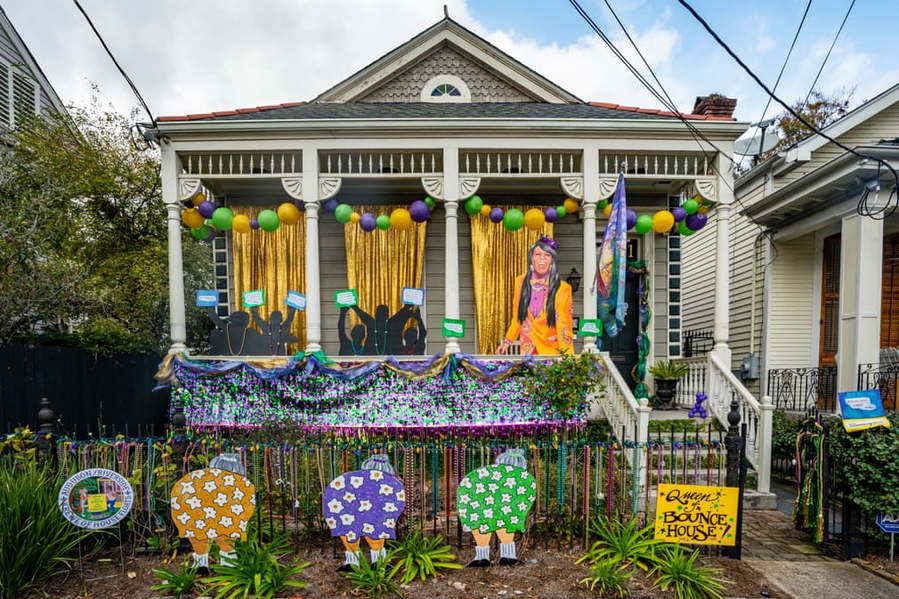 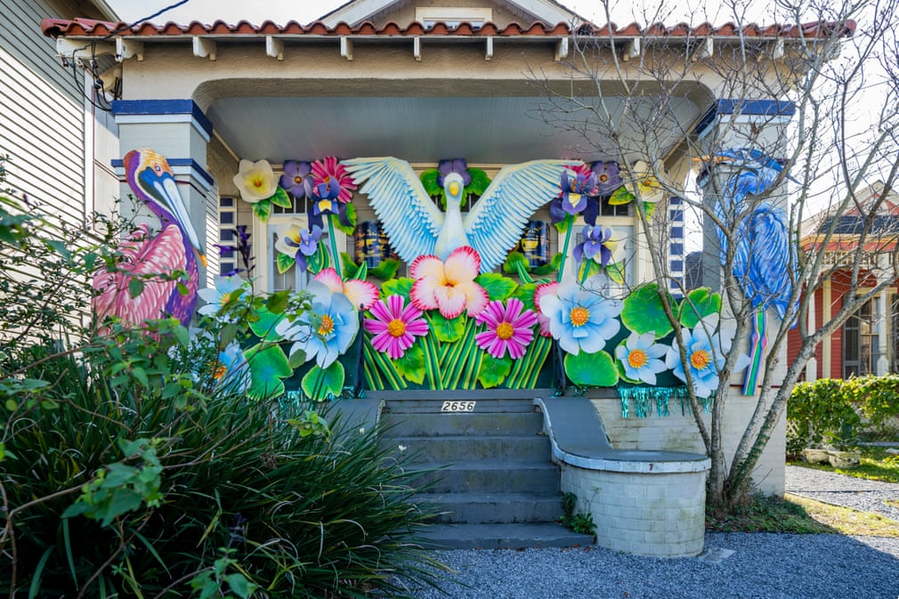 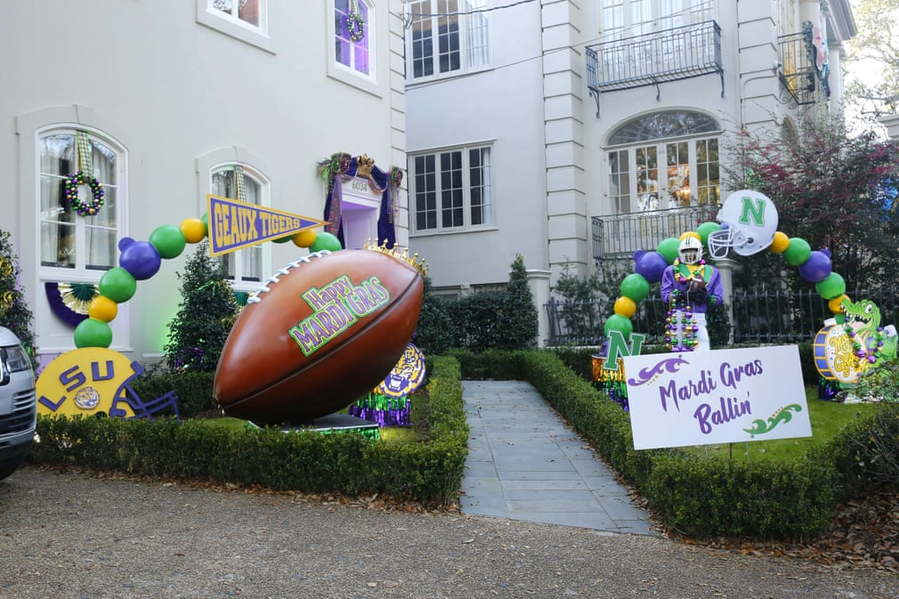 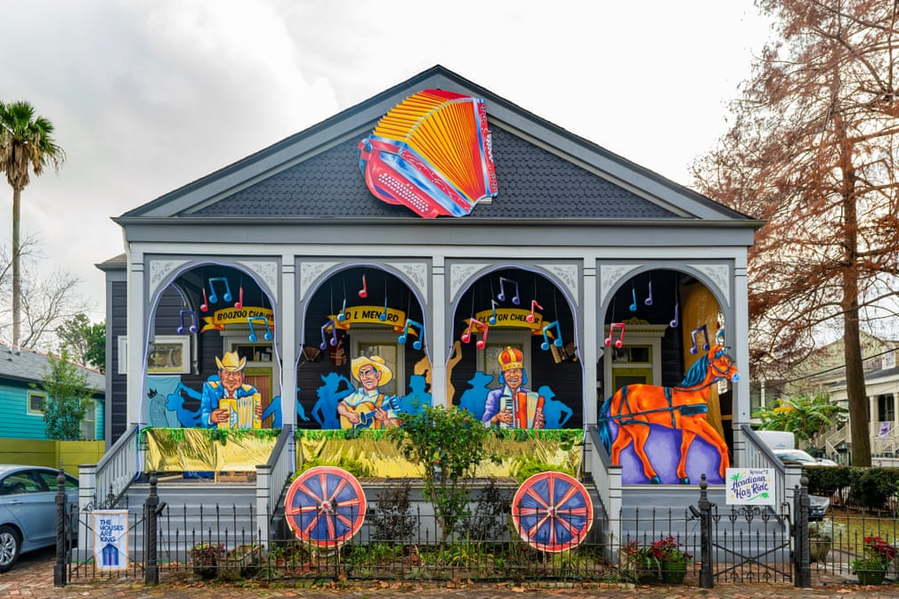 After getting flack for inviting tourists to still visit during a modified-celebration, New Orleans Mayor LaToya Cantrell pulled back, announcing that bars would be closed across the city on Fat Tuesday and packaged liquor sales would be banned in the French Quarter. High-Traffic areas, like Bourbon Street, would be closed from 7 P.M. to 3 A.M. to discourage gatherings. 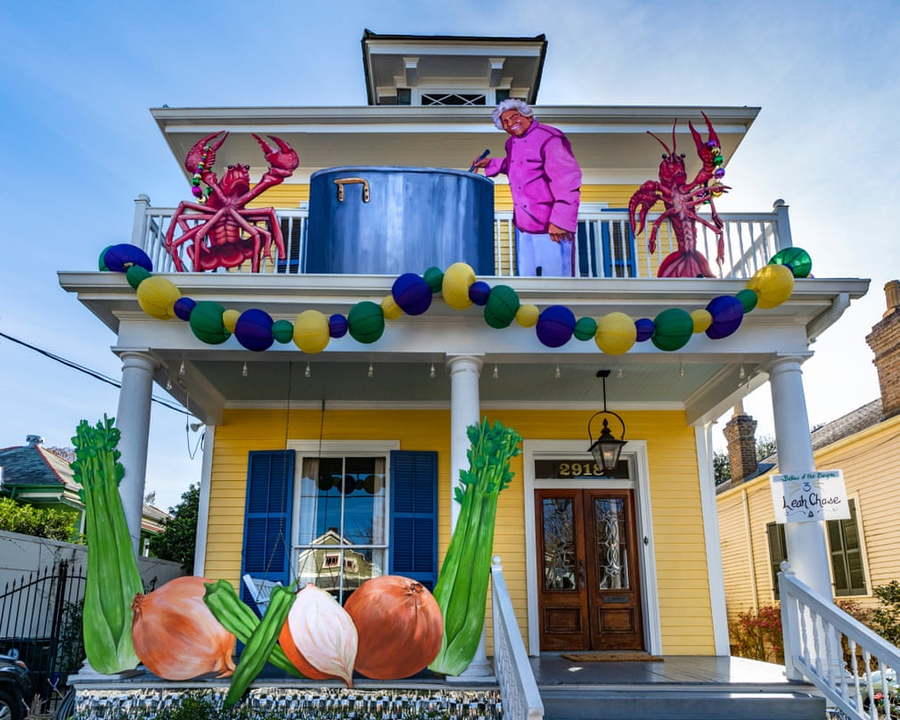 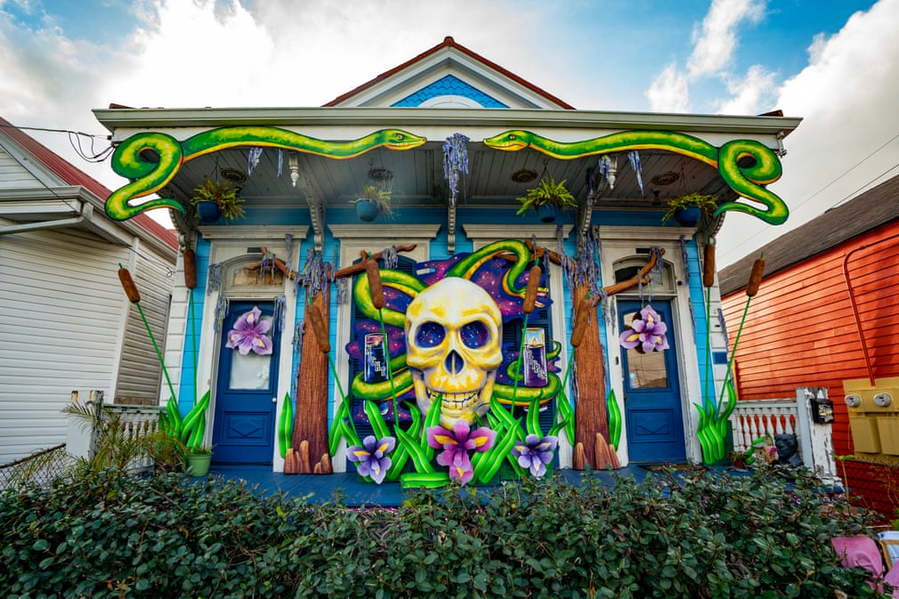 Boudreaux stresses that the Krewe of House Floats is a strictly social-distanced event.

“The pandemic is raging throughout the whole country. It would be irresponsible of us to say, ‘Yeah, please come visit New Orleans,'” she explains. “We want people to be safe.” To help more people enjoy the event, the website includes a map of participating houses, including pictures, allowing out-of-towners to tour the neighborhoods virtually. 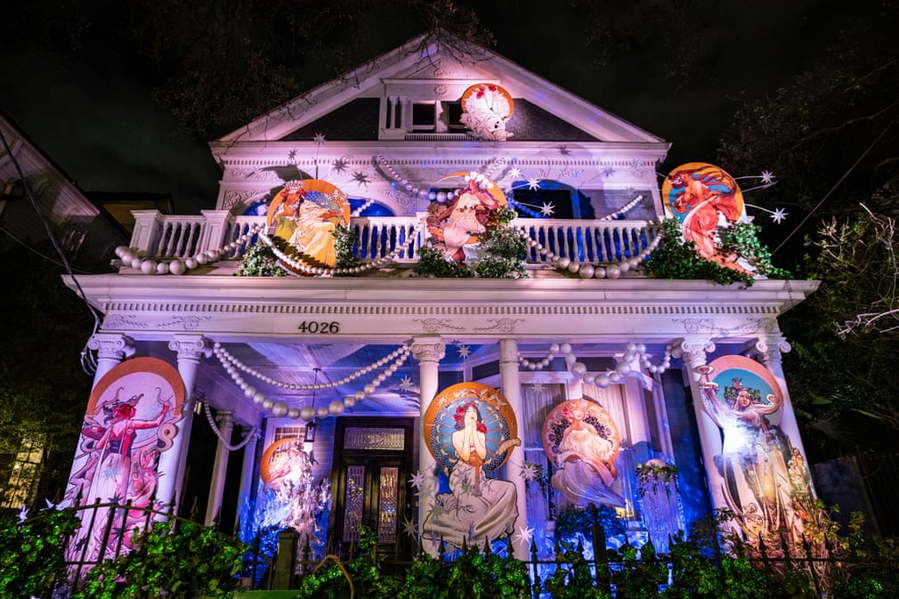 Asked about whether the stationary floats will continue into 2022, Boudreaux says, “At this point, it’s my baby. We might not get thousands of house floats, but I think it will continue. My feeling is, ‘Why not pull out all the stops?”