What is it about Friends that has Gen Z so obsessed, 27 years after the show originally aired in 1994? Some of them weren’t even born yet when the show ended 10 years later. Maybe it’s a sort of wistfulness for an era in which friendships formed more naturally instead of through our computers and phones. Maybe it’s because everything seemed a little simpler back then, when everybody apparently had time to just chill at a coffee shop for hours every day. Or maybe it’s just a shared fantasy in which we imagine that any of us could actually afford Monica Gellar’s spacious New York City apartment. 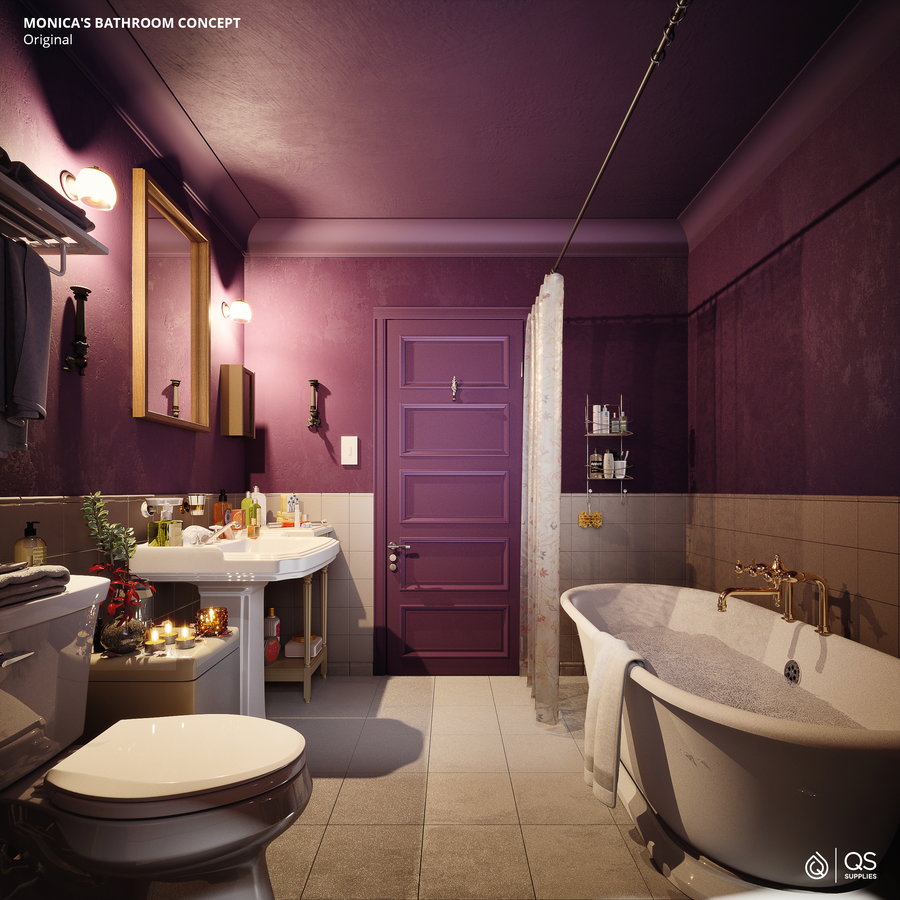 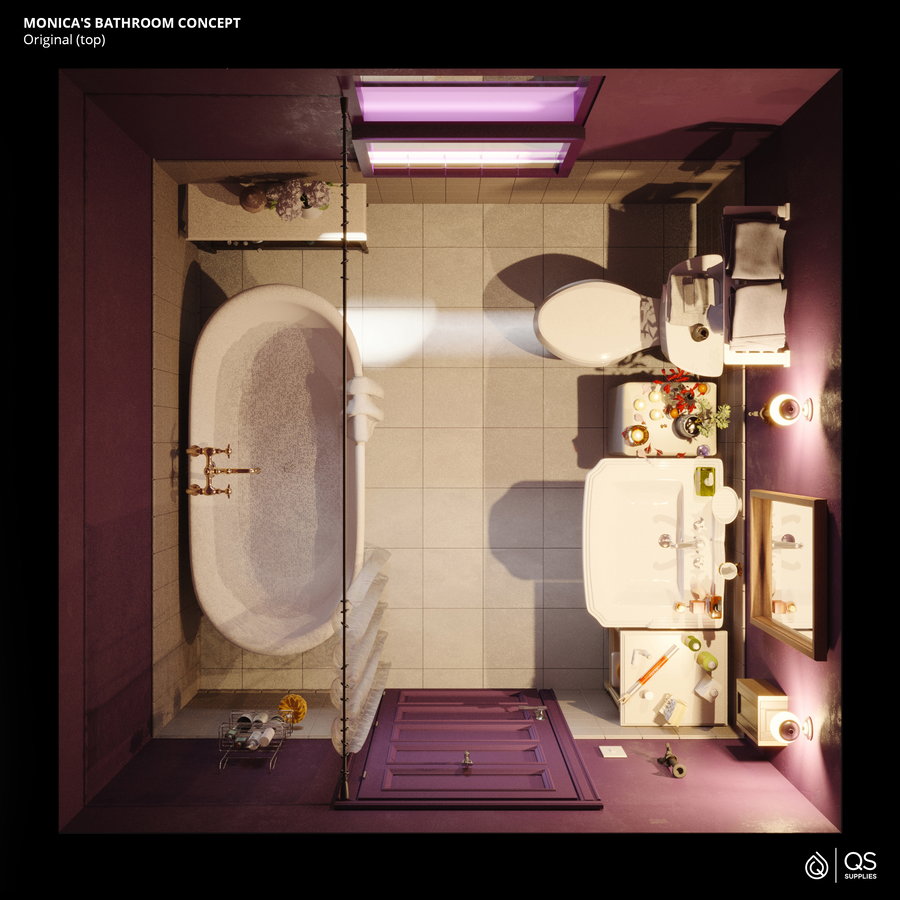 Monica, type A personality and chef, generally kept her eclectically decorated Greenwich Village apartment immaculate and ready to host a gathering at a moment’s notice. But, as revealed in “The One with Frank Jr.,” there’s one room that Monica neglected: her bathroom. As Joey Tribbiani points out, “You know, if you move your hamper you can see the color the tile used to be!”

If Monica were a real person, we’d imagine she would have given her bathroom at least a small update by 2021. Now, the folks over at QS Supplies have taken the liberty of giving her bathroom a digital makeover in a range of styles they imagine she might choose, from industrial to Moroccan. 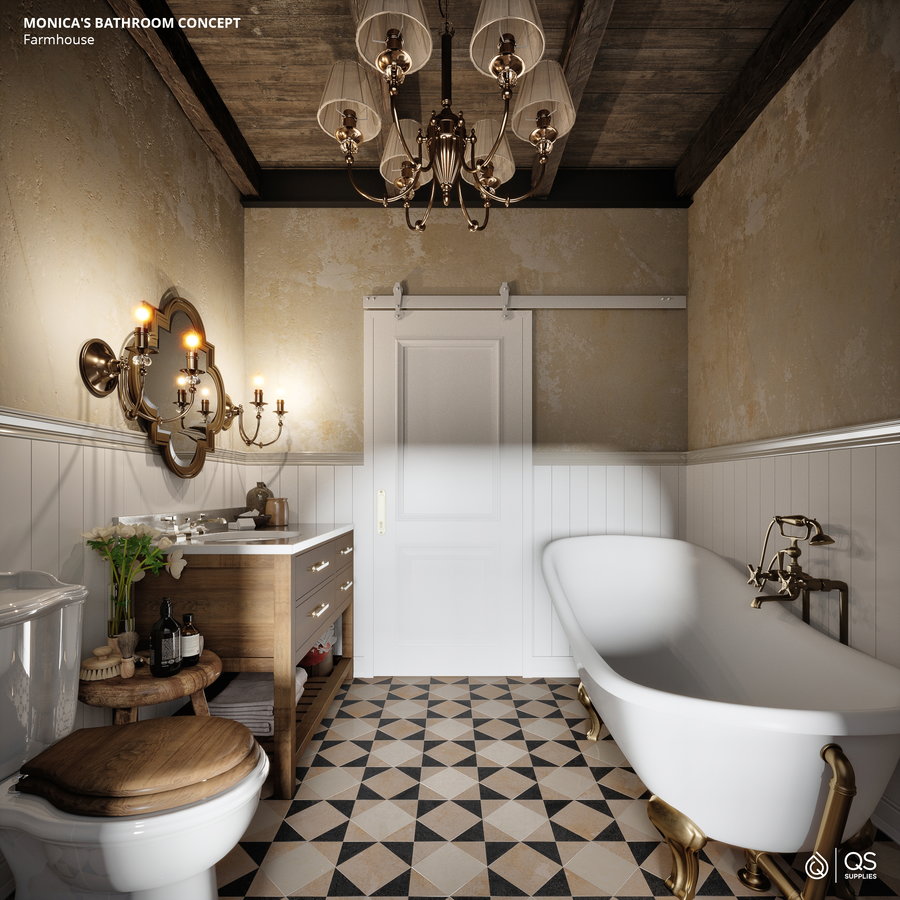 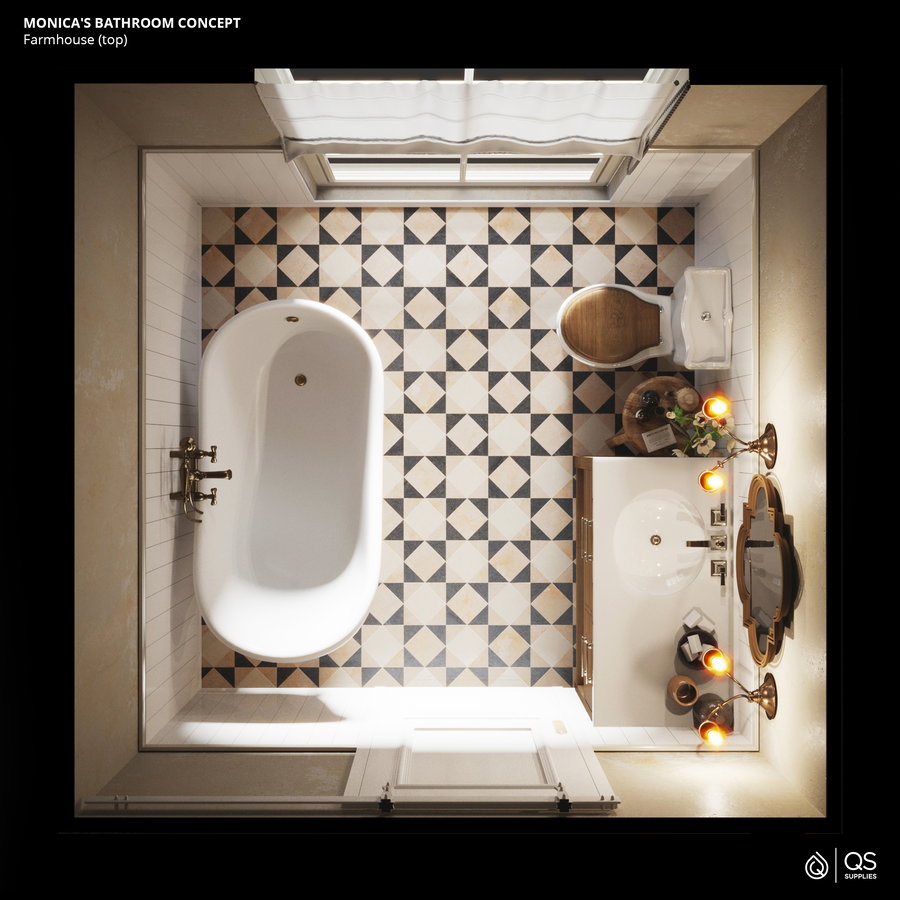 Monica’s real bathroom, like much of the rest of her apartment, was painted a very 90s shade of purple. That loud vibe is pretty much the opposite of contemporary farmhouse style, where predominately black and white palettes are typically accented with beige and gray. Perhaps the most realistic (and likely) makeover on this list, it’s pretty easy to pull off, from the plastered paint and wainscoting to the classic tub filler and checkerboard floor. 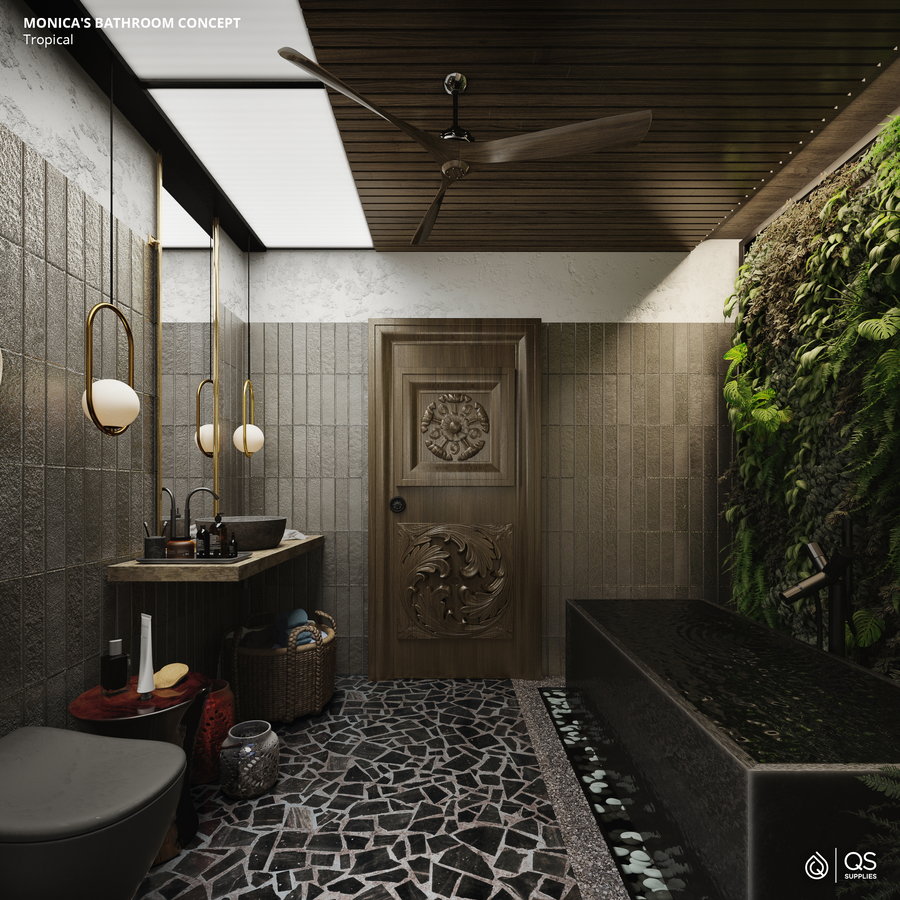 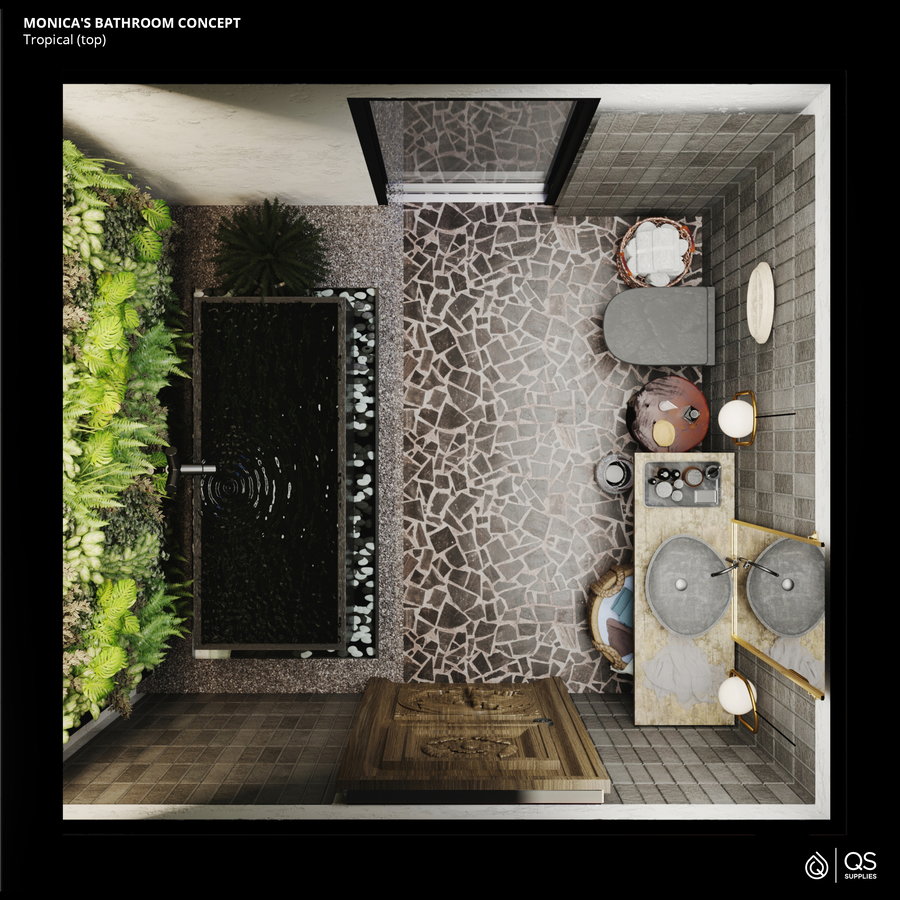 Marrying tropical style with modern sensibilities, this fantasy renovation wows with a lush wall of living vegetation alongside the tub, so you can take a mini-vacation in your very own mini-resort whenever you want. Stone, elaborately carved reliefs on the wooden door and a ceiling fan bring the look together. 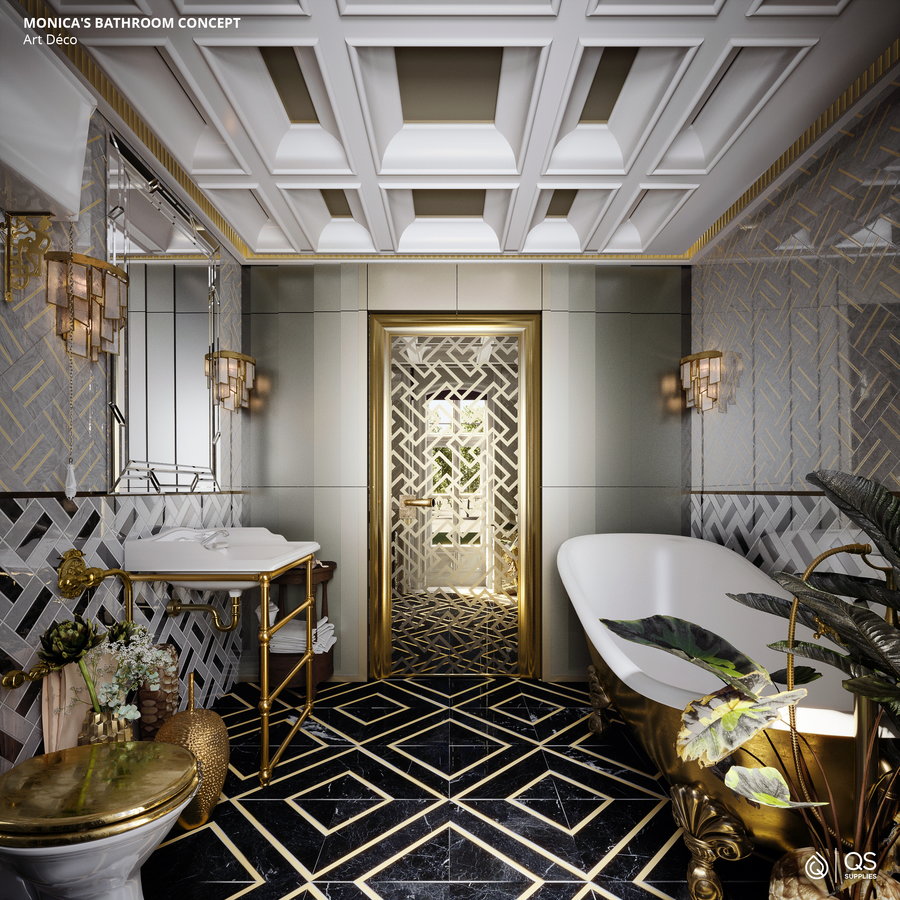 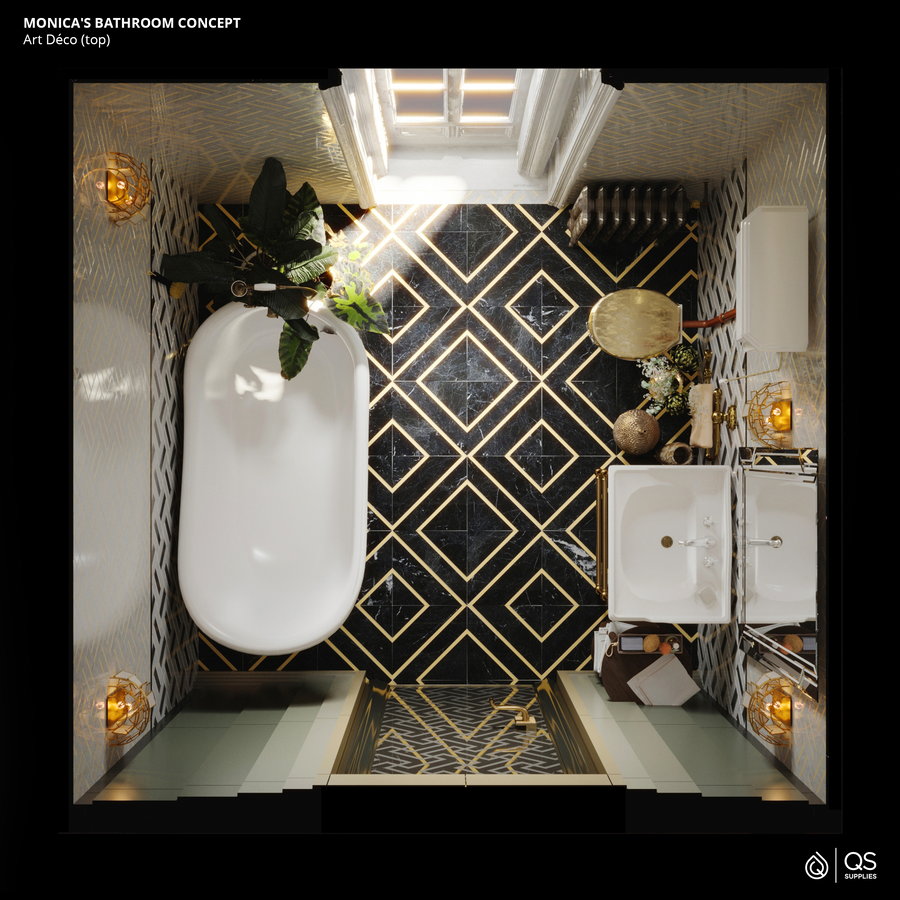 Everything about this Art Deco style bathroom makeover says “sophistication,” from the gorgeous tray ceiling and bold patterned floor to the capiz sconces and gold accents. Of course, if your bathroom looks like this, one would hope that the rest of your apartment is on the same level. 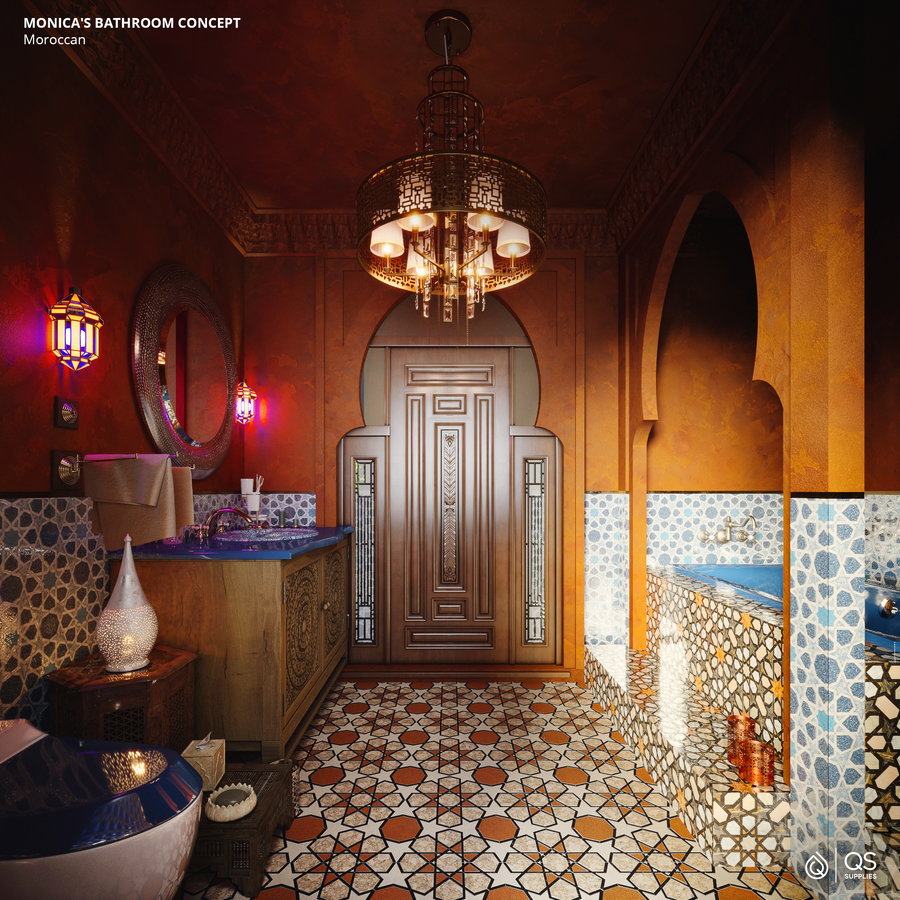 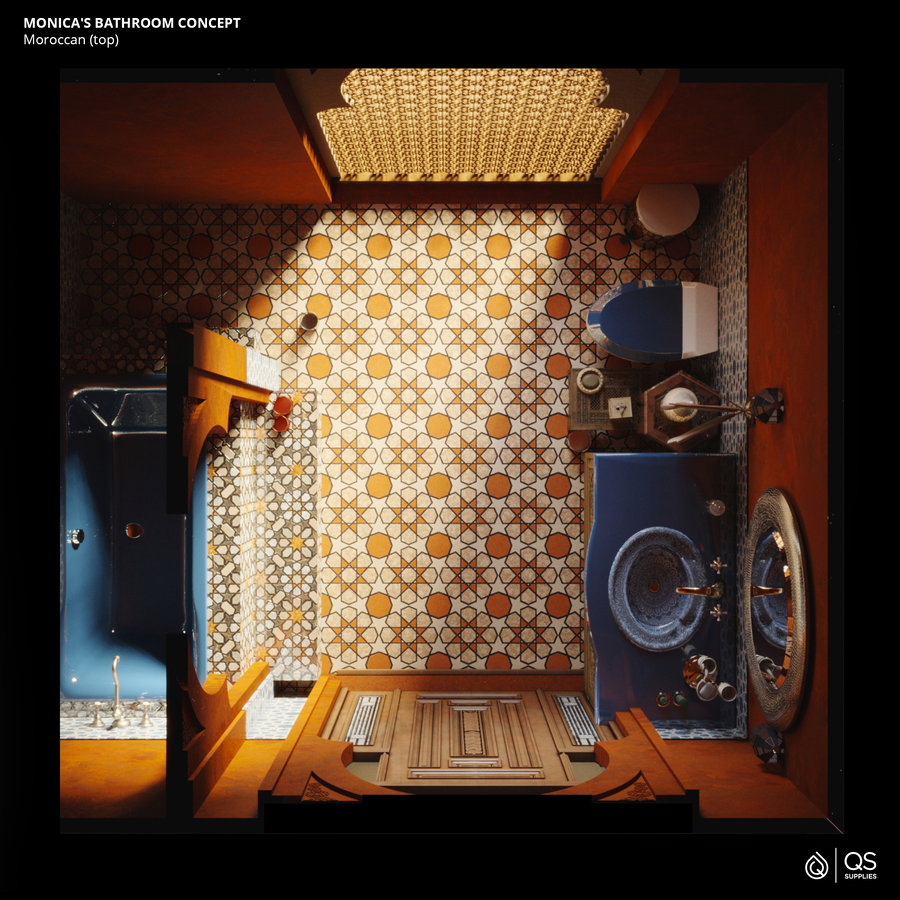 Drama, saturated color, and to-die-for patterns characterize this vibrant conversion, turning Monica’s bathroom from blah to unforgettable. Naturally water-resistant stone flags and mosaic tiling are a great choice for both function and looks. Using a piece of wooden furniture in place of a standard vanity is one designer’s trick more of us should keep in mind for our own renovations, and the arch shapes of the door and bath entry take this look over the top. 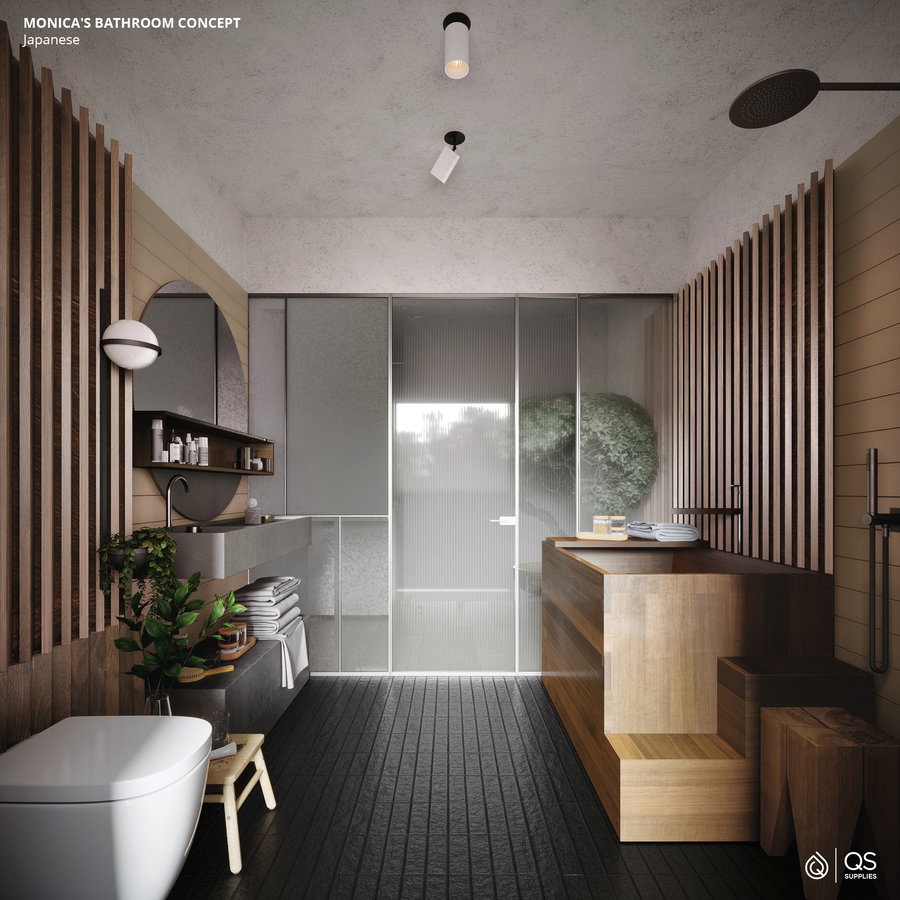 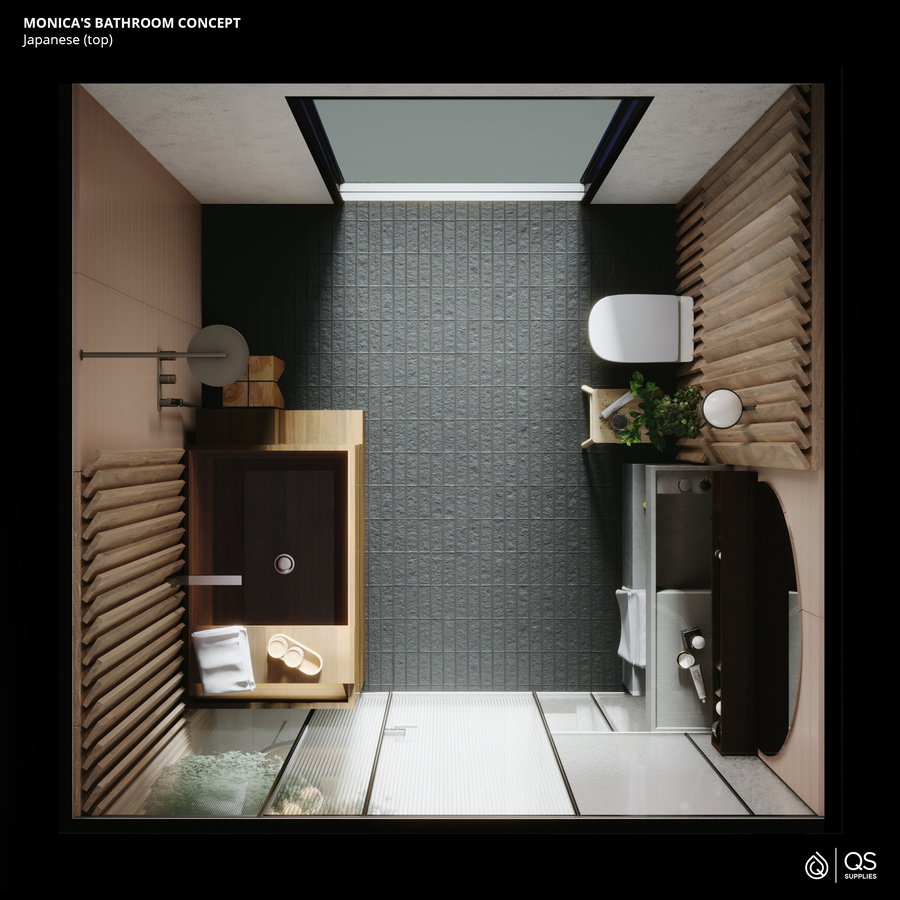 For a personality type that could use a little zen, a Japanese-style bathroom might be a good idea. This redesign feels spacious, open, and relaxing, with an absolutely epic wooden bathtub. Timber slats on the walls bring in some warmth, and who wouldn’t love a gorgeous bonsai growing in their shower?

“Are you familiar with the Japanese concept of unagi?” writes QS Supplies. “According to Ross Geller, it’s a Japanese concept meaning ‘state of total awareness.’ According to the Japanese, unagi means ‘freshwater eel.’ It’s a good lesson in Japanese design style: if you want it for your bathroom, make sure you understand the principles, not just the surface appearance!” 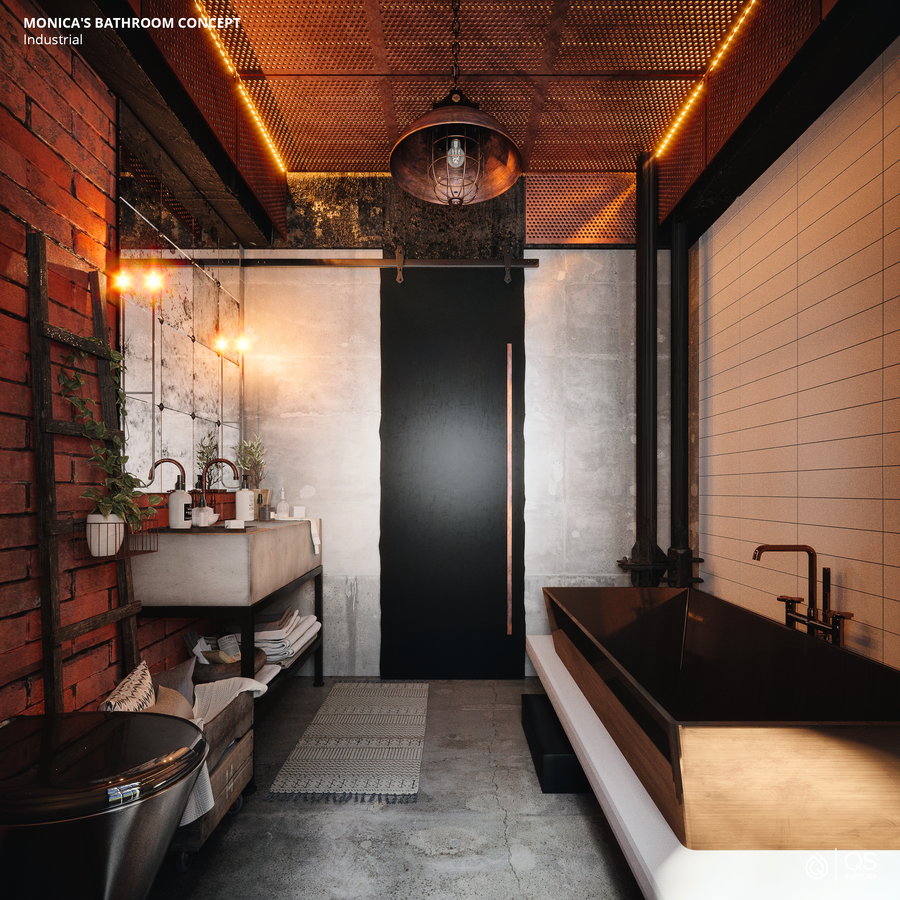 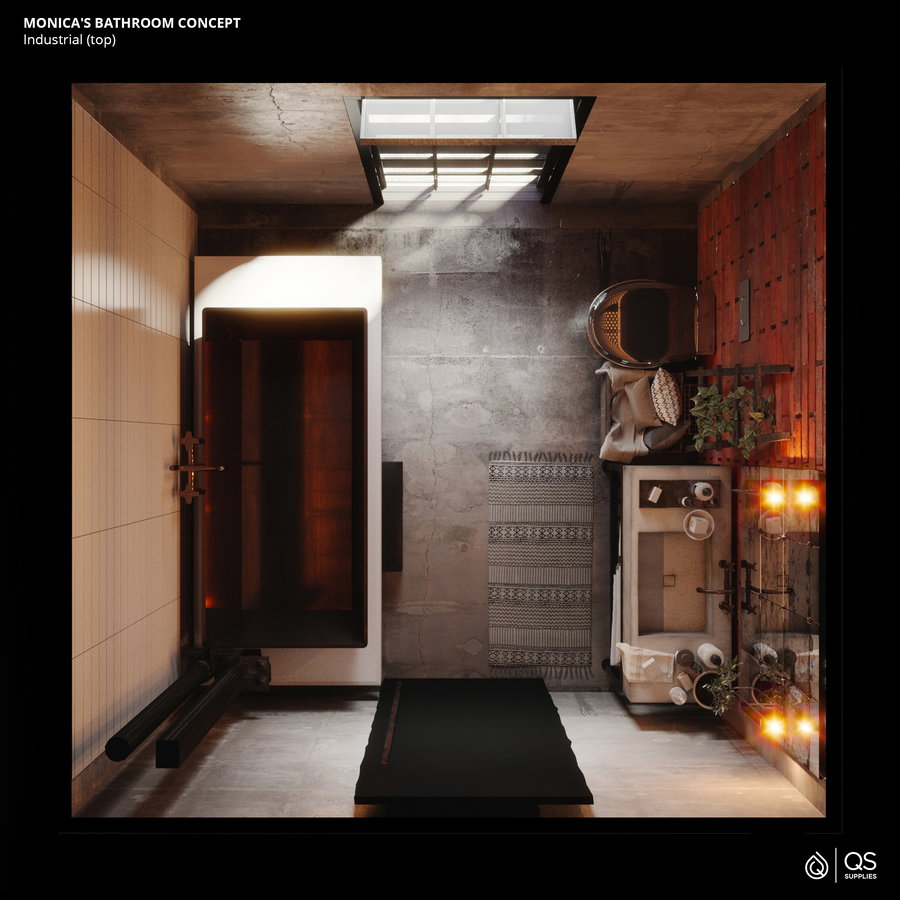 Perhaps the style that most announces “I’m a successful chef in New York City,” this look reimagines Monica’s apartment as a warehouse conversion with raw concrete walls and flooring, a decorative metal grille ceiling, a sliding door, lots of hard angular shapes, and what looks like a slightly smaller, less comfortable tub than her original clawfoot.