For decades, Houston residents have wondered about the mysterious “Darth Vader House,” their nickname for a sprawling luxury residence in the city’s bustling West University Place subdivision. Built in 1992, the 7,040-square-foot home looks a lot like the infamous Sith Lord’s helmet from the outside. But few people ever got to see what it looked like inside – until now. The property has been listed for sale with agents Nadia Carron and Wade Knight of Martha Turner Sotheby’s International Realty for $4.3 million, and interior photos have finally been revealed. 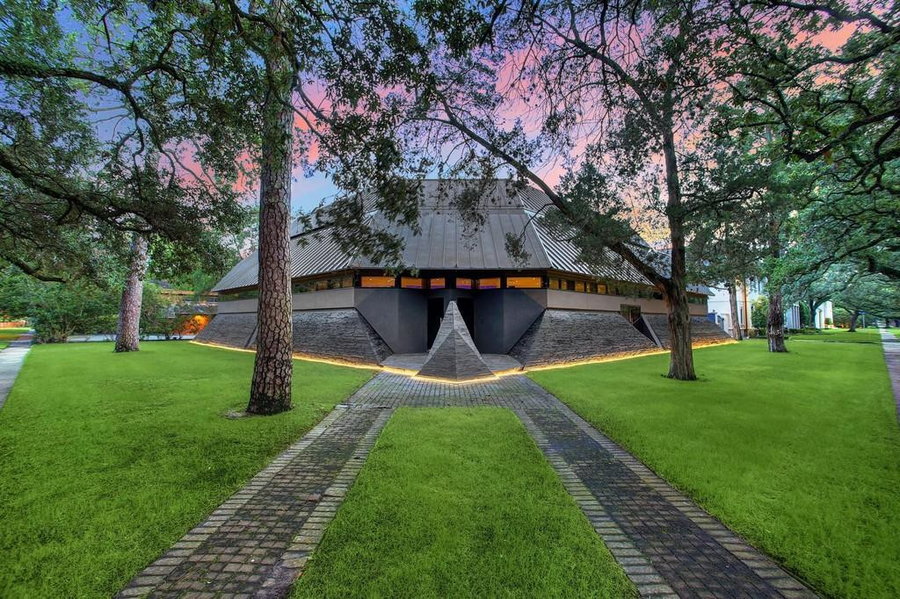 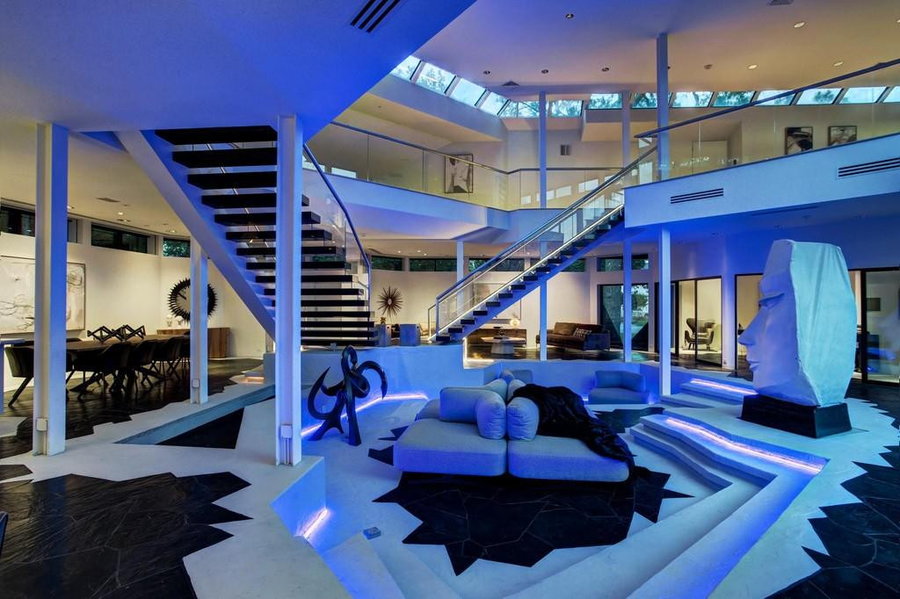 The home sprang from the imagination of its owner, plastic surgeon Dr. Jean Cukier, who has long had a fascination with science fiction. He drew the concept on paper and gave it to architect Lynn Swisher Spears to bring to life. The neighbors reportedly weren’t in love with the design at first, nor its tendency to draw curious onlookers from around the world. But Star Wars fans are obsessed, and as it turns out, there are a few vaguely sci-fi features inside the house, too, though most of it just looks like your average Texas mansion. 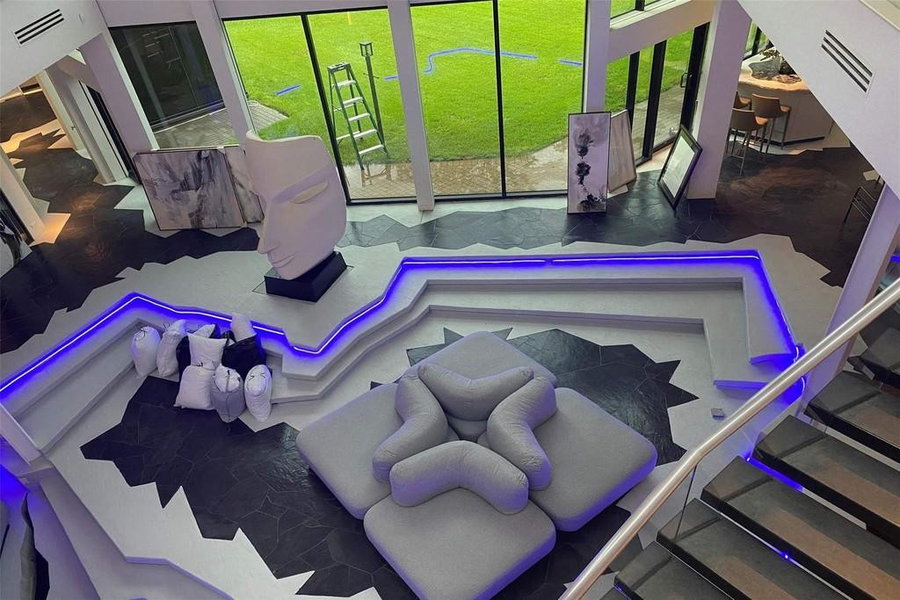 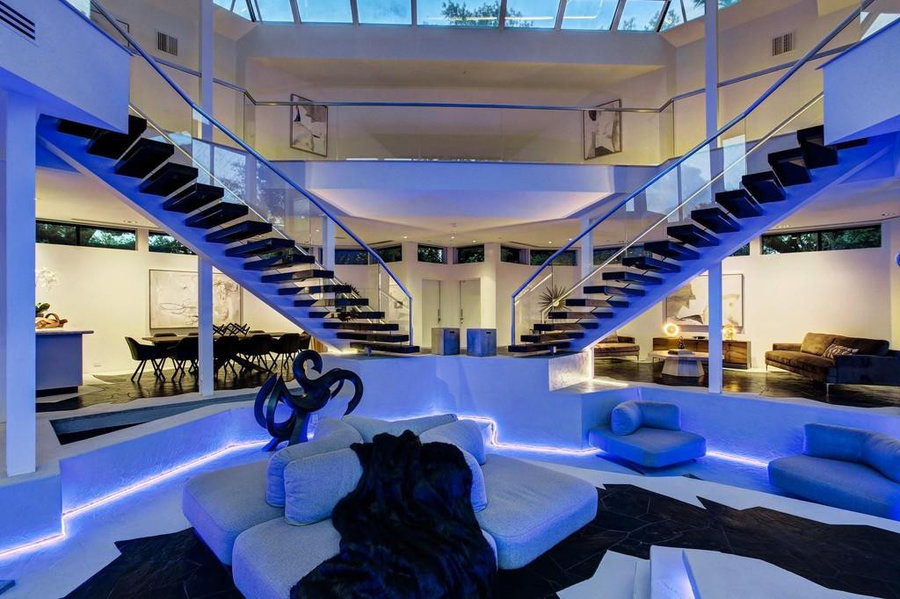 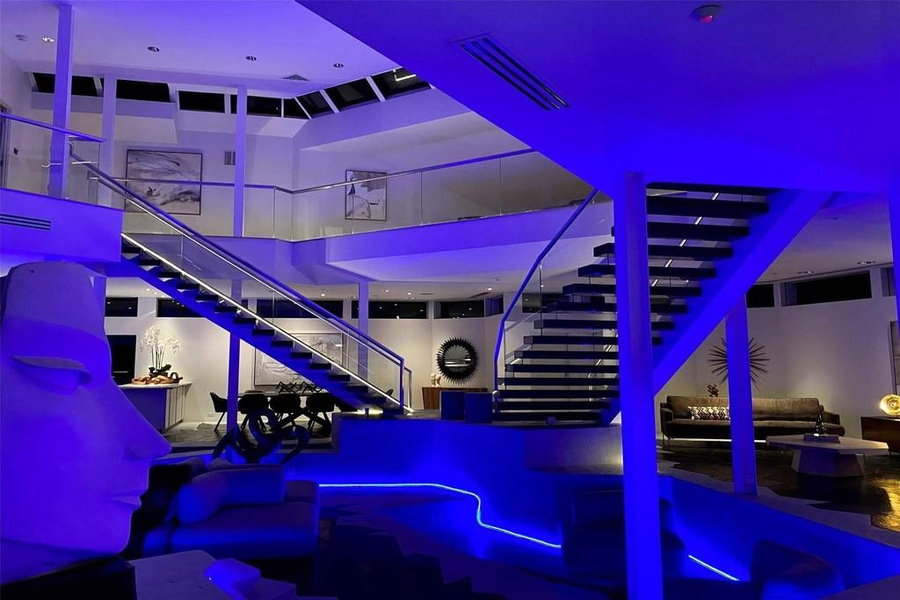 At the center of the home is an angular atrium fit for a supervillain. There’s a grand staircase near the front door, soaring ceilings, and floors made of concrete and stone that were hand-cut and painted in black and white for a jagged effect. A huge sunken conversation pit is perhaps the home’s most divisive feature, set adjacent to the living room and kitchen and at the base of two floating staircases. It’s lined with rope lights that glow neon blue after dark and has an oddly antisocial sofa at the center, with four seats facing in different directions. 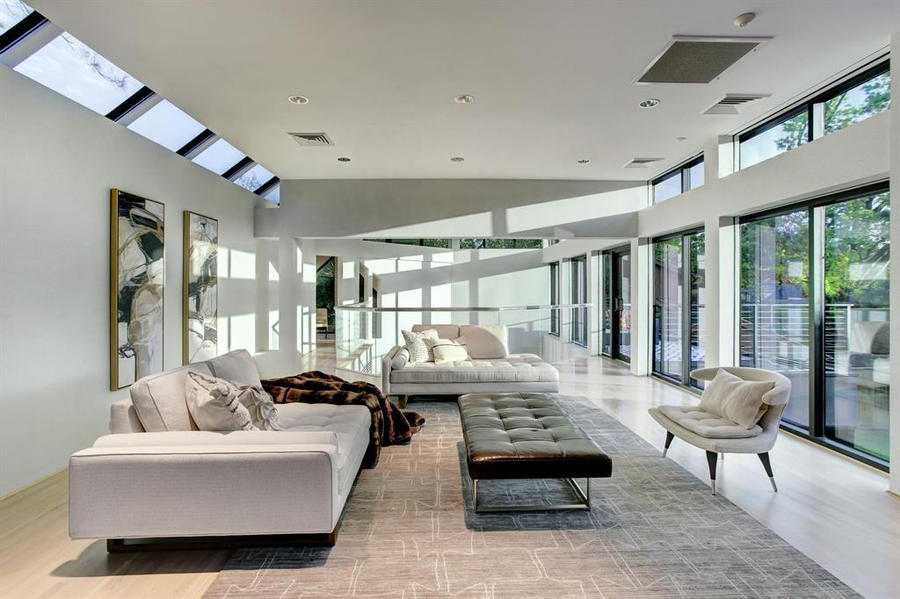 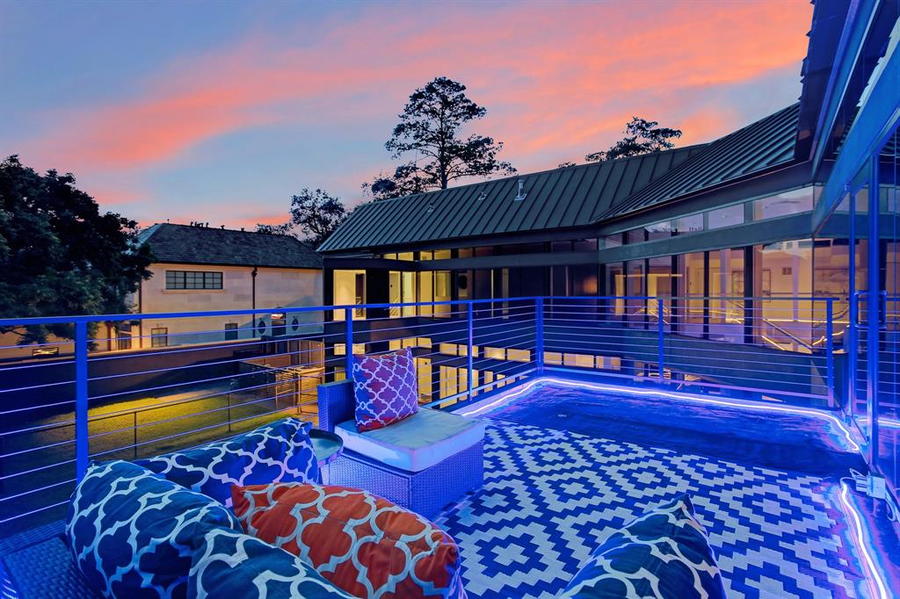 For its massive size, you might be surprised to learn that the Darth Vader house only has 4 bedrooms and 5 bathrooms, but each room is generously sized, especially the master suite. Other love-it-or-hate-it features include jagged stone countertops, oversized sculptures, and a totally open master bathroom tucked behind a partial wall.

Texas Monthly’s Paula Mejía got to tour the inside in person, reporting that it felt like “being on the set of a retro space-age B movie, à la Barbarella.” Of the atrium, she says, “This space strikes me as one that’s pitch-perfect for plotting. It’s a lair from which you might wheel and deal, perhaps scheming to take over the world. Cukier didn’t use it as an office at all when he lived here, though. It housed his music studio, which included a Moog synthesizer, organ, and piano.” 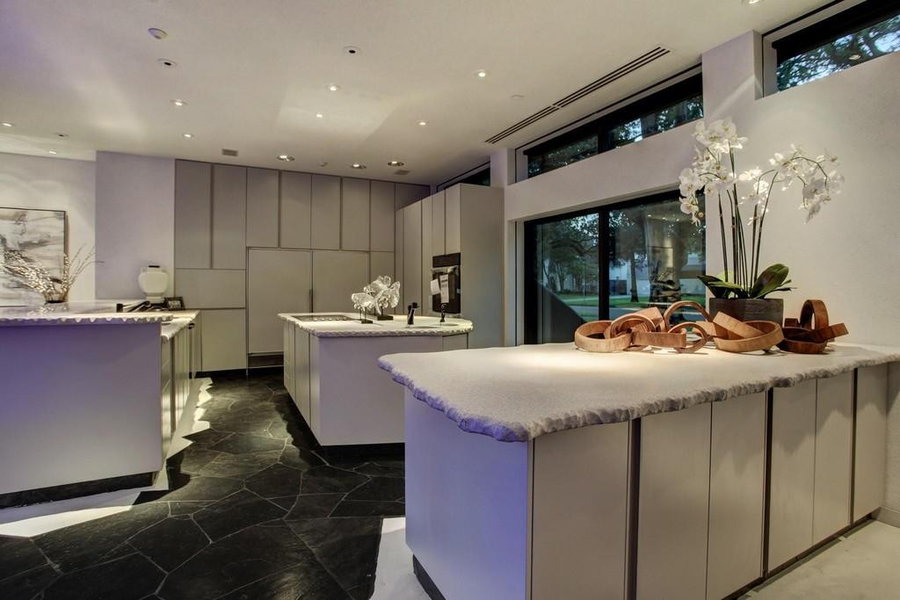 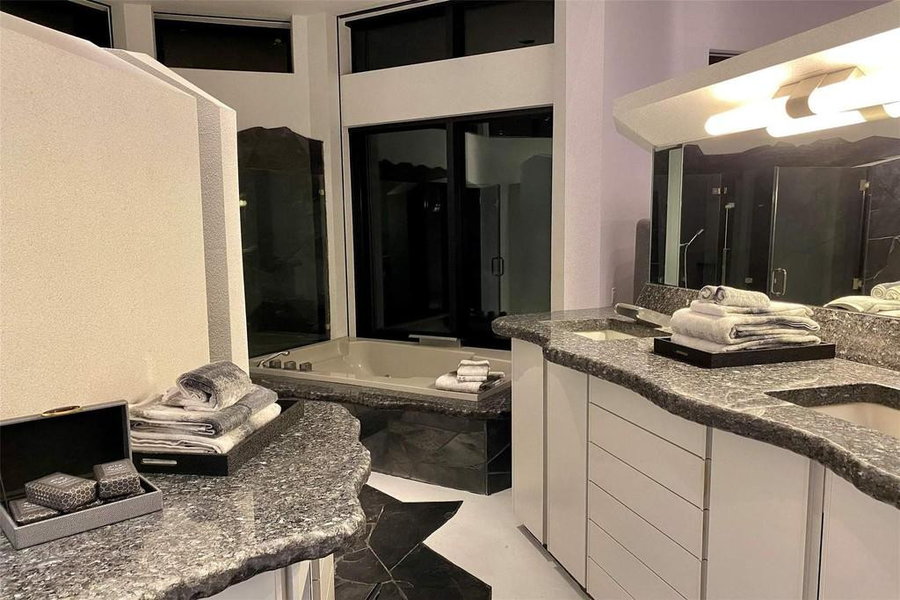 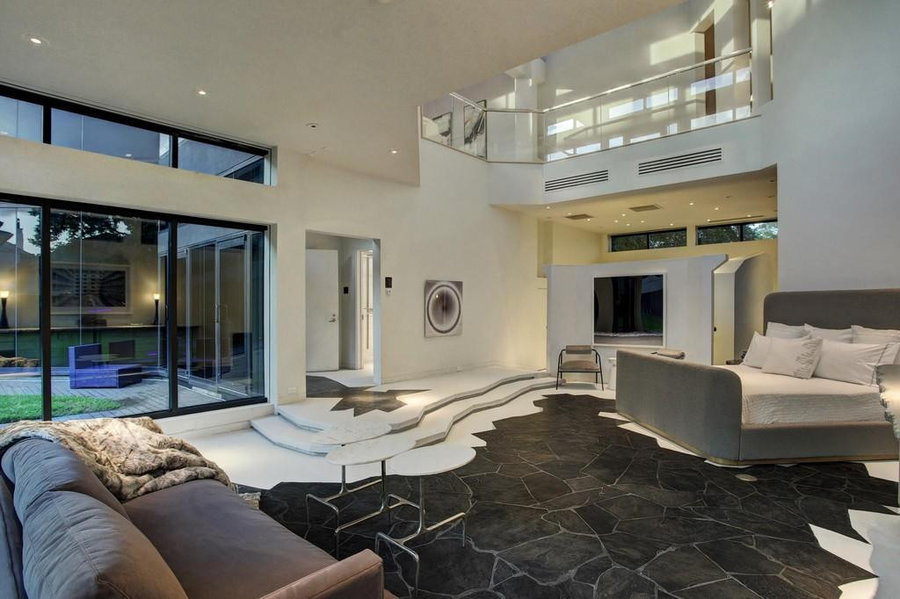 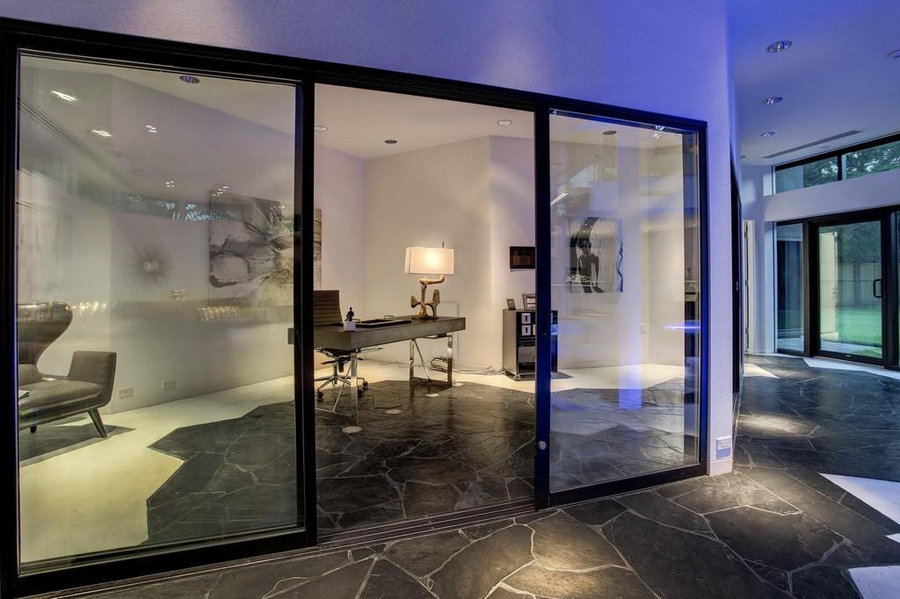 Believe it or not, when Dr. Cukier drew out his concept, he wasn’t imagining Darth Vader. His inspiration was aviation. He did, however, ask for it to be “dark and mysterious,” says listing agent Carron. “He wanted the inspiration around the house to be the stealth fighter, the aircraft. He just thinks out of the box, and he didn’t want something that you would see in every home. You get the dark and mysterious on the front side of the house, and then you get the wide-open and oversized second-story windows [on the back]. We were pleasantly surprised, because from the exterior, you would think it would be dark, but it’s the complete opposite.” 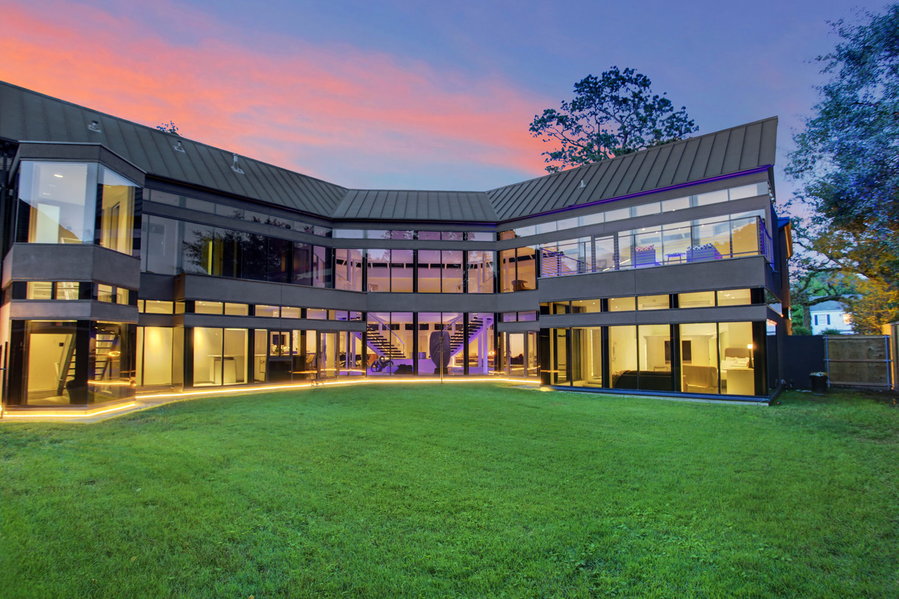 “There’s nothing else like it in the area,” the realtors write in the listing. No kidding. And who might actually purchase such an extraordinary (and expensive) home? According to rumors, rapper 50 Cent recently moved to the area, and he’s interested.