If you were disappointed back in January when the latest James Bond movie was postponed yet again, you’re in luck. Artist Leonie Wharton is offering up a little something to tide you over until the new October 2021 release date.

Commissioned home improvement connection site HomeAdvisor, Wharton created a poster series immortalizing the most famous Bond movie architecture. Graphically designed in simple, high-contrast lines, she chose at least one location to highlight from each of the previous 25 films. With one poster featuring all 48 places and individual posters of each, these dramatic red, black, and gray illustrations also include a short description of the events that took place there in each movie.

Here are some of our favorites For Your Eyes Only, even if it does feel like Tomorrow Never Dies until the new No Time to Die film comes out: 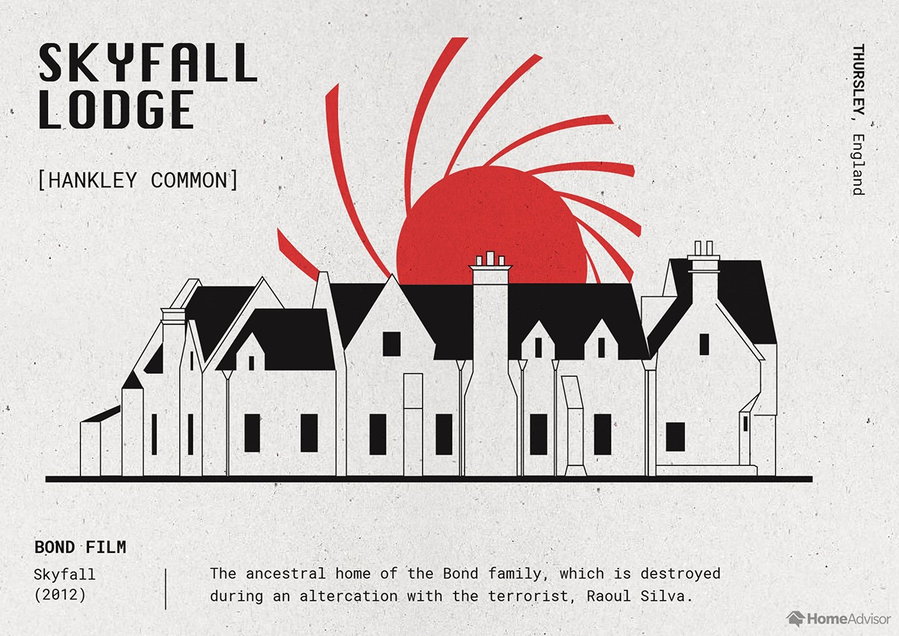 The Bond family home, featured in the 2012 film Skyfall, was a stately mansion located in the Scottish Highlands. Designed by art director Dean Clegg, the gorgeous estate (that was later blown up on screen by terrorist villain Raoul Silva) was based on traditional Scottish stone homes with their small, mullioned windows and mossy walls. 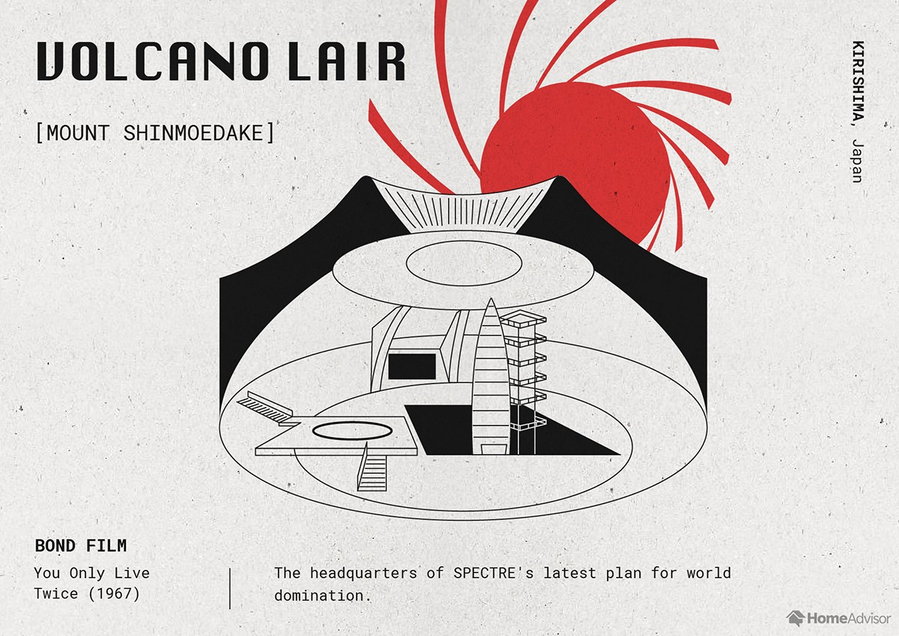 Perhaps one of the coolest evil lairs of all time, Wharton created a succinct outline of the hollowed-out volcano from 1967’s You Only Live Twice. While exterior shots of this location were filmed at Mount Shinmoe-dake on Japan’s southern island, the interiors were manufactured on the British Pinewood Studios lot. 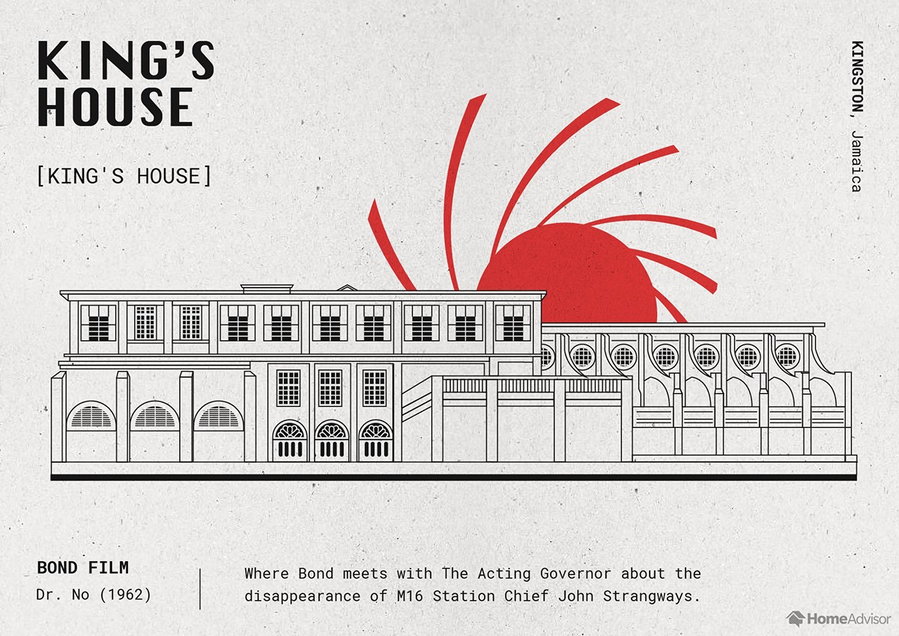 Jamaica was the tropical paradise depicted in the very first Bond motion picture, Dr. No (1962). For this poster, Wharton captures the majestic building where the spy meets with the island’s acting governor. 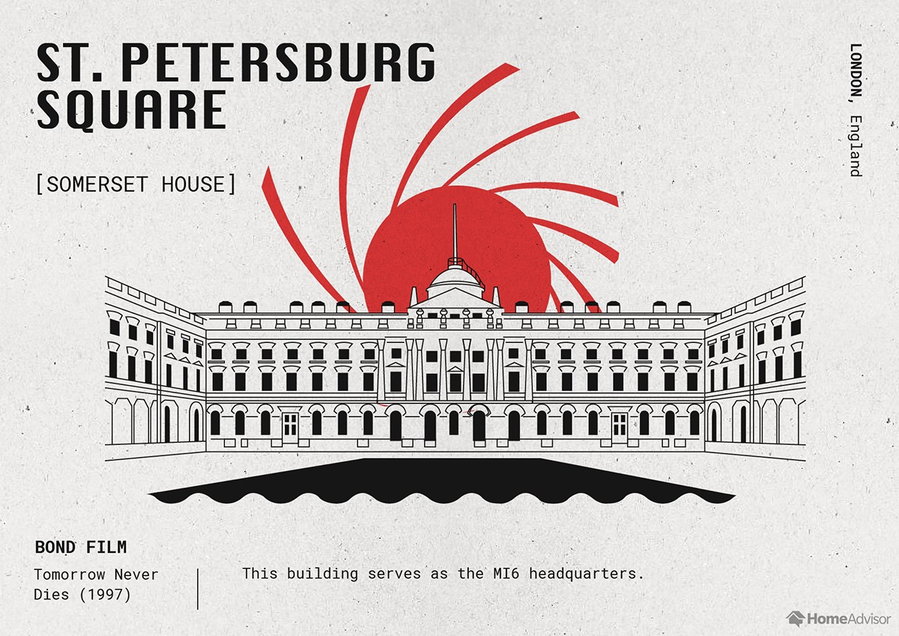 This building has actually played double roles in Bond films: first as itself in 1995’s GoldenEye, and then as the MI6 headquarters in 1997’s Tomorrow Never Dies. In England today, its real purpose is as an arts center. 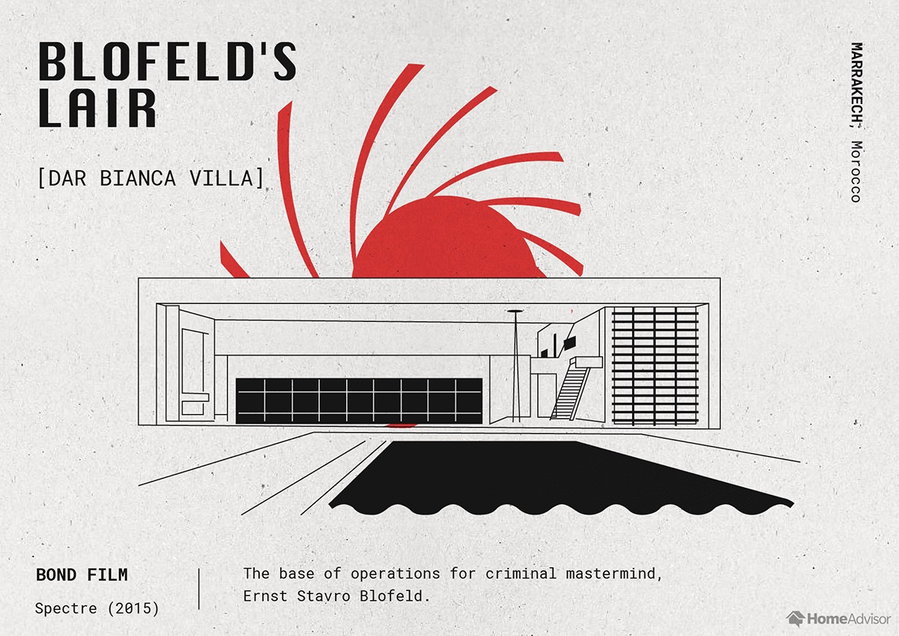 The minimalist home of villain Ernst Blofeld in 2015’s Spectre is actually known as the villa Dar Bianca in real life, located in a surprisingly lush park-like setting in Morocco. Film producers used CGI to place it in the inhospitable desert mountains we see in the movie. 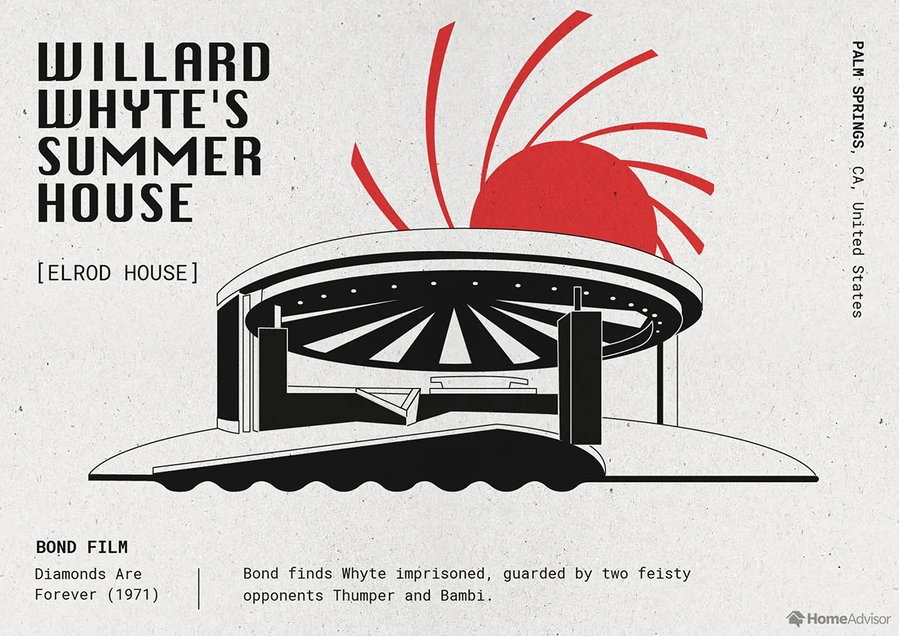 This is the bold, modernist home where Bond is detained by Blofeld’s comrades in Diamonds Are Forever (1971). Called the Elrod House in our reality, its striking design was drafted in 1968 by architect John Lautner. 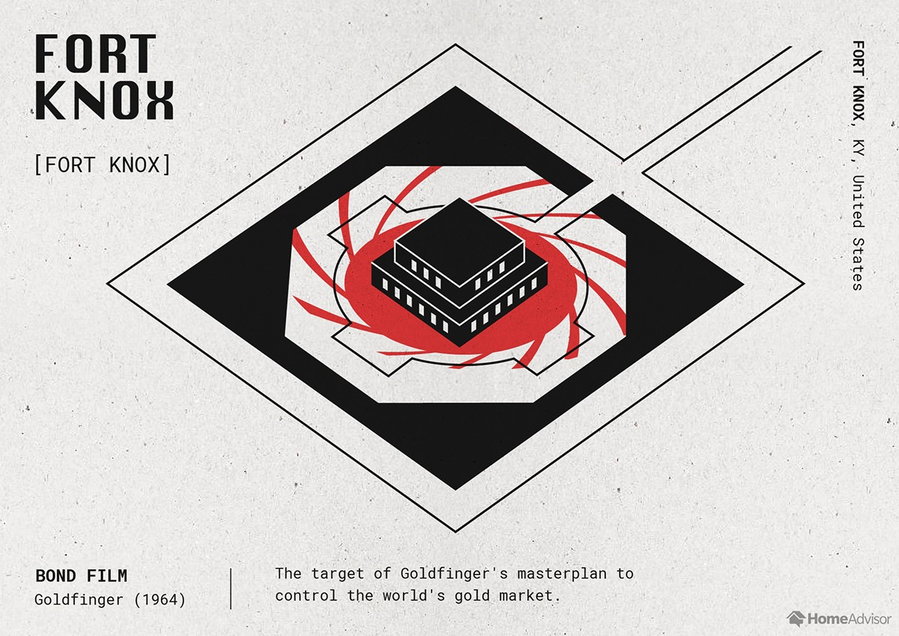 The Kentucky safehold for U.S. gold was the target of the Bond villain in 1964’s Goldfinger. Best of all, this cool graphic has the fortress sitting atop the radiating red sun. 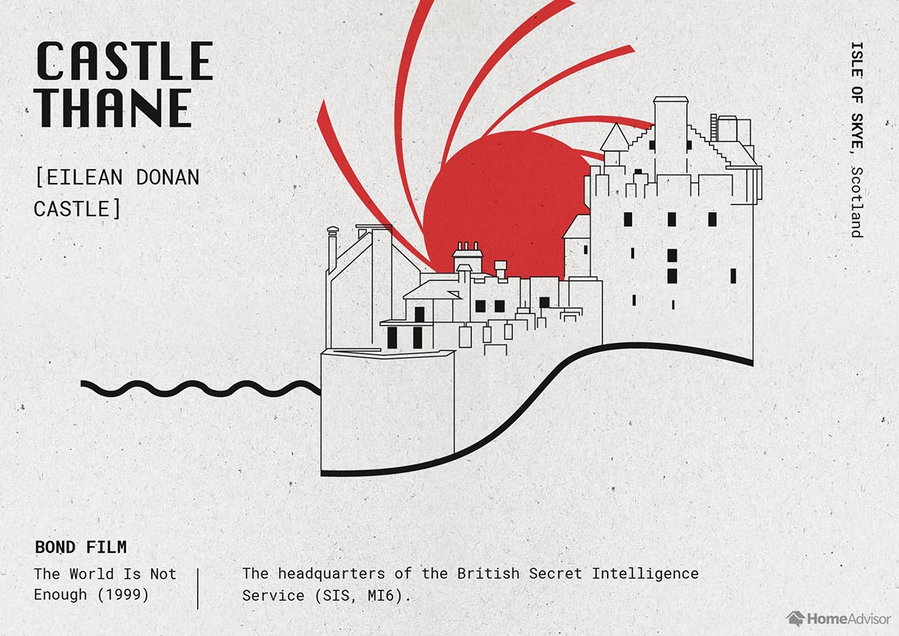 Last but not least is another temporary HQ for the British Secret Intelligence Service: Castle Thane. Modeled after Eilean Donan, a 13th-century estate in the western Scottish Highlands situated at the confluence of three gorgeous sea lochs, Castle Thane was a beautiful backdrop for Bond and M to rendezvous in 1999’s The World is Not Enough.