In hot climates, the unrelenting sun beats straight down onto building facades, making it a lot harder for them to keep their interiors cool. Shades of various kinds can help, of course, but there’s a different way of dealing with heat that comes with additional benefits. A new home in Vietnam by VTN Architects features a second facade set about eight feet from its actual exterior walls, creating a cool, shady breezeway in between that supports an abundance of trees and other plants. 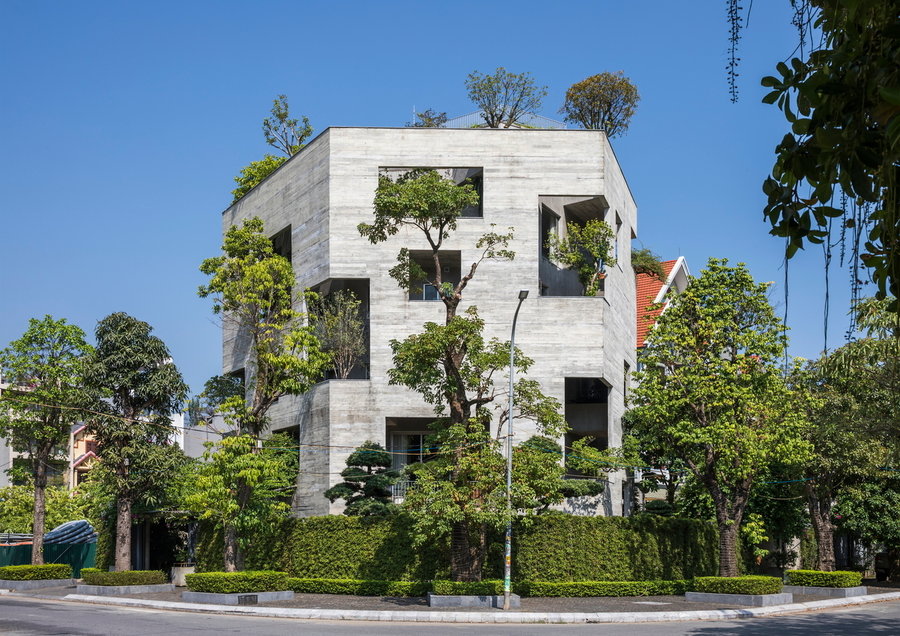 “Ha Long Villa” is remarkable at first glance not just for its irregular geometric facade, but also for the trees poking out of large apertures on every side, all the way up to the roof. Along with providing a little extra shade, the trees give the home a garden-like atmosphere that helps connect its inhabitants to nature within the rapidly industrializing coastal city of Ha Long.

The architects’ two principle motivations may seem to be at odds: the increasing loss of forests and other undeveloped spaces in the area, and the need to create high-quality sustainable housing that meets Ha Long’s rising standard of living. The result is an airy modern home with almost as much exterior living space as interior, though realistically, it’s a bit oversized as a single-family home to truly be considered sustainable. 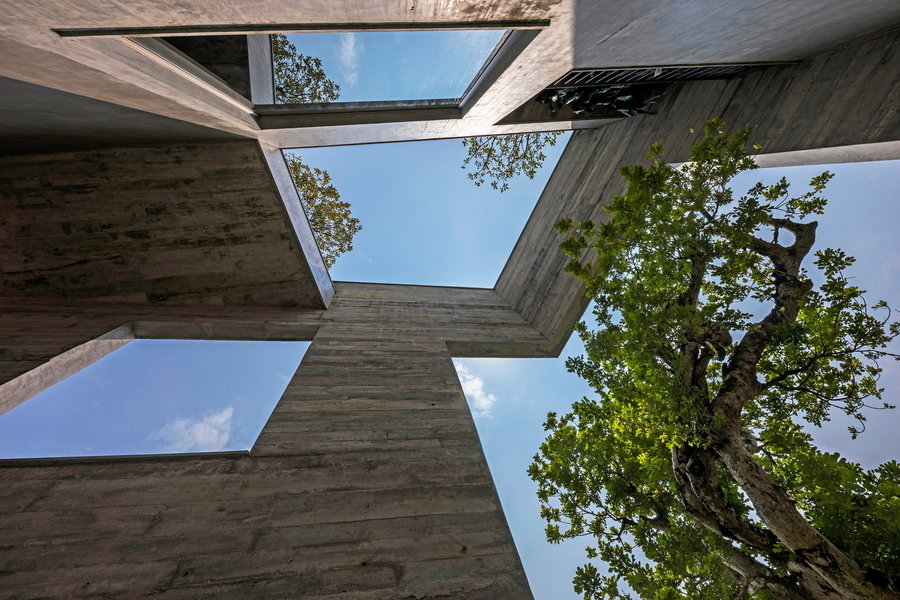 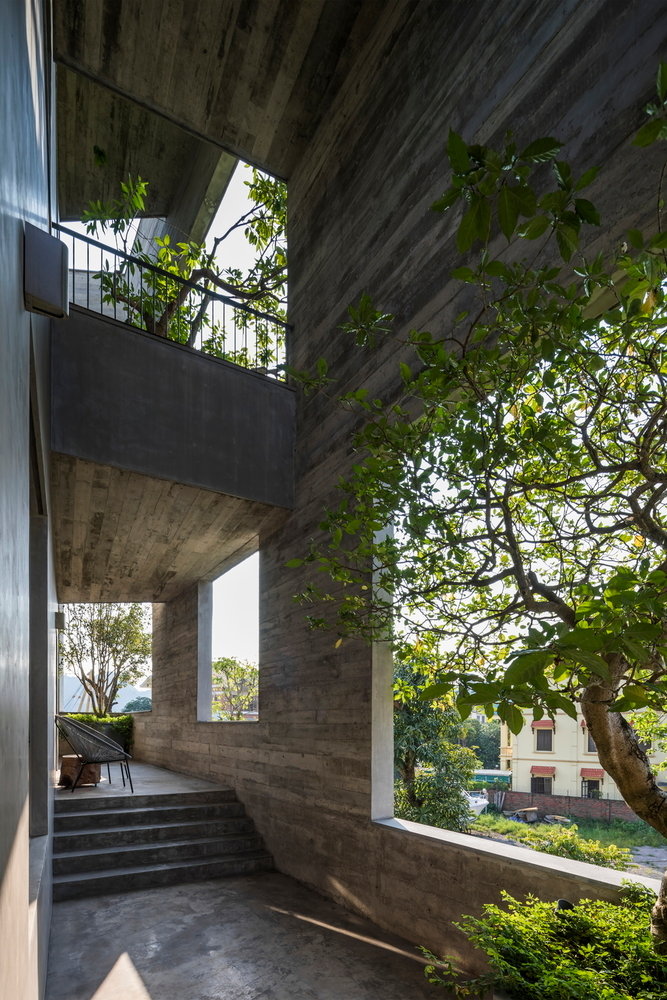 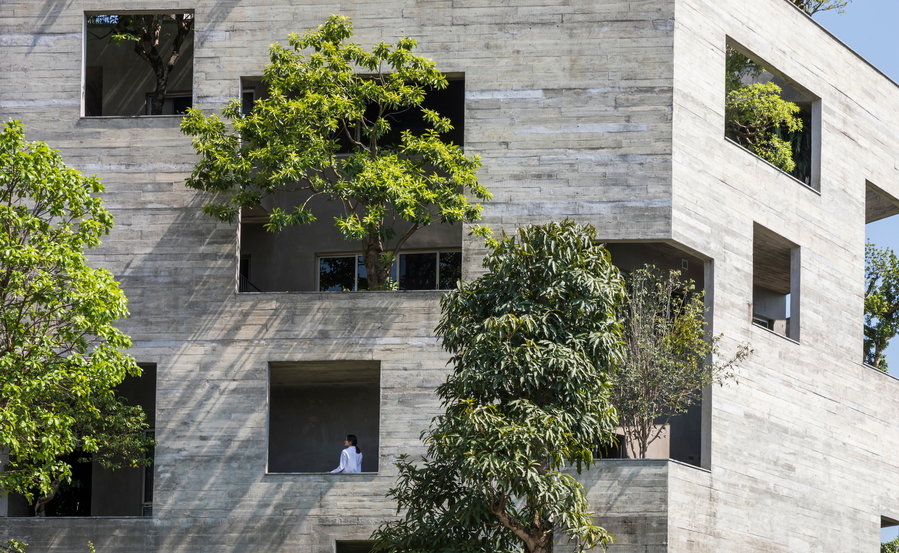 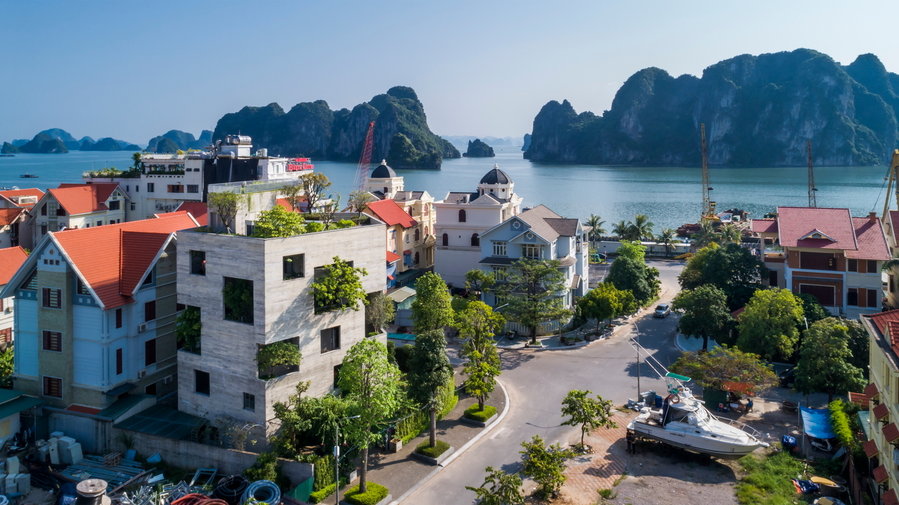 “The semi-exterior space connects the interior and the terrace part of the garden, and is a place to promote various living activities,” the firm explains. “It is a multipurpose space which serves as a connection between each space. It is a place for gardening, sightseeing, sitting, [and] walking, and it also connects to the living space. These distinctive spaces offer residents options in their daily lives, like whether to dine inside or outside on a particular day. The various movements in the resident’s lives are also conveyed to the neighborhood through [the] windows in the exterior facade.”

Between the wrap-around terraces and all the plants on the rooftop, the architects have planted more greenery than construction of the home displaced, though of course, public green spaces have a lot more value to the community at large. VTN Architects took inspiration from stones found in the nearby UNESCO World Heritage Site Ha Long Bay for the rough exposed concrete of the exterior walls, which themselves are dappled in shadow by all the greenery. As the trees change along with the seasons, so does the facade. 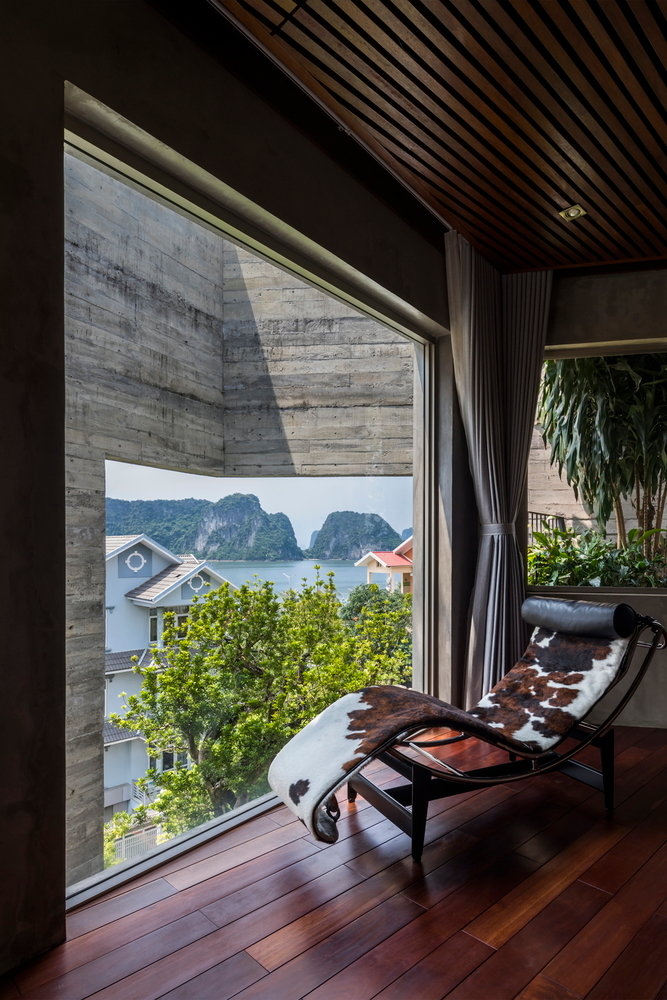 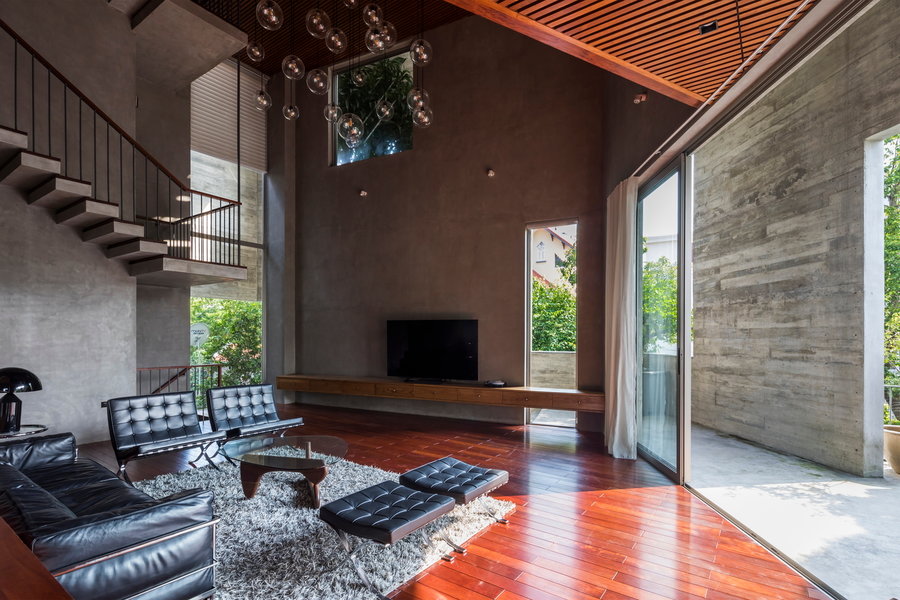 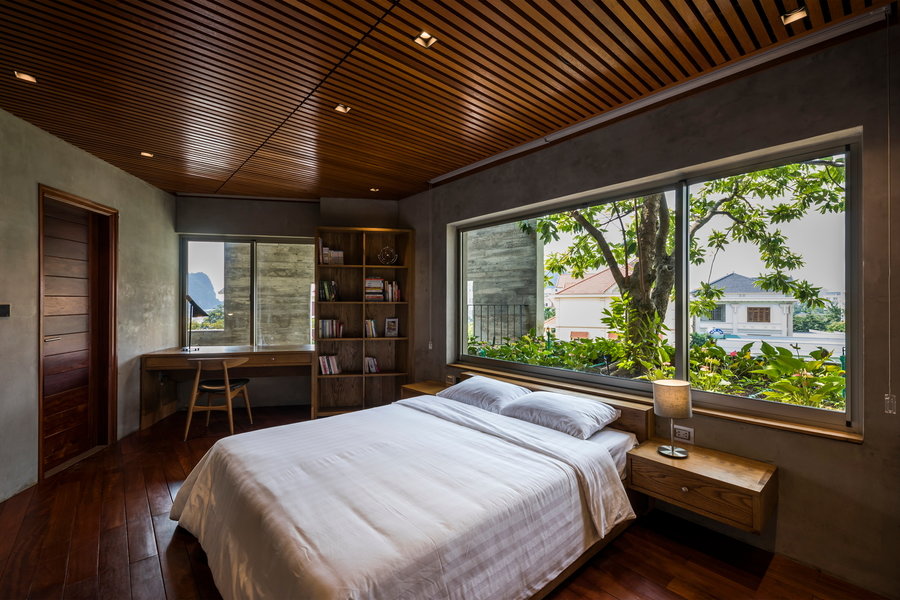 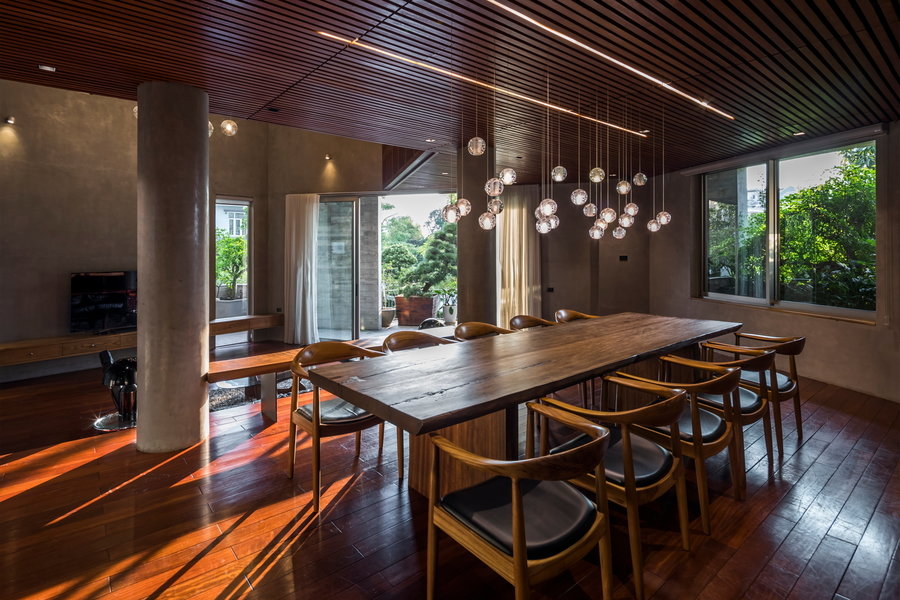 “Ha Long Villa is one of the prototypes of ‘House for Trees,’ which is a series of residential projects,” add the architects. “The aim of the series is to bring green spaces back into the city, and to design as much greenery as was present in the original landscape to provide a healthier life to people living in the city. Due to the simplicity of the concept, the idea of ‘House for Trees’ can be multiplied almost anywhere in tropical climate regions. As part of the vast landscape, Ha Long Villa harmonizes with the natural environment. And Ha Long Villa aims to be a space where people return to living surrounded by nature.” 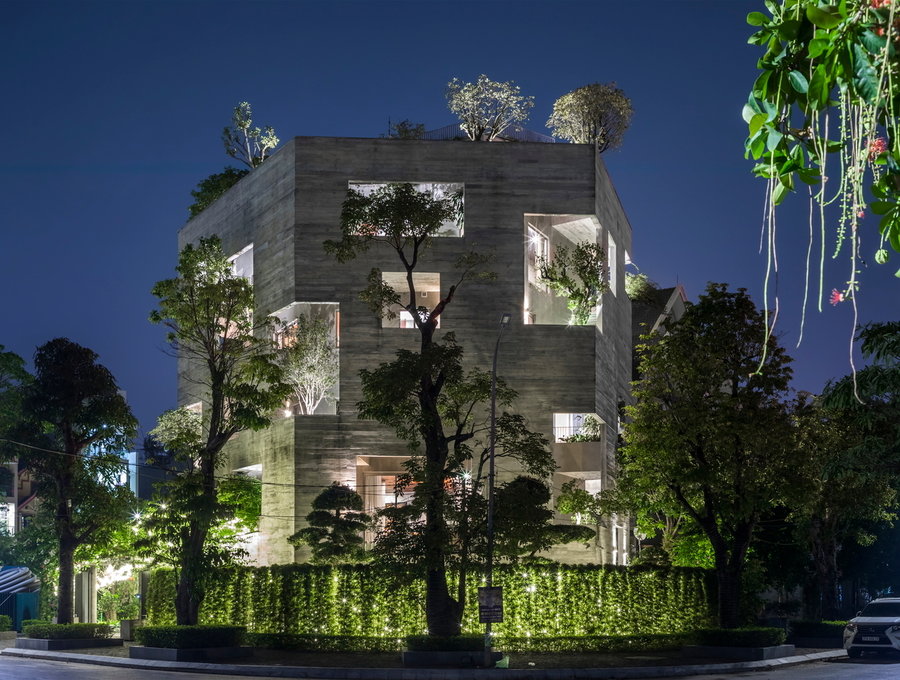 It would be cool to see the passive cooling double-facade concept catch on in other hot places, particularly deserts. Can’t you imagine something like this working in a place like Nevada or Arizona with cacti instead of trees?