Bibliophiles might look upon Guy Laramée’s incredible creations with a mixture of awe and sadness, lamenting the loss of what appear to be perfectly good books. But don’t worry — no particularly relevant tomes have been harmed by the artist’s “Bookwork,” a series of landscapes carved into stacks of old books. 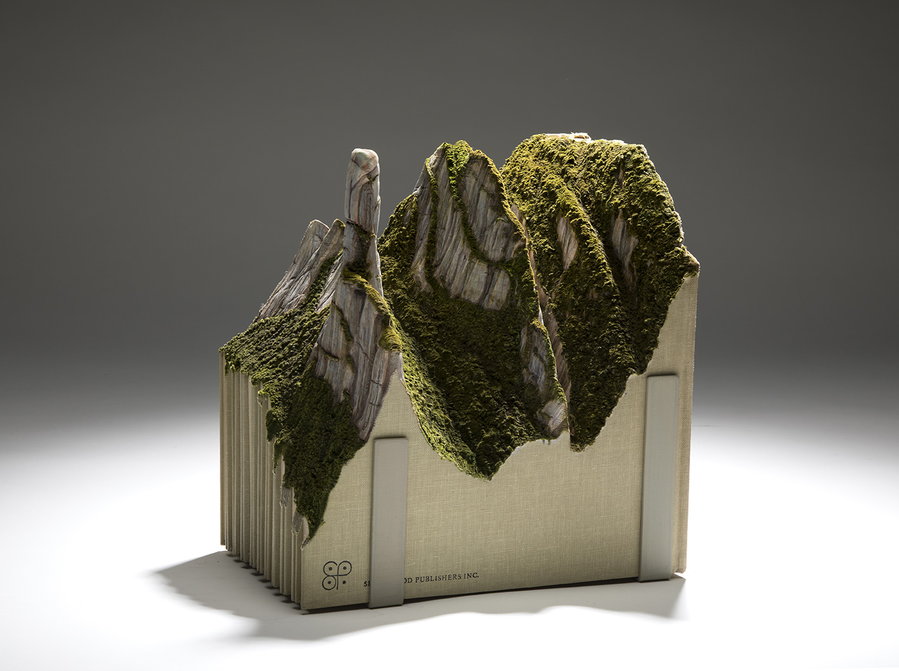 A native of Montreal, Laramée chooses outdated encyclopedias and obsolete dictionaries as his artistic media. Using a unique combination of carving, sandblasting and hand-coloring, he transforms their pages into realistic topographical scenes, some inspired by real places and others the result of pure imagination. He doesn’t necessarily plan them in advance, either, instead waiting for inspiration to strike and working intuitively to “uncover” the landscapes contained within.

Laramée’s concept for the “Bookwork” series is based on the idea of cultural erosion, which manifests itself physically as the layers of rock and sediment we see in each piece. The artist says he’s fascinated by the way cultures emerge, become obsolete, and are replaced by new ones, with entire histories displaced and destroyed. Noting that we’re constantly told that paper books and libraries will soon suffer the same fate, he questions whether new technologies will really change humanity for the better. 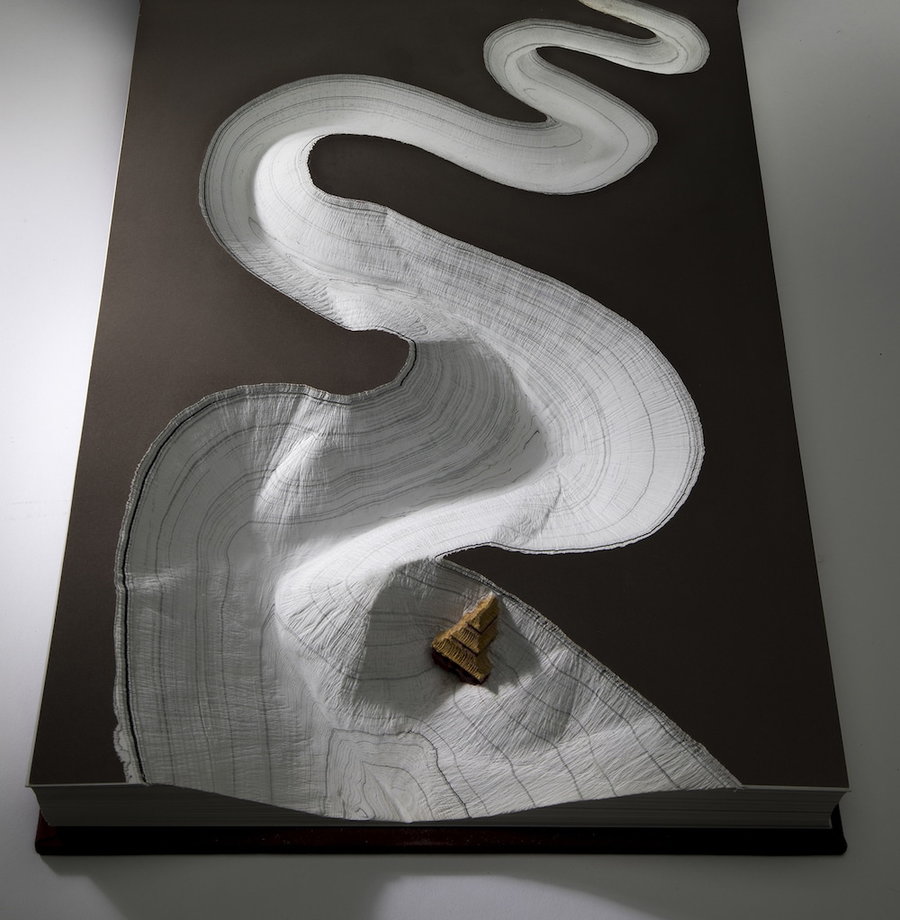 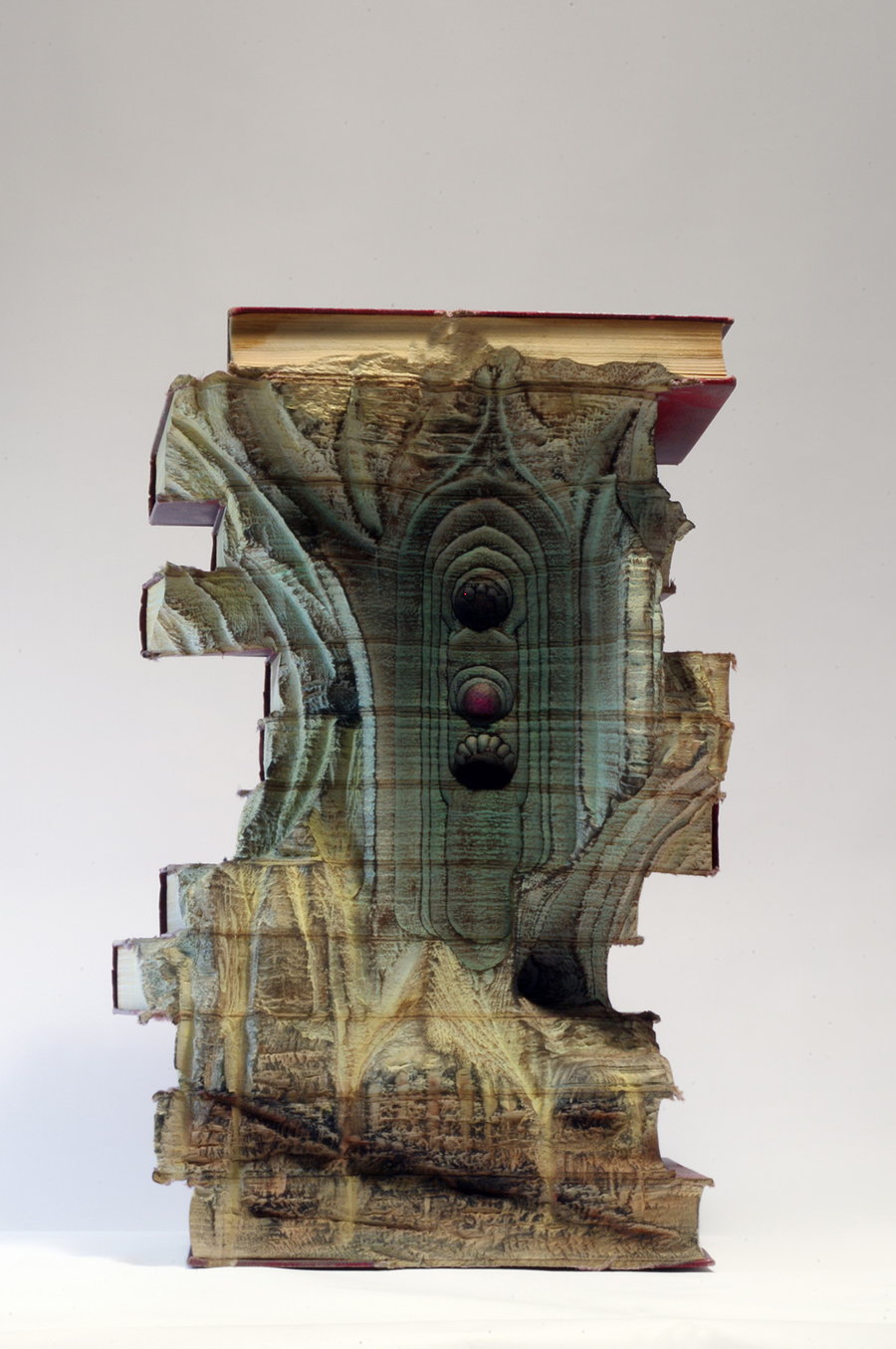 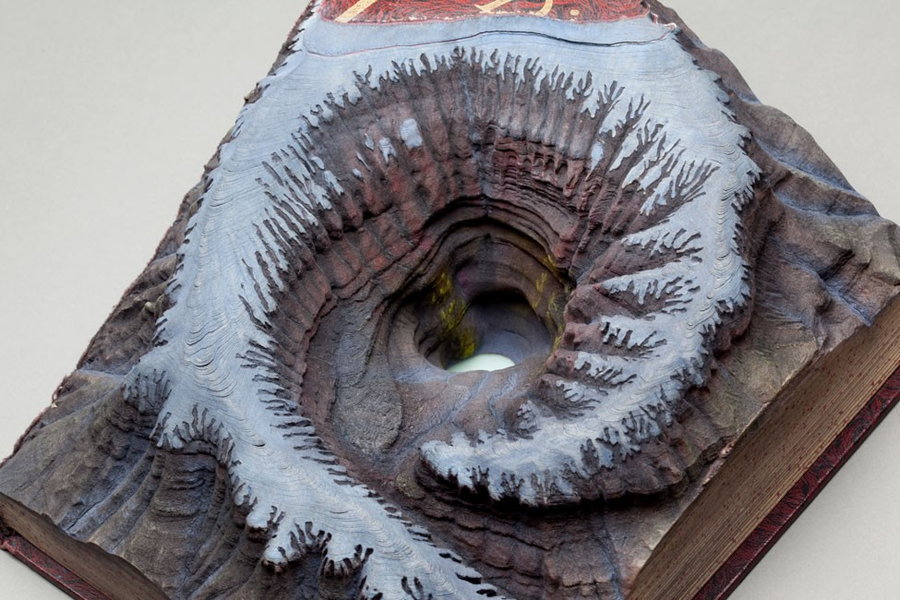 He adds: “When I was younger, I was very upset with the ideologies of progress. I wanted to destroy them by showing that we are still primitives. I had the profound intuition that as a species, we had not evolved that much. Now I see that our belief in progress stems from our fascination with the content of consciousness. Despite appearances, our current obsession for changing the forms in which we access culture is but a manifestation of this fascination. My work, in 3D as well as in painting, originates from the very idea that ultimate knowledge could very well be an erosion instead of an accumulation. The title of one of my pieces is ‘All Ideas Look Alike.’ Contemporary art seems to have forgotten that there is an exterior to the intellect. I want to examine thinking, not only ‘what’ we think, but ‘that’ we think.” 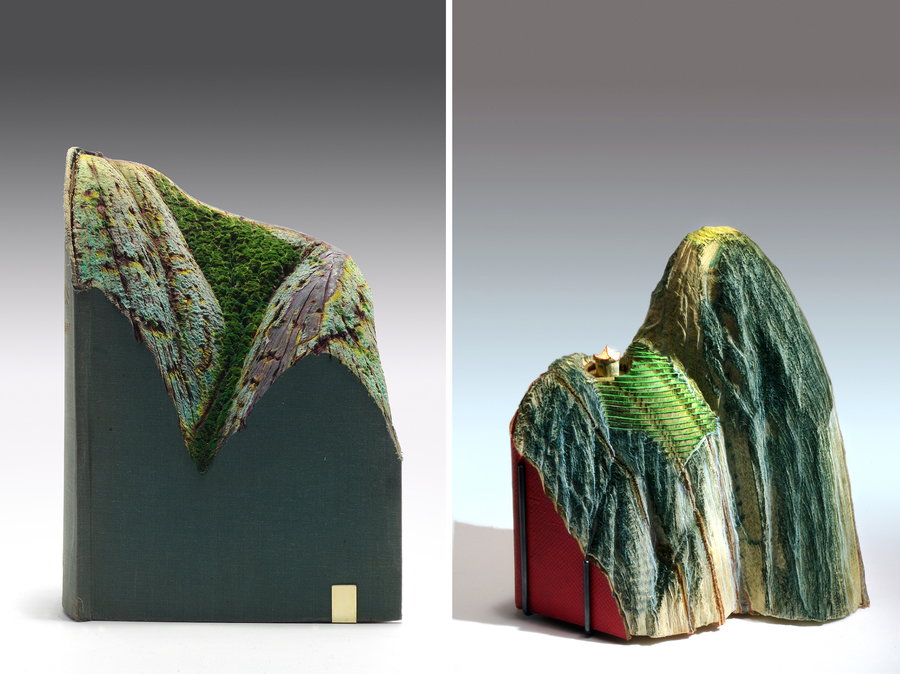 “So I carve landscapes out of books, and I paint romantic landscapes. Mountains of disused knowledge return to what they really are: mountains. They erode a bit more and they become hills. Then they flatten and become fields where apparently nothing is happening. Piles of obsolete encyclopedias return to that which does not need to say anything, that which simply IS. Fogs and clouds erase everything we know, everything we think we are. After 30 years of practice, the only thing I still wish my art to do is this: to project us into this thick ‘cloud of unknowing.’” 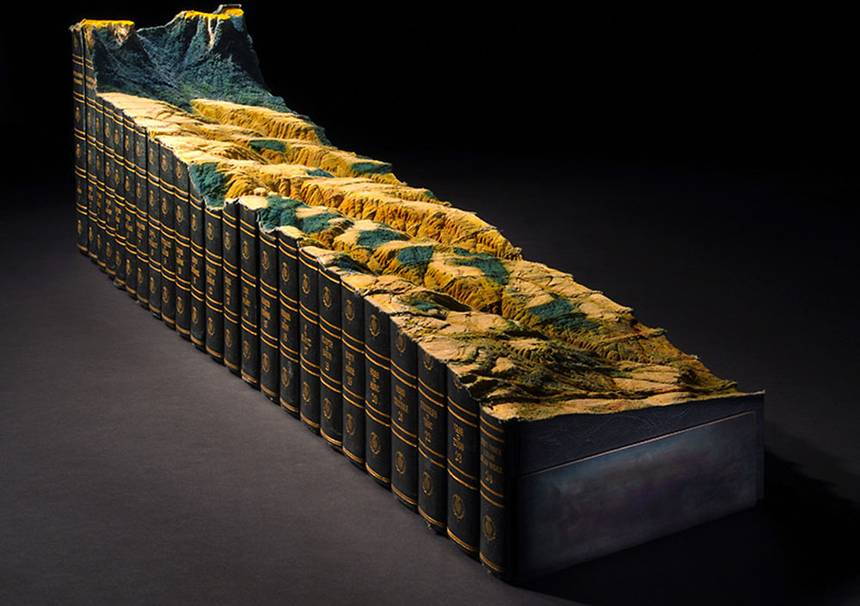 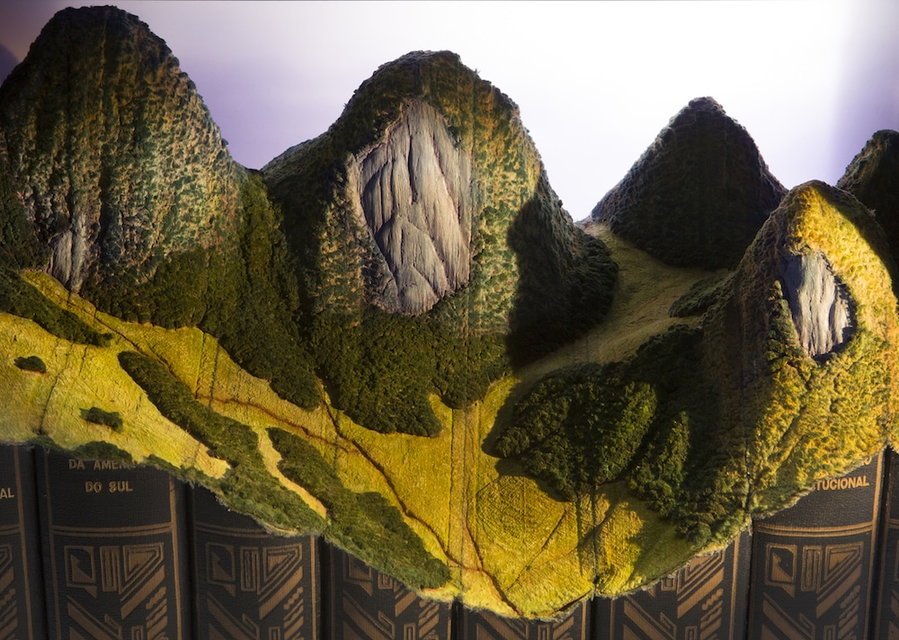 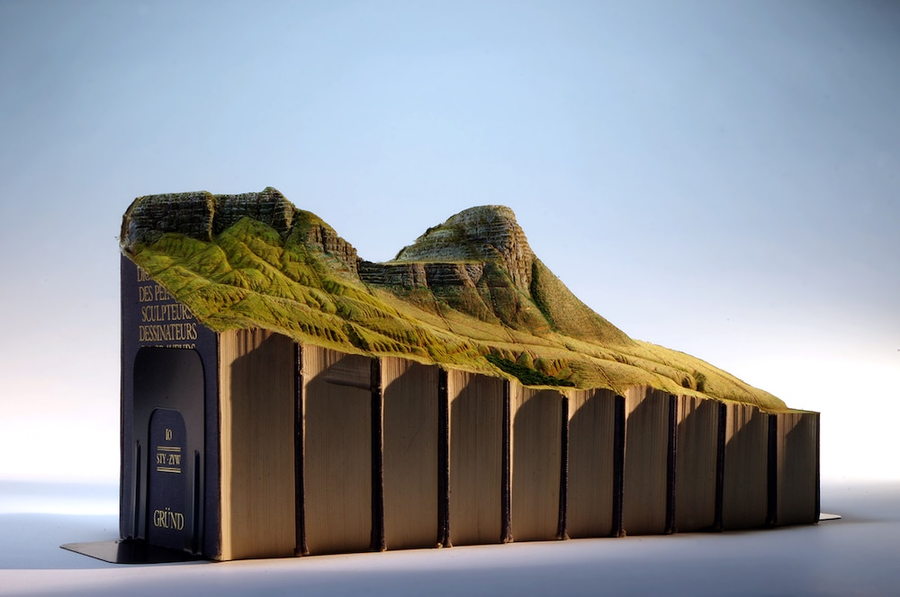 With more than 30 years of artistic practice under his belt, Laramée has many works in his interdisciplinary portfolio, including theater writing and directing, music composition, musical instrument design and crafting, scenography, painting, literature, and more. At the same time, he has deeply studied anthropology, with fieldwork covering “ethno-musicography of the Fetish ritual in Togo” and “oracular imagination among healers in the Peruvian Amazon.” Ultimately, all of these threads come together to influence each one of his unique artworks.