There’s something particularly intriguing about mixtures of old and new, historic and modern, rustic and refined. Set adjacent to one another, they exaggerate the other’s best and worst properties. In this way, the natural tones of an old stone facade feel more grounded and rooted in history when punctured by a gleaming glass addition, like this glazed meditation room set into an old home in Nanjing, China. Elsewhere, a contemporary structure engulfing an early 20th-century home in Mexico City makes its artful ornamentation even more charming (while simultaneously infusing it with a poignant sense of loss). 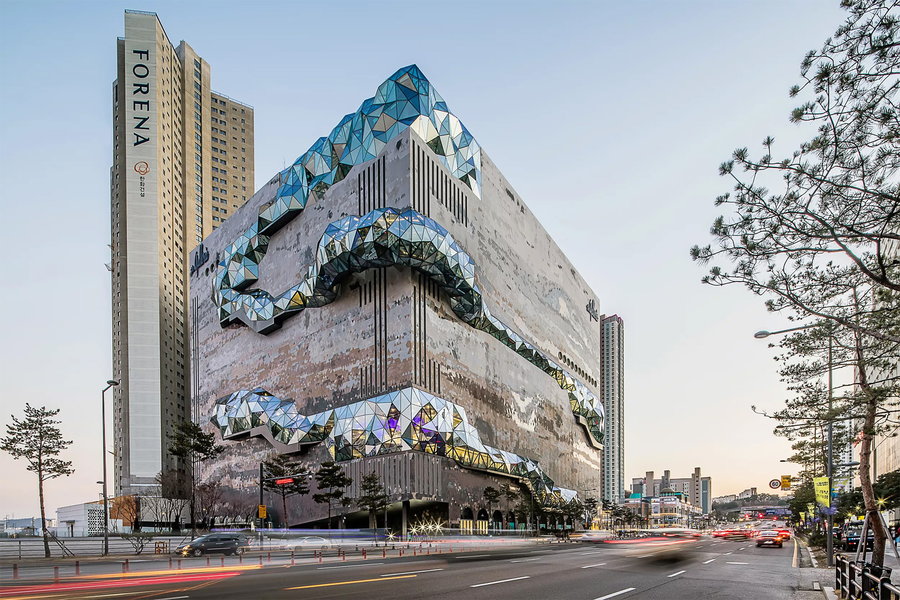 It’s that parasitic quality of contrasting new additions that can make them either fascinating or repulsive, depending on your personal perspective. A new structure by OMA manages to capture that feeling, but you wouldn’t know until you get close to it that the base structure isn’t old and historic at all. 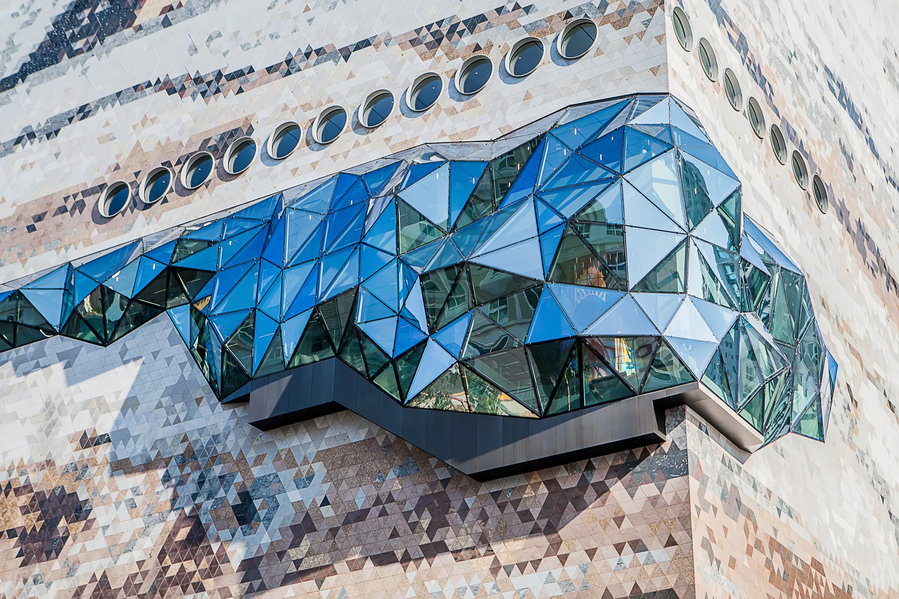 “Galleria in Gwanggyo” is an upscale department store set within the brand new town for which it’s named, just south of Seoul, South Korea. From afar, it looks like an old brick or stone industrial building that’s been sitting on the corner for many decades, perhaps vacant and abandoned for a while. The mottling of its facade suggests age and weathering. But against this neutral, textural surface billow strange new glass volumes. There’s a sense that they’re emerging from inside, too, expanding through openings like over-proofed bread dough.

Amazingly enough, the building isn’t old at all. It’s brand new construction, like the rest of Gwanggyo. A new development in a newly built town has no past or cultural heritage to draw from, and in a way, that gives it a sort of soullessness that’s entirely its own. OMA envisions the Galleria as a “natural point of gravity” for public life in the area, with a little bit of faux history bringing a touch of depth. 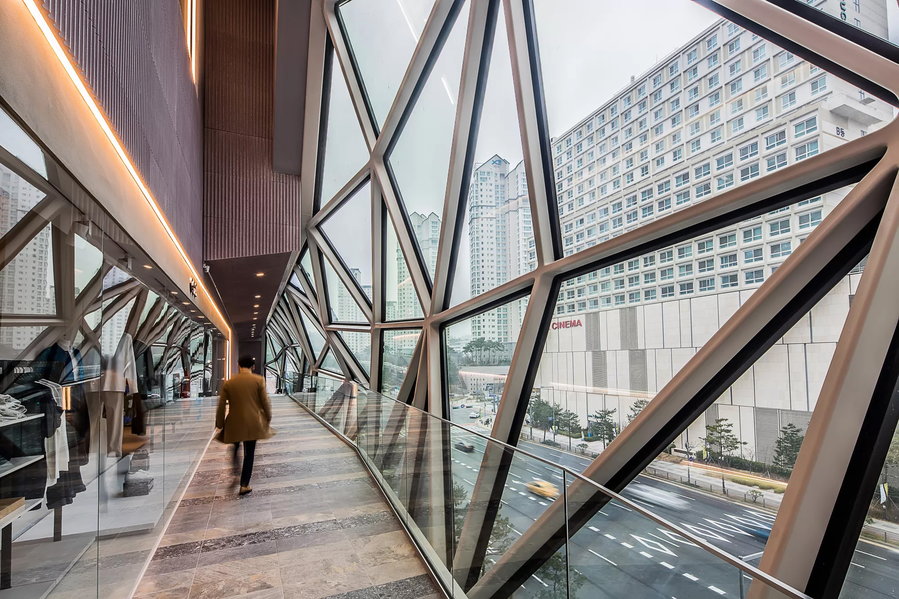 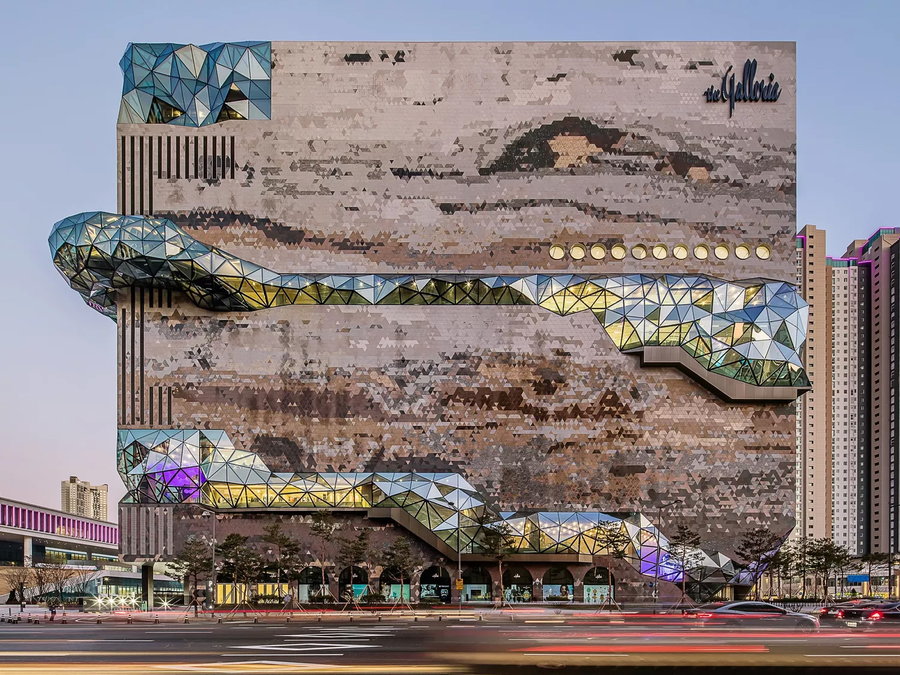 The firm adds that the building “evokes [the] nature of the neighboring park. Appearing as a sculpted stone emerging from the ground, the store is a visual anchor in the city. A public route is excavated from the stone volume and connects the public sidewalk to a rooftop garden — including both retail and cultural activities. It introduces an innovative element to the traditional typology of a department store.”

“The public route has a multifaceted glass facade that contrasts with the opacity of the stone. Through the glass, retail and cultural activities inside are revealed to the city’s passers-by, while visitors in the interior acquire new vantage points to experience Gwanggyo. Formed with a sequence of cascading terraces, the public loop offers spaces for exhibitions and performances.” 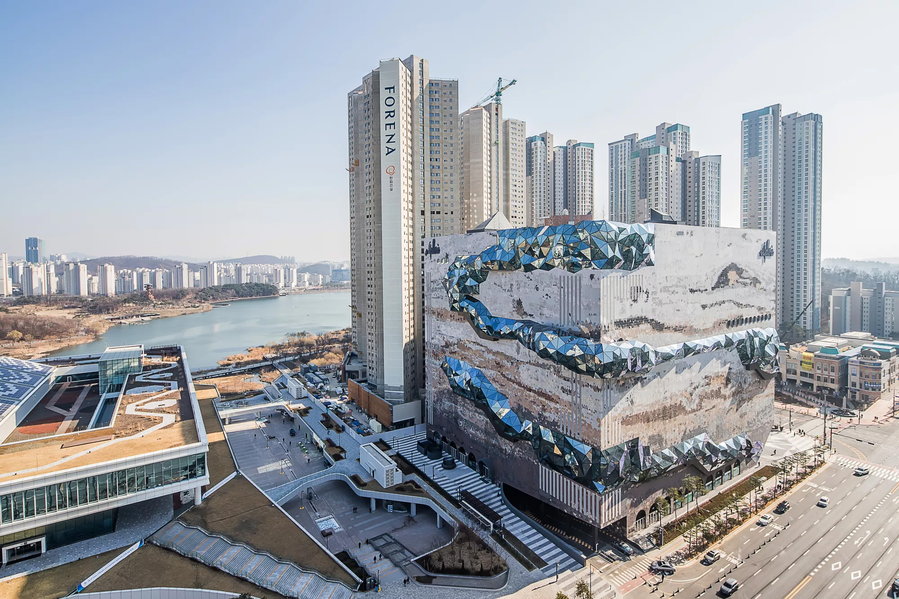 The triangular shapes within those futuristic glass elements are echoed in the textured mosaic stone facade, giving the whole project a sense of cohesiveness that doesn’t quite come together until you’re standing right in front of it. It’s an interesting reflection on the trend of pairing historic and ultramodern architectural elements, and the question of whether inventing a sense of history for new developments can ever really be effective. Do you think the architects achieved their goal?