Thanks to some sketchy creative plastic surgery, an anonymous artist has given a Spanish statue quite the facelift, earning it the dubious moniker of “potato head.” 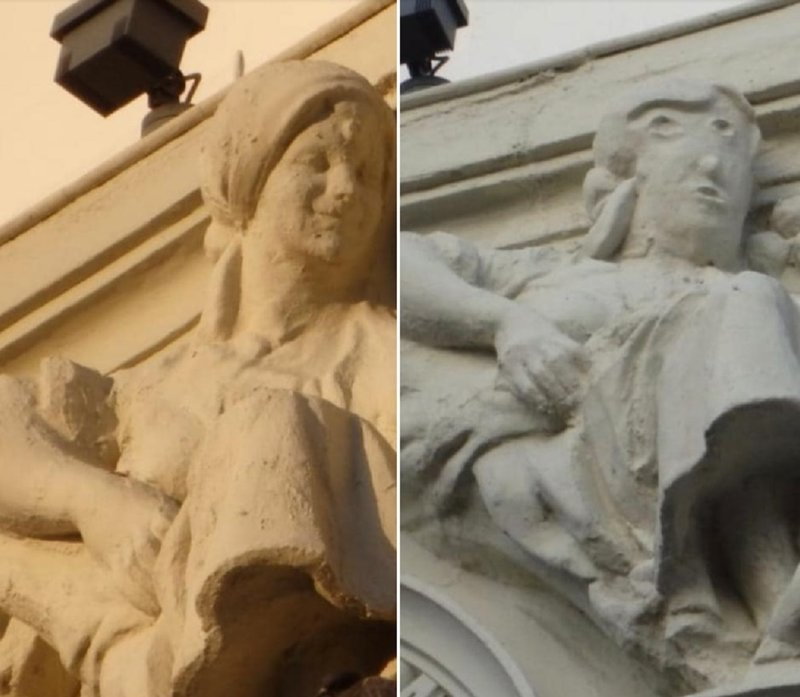 Set in a country scene above a bank in Palencia, Spain, the peasant woman’s face has been disfigured into an absurdly freakish lump. Eyes in a farcically-high position are marked by two indentations, a protruding knob makes up the nose, and the lips, once pleasantly pursed, now open into a pucker.

The spoiled 1923 statue was brought to light by a Facebook post by local artist Antonio Guzmán Capel, who said it “looks like a cartoon character.” He says that after the original head fell off the statue, someone made this “masterpiece.” Whoever commissioned the restoration should be ashamed, he adds. 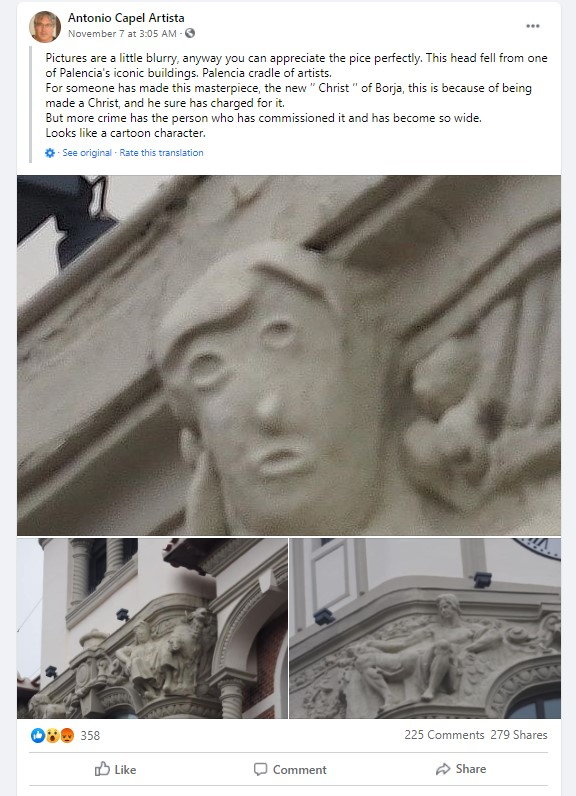 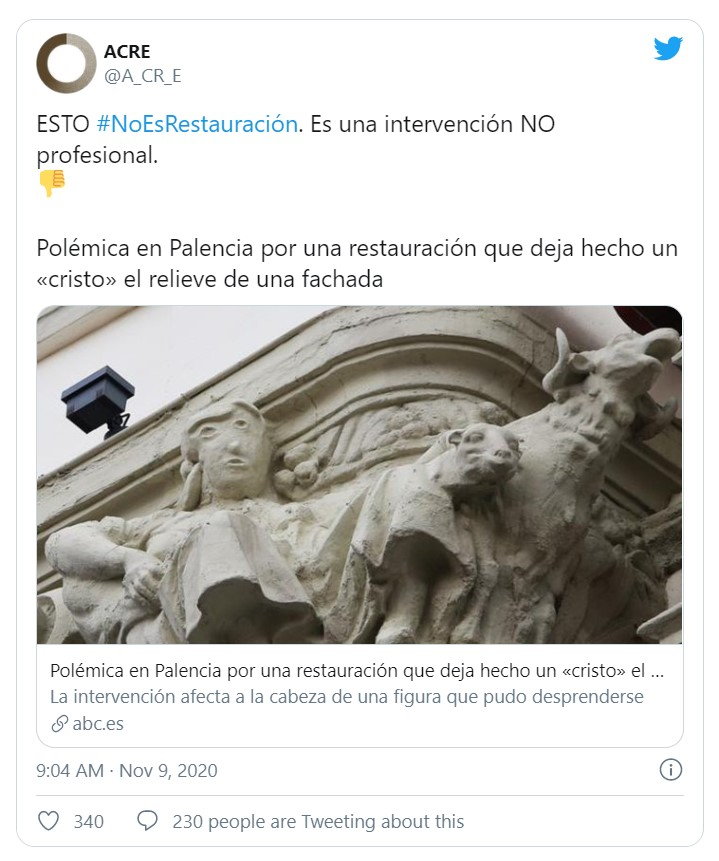 Guzmán Capel says the maimed face has actually overlooked the city for more than a decade, but no one seemed to notice it. Even though he lives near the office building, the resident only recently became aware of the peculiarity himself when a florist on his street mentioned it.

The newly-observed facade has drawn Twitter criticism from the Madrid-based ACRE, an organization of professional restorers and conservators, tweeting that “this is no restoration” and emphasizing that this was not a professional intervention.

Back in July, ACRE’s vice president Maria Borjas told Spanish news outlet Europa Press that these types of mutilating renewals happen all too often. “They are unfortunately much more frequent than you think,” she said. “Spain’s cultural heritage is in a fairly vulnerable situation.”

“We only know the cases that society denounces through press or social networks, but there are many situations where the works are intervened by people who are not trained,” Borjas continued. “The works suffer from such non-professional interventions and may cause irreversible change.” 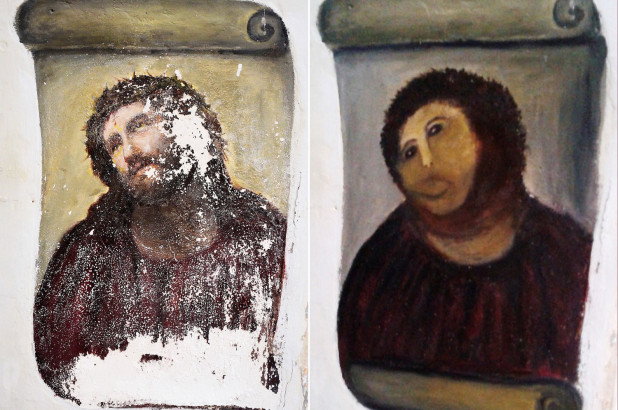 One of the most infamous botched Spanish reclamation experiments was the 2012 repainting of Elías García Martínez’s Ecce Homo fresco in the town of Borja. Dating back to 1930, the image of Jesus in a crown of thorns had started to seriously deteriorate, prompting Cecilia Gomez, an 81-year-old parishioner, to attempt a repair. Her unfortunate mangling of the art has made it world-famous as the “Monkey Christ,” so unbelievably dreadful that the image is now sold on t-shirts and mugs, an even as a cross stitch on Etsy. 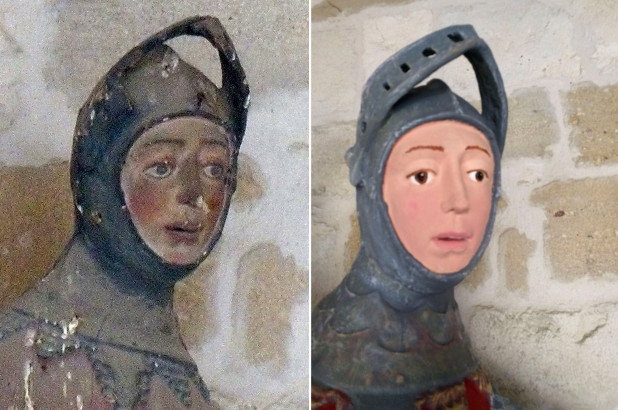 In 2018, a local handicraft teacher similarly endeavored to revitalize a 500-year-old sculpture of St. George housed at St. Michael’s Church in northern Spain, turning him into a “toy soldier” rather than a legendary dragon slayer. Thankfully, after the city’s $34,000 culture department project to “un-restore” the art, it has regained most of its earlier look.

Earlier this year, a private Valencia-based art collector allowed a furniture restorer to clean up a copy of Bartolomé Esteban Murillo’s 17th-century The Immaculate Conception of El Escorial. Displeased with the outcome, the owner insisted it be fixed. As a result, the Virgin Mary’s face is now unrecognizable from the original. 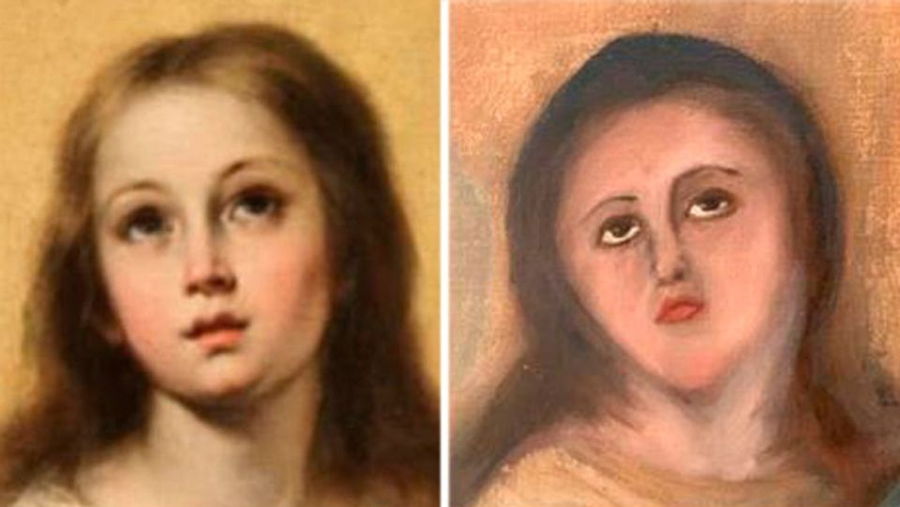 After so many instances of irrevocable art damage, ACRE’s Maria Borjas hopes that regulation regarding who can perform “cultural assets” rehabilitations will make it onto the Spanish government’s agenda soon. The one law currently on the books “does not specifically require or recommend that interventions be carried out by professionals trained in conservation-restoration. This lack of legislation leads to disastrous interventions… especially when it comes to Romanesque carvings or high-value Renaissance images.”