Twin cylindrical towers clad in greenery-covered balconies will soon rise into the sky in Pune, India, topped by a cycling track shaped like an infinity symbol. The winning entry for a competition to design a sustainable and imaginative educational facility for the city, Forest School by Indian architecture firm NUDES offers 125,000 square feet of learning environments for early childhood education through 12th grade. 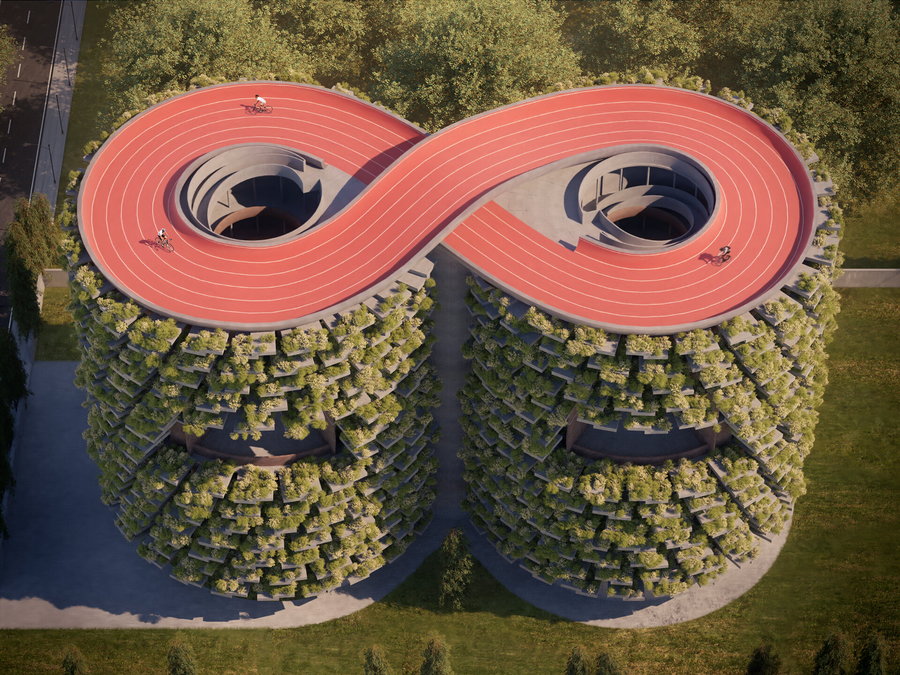 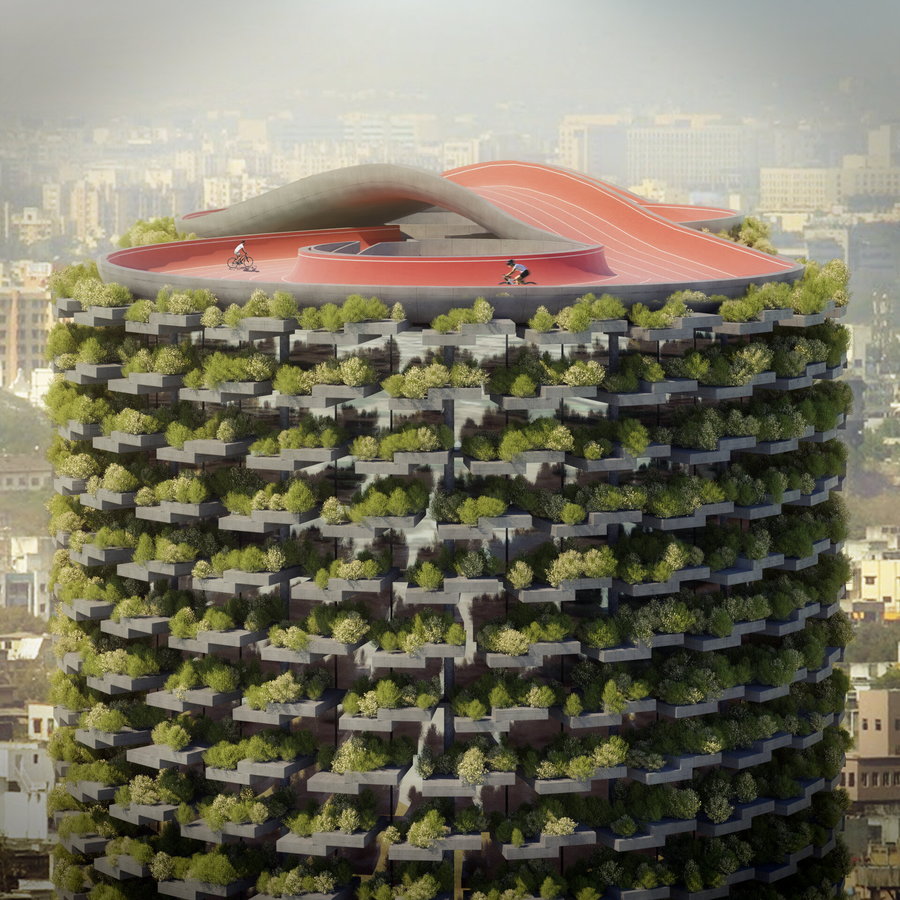 The architects identified three major needs in the city of Pune, which itself is one of the fastest-growing cities in all of Southeast Asia. With a burgeoning population, a thriving IT industry, and increasing demand for education, high quality schools are a top priority. Though it’s quite compact in size compared to other major Indian cities, with decent access to public transit, few areas are walkable, and there are no cycling tracks to speak of. Like many industrialized cities around the world, Pune also struggles with poor air quality. 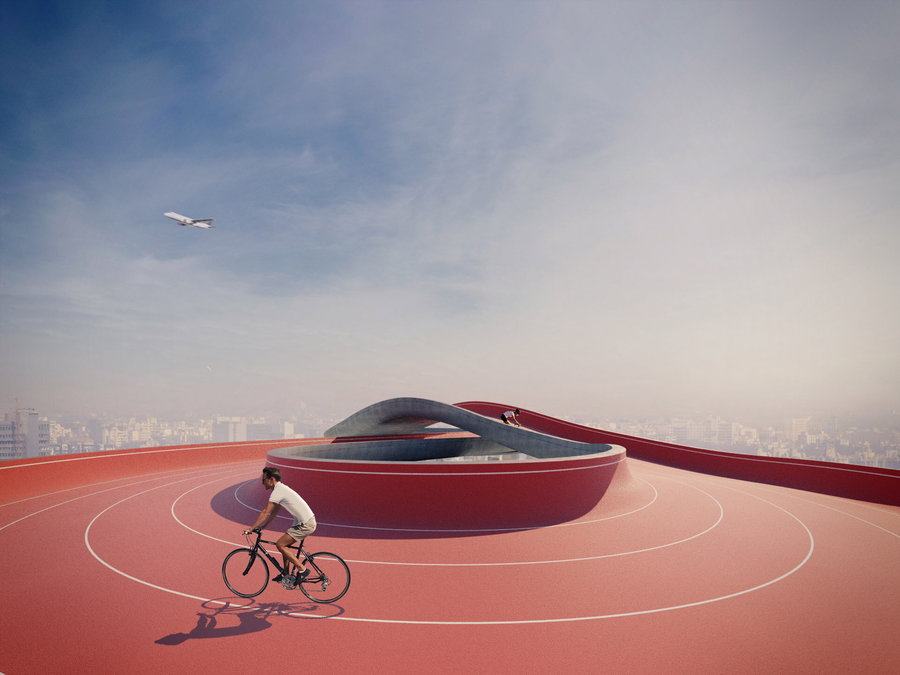 NUDES’ design addresses all of these common urban issues. Forest School can accommodate a large number of students and help boost Pune’s reputation for both innovation and high quality of life. A double-height auditorium occupies the lower two floors, while the rest are dedicated entirely to classroom space. The rooftop cycling track, which features two bridges for crossing between the towers, offers a fun place to ride a bike with unforgettable views. 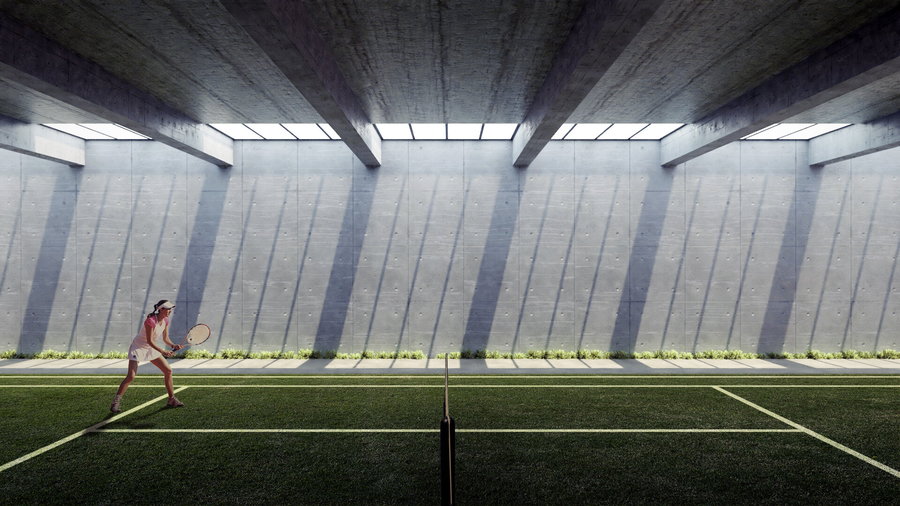 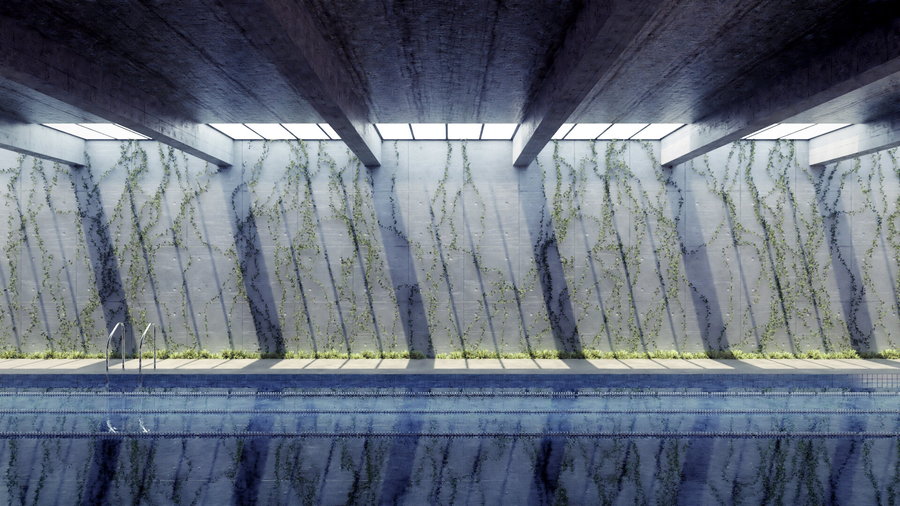 The infinity symbol on the roof may be this project’s standout feature, but those stepped balconies covered in plants are definitely eye-catching, and they’re functional, too. NUDES envisions them as one big “green living skin” that can help remove pollutants from the air through phytoremediation.

“The design explores the relation between nature and pedagogy in dense urban settlements built on the foundations of ‘Grow,’ ‘Learn,’ ‘Reuse,’ ‘Plant’ and ‘Play,’” explain the architects. “Sited in Pune approximately three hours by road from Mumbai, the city has witnessed dramatic urban growth in the last decade. The project harbors two ‘green’ cylindrical volumes stitched by a rooftop ‘infinity’ loop track.” 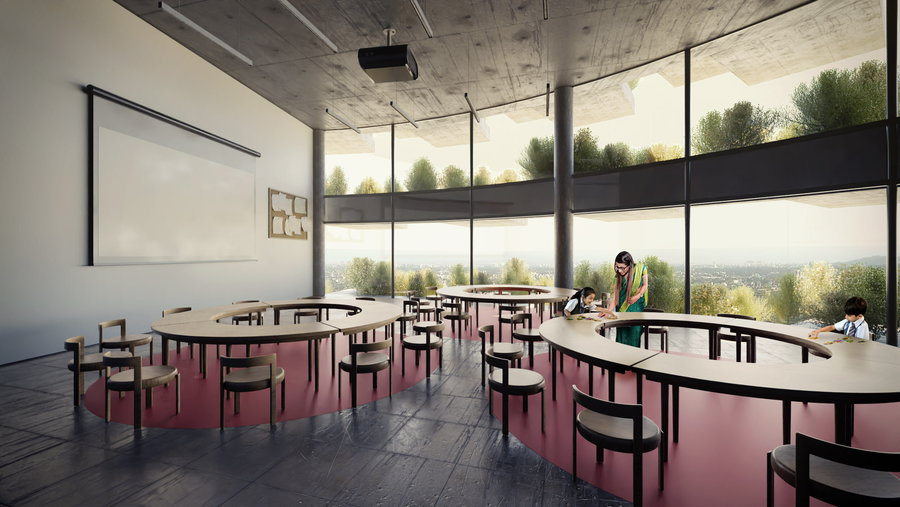 “Each cylindrical volume represents the stage of phased construction with planned programmatic activities. The project explores the dynamics and logistics of a vibrant space for student-centric interaction and learning. The ‘green’ skin can be serviced and maintained by a peripheral service track that is accessible from both landing and mid-landing levels on every floor by horticulturists.”

Forest School is just the latest unusual educational design from NUDES. The firm previously designed a conceptual school in Malawi with sinuous curving walls made of stacked straw bales in response to an architectural competition by Archstorming on behalf of an NGO called Active Africa. The brief called for the use of local materials and construction systems, a focus on sustainability, and a modular solution that can be built in phases. Straw Bale School features a modular “ladder” component to form a structural system that’s fluid and easily expanded. 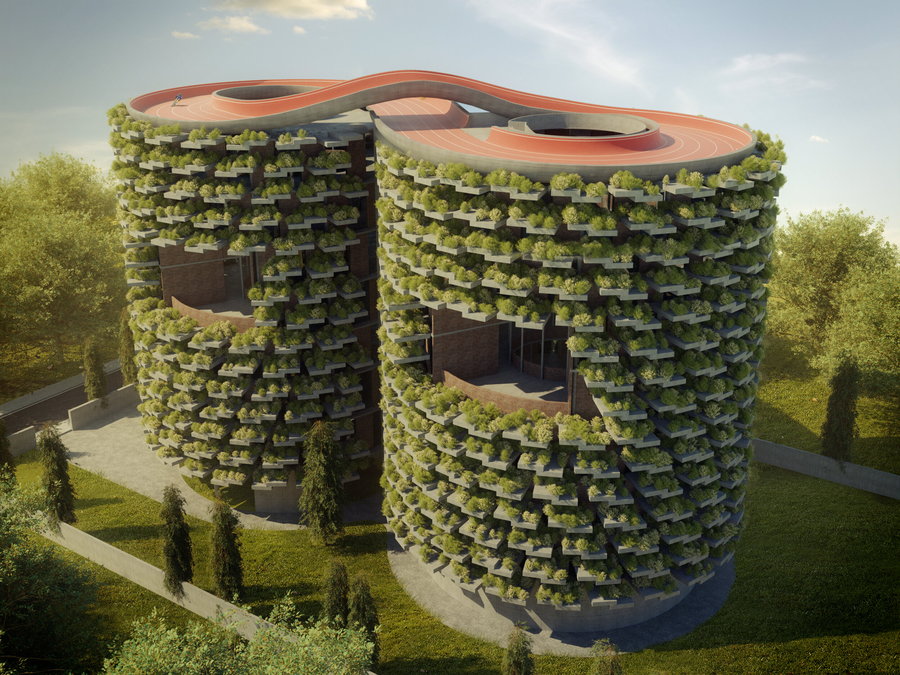 NUDES is led by architect Nuru Karim, who received his Masters in Architecture and Urbanism from the Architectural Association London in 2006 and has previously worked for Zaha Hadid Architects. He explains that “NUDES operates within the realm of cross-disciplinary cultures of art, architecture, and computational design powered by digital ‘making’ tools addressing larger social, cultural, and environmental networks.”