The history of the hermitage is a long and fascinating one, telling of monastic religious figures, social outcasts, novelists in seclusion, war deserters, and the kinds of mysterious older women often assumed to be witches. Humble and small, the habitats preferred for a life of utter solitude are typically found in remote places like forests or mountaintops.

They’re often shed-like in their scale and the low sophistication of their materials, containing little more than a bed and a table. Some of the people who occupy them might be seeking wisdom or healing in asceticism, while others might be fleeing outside influences.

A small, lone cabin in the woods might still strike fear in the hearts of hikers who stumble upon it, especially if it’s particularly rustic or unkempt – but even modern remote hideaways can look like they belong in fairytales or horror movies. When a man in the Czech Republic wanted to build himself a retreat where he could “hole up” and recharge in between demanding projects at work in the city of Prague, he approached Uhlik Architekti with an unusual vision.

No doubt, the finished project is odd, and still, perhaps, a little unsettling. Pitch black on the outside, it’s tipped up onto a boulder on one end, almost as if it fell from the sky. Gazing at it within these woods, one could imagine all sorts of strange backstories for its presence. The truth about its usage may be mundane, but the cabin itself certainly is not. 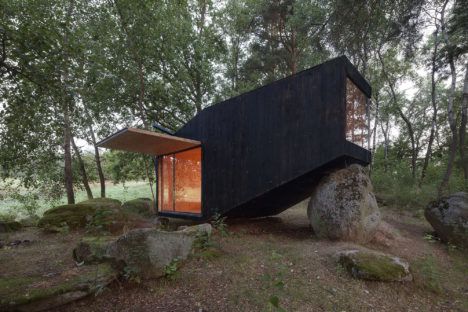 The architects call the setting “a remote and somewhat forgotten place” in the woods between Central and South Bohemia, where the client comes from. Finding a particular sense of magic there, the architects decided they’d build the cabin with their own hands using wood from nearby forests and the skills of local craftspeople. The exterior is charred pitch black, while the budget-friendly plywood interior glows amber by lantern light after dark.

Steps lead from the standing-height bedroom at the entrance up to a resting spot elevated over the boulder. Each step provides a place to work, eat or sleep, with the space beneath them devoted to storage. One of the benches even folds over to create a double bed. 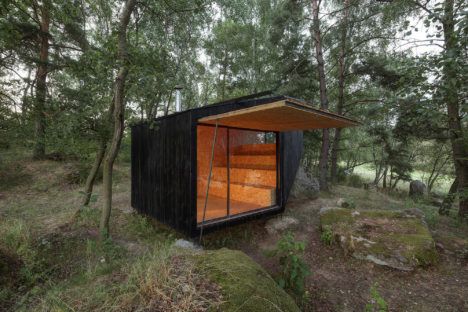 Both of the glassed-in openings can be enclosed and protected by large shutters, one of which is operated by an old-fashioned pulley and hand winch. The angled roof, covered in asphalt tiles, easily allows water to drain off to one side, diverted from the entrance by the rail of the pulley wheel. All of the steel components were crafted by a local blacksmith, in keeping with the traditions of hermitages around the world, yet the overall effect of the “Forest Retreat” is strikingly contemporary. 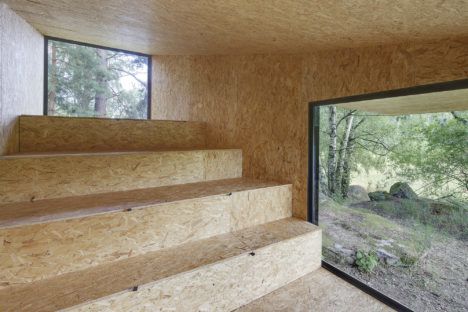 Small as it is, the space is configured either for solo habitation or for performances that can be enjoyed by a group, with the steps acting like stadium seating. One of the glass windows offers views of the treetops, while the other gazes down the rocky hillside. When the shutters are closed, the volume is certainly mysterious: a black monolith, its purpose obscure. What would you think if you were wandering around in the woods of Bohemia and discovered a structure like this?