Venturing into the waters of residential design, Argentinian-Spanish artist Felipe Pantone recently added his signature color array art to the bottom of a coastal pool. 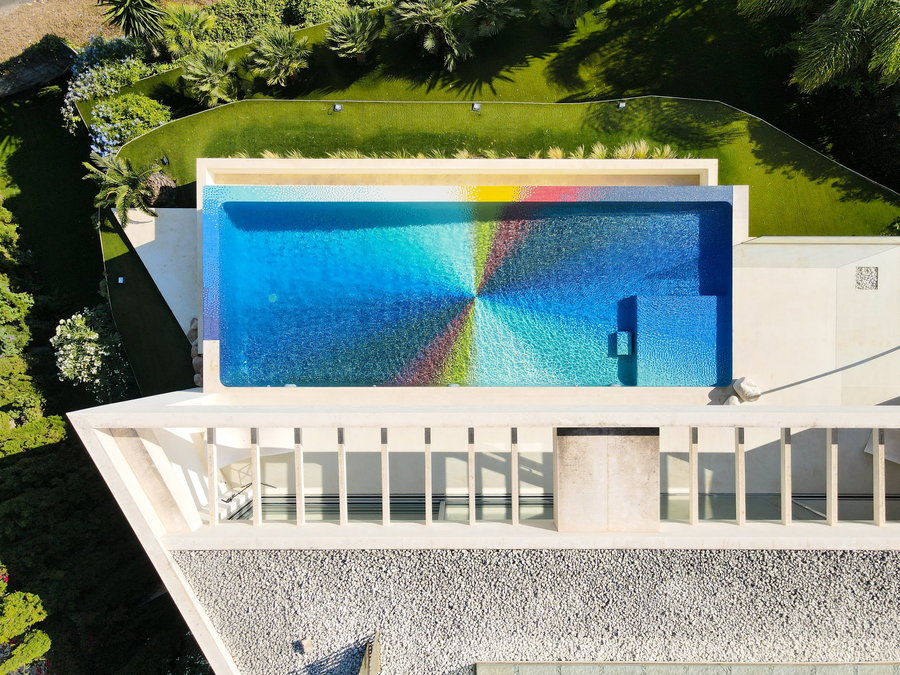 Commissioned by a homeowner in the seaside town of Javea, Spain, Pantone and his team used over 130,000 one-inch ONIX tiles in just seven colors to create a stunning underwater prismatic pinwheel. Known for his work with light and color, the mosaic spectrum of blues, yellows, and reds showcases the artist’s brilliant way of melding individual pixels into a seamless rainbow of movement. 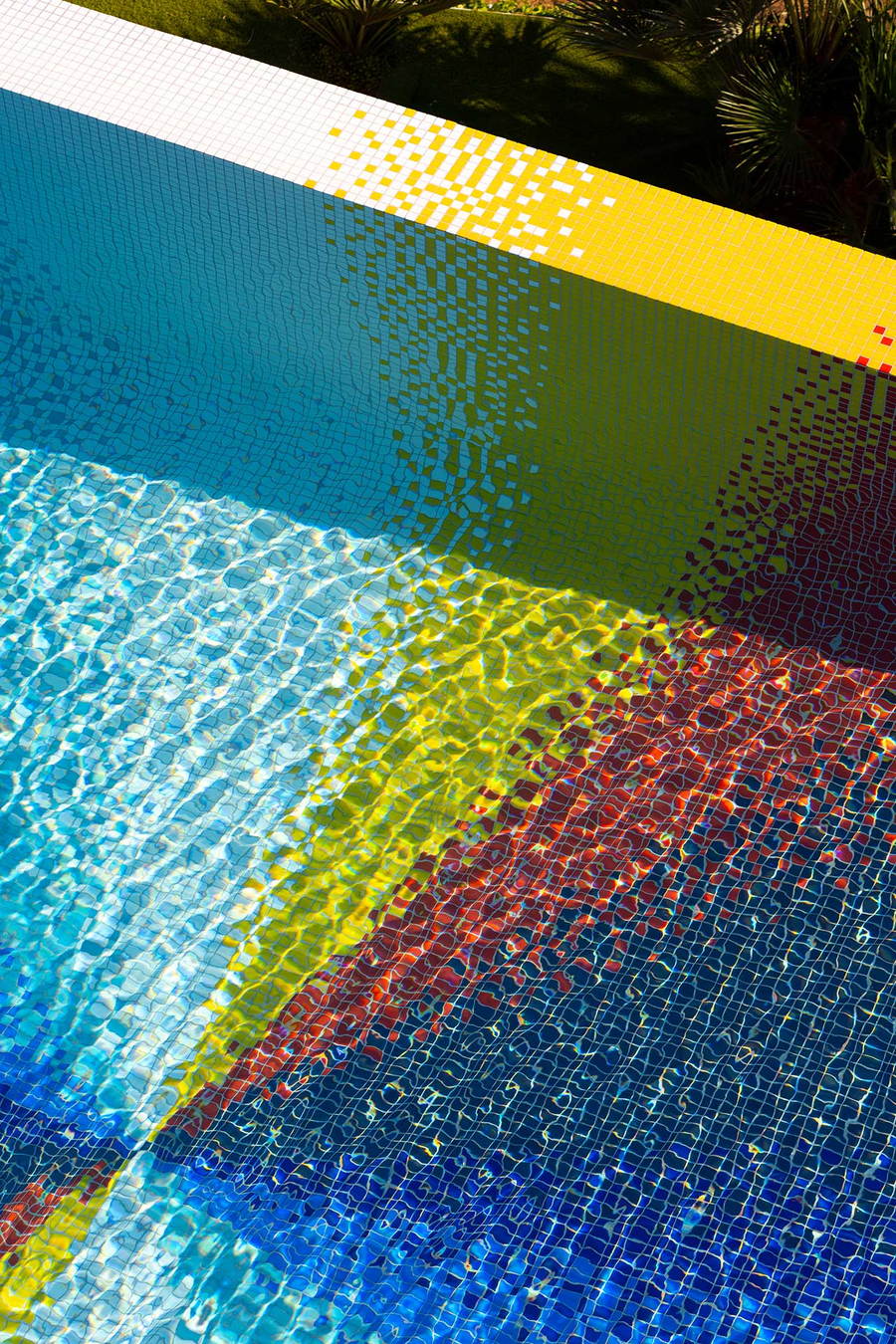 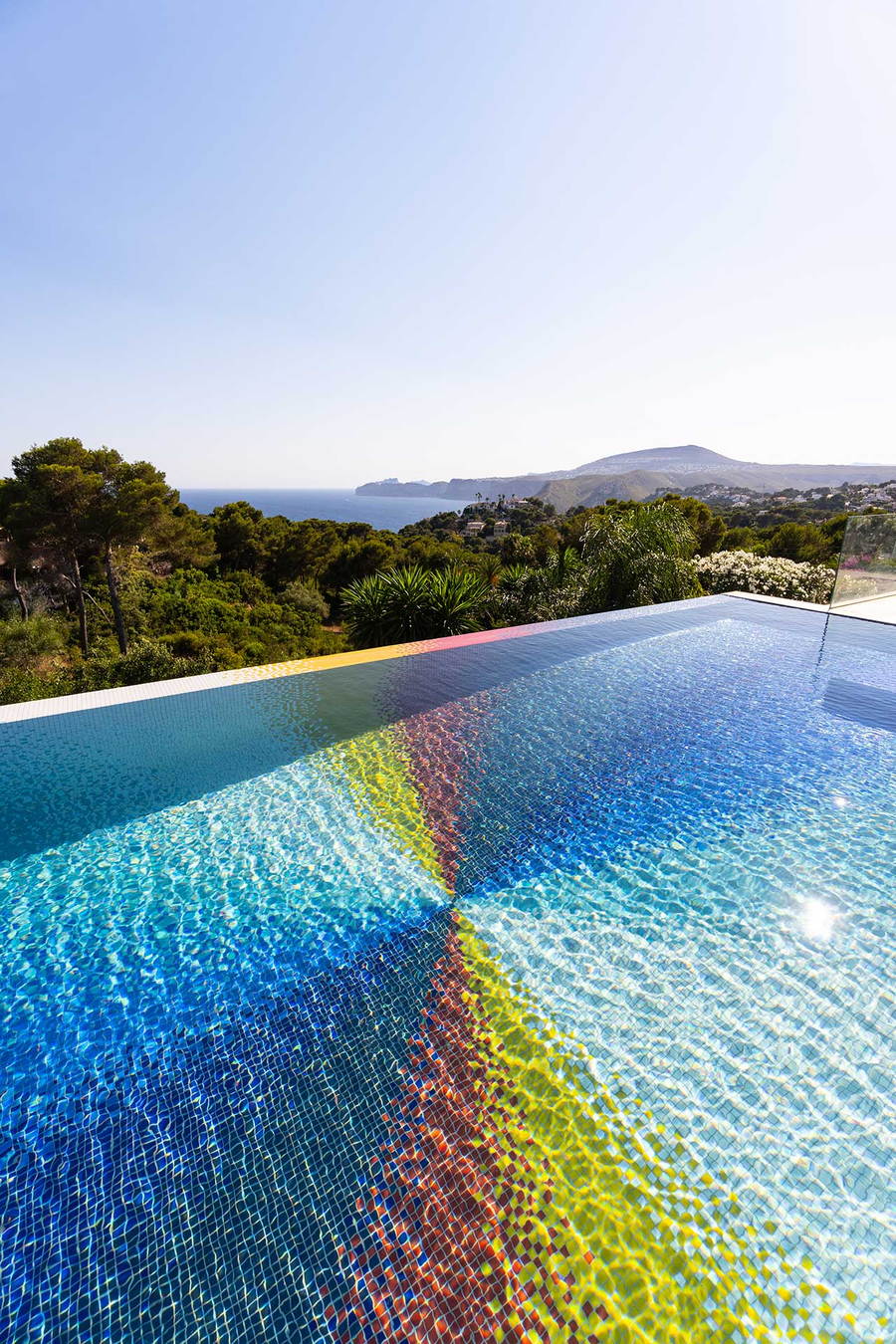 “Color only happens because of light, and light is the only reason why life happens,” Pantone writes on his website. “Light and color are the very essence of visual art. Thanks to television, computers, and modern lighting, our perception of light and color has changed completely.”

His process begins digitally as he works with various computer software to invent his designs. Then comes the manual manipulation of materials — in this case tiny colored glass tiles — to bring his kaleidoscopic vision to life. Radiating out from the very center of the pool, the colored squares flow over every inch of the floor and up and over the side walls, extending the optical illusion to its fullest degree. 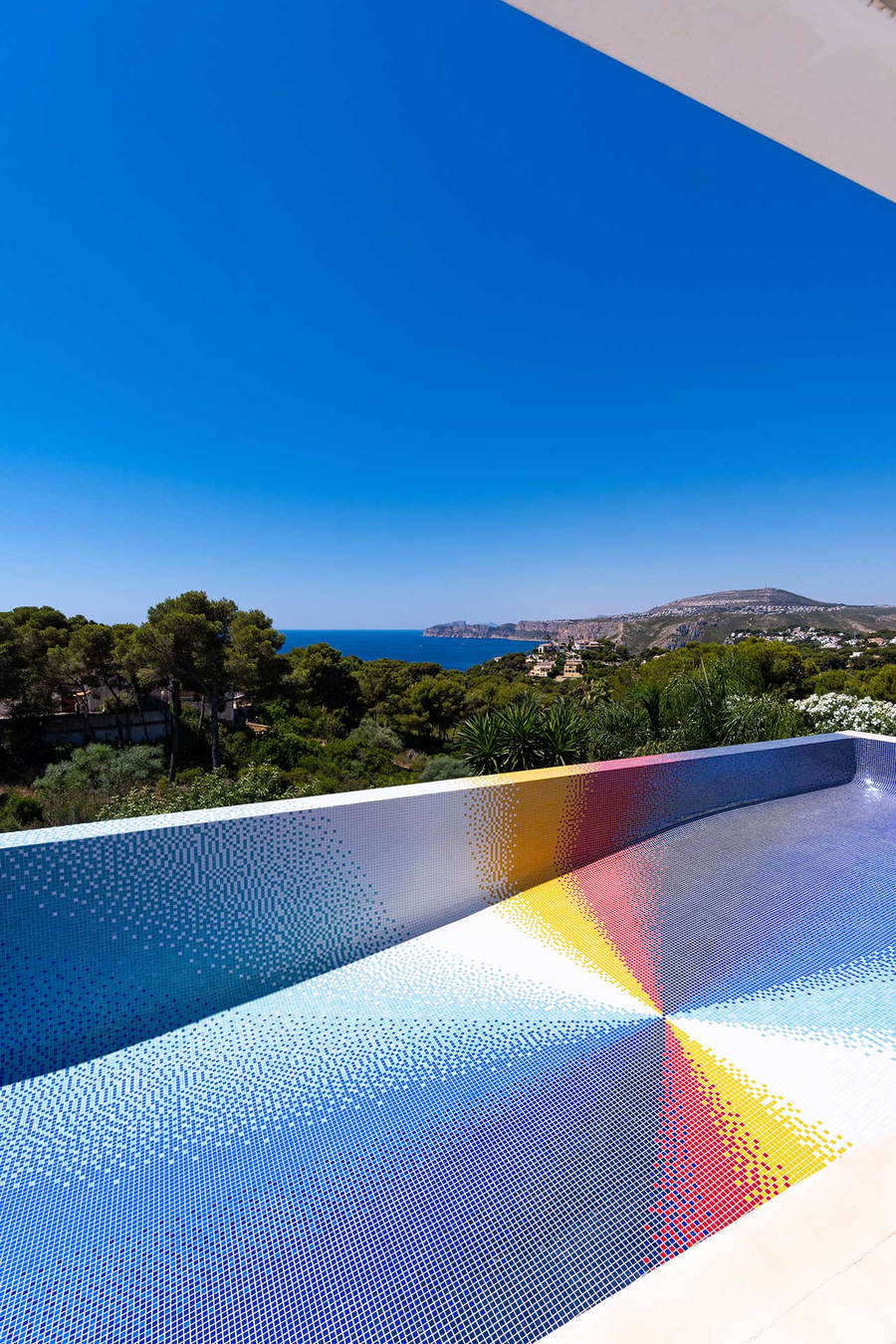 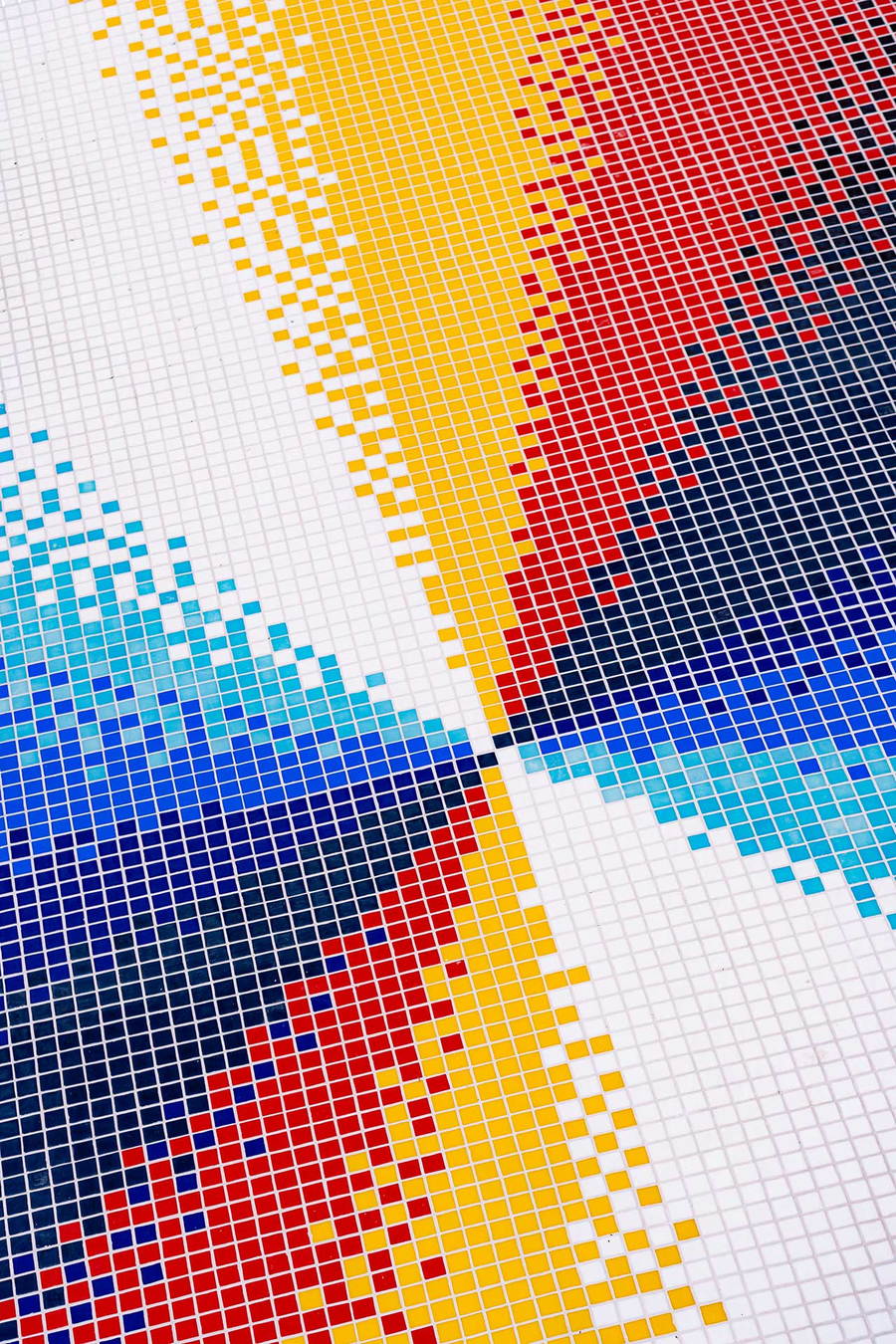 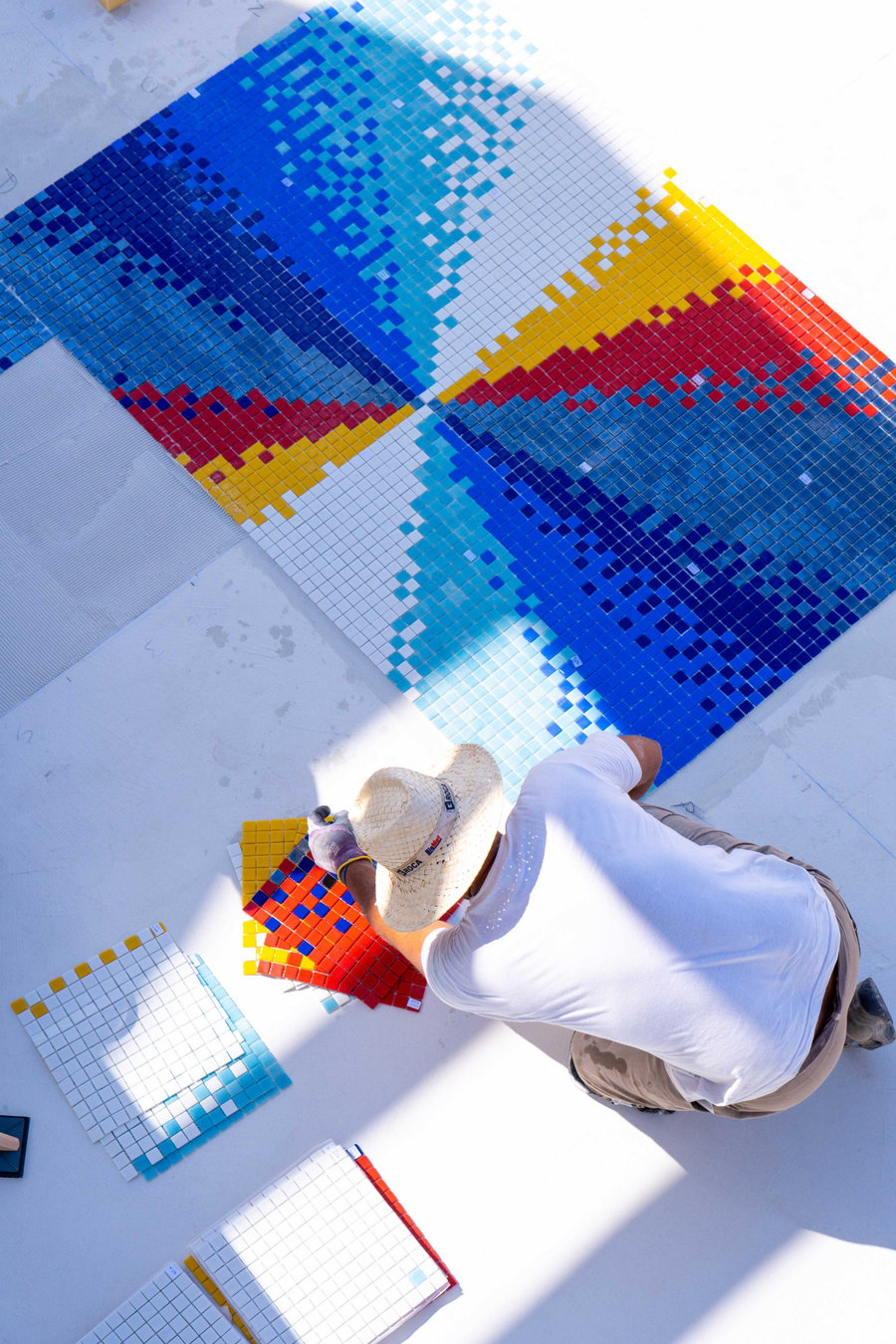 The vibrant pool, which he calls the Felipe Pantone Residential project, is even more dramatic because of its juxtaposition with the starkly white modern home it’s attached to. From above, the tiled pattern appears to shift and gyrate beneath the water’s waves.

Born in Argentina, Pantone and his family moved to Spain when he was 10 years old. It was there he spent the remainder of his youth outside near the seaside stand his parents ran, finding artistic inspiration all around. “I was hanging out on the streets all day, immersing myself in the hip-hop culture, dancing breakdance, meeting graffiti artists,” he explains. Pantone eventually started making his own graffiti for fun before heading to the University of Valencia to get a degree in Fine Arts and unleashing his unique style on the world. 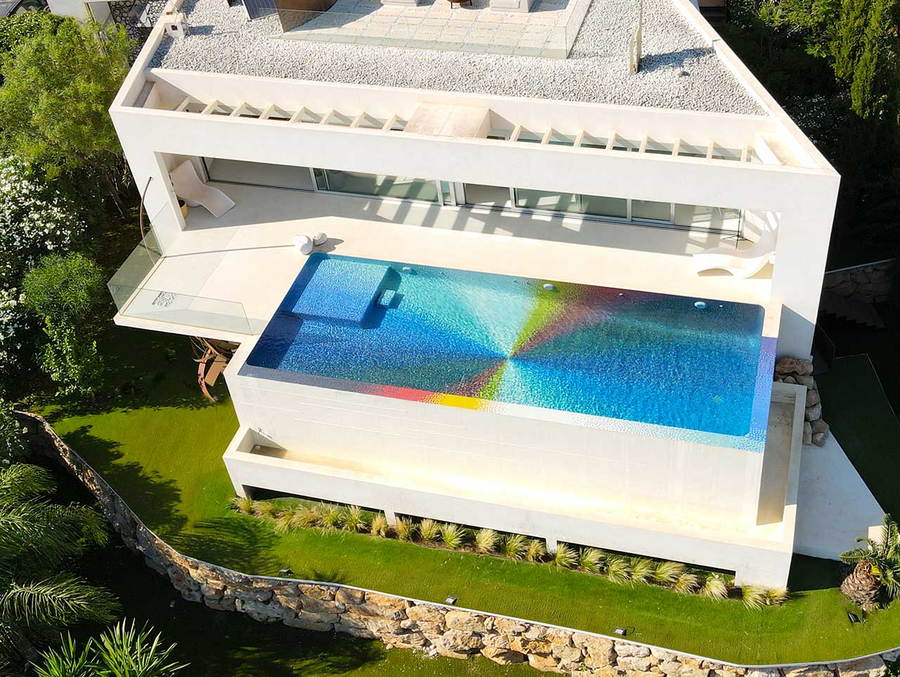 “I grew up as a painter, trained as a painter, and now my biggest goal is to get clear of all the academic training and to be able to make art freely, with the tools that work best,” he says.

Having grown up in a technological age when “kids unlocked life’s mysteries through the Internet,” his art is self-described as “a collision between an analog past and a digitized future, where human beings and machines will inevitably glitch alongside one another in a prism of neon gradients, geometric shapes, optical patterns, and jagged grids.”

Thanks to his bold use of color and geometry, Pantone’s aesthetic has been depicted by Forbes as “the intersection of Blade Runner and PhotoShop.” 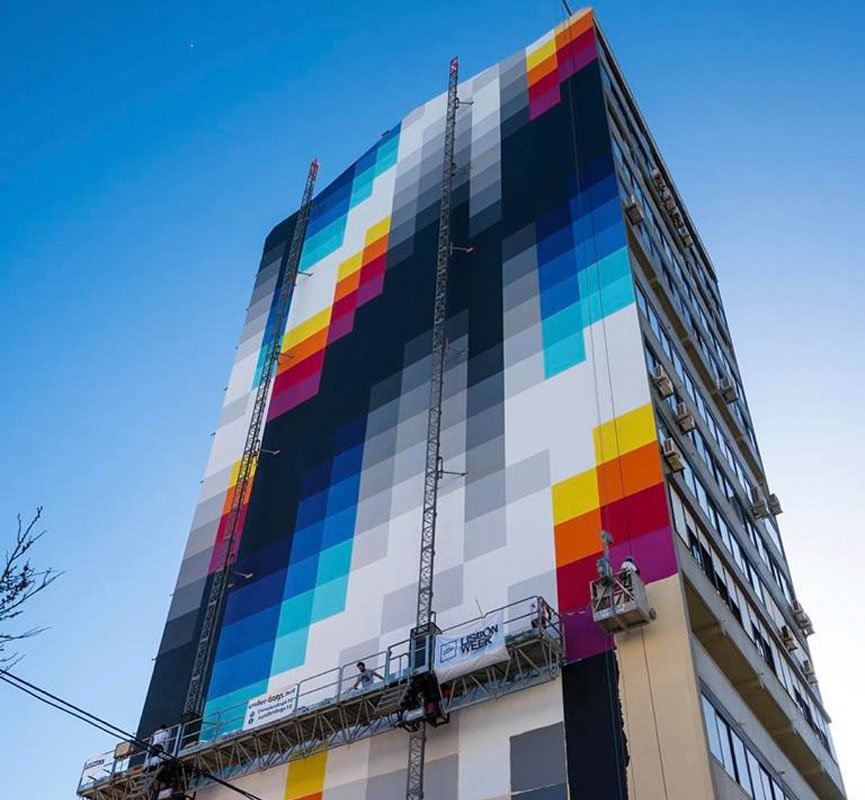 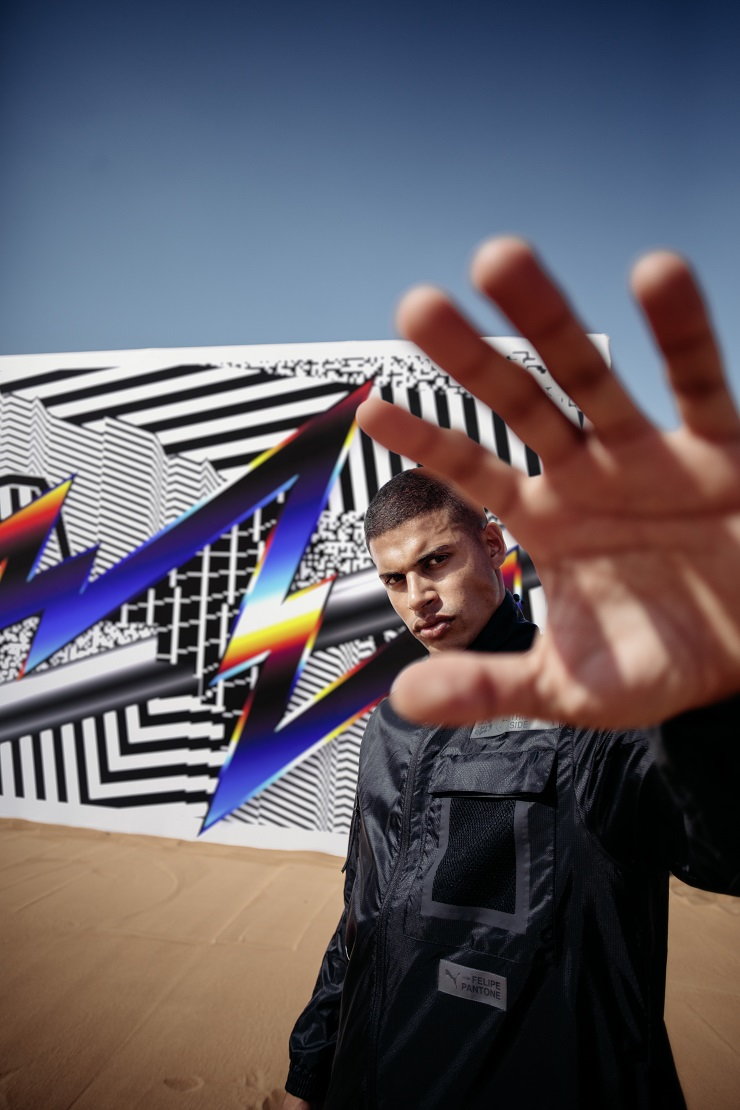 Since his first gallery exhibition in 2006, Pantone’s bright optical illusion-like work has received global acclaim, with shows and installations in places like Paris, Mexico City, London, Italy, Palestine, Japan, and Australia. In 2017, he even painted what was at the time Portugal’s tallest mural. He’s since collaborated with international athletic brands like Reebok and Puma.