If one thing can be said for Elon Musk, it’s that his imagination knows no boundaries. That’s never been more evident than with the November 21st reveal of the highly anticipated Tesla Cybertruck, which manages to merge futuristic functionality with high-end accessories. 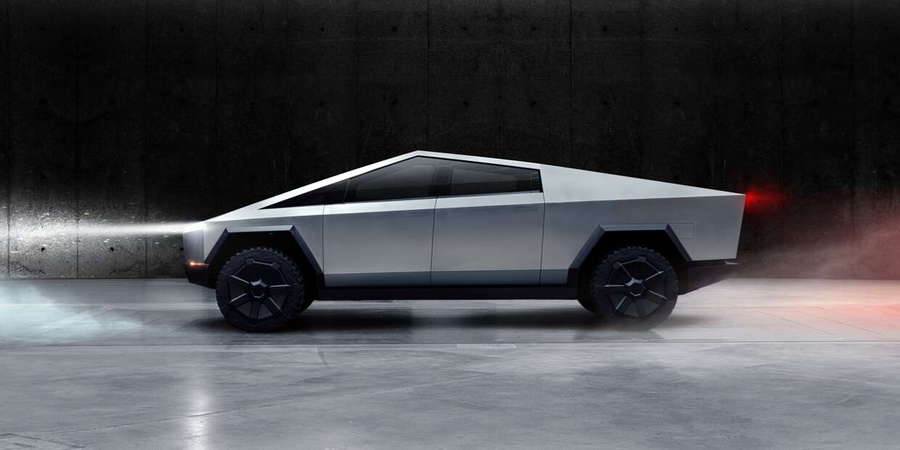 To suit all budgets and must-have checklists, the Cybertruck will be available in three distinct models. The base model is priced at $39,900 and can travel 250 miles on a full charge. The intermediate model offers a dual motor option that is all-wheel drive and is offered at a base price of $49,900. The top-end tri-engine model comes with a larger tow capacity and an impressive 500-mile travel distance between charges. It also comes with a higher price tag at $69,900. Full self-driving capabilities add an addition $7,000 to any model.

The exterior design of the prototype is most accurately described as angular and somewhat resembling a tank, which seems appropriate since the car’s cold-rolled stainless steel alloy body is basically bulletproof. The windows are described as “unbreakable,” although the windshield did splinter after being struck with a metal ball during the unveiling. Along with the undeniably striking aesthetic, the body also incorporates a couple necessary features, such as the light bar that runs along both the back and front of the truck.

Looking past the exterior, which Tesla labels the “exoskeleton,” the Cybertruck is built to work. Strong by any definition, Musk designed it with the goal of introducing a superior vehicle in every category from safety to function. With that in mind, the fully electric workhorse has a load capacity starting at 3,500 pounds, but it can tow up to a whopping 14,000 pounds. 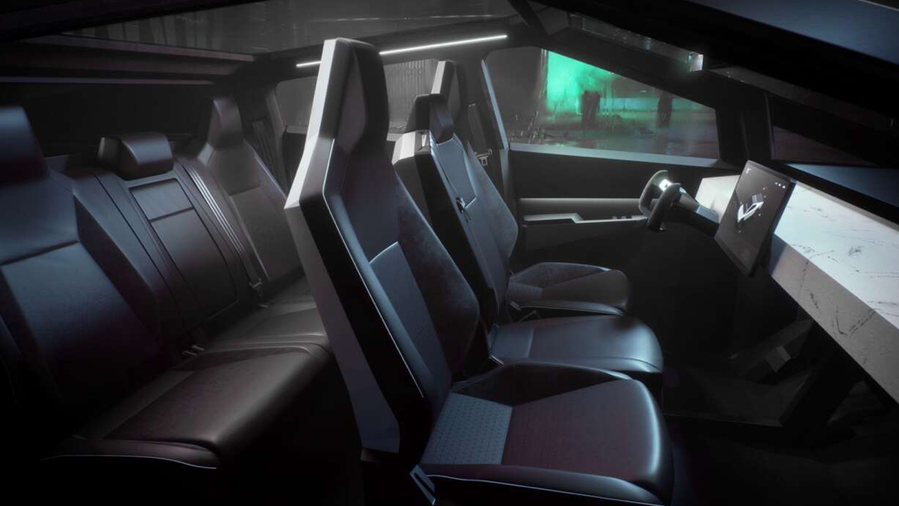 That strength doesn’t undermine the truck’s performance though, with zero to 60 speeds ranging from 2.9 to around six seconds depending on the model. For added adaptability, the Cybertruck’s suspension can also be raised or lowered four inches in either direction to adapt for loads or clearance.

True to Tesla technology, a 17-inch touchscreen controls the advanced systems onboard. This control panel rests on a marble-like dashboard. Unlike other trucks (or any other vehicle, really), the steering wheel looks more like a fighter plane yoke. The truck accommodates six in geometric-shaped seats, with the option to lower the front center seat for use as an armrest. There’s also additional storage space beneath the bench-style backseat, which also flips down so extra long loads can overflow from the truck bed into the cab. 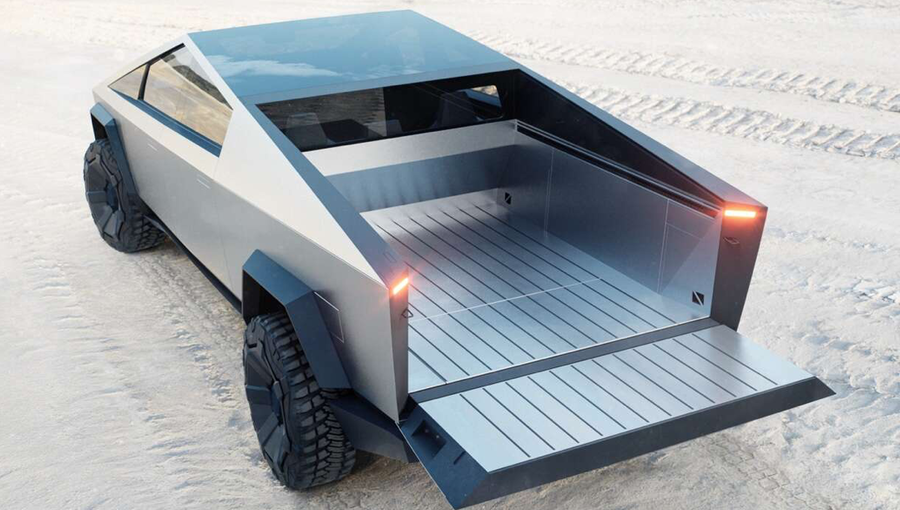 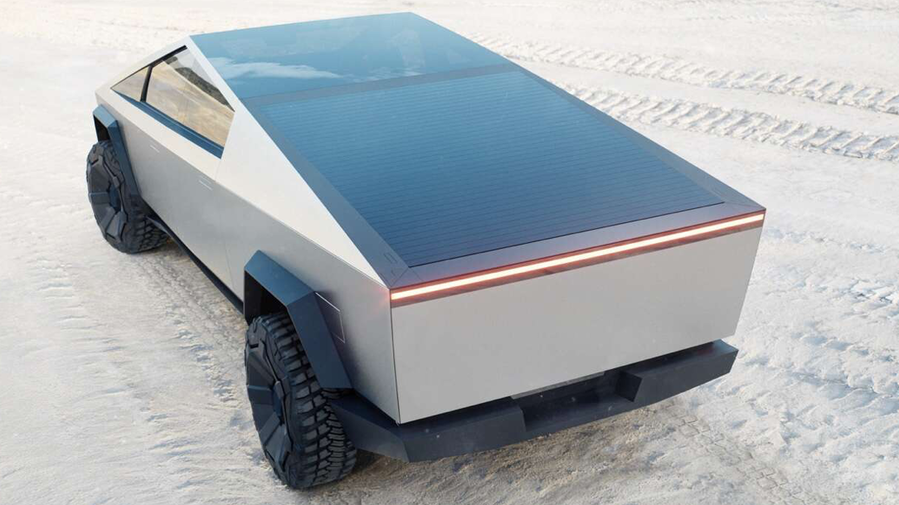 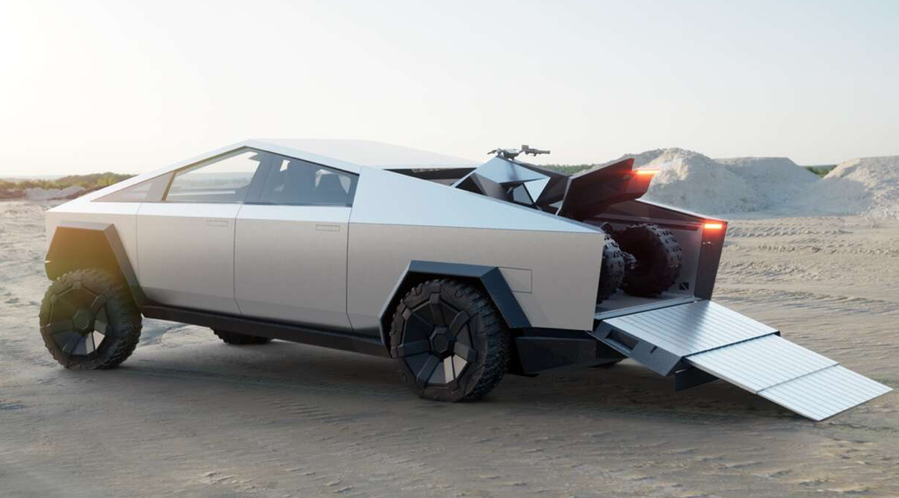 And speaking of the bed, we should probably point out that the Cybertruck has also reinvented that part of the truck. In fact, with a locking tonneau cover that’s strong enough to stand on, Tesla refers to this 100 cubic feet of storage as “the vault.” It also offers a built-in power inverter to provide both 120 and 240-volt electricity, supporting the use of power tools without a portable generator. To top it all off, the bed also houses onboard compressed air.

Musk acknowledges they still have work to do to get the Cybertruck to market, like fixing the windshield issue and probably tweaking the body style a little more. The prototype is exciting and engaging, of course, but it’s important to remember that it may not be a true example of the final product. 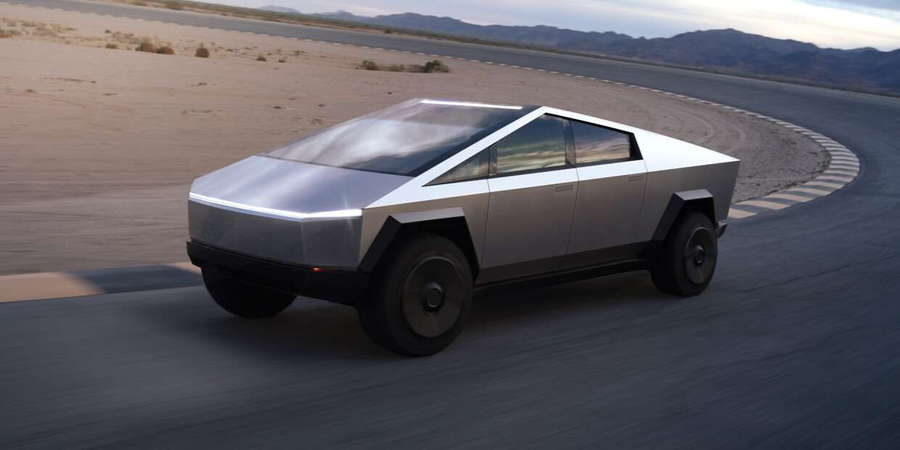 The base model is set to hit the production line in late 2021, with the top end all-wheel drive version being manufactured the following year. Deposits are already being accepted though, so you’ll have to decide soon if you want a Cybertruck of your very own!