A whimsical grove of electrically-lighted trees and bushes is currently illuminating San Francisco’s Golden Gate Park as part of its 150th anniversary celebration. 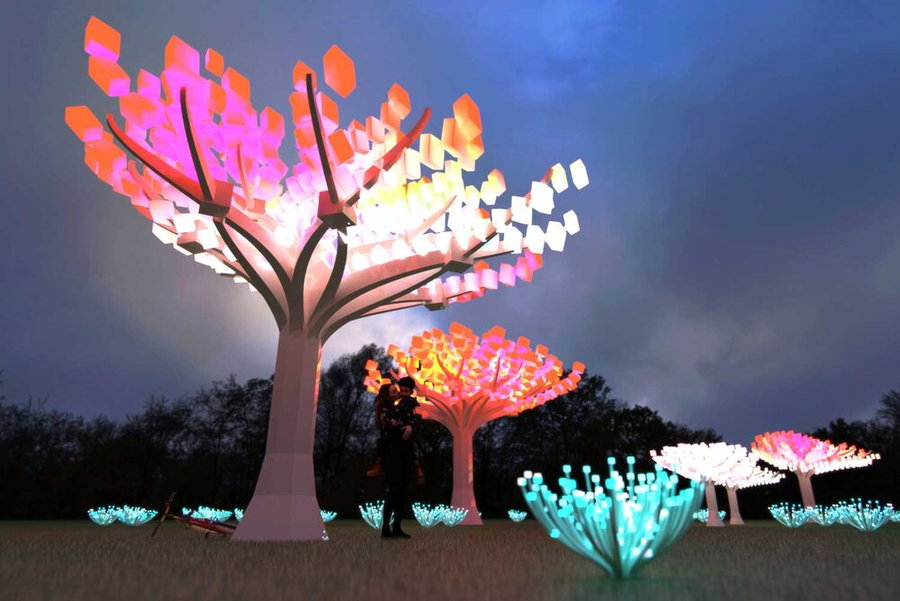 Beginning back in December 2020 as one of 40 of Illuminate SF’s annual Festival of Light installations, “Entwined” is comprised of three synthetic trees and 16 bushes, all topped with thousands of LED light cubes. Colors chromatically flow in and out of the “leaves.” The San Francisco Recreation and Parks describes the variety of LED effects as “building a sense of awe,” fashioning “raindrops on the pavement, lighting and thunderstorms, wind blowing tall grass and flowers, and ripples on a pond.” 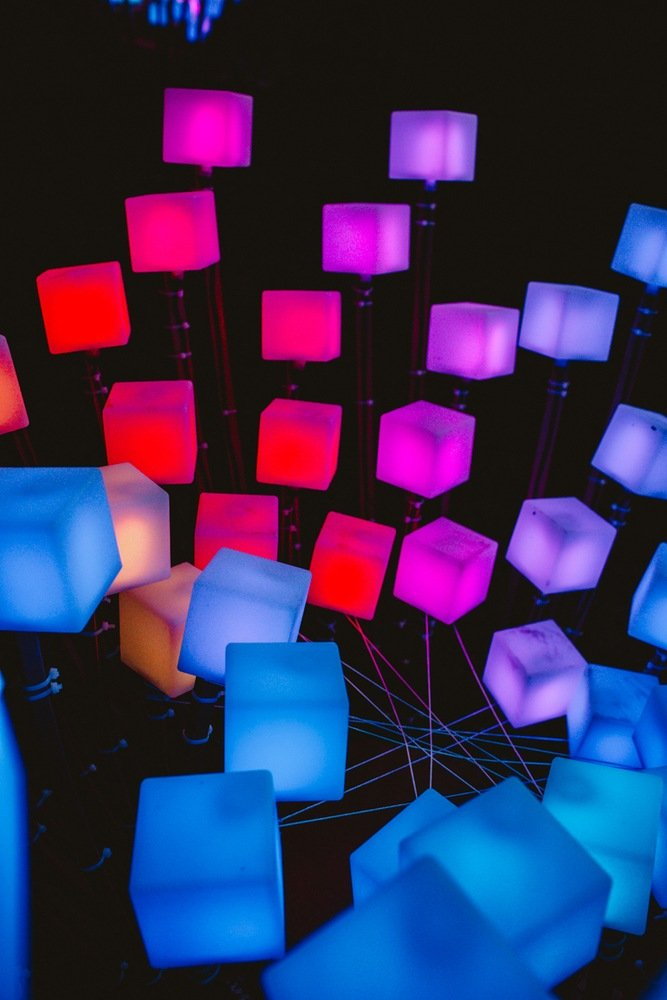 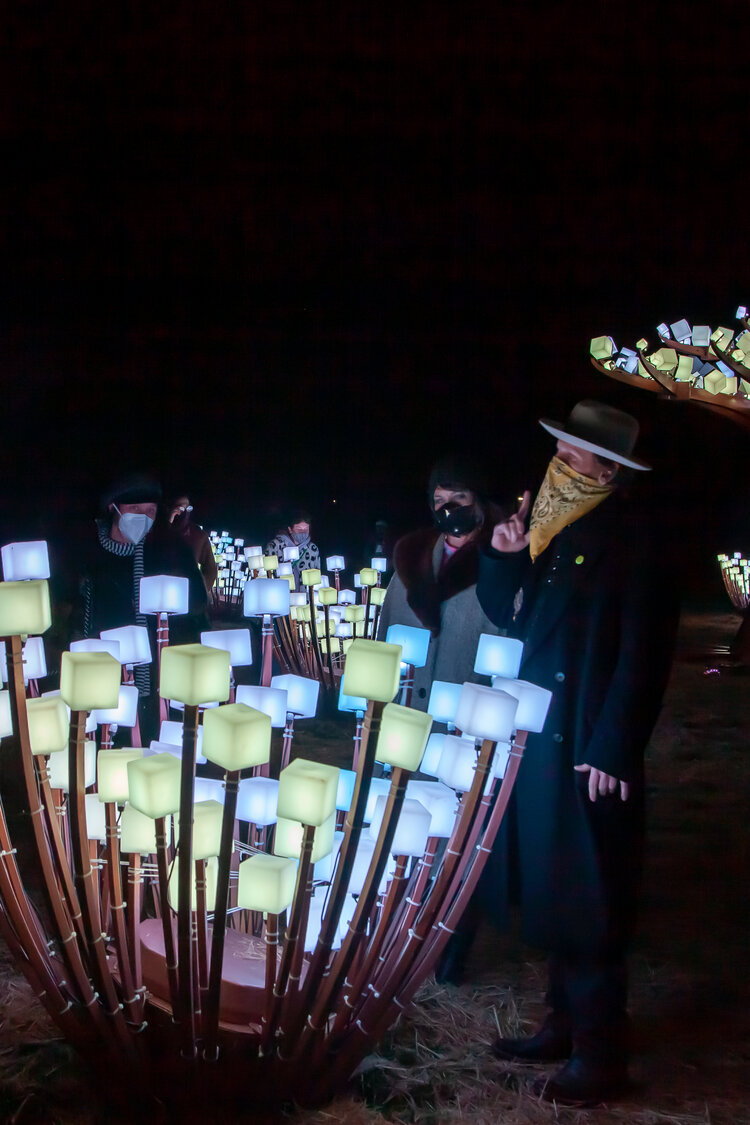 The mystical combination of darkness and glowing nature gives visitors the impression of being transported to a futuristic enchanted forest. Says San Francisco Recreation and Park General Manager Phil Ginsburg: “a twilight stroll through the park’s east [is] truly magical this winter.”

“Entwined is an immersive light experience for Golden Gate Park visitors to explore, engage with, and enjoy,” explains Entwined creator and industrial artist Charles Gadeken. “What does the ‘tree of life’ look like in the world, post-nature? The installation is my latest exploration of this question, blending timeless natural objects with abstract forms and modern technology to evoke wonder, magic, and joy.” 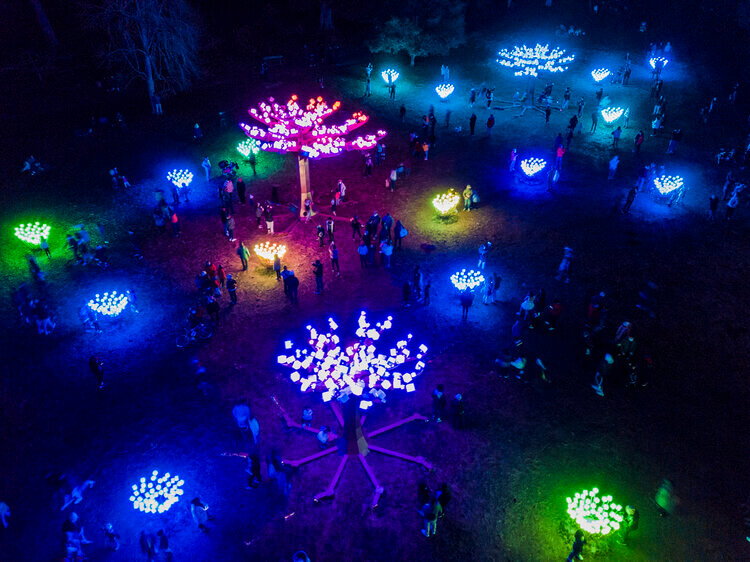 Situated in Golden Gate Park’s Peacock Meadow, Gadeken’s trees range in height from 12 to 20 feet, with their glowing canopies stretching as wide as 30 feet. The trunks and roots were constructed from steel plates using a combination of CNC-cut and hand-rolled strips to generate both organic and boxy shapes. He included both four and eight-inch plastic cubes for the tops, each with 16-channel programmable LED lights, allowing “millions of colors [to] move through the trees’ leaves in hypnotic waves,” according to the artist. 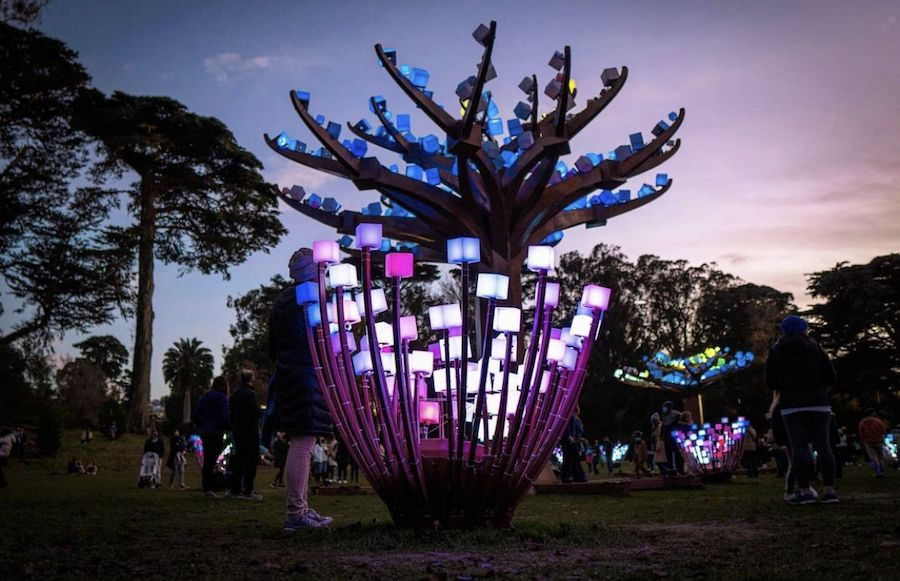 While new to Golden Gate Park, Gadeken has showcased a five-tree version of Entwined in several venues since 2017, including Las Vegas’ Electric Daisy Carnival and the Toronto Light Festival. In years past it was intended to be more hands-on, with visitors encouraged to climb around on the roots and have “a direct physical interaction with the piece of art.”

Due to the pandemic, however, this latest installation is a socially-distanced affair, spread out over an acre of land with more looking and less touching involved. 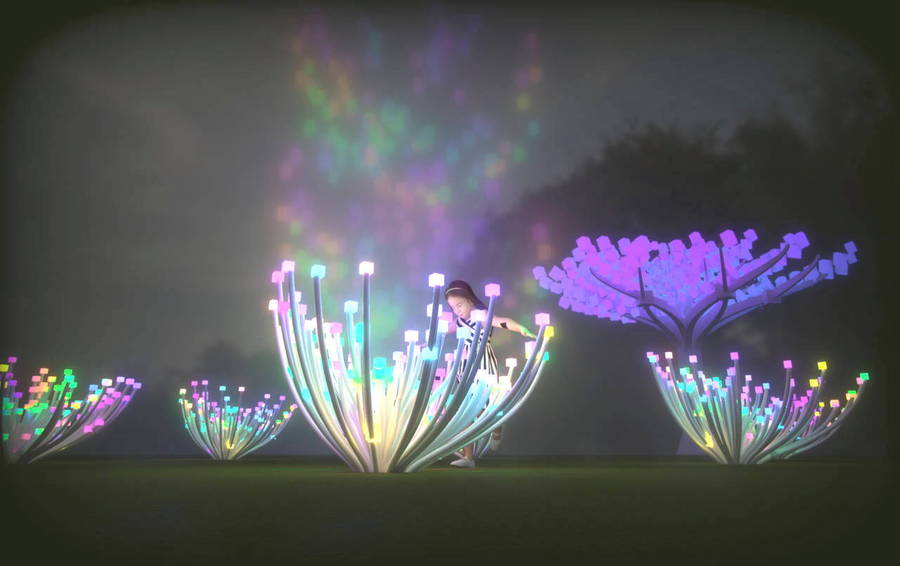 As an artist, Gadeken has been producing copper, bronze, and steel pieces in the San Francisco Bay Area for over 25 years. Inspired by the objects, structures, and processes in the world around him, he says his work “depicts natural objects in fantastic ways and realizes the potential for serendipity in everyday life.” He also hopes to “instill a sense of play into the environment.”

Gadeken uses his imaginative inventions to encourage others to be creative as well. From 2019 to 2020, he was an adjunct lecturer at Stanford University in the Electrical Engineering Department, where he taught his students about kinetic light art sculptures. 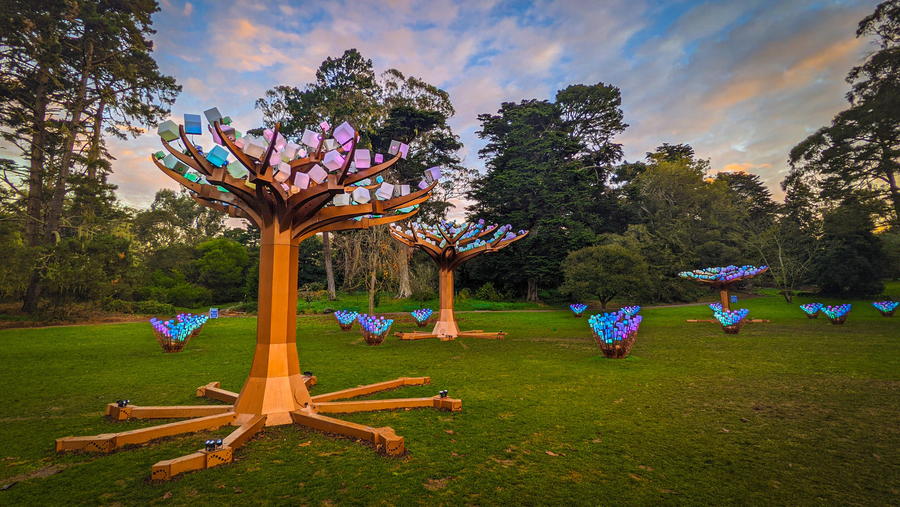 The lights of “Entwined” come on from 4 to 10 pm daily. Although originally slated to run through February 28th, the exhibit’s popularity has yielded it an extension through Sunday, April 4th.