Though this year’s Burning Man festival was canceled due to the coronavirus pandemic (as was last year’s) and forced to go virtual, that didn’t stop the creative endeavors of those who wanted to celebrate. Enter the Renegade Man festival: an unofficial gathering of revelers looking to party in the Nevada desert. Though not a planned, scheduled event, Renegade still drew around 15,000 people, many with a mind to celebrate creativity through art and music. 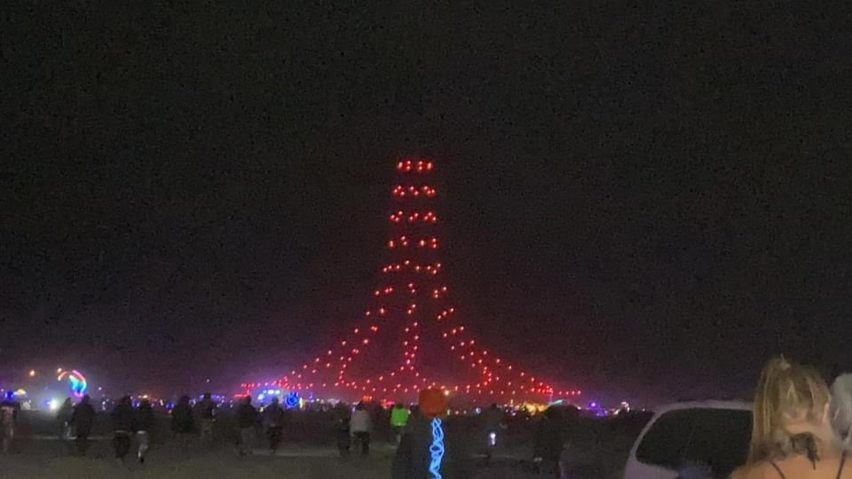 And Studio Drift was no exception. The Amsterdam-based art studio is well-known for its immersive installations that incorporate performance art, experiential sculptures, and kinetic, technical works that “[bring] people, space, and nature on to the same frequency.” The avant garde studio created three spectacular drone shows at the unofficial festival, specifically designed to bring the Burning Man experience to the masses.

Dubbed “Drone Stories,” the shape-shifting light installations formed a burning man, a flock of starlings, and a mirrored orb, all meant to “create meaningful performances to connect people” in the void created by Burning Man’s official cancellation. Each iteration consisted of hundreds of drones, brightly hued, shifting, and swirling above the heads of those gathered in the Black Rock Desert. 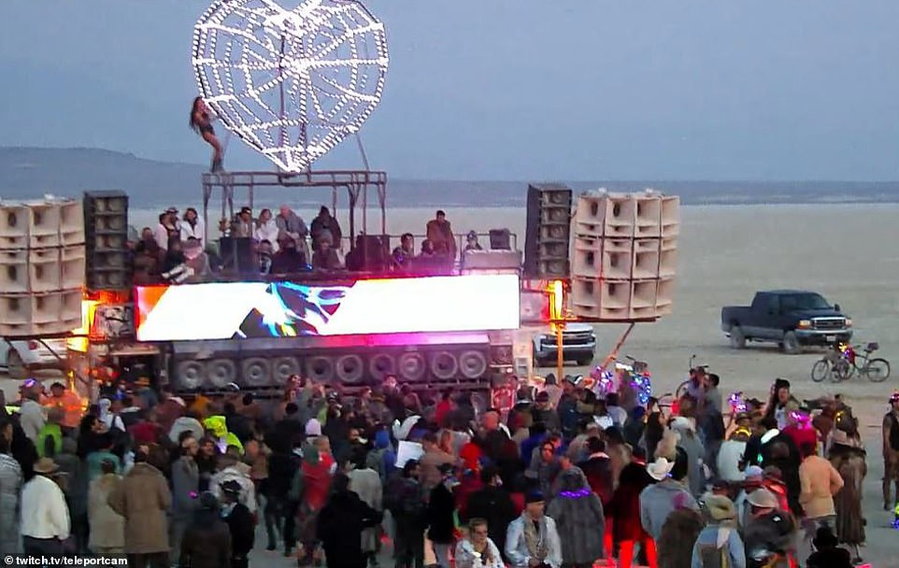 Ralph Nauta, the founder of Studio Drift, and Lucas van Oostrum, the founder of Drone Stories, wanted to remind the gathered crowd of past Burning Man festivals by creating “a collection of memories” with their assembled drones. The installations were carefully planned from start to finish, beginning with pen and paper sketches and ending with a translation to custom drone software — itself a complicated process that also required the designers to tinker with otherworldly concepts like speed, flight path, and light power. Indeed, the duo jumped at the opportunity to turn their ideas into living art. As they explained to Dezeen in a recent interview, “We are using this technology to create artistic expression, and we want to push the boundaries of what is possible.” 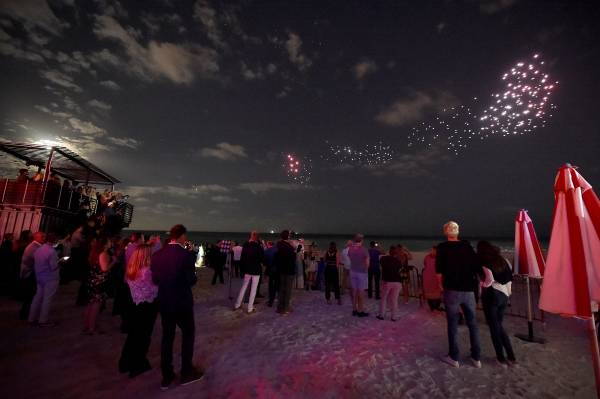 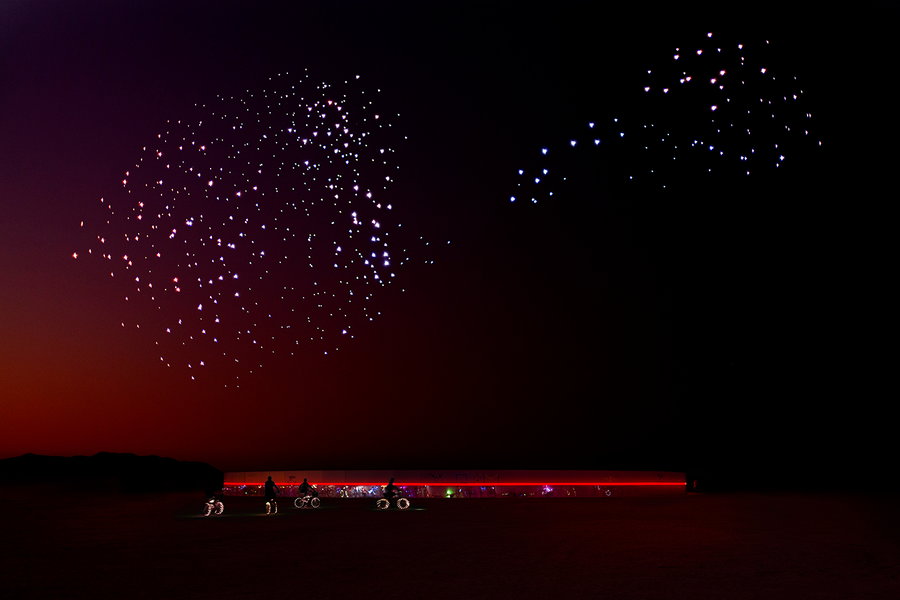 Each night of the festival brought a new design. Friday was “an homage to the artworks that have defined Burning Man,” including a nod to BIG’s Orb from the 2018 festival. Other formations included a flock of birds dubbed “Franchise Freedom,” which was first presented by the studio at Design Miami/. Pre-programmed by the designers, the “swarm algorithm” was eerily appropriate at Renegade Man, as it was meant to symbolize “the struggle of the individual towards the group…a fitting piece in COVID time,” according to Nauta and van Oostrum.

Dramatically, the birds then transformed into a single man, triumphantly raising his arms into the air, “ready to embrace [his] fellow humans.” The figure then poetically “burns” at the end, a nod to Burning Man’s annual tradition of ending the festival with a burning figure. 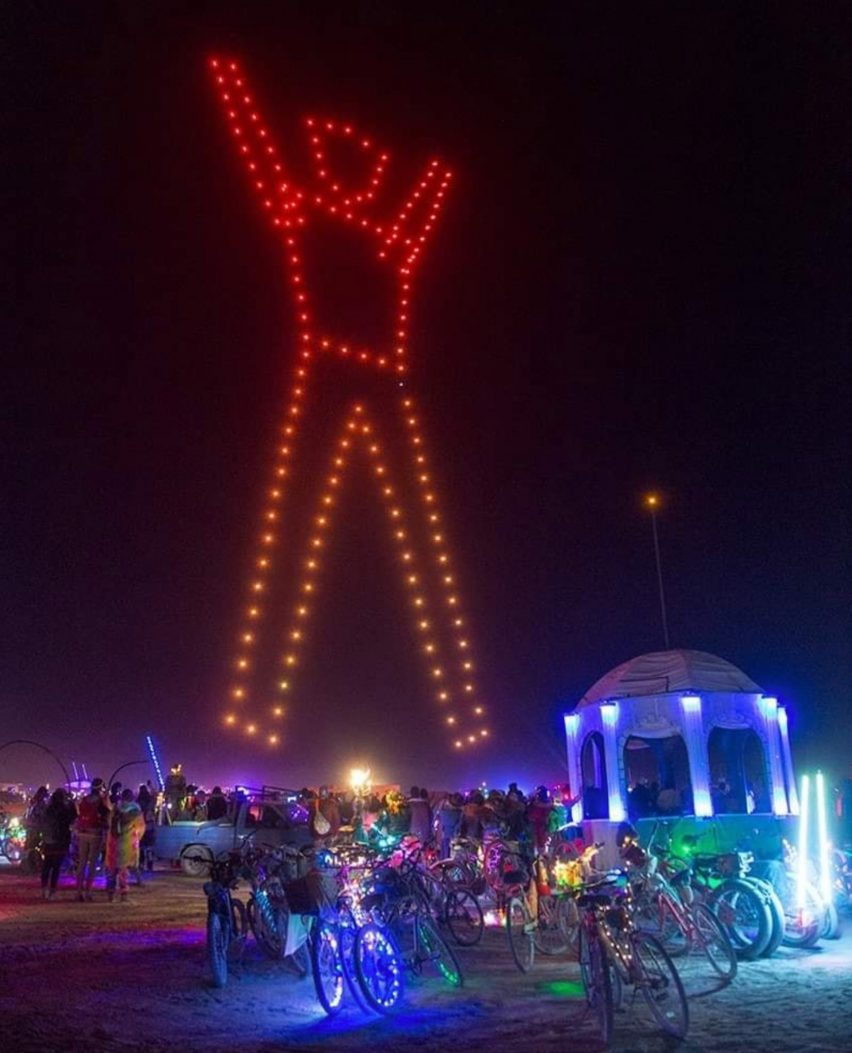 The spectacular drone installations were ultimately meant to fill an artistic void created by the cancelation of the popular Burning Man festival for the second year in a row. Though the festival has been presented virtually, many feel the virtual setting fails to represent the bonhomie and artistic connections that make Burning Man so attractive to creatives everywhere. Still, with their triumphant installations, Studio Drift managed to capture the essence of Burning Man at this year’s unofficial festival through their distinctive, technically savvy drones bursting with color — a perfect aerial representation of the festival’s contributions to art and creative expression.