Thirty years ago, the courtyard outside the Louvre Museum underwent a dramatic makeover with the addition of a controversial new pyramid designed by Pritzker Prize-winning Chinese-American architect I.M. Pei. At the time, many people protested that the modern look of the glass and steel structure clashed with the classic French Renaissance style of the museum, going so far as to call it “sacrilegious.” Today, it has come to be accepted as a landmark for the city in its own right, and it’s even hard to imagine the Louvre without it. 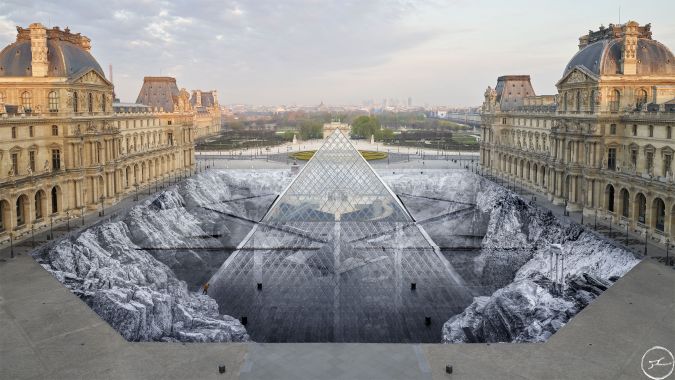 French street artist JR imagines a whole new origin story for the Louvre Pyramid in a magnificent new optical illusion, seemingly digging deep into the ground around it to reveal hidden depths. The temporary installation “excavates” the base of the structure, making it look as if passersby risk falling into a dark, dangerous hole if they get too close.

The illusion only comes together from a certain perspective. Anyone approaching it from the opposite side, or looking down at it from the windows of the museum, wouldn’t get the full effect. Consisting of 2,000 individual printed stickers, the installation is the artist’s largest work to date, measuring 17,000 square meters. It took four days for over 400 volunteers to assemble it like the pieces of a puzzle. 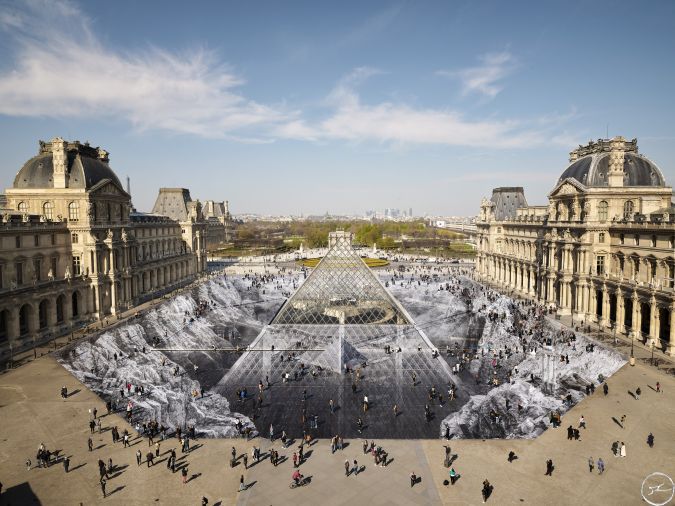 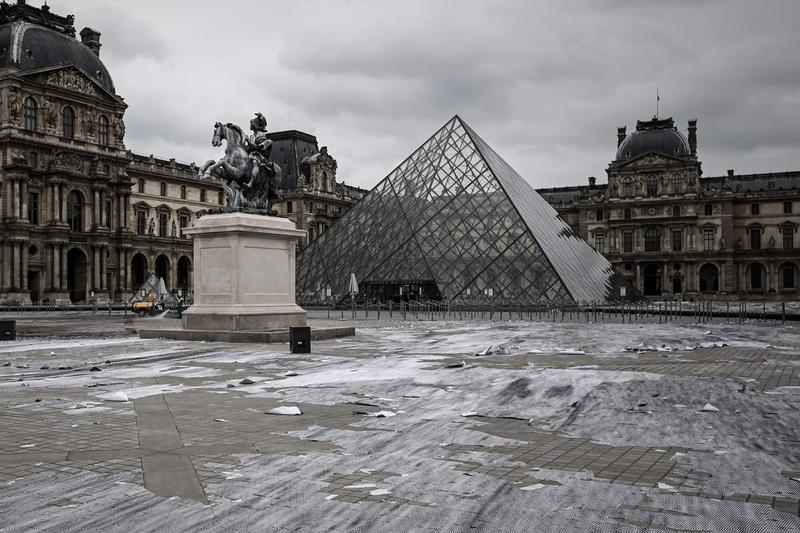 Completed to celebrate the pyramid’s 30th anniversary, the installation was unveiled on the morning of March 30th. Luckily for those of us who couldn’t be there, the work was photographed immediately. Within a matter of hours, it was totally destroyed. Some tourists intentionally tore up bits of the paper, while others accidentally took part in its destruction just by walking across it. But that was all part of the plan, according to JR.

“The images, like life, are ephemeral,” says the artist. “Once pasted, the art lives on its own. The sun dries the light glue and with every step, people tear pieces of the fragile paper. The process is all about participation of volunteers, visitors, and souvenir catchers. This project is also about presence and absence, about reality and memories, about impermanence.” 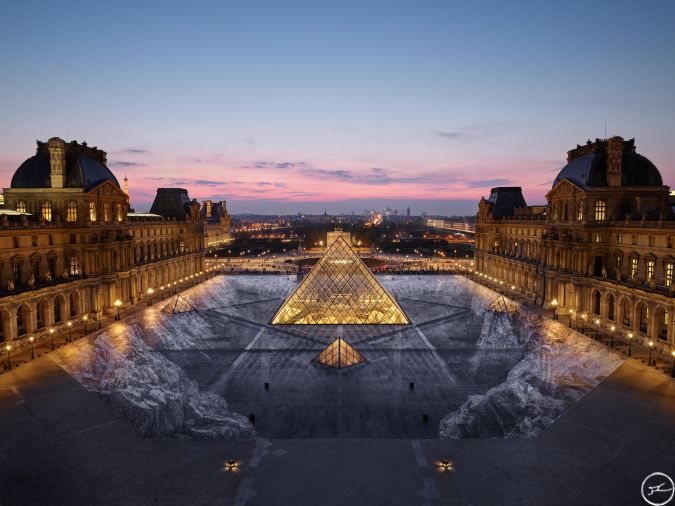 “What remains now is the memories of people from around the world who came to paste the piece…or to walk on it and tear it to make it disappear…merci à vous.”

This isn’t the first time JR has altered the famous pyramid, either. In 2016, he made it “disappear” by plastering it with a photographic mural of the Louvre museum facade, reminding us what the courtyard would look like if the pyramid had never been built. In fact, the artist is internationally celebrated for his large scale photographic murals, which often focus on marginalized populations and significant political issues, like the tension at the border between the United States and Mexico. 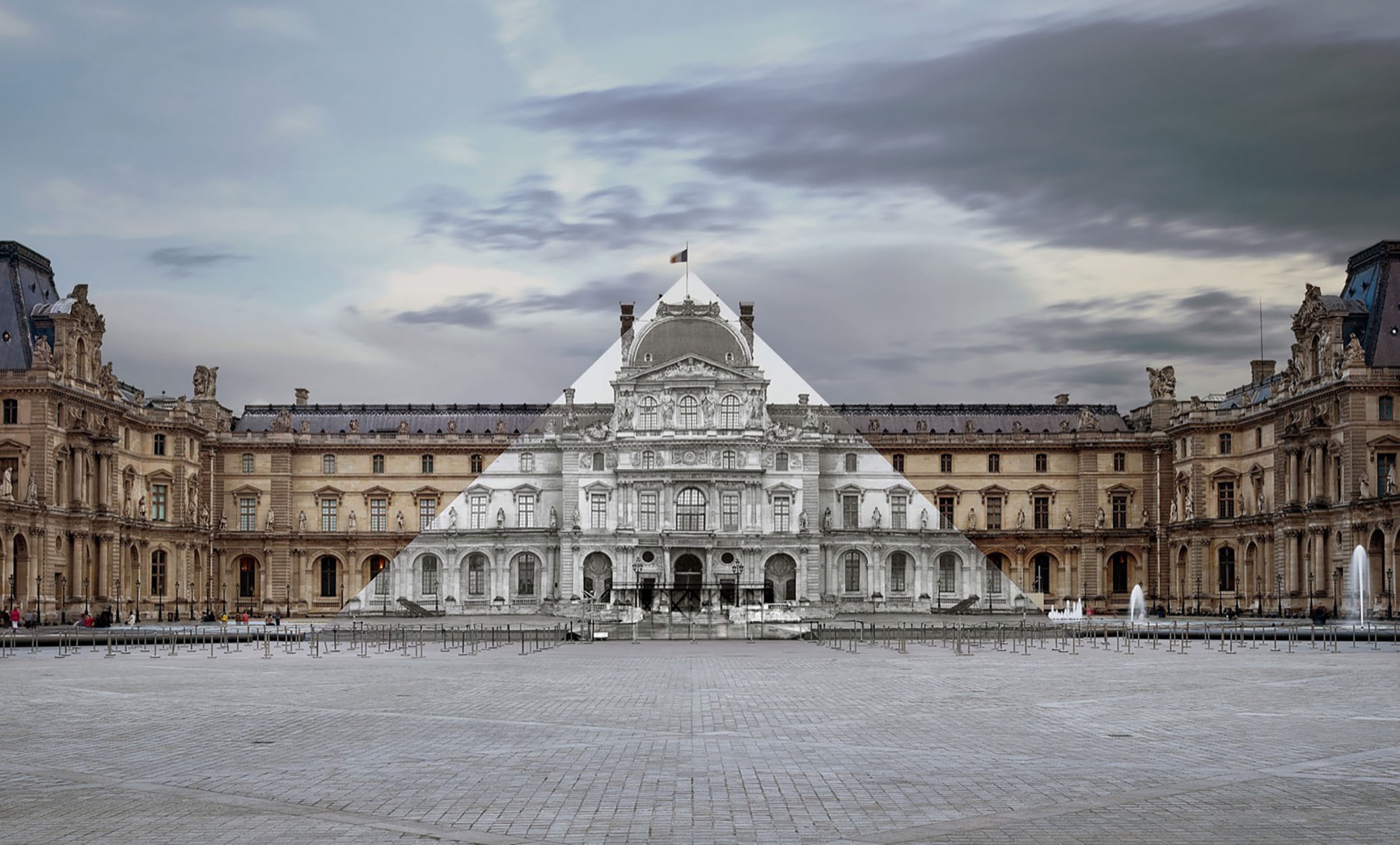 Given the recent news of the fire at the Notre Dame cathedral, another Parisian landmark, JR’s words about memories and impermanence feel especially poignant. The ephemerality of this installation should remind us all to take nothing for granted, enjoying the beauty around us while we still can.