The suburban oasis of Columbus, Indiana, is a little-known town outside the world of architecture, but within architectural circles, it’s a veritable behemoth of built glory. Dornob recently covered a new indie flick set in this small town, and now Columbus is making even more headlines in the design world for its “Exhibit Columbus” festival, which will run until November 26th. The American suburb has been overtaken by architectural and design gems, including 18 site-specific urban interventions in the form of large-scale installations, all of which react to and take inspiration from the architectural icons that Columbus is famous for. 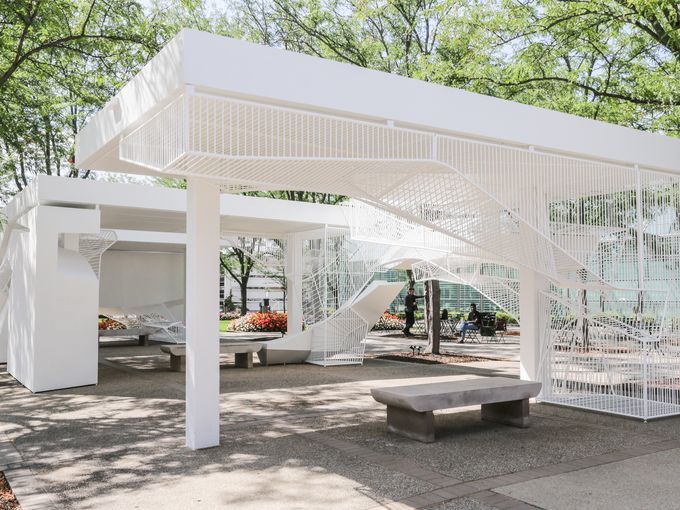 The festival consists of four main exhibitions: The Miller Prize Installations, the Washington Street Installations, the University Installations, and the High School Installation. The works featured in the Miller Prize Installations were decided by a competition, which received submissions from a number of firms and studios. In total, five winners were selected from all the entries. Among the winners is a stunning piece by IKD at the Cleo Rogers Memorial Library, entitled “Conversation Plinth.” The piece was inspired by the conversation pit in Columbus’ Miller House, which was formerly owned by the local patrons from whom the competition takes its name and is itself a hallmark of midcentury modern architecture. In their version, IKD encircled a sculpture by Henry Moore with a series of sliding timber discs, which afford different perspectives of the low-lying landscape and surrounding buildings. As a result of IKD’s project, spectators can now observe the sculpture and plaza in fresh ways. 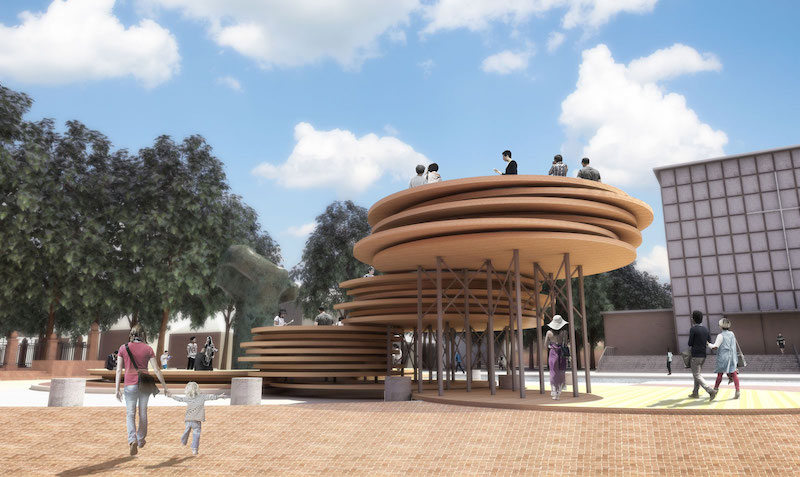 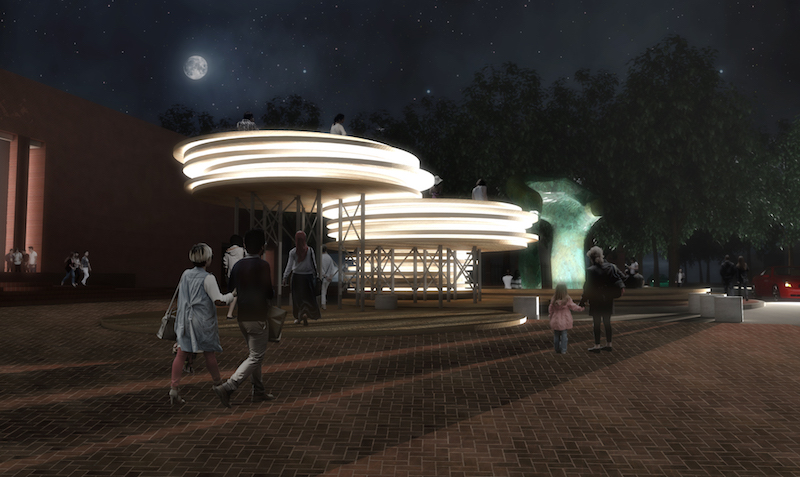 For the Washington Street Installations, five international galleries were charged with choosing a designer to install a piece along Columbus’ main thoroughfare, Washington Street. Snarkitecture’s “Playhouse” is a physical insertion between the flanks of two buildings. The white structure is reminiscent of a picket fence, with two linear benches lining each wall under a single pitched roof. The house’s scale, materiality, and color disrupt the town’s urban rhythm and provide residents with a place for contemplation and conversation. 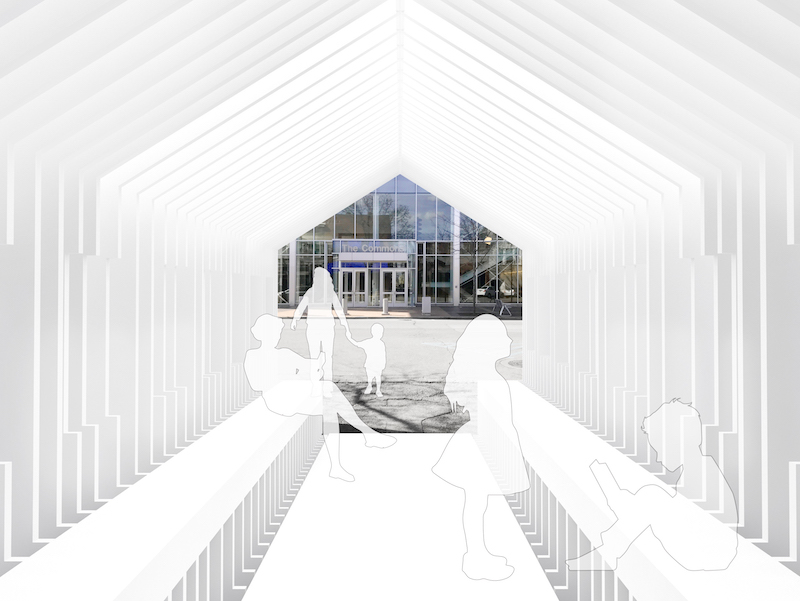 The University Installations called on midwestern architecture schools to submit proposals. “Indelible Pattern(s),” a project submitted by the University of Kentucky, aims to foster a relationship with Columbus’ history by imbuing itself with a sense of place within the surrounding landscape, using contemporary materials to bring a structure into the modern era. 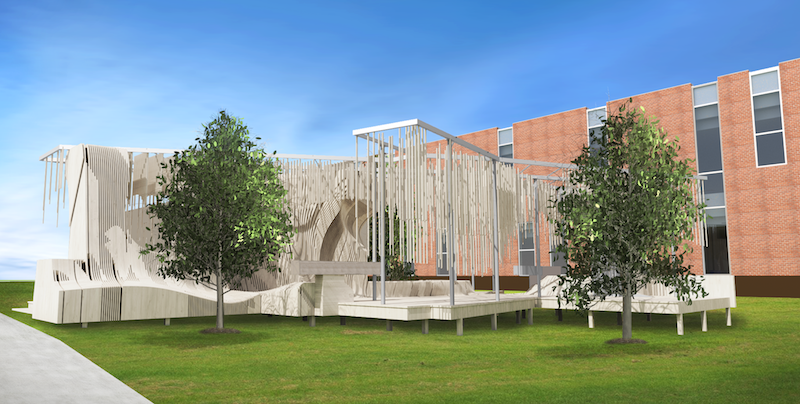 Finally, the High School Installation is a site-specific piece located at the Historic Post Office and executed by students from local high schools in collaboration with design mentors from universities and professional practices. The installation, entitled “Between the Threads,” is made of up steel frames adorned with colorful threads of plastic string and is intended to be playful and inviting. 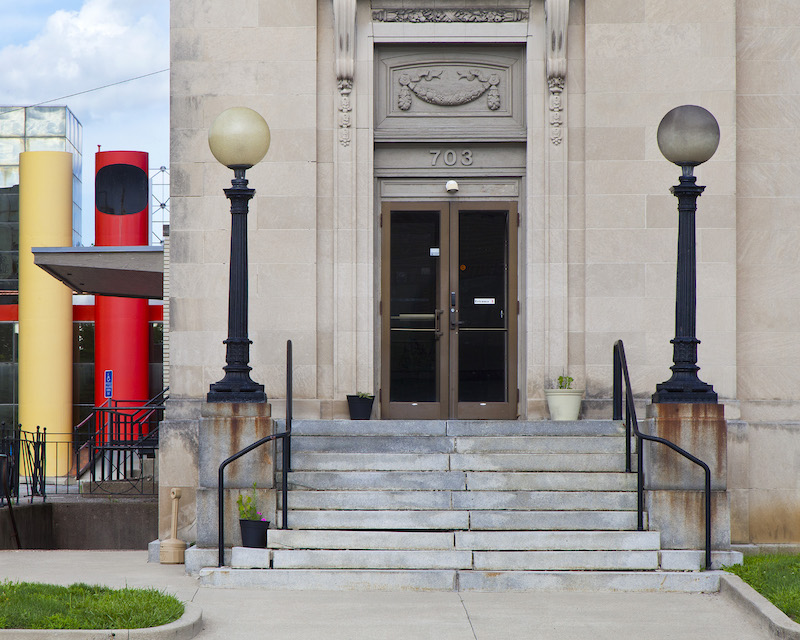 Continue reading below
Our Featured Videos
Exhibit Columbus bills itself as “an annual exploration of architecture, art, design, and community.” The festival’s installations are intended to showcase the intersection of different modern design concepts within the setting of an incredible architectural haven like Columbus. The site-specific interventions reinterpret the existing structures and add another layer to this already fascinating middle-American town. Be sure to visit the festival’s website for more information about how to plan your visit to this incredible celebration of architecture, art, and design.