NEXT Architects has transformed the feel of an old rural town with “Holland Dafang Creative Village,” a regeneration project in Dafang, Jiangxi Province, China. The firm, which has headquarters in both Amsterdam and Beijing, was tasked by the local government with the job of preserving the old, deteriorating structures while adding new attractions that can help the community “adapt to newness.”

Much of this area’s artifacts from the Ming (1368 – 1644) and Qing (1644 to 1912) dynasties have already been lost due to neglect, and as China’s burgeoning economy encourages more rural residents to move to cities, hundreds of thousands of villages are being abandoned and put at risk of demolition. Dafang is just one of 102 abandoned villages in Jiangxi Province alone.

“Many of these have dozens of generations of social, cultural, and monumental value but are currently lacking major future significance,” explain the architects. These days, continued relevance requires a consistent flow of both visitors and cash. So NEXT teamed up with the IVEM Dutch Institute for Heritage and Marketing, Smartland landscape design, Total Design graphic design, and a team of artists to create a new masterplan that would attract both to Dafang. 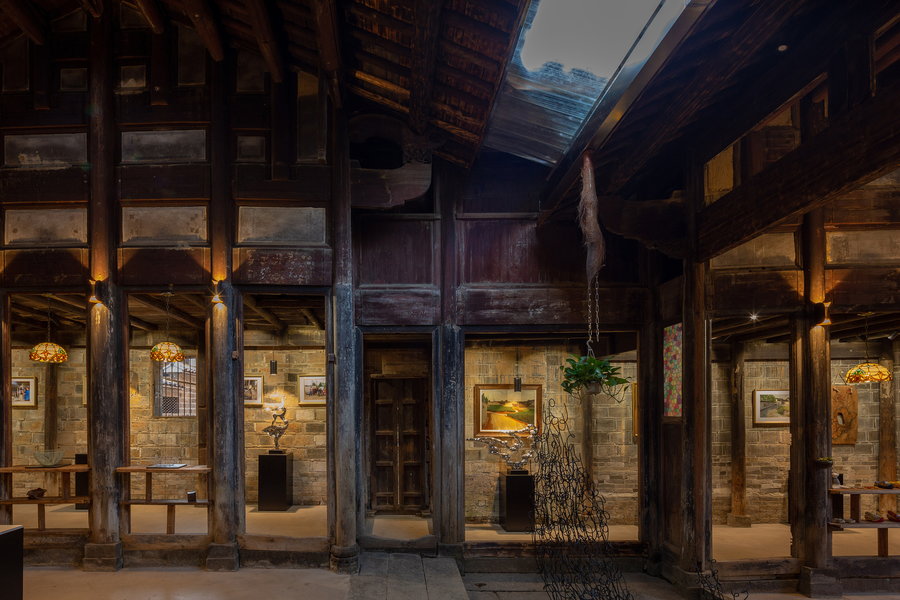 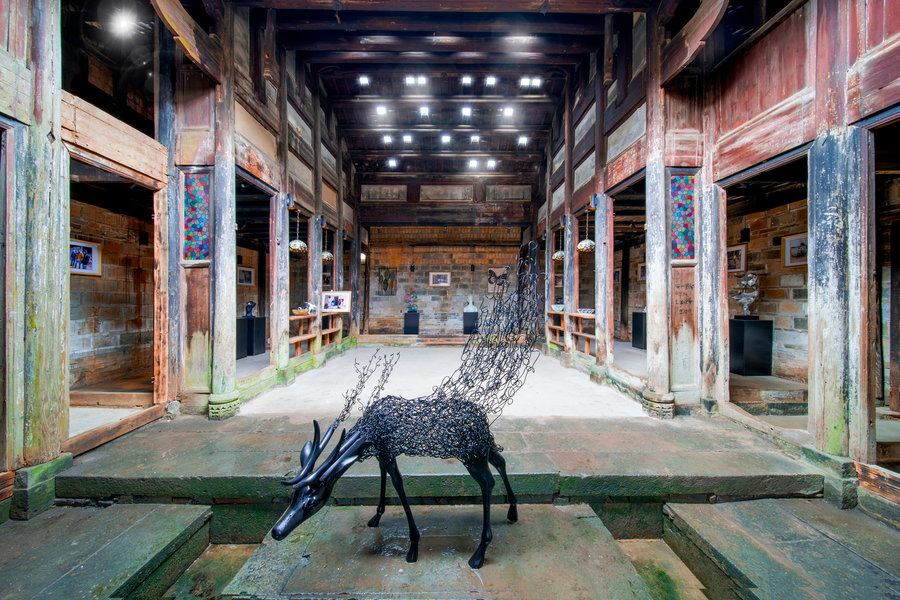 Observers may wonder — and rightfully so — why the Jiangxi government would “wish for Dutchness to revitalize Dafang,” especially if interest in the area is primarily rooted in its cultural significance. After all, colonization and its damaging effects on cultures parasitized by outsiders should be well known at this point.

In this case, the two cultures have been bridged since the 17th century, when the Dutch East India Company sailed to China to obtain Chinese porcelain. Chinese arts and traditions ultimately had a huge influence on Delftware, the ceramics Holland is famous for producing (the Dutch East India Company, by the way, is remembered today for being a precursor to modern corporate monopolies, and for its affinity for exploitation, violence, and slavery).

Dutch and Chinese architects alike worked on Holland Dafang Creative Village, which has been transformed into an interactive environment for artists from both countries to work, mingle, and exhibit. 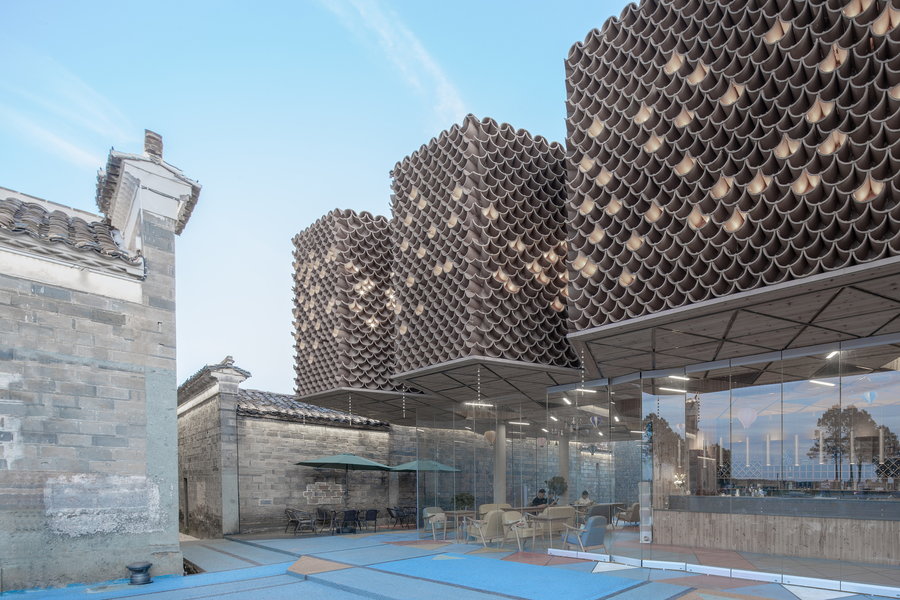 A description of the project on Archello explains that “interventions are designed on three levels. Firstly, urban space, architecture, and landscape are restored where possible, with new materials creating a dialogue between old and new elements. For example: glass roof tiles are used to restore the roofs of the old houses, and the ancient irrigation system has been restored [by] adding elements such as a natural helophyte filter to clean the water. Secondly, a watchtower and public hall have been added: new building structures that take cues from on-site precedents.”

“Ancient villages in this area all had watchtowers for defense purposes. With the original tower long gone, a new watchtower has been designed in which two intertwining routes embrace each-other, loosely resembling a giant Chinese ‘dragon column.’ The watchtower provides alternating views over old and new in the village, as well as views as far as over the rural landscape towards the mountains at the horizon. Locally, the watchtower is embraced as the ‘Wandering Tower,’ reminiscing a poem of the famous Chinese poet Li Bai about people waiting for loved ones to return to their hometowns.” 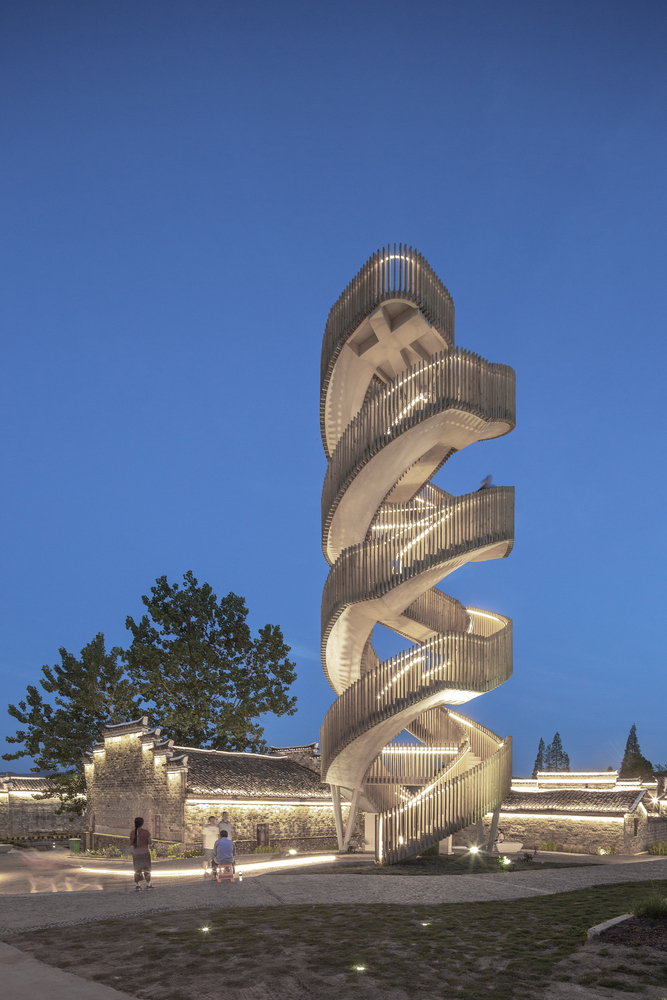 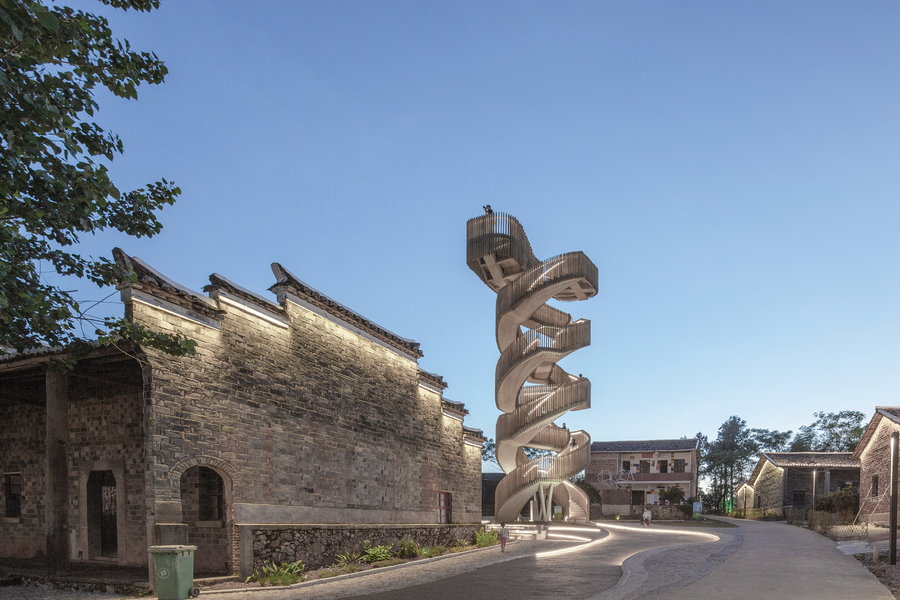 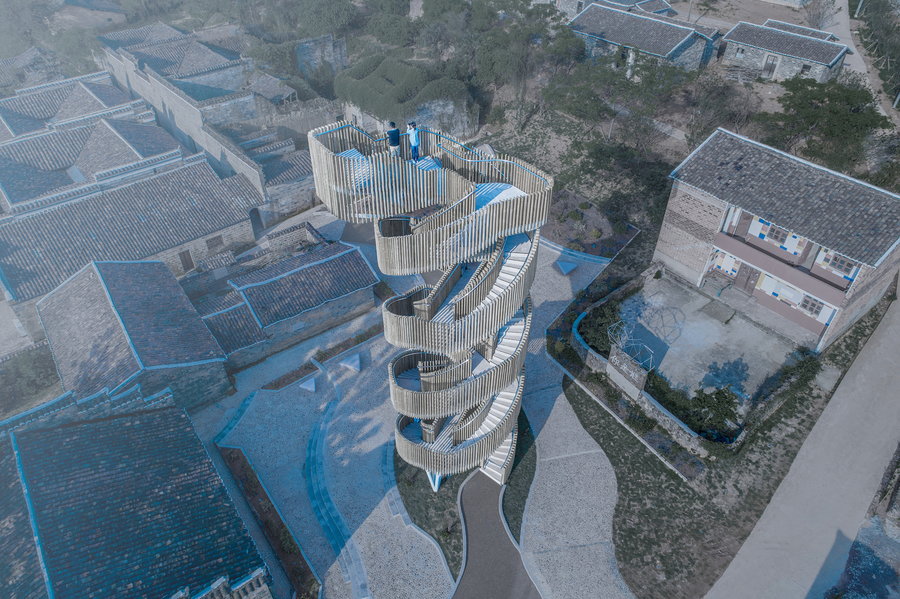 “In the center of the village, a new public hall is realized. The hall is built on the former site of a courtyard building that was destroyed during the cultural revolution. The inspiration and shape for the unique roof comes from a century-old camphor tree outside the village, whose lofty canopy for decades provided a gathering space for the villagers. The camphor hall dissolves in the fabric of the village and provides a shaded collective space. The terracotta tiled facade provides places for birds to build nests.”

A new village museum, artist studios, and a library round out the attractions built around the existing town, and visiting artists are highly encouraged to participate in the ongoing transformation. Cultural ties are illustrated by features like the floor of the public hall, which was painted in a Mondrian-like pattern by a Chinese artist. 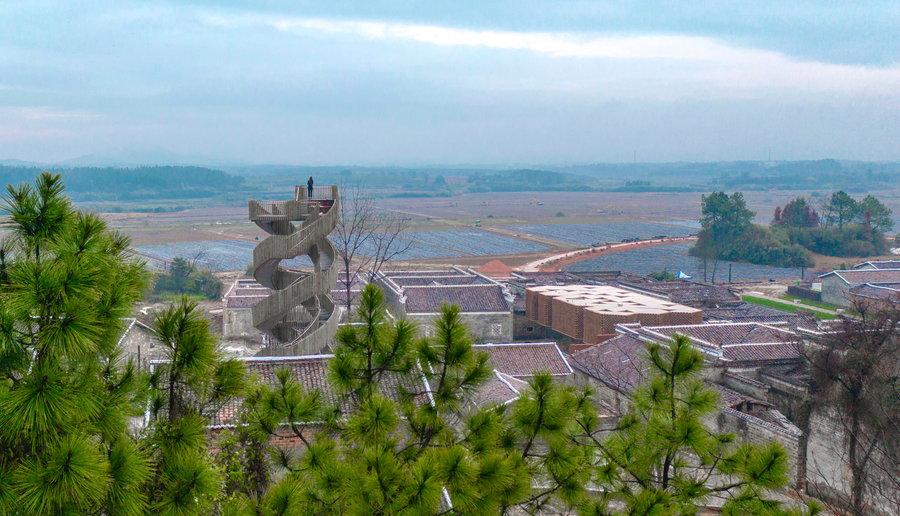 The result is undeniably beautiful, with the new additions augmenting and highlighting the older structures instead of dominating them. In particular, the spiral watchtower looking over the ancient village lends a futuristic effect to the overall scene, contributing to a narrative about the village’s continuing growth and history.