The newly designed Long Story Short Hostel in Olomouc, Czech Republic has obliterated those heathen stereotypes surrounding city hostels and sent a wave rippling through the millennial travel scene. Enticing every instagrammer and travel blogger to indulge in their artistic and minimalistic abodes, the architects behind this glorious build aim to change the perception of Europe’s usually dismal-looking low-end accommodations. 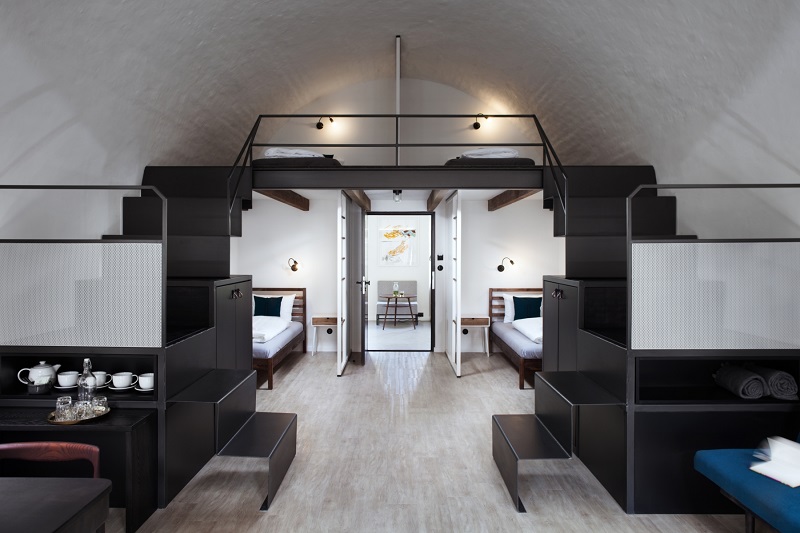 The Long Story Short is comparable, and in some circumstances even preferable, to a 4-star hotel, featuring an onsite café and fully equipped dormitories and double bedrooms. Taking up the whole first floor of a 17th-century fortress known as Podkova, the hostel inherits a rich history (which also makes for an attractive backstory). Podkova translates to “horseshoe” — a word that references the “U” shape of the structure. 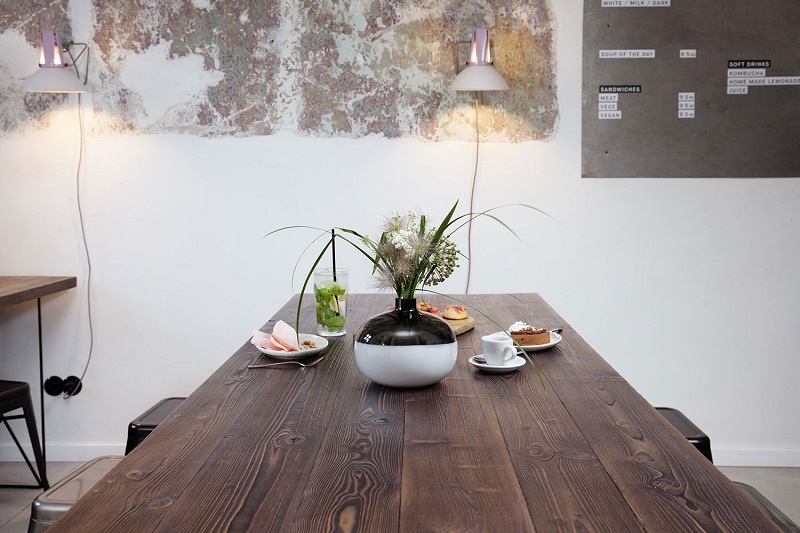 Initiated by Eva Dlablova and designed by Denisa Strmiskova, the hostel was created from scratch and opened just two years after its first ideation. Strmiskova kept the majority of the space pure white in order to create a clean and calm environment accentuated by soft pastel palettes and black details.

What Are Its Features?

The majority of the rooms feature custom-made furniture: lamps, beds, mirrors, shelving, and bathroom appliances are all made to measure by local artisans, including Master & Master and RAV Slezák. Berker provided the Bakelite switches whilst the lamps came from Marset. The hostel’s interior lighting was done by Bulb and Ewerel, its many artworks created by local artist David Minarik, and its overall identity developed by graphic designer Jan Košátko. Košátko wanted to fuse the building’s original history with a modernist twist, so he used raw materials like stone, wood, and metal against softer textiles like those of the vintage furniture pieces. In order to create the desired ambiance for the rooms, the designers played with the lighting until it emitted just the right vibe. 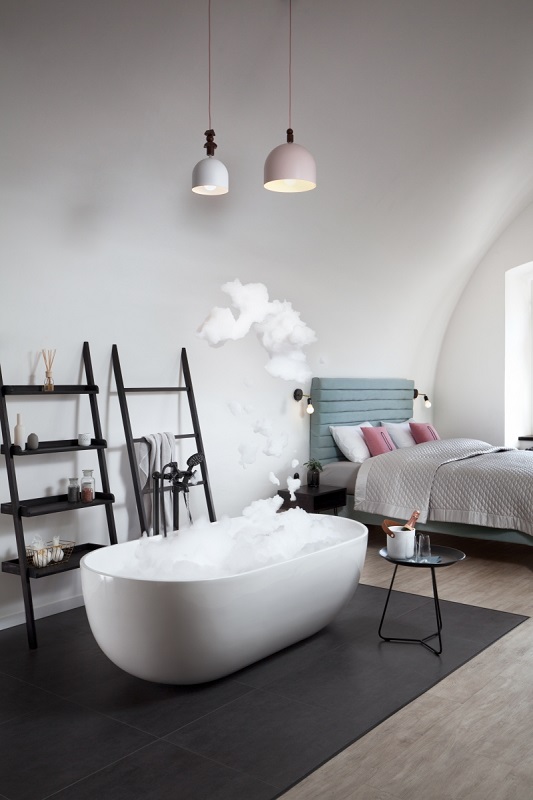 With a total of 56 beds across an array of different-sized rooms including dorms, private lodgings, and even a wedding suite, the Long Story Short offers options for every sleeping preference. As previously mentioned, there is a café situated at the heart of the building, which also acts as a reception and common area. Plans are already in place for the current hostel to be expanded, a project that would include the addition of common areas like an outside terrace with a kitchen island and cocktail bar under a pergola, and eventually, a restaurant.

How Can I Book a Room? 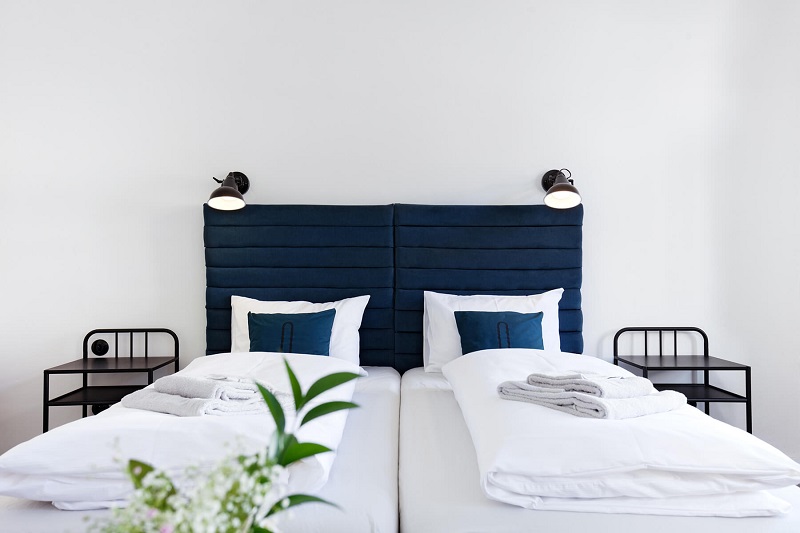 Unbelievably, stays at the Long Story Short begin at just $16 per night, and bookings can be made directly through the hostel’s website. The following are currently available to book: “The Big One,” “Private Rooms,” “Girls Choice,” and Mixed Dorms.

“The Big One” boasts a deluxe king-sized bed, a fancy freestanding bathtub, heated floors, a wet room, complimentary bath bombs, a hairdryer, a private bathroom, an extra bed, a minibar, and a 55-inch Smart TV — perfect for a cozy weekend getaway for couples and anyone else who wants to escape the crazy world for a little while! 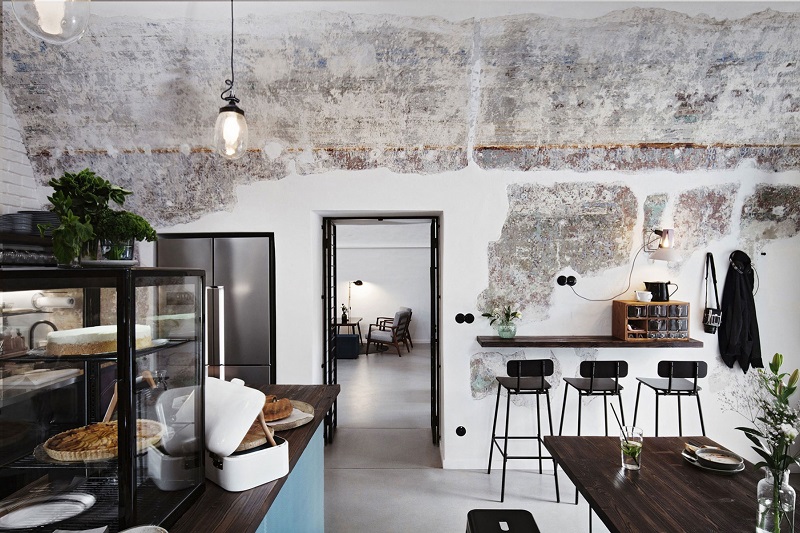 The “Private Rooms” are available in three layouts: the “Nook,” the “Arc,” and the “Duo,” all named after their aesthetic features. The Nook separates the bedroom from the rest of the unit, while the Arc simply has the bed area encircled by an indentation in the wall. The Duo allows two people to sleep in the bed and has a pull-out sofa bed, which can sleep two more in case you have guests!

Don’t waste your money on a 14-bed hostel dorm where you’ll be sleeping among cockroaches and limescale — begin your adventure with Long Story Short.