Everyone has their own idea of the perfect home, but not many envision it the same way as Wayne Adams and Catherine King, who’ve spent 28 years building and living on a floating island off the coast of Vancouver Island, British Columbia. 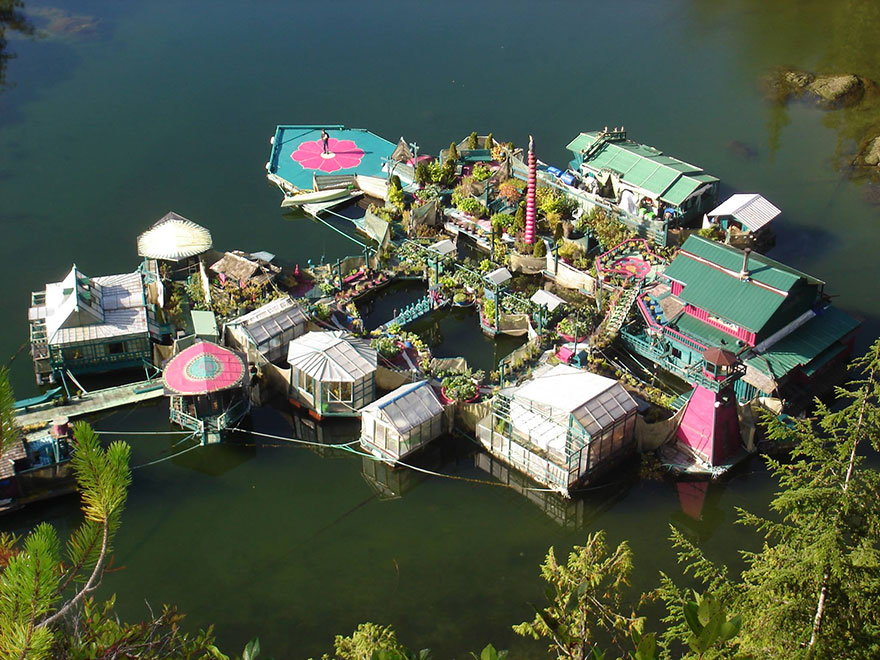 The project began as a simple idea, as all do, but when a storm in 1992 deposited a load of lumber in front of the couple’s cabin and the original owner didn’t seem to want it back, they saw it as a sign to begin construction immediately. Ditching the power tools in favor of an old-fashioned handsaw and hammer, the first floating platform took shape.

“Wayne started building the house on the beach at that cabin, and it was about three months later that it was done enough that we could move into it, and we towed it over to the cove,” explains Catherine. 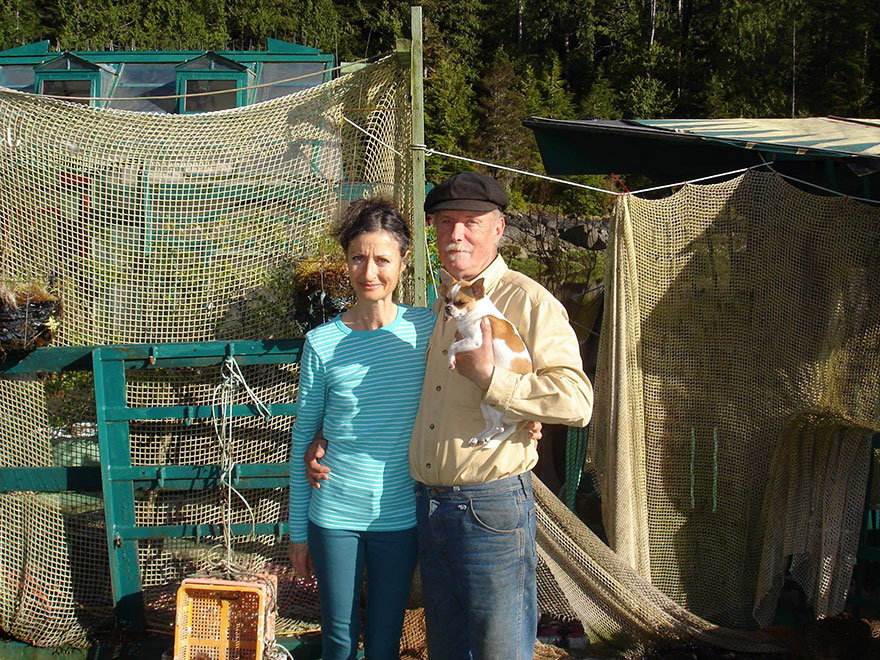 Over the years, they’ve raised two daughters on the island and added new sections to the base as their needs changed and they were able to procure more materials. Today, the island is made up of 12 separate floating platforms that support several greenhouses, an art gallery, a dance floor, a studio where the couple lives, and a guest lighthouse. All of this is painted in bright shades of teal and hot pink. At some point the campus was dubbed “Freedom Cove,” and it’s since gone on to garner all kinds of international attention as an example of unique off-grid living.

The platforms are anchored to shore with thick ropes, of course, but other than that, they’re basically free-floating. The couple admits that there are many challenges to maintaining such a home, and that it’s really more of a lifestyle. Winter storms endanger the crops and structure itself, so it seems there are always repairs to be made. Pests are another issue. Apparently trying to raise chickens on the island didn’t work out too well, as they only attracted other wildlife. 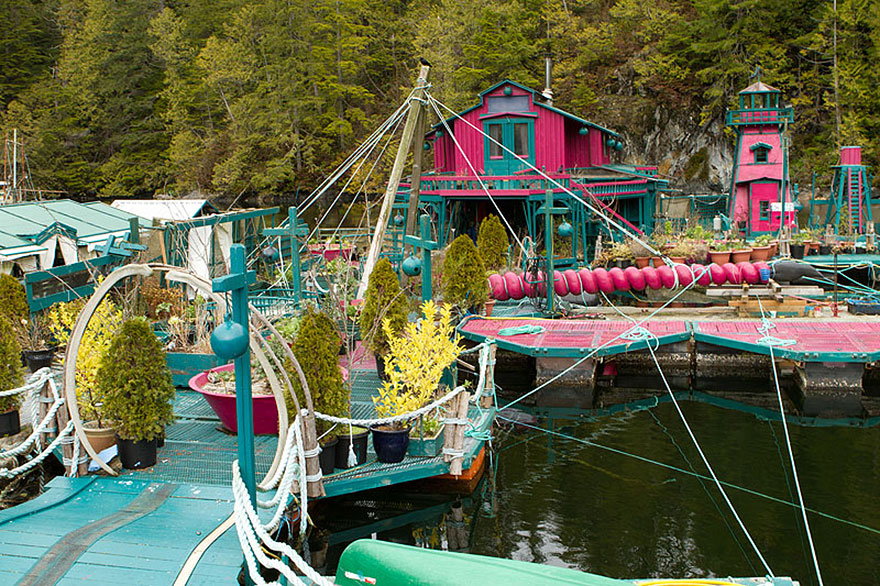 Still, their lifestyle is heavily, although not entirely, sustainable, with the couple growing the majority of their own food right outside the front door. Occupying a half-acre of land mass in total, the island actually offers ample space to grow food, but the irony is in the water. Even though the couple is literally floating around in the stuff, fresh water for the platforms must either be collected from a nearby waterfall or captured when it rains.

Living off-grid means making adjustments. To conserve power, for instance, Wayne and Catherine decided to go without a freezer or refrigerator. But hey, at least this decision makes eating fresh an easy one. The remaining power for the home was previously generated by 14 solar panels, but once they started malfunctioning, the couple decided to switch to a generator as their primary power source.

“We also do lots of composting,” adds Catherines. “As a result, we always eat food that’s fresh and seasonal.” 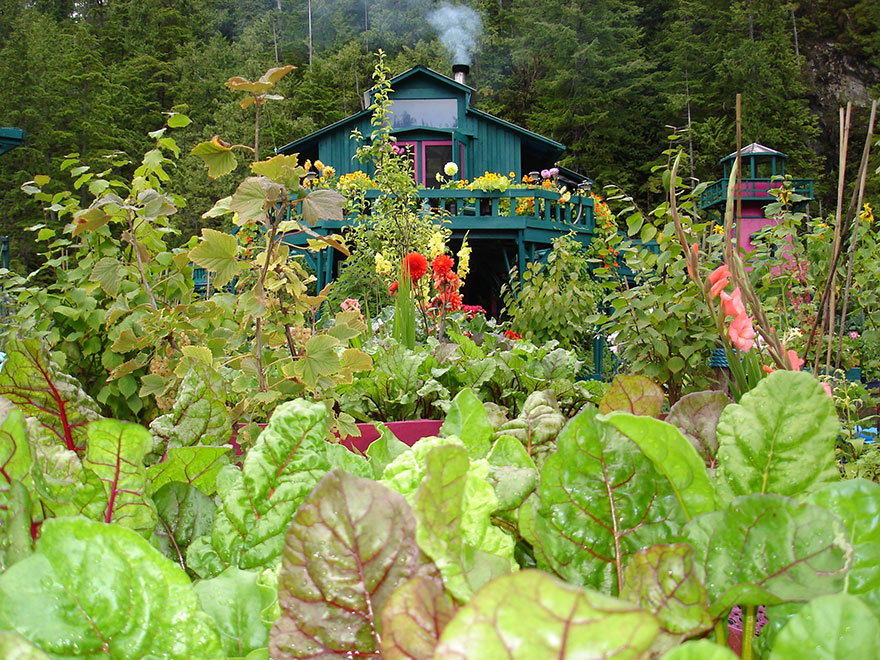 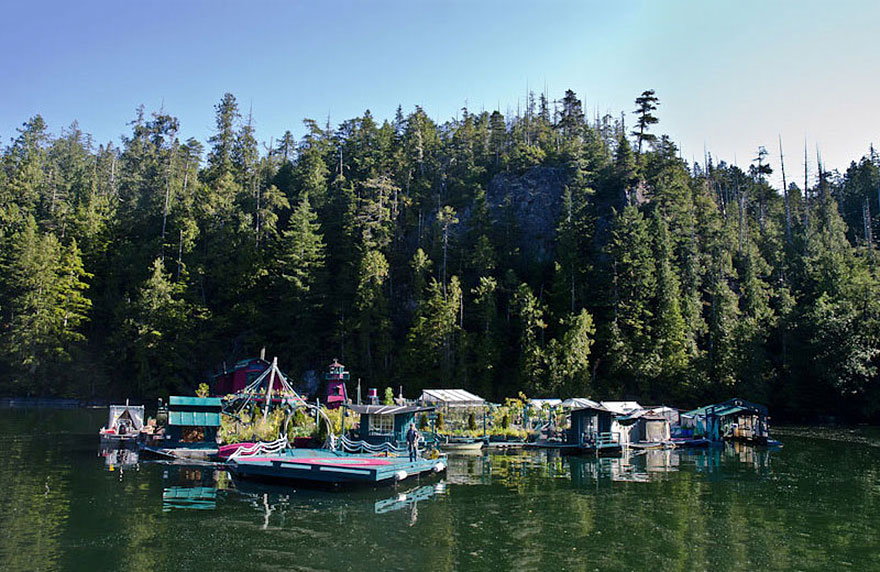 When considering their lifestyle as artists who spend their spare time composing music, writing, carving, painting, and dancing, it’s easy to see why sustainability was also important to them.

“We wanted to live close to nature because as artists that’s what inspires us. That’s why we decided to build this floating home. It works ecologically, in order to limit as much as possible its impact on the environment,” says Catherine.

The garden section is made from mostly recycled materials. As wood rots, salvaged steel from fishing farms replaces it. Another example of this is the large piece of plexiglass here, which came from a torn-down hockey rink and now allows views through an “ocean lookout” to the frolicking marine life below.

Although the couple is off-grid, they do go into town every few weeks to stock up on goods they can’t grow or catch themselves. However, they stress that minimizing packaging is a priority in maintaining their nearly zero-waste lifestyle. For money, the two sell their art to local businesses and offer tours of their home. Although “Freedom Cove” has been the nearly-perfect home for Wayne and Catherine, it’s not for everyone — especially now that floating homes are no longer allowed in the area.

“It’s been our intention to share with people what we do and inspire people to follow their own dreams and live life the way they want to,” Catherine says.