A sculptural crossroads unveiled in Sydney, Australia last month highlights the region’s railway past while pushing the boundaries between form and function. 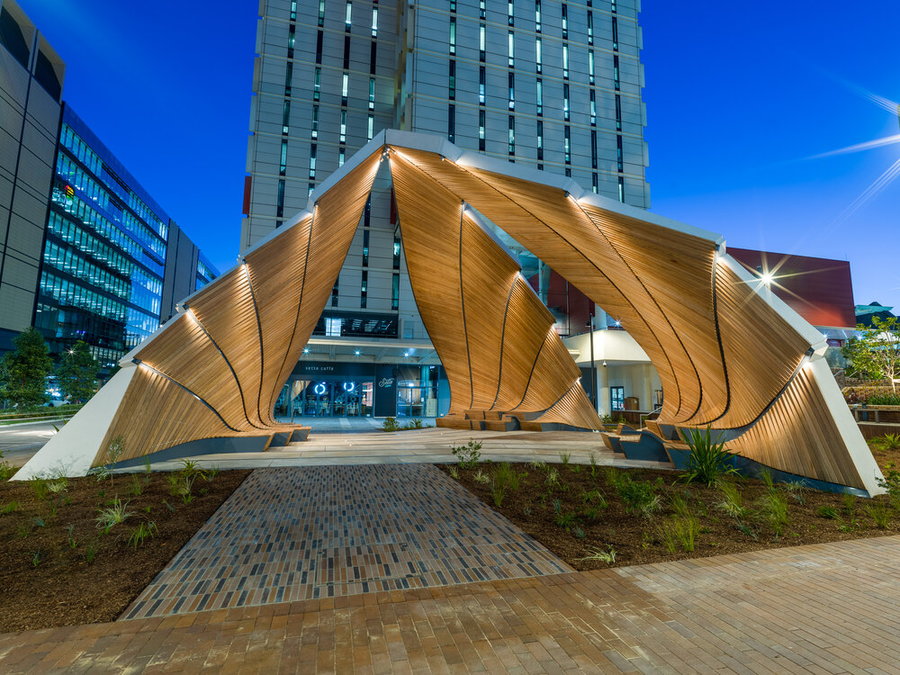 Studio Founder and Director Mark Fox took his inspiration from the meeting of these many paths. He says the art is “an idea of convergence: of track convergence, of journeys’ convergence, of stories. The project really started with a concept around the rail switch, [it] being a potentiality of moving from one track to another.” 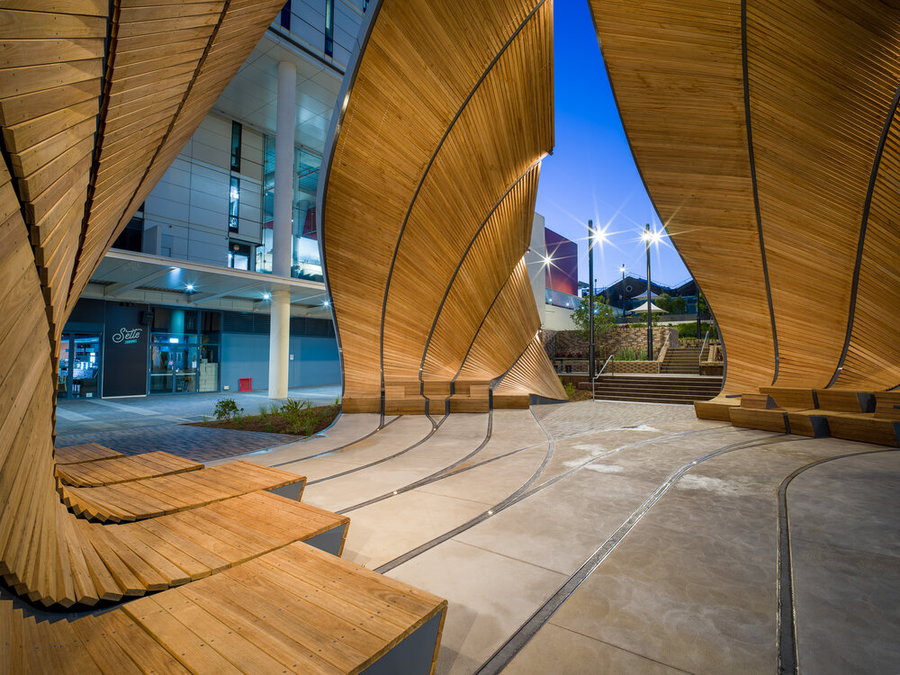 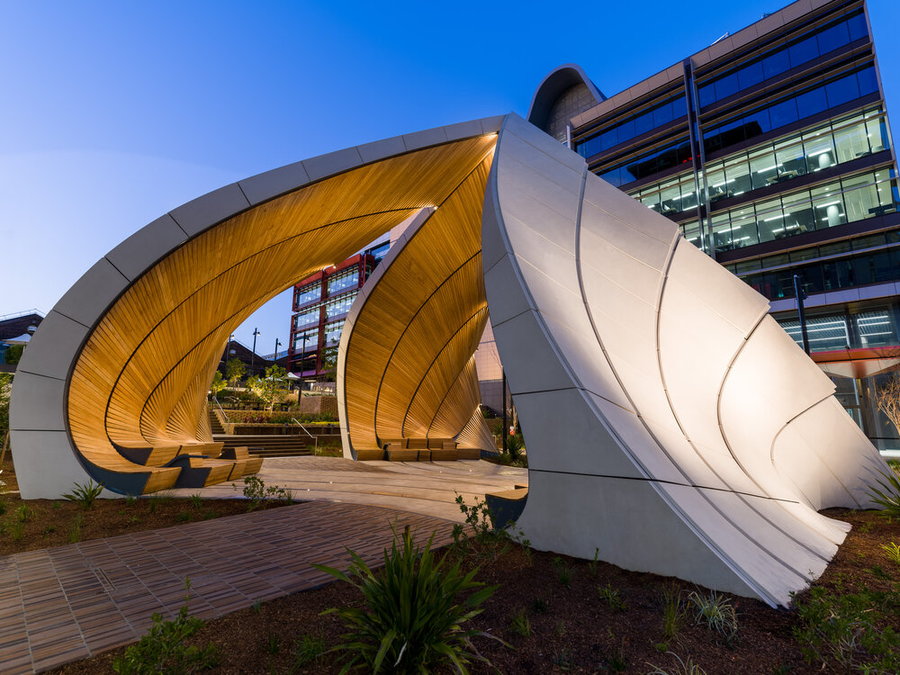 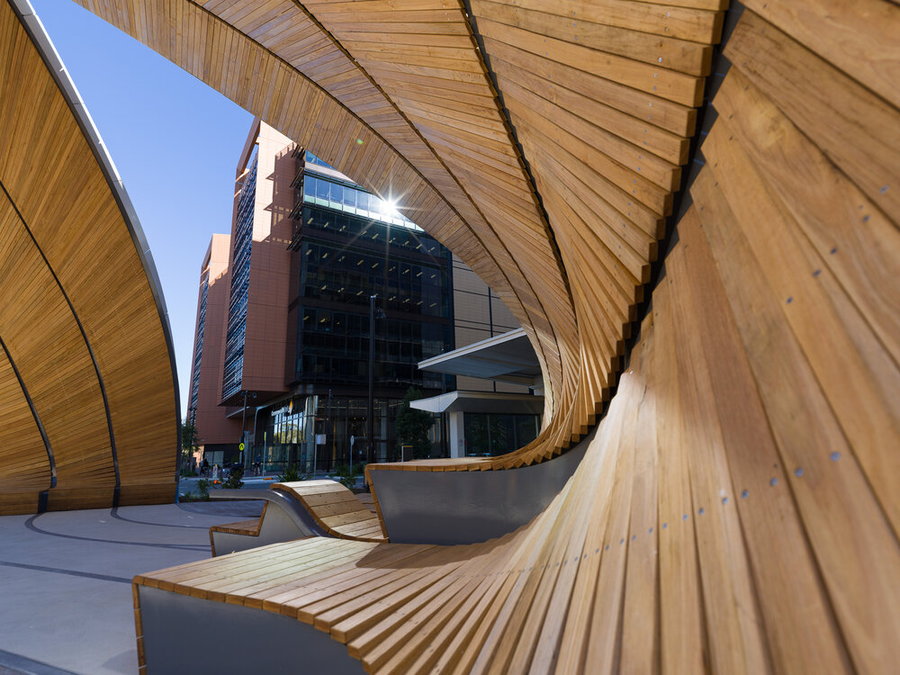 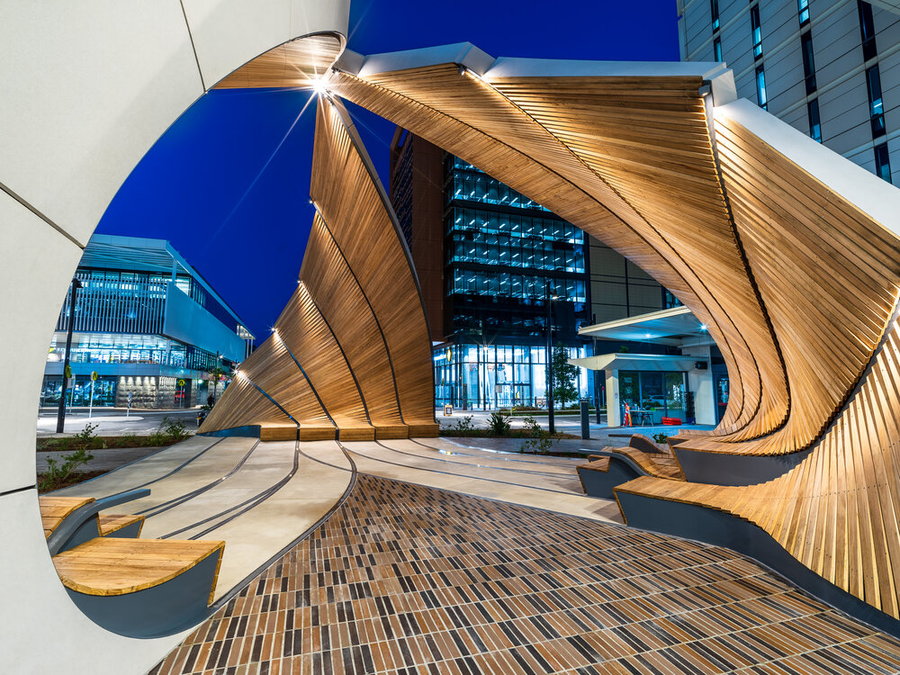 The pavilion is an “interchanging, diverging, and then coming together again” of wood, metal, and concrete that arcs upward in curved, geometric waves. Along the ground, steel bars mimic train tracks that overlap and spread out toward the sky before angling back to touch each other once more at the zenith. The ends of the wooden railway platforms feature artistic but practical benches where passersby can rest while being subliminally asked to contemplate how their own path in life junctions with others all around them.

None of those wooden planks were individually curved or bent anywhere along the arcs, creating an extra challenge for the design studio to “divide up something that is twisting in such a flamboyant way but to…position the timber exactly where it needs to sit so we get a continuous flowing form,” says Fox.

The shape of the sculpture was vital to its aesthetic, according to Fox. “Interchange Pavilion” lies in a courtyard between multiple high-rise office buildings and needed to be geometrically beautiful from every sight line, even from above. The 1,100-square-foot installation incorporates 15 tons of glass reinforced concrete (GRC), 1,400 pieces of Australian hardwood, and 820 feet of stainless-steel ground rails, all supported in a 1,650-piece aluminum structure weighing over 14 tons. 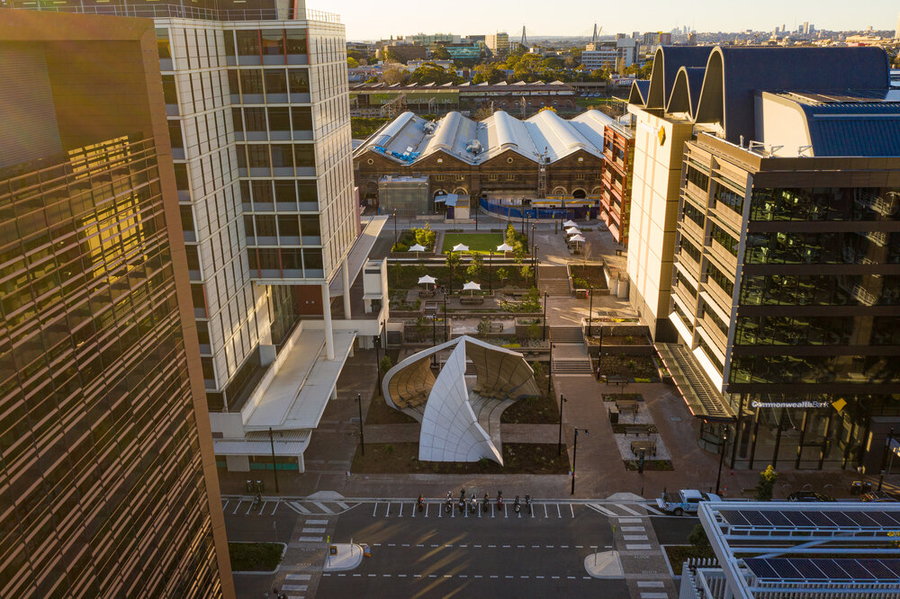 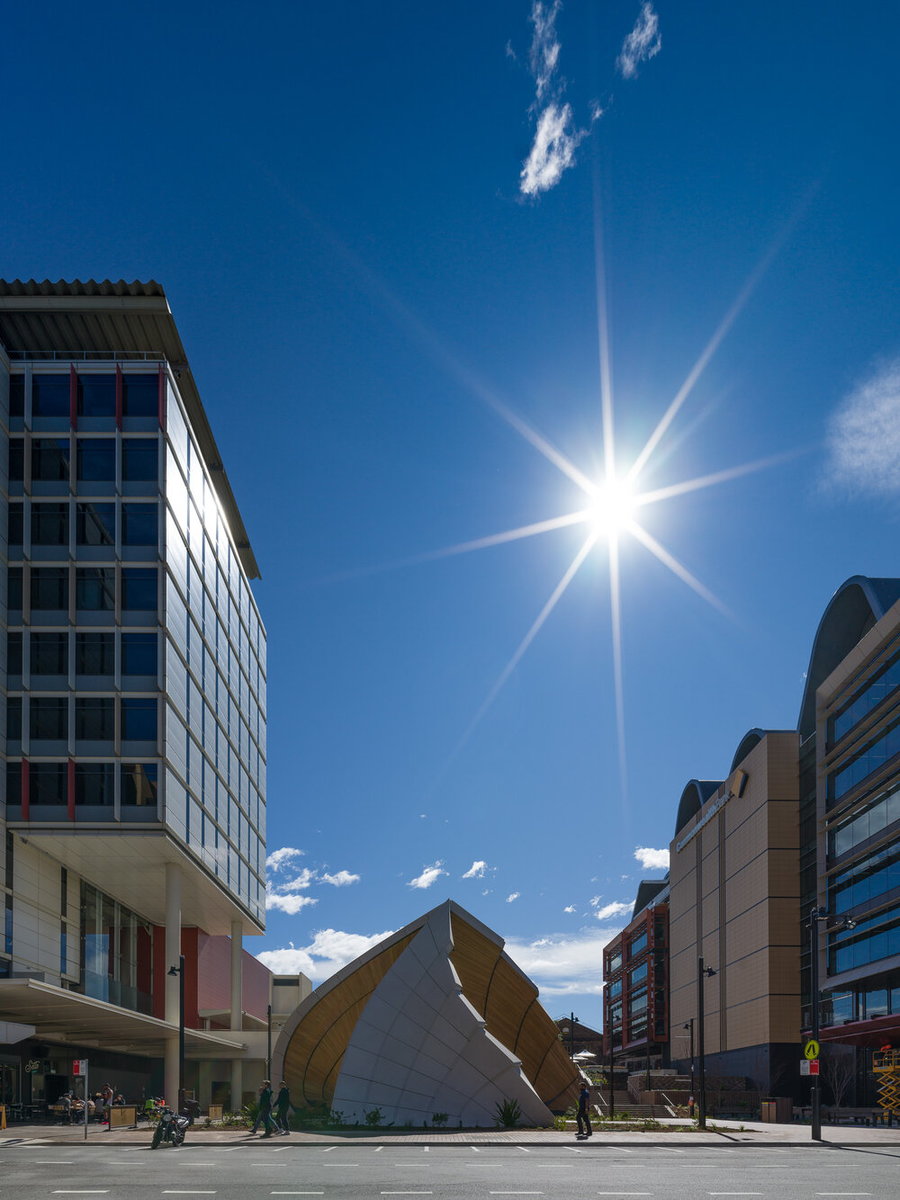 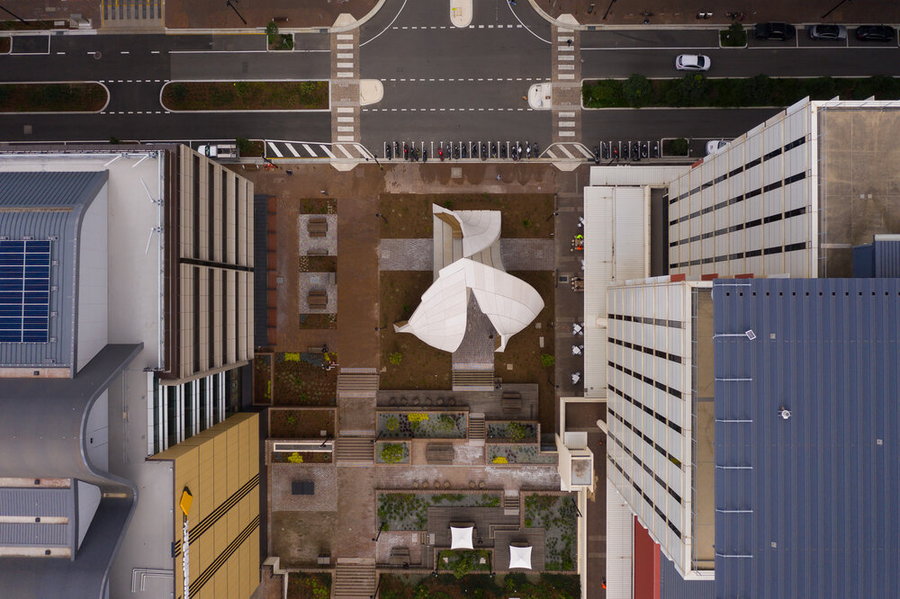 Fox and his team used cutting-edge technology in all aspects of the concept. The wood was sliced by computer-controlled cutting machines, the GRC molds were twisted by robotic axis mills, and the aluminum was digitally fabricated. He notes that “Interchange Pavilion design and building technologies are pushed to their limits to build what might have been an unbuildable form in another era.”

The undertaking was commissioned by Australian property group Mirvac and curated by cultural center Carriageworks as part of a larger public art initiative in the South Everleigh community. The aim is to “engage with the rich histories of Eveleigh and Redfern [train station] and create distinctive contemporary urban Sydney experiences.” Previous participants have created red gum slab abstractions inside an office complex, a smiling rain cloud on a building façade, and even a city park treehouse. 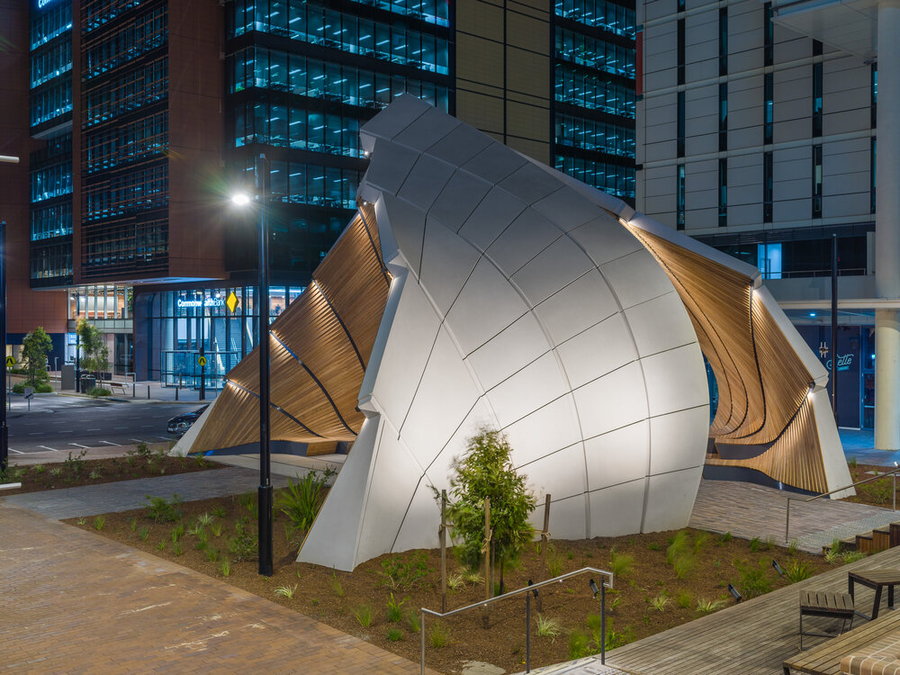 Fox, a senior lecturer in Art Processes and Architecture at the University of Sydney, is also well-known for his 2017 “Interloop” work, which fashioned the historic wooden escalator steps of Wynyard Station into an undulating coil on the ceiling over the modern moving stairways. He was intrigued by the mission of the Interchange Pavilion project, however, to meld art with architecture. “That challenge of combining something that is solely about form mixed with something that has to be a functional requirement, was really quite exciting,” he reveals, adding that “it is a connection to geometry, which then in turn ideally [leads] to transmission of ideas around the previous stories, previous histories of the site.”