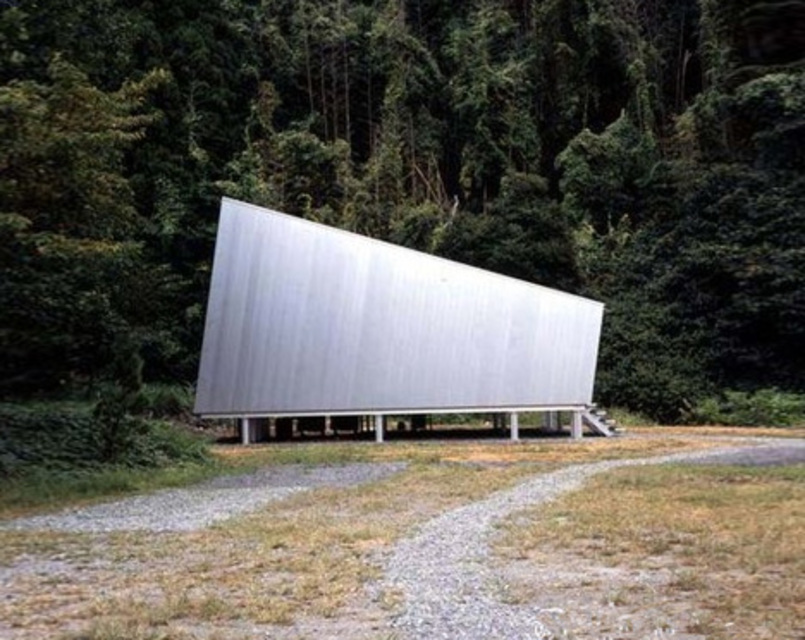 Japanese architect Toyo Ito is known for grand decorative gestures and sweeping organic shapes, which makes this small prefab cabin design both fitting and unusual. It’s a study in contradictions, all in one compact form. On the one hand, it certainly stands out… but, on the other hand, it is quite simple and geometric. 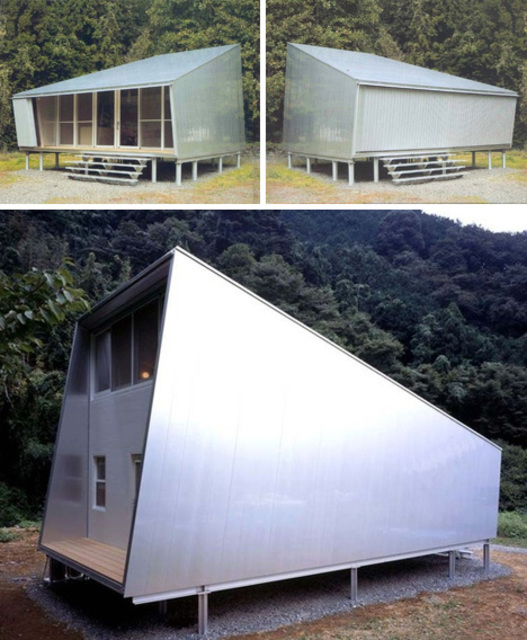 A closer look, however, reveals much of Toyo Ito’s architectural approach unfolding in slightly different ways that are a bit more subtle than (but perhaps still as ingenious as) his signature-style design moves.

While his larger-scale projects often have natural-looking elements to offset their rectilinear shapes, a similar contrast is achieved through the juxtaposition of bright metal exterior cladding and wooden-themed interior.

The initial ‘design gesture’ of the folded-looking shell takes on other layers of function, providing a sun-and-rain overhang shielding the front entryway (by jutting out above) while creating a porch platform out back (via the inverse cantilever out the rear). The entire structure is set up on stilts, making it partially flood-proof but also foundation-independent and thus more mobile.

Though the outside might look a bit more futuristic than average, the inside maintains a bit of a traditional Japanese feel. The details give it a feel that’s not too different from a classic cabin – a single main story for living and dining, with a partial loft space for sleeping above.

After all, as a modular prefab, keeping materials, proportions and scales relatively simple is the key to making them fast, cheap and efficient.

Ultimately, the structure feels like an evolution of the classic cabin for a new, more sustainable world concerned with keeping construction impact to a minimum and reclaiming structures at the end of their useful lives. Since this cabin is so easy to move, it’s also adaptable, making it more efficient than a structure that’s fixed in one place.