A white coffin emblazoned with American flags and the words “USA Freedom Box” appeared on top of former President Donald Trump’s star on the Hollywood Walk of Fame in Los Angeles on October 7th. A British-born anonymous artist known as Plastic Jesus took credit for the installation on Instagram, sharing images and a video with the caption “Today’s street installation: The USA Freedom Box – my body my choice. All the freedom you will ever need!” 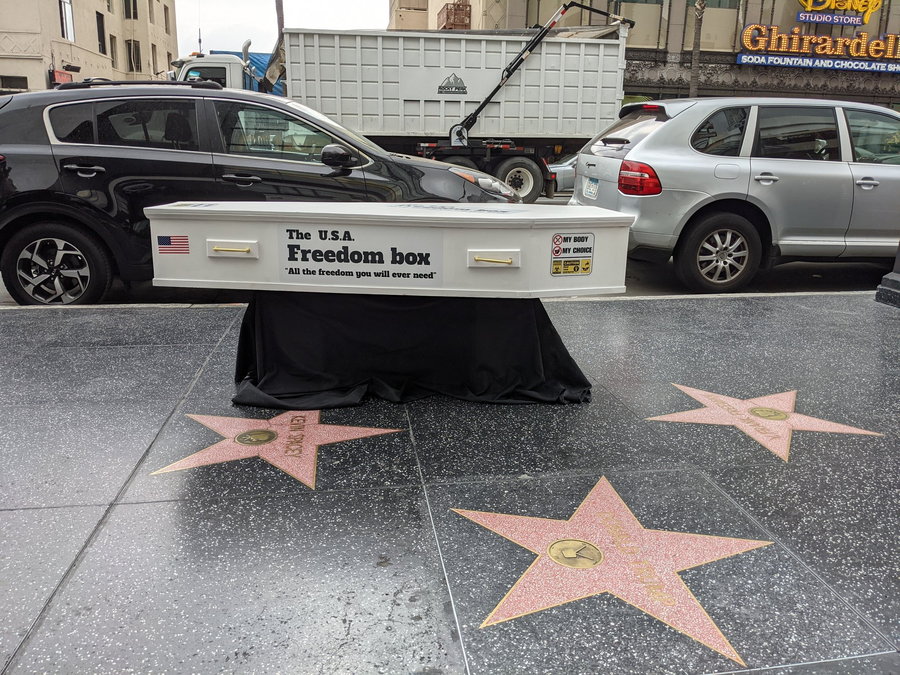 Critics of the work have pointed out that Trump was booed at an Alabama rally for urging the crowd to get vaccinated. Trump said at the rally, “You know what? I believe totally in your freedoms. I do. You’ve got to do what you have to do. But I recommend, take the vaccines. I did it. It’s good. Take the vaccines.”

However, as Plastic Jesus notes, Trump’s anti-mask rhetoric, anti-lockdown messages like writing “LIBERATE MICHIGAN!” on Twitter, and lack of urgent action early in the pandemic have likely contributed to large numbers of preventable deaths from COVID-19. Trump supporters who looked to the former President for pandemic guidance in 2020 weren’t exactly encouraged to protect themselves and others from the virus, especially as he downplayed the severity of COVID throughout the final year of his presidency.

The coffin installation “was really kind of a blow at the people saying vaccines and masks are impeding their freedoms,” the artist said in an interview posted on Twitter. “I wanted to do something because the anti-mask, anti-vaccine, anti-science mob has become so vocal. Once you’re dead and you’re in a coffin, you don’t have any worries about losing freedoms.”

This isn’t the first time Plastic Jesus has used Trump’s Hollywood star to make a statement. One installation encircled the star with a miniature six-inch-tall border wall complete with tiny American flags, razor wire, “KEEP OUT” signs, and graffiti. Another, in September 2018, covered it with a section of black steel bars. The star had been replaced just a couple months earlier after it was destroyed with a pickaxe by a 24-year-old man.

“There have been calls to jail Trump since the day he was elected, and today he was certainly put behind bars – or at least his now infamous star on the Hollywood Walk of Fame was caged,” he wrote in an email to Artnet News. “Although it was very quickly damaged by a Trump supporter trying to remove it, the bars did appear to be stuck fast and were there several hours later – to the amusement of thousands of passing tourists.”

Styling himself as a self-described “provocateur,” Plastic Jesus often skewers celebrities like the Kardashians, Kanye West, and convicted sex offender Harvey Weinstein. However, since his election in 2016, Donald Trump has perhaps been the single biggest target of the artist’s guerrilla-style artwork.