In 2017, the White House Christmas decor went viral for all the wrong reasons. For her first holiday season as First Lady, Melania Trump enlisted 150 volunteers from 29 states to help her put together scenes in the theme of “Time-Honored Traditions,” featuring balsam trees dripping with fake “icicles” and trimmed with glass ornaments featuring the seal of each state and territory. 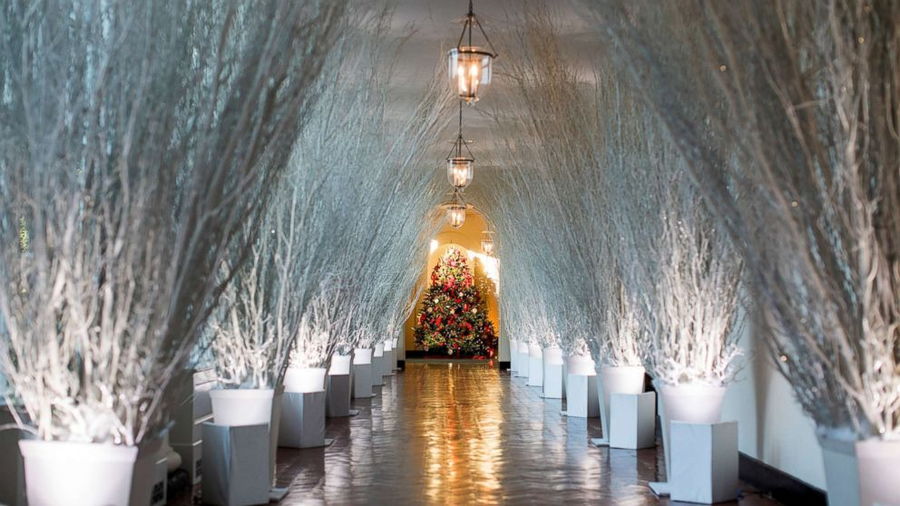 Some of it was the standard Christmas decor you’d expect based on decades of White House traditions, but other elements were more than a little controversial, like a hallway of silvery branches casting creepy shadows onto the ceiling. The internet drew pop culture comparisons ranging from The Chronicles of Narnia to Silent Hill, with one observer even saying “Why do the White House Christmas decorations look like Voldemort is about to come back?”

2018 wasn’t much better, with blood-red Christmas trees lining that very same hallway striking many as something out of The Handmaid’s Tale. 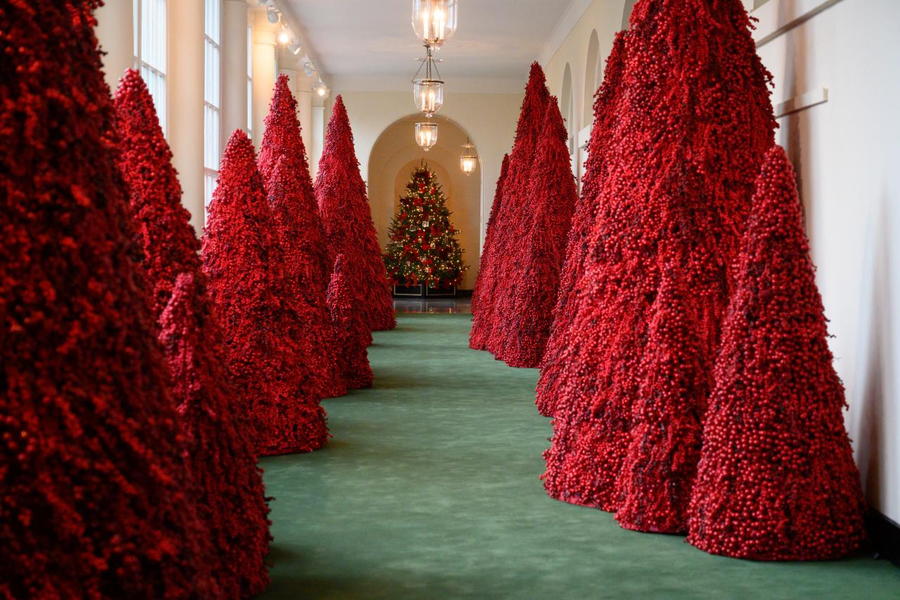 This year, the White House is looking a little less macabre. The infamous corridor known as the East Colonnade has gone in an entirely different direction with transparent towers displaying a timeline of greatness in American architecture and design. 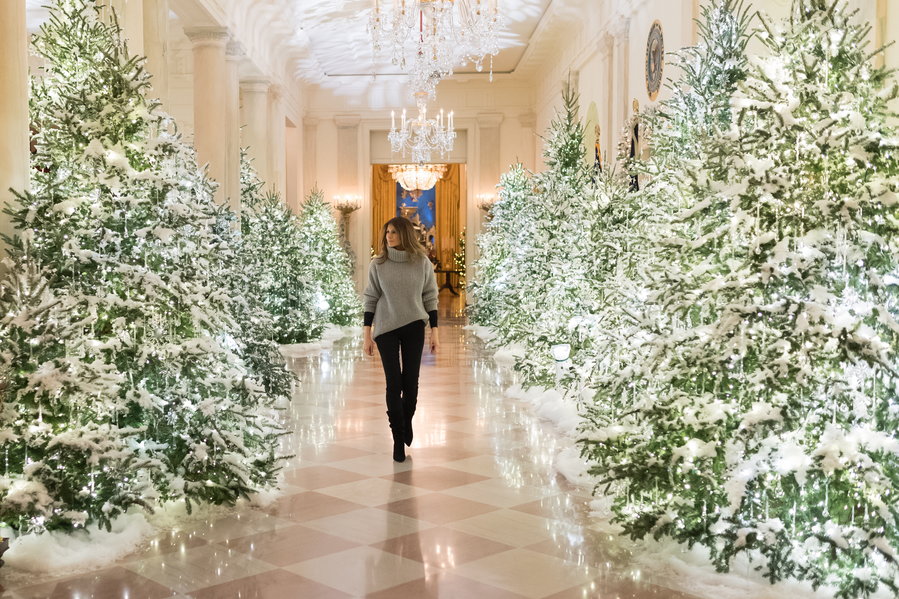 Designed by Melania herself, the decorations throughout the White House are a little lusher and greener than usual, aiming to celebrate patriotism above all else. Other corridors are filled with tall flocked trees, golden accents, fake snow, and red and blue ornaments referencing Melania’s “Be Best” initiative.

One tree is dedicated to Gold Star military families and etchings of 60 innovative structures around the country, like New York City’s Woolworth Building and Seattle’s Space Needle. The official White House tree, which stands alone in the Blue Room, is an 18-foot Douglas fir harvested from Mahantongo Valley Farms in Pitman, Pennsylvania and adorned in 50 paper replicas of state flowers. 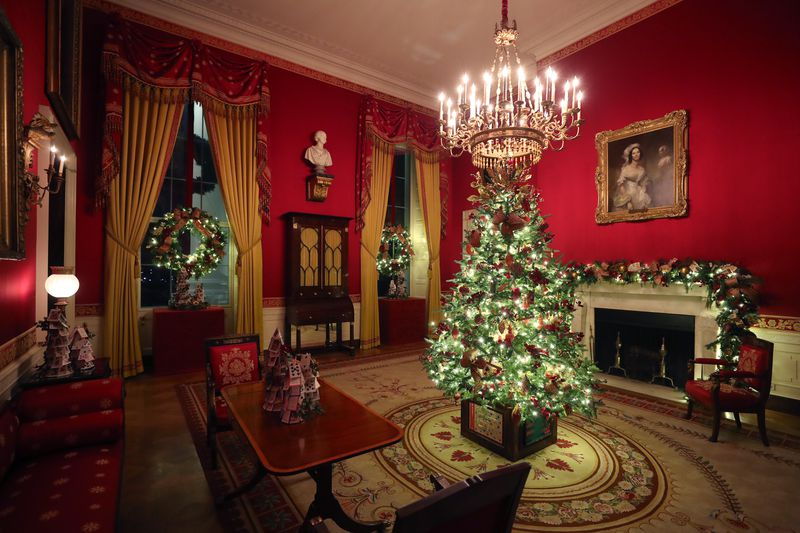 Other features include gingerbread models of the White House and Mount Rushmore, dangling silver stars, and giant golden eagle tree toppers. 800 feet of garlands, 15,000 bows, and 2,500 strands of lights went into the decor, which has been in the works since July.

The official White House website reads: “The First Family is celebrating their third Christmas in the White House. This year’s theme, ‘The Spirit of America,’ is a tribute to the traditions, customs, and history that make our Nation great. Designed by First Lady Melania Trump, the White House decorations celebrate the courageous individuals who have shaped our country and kept the American spirit alive.” 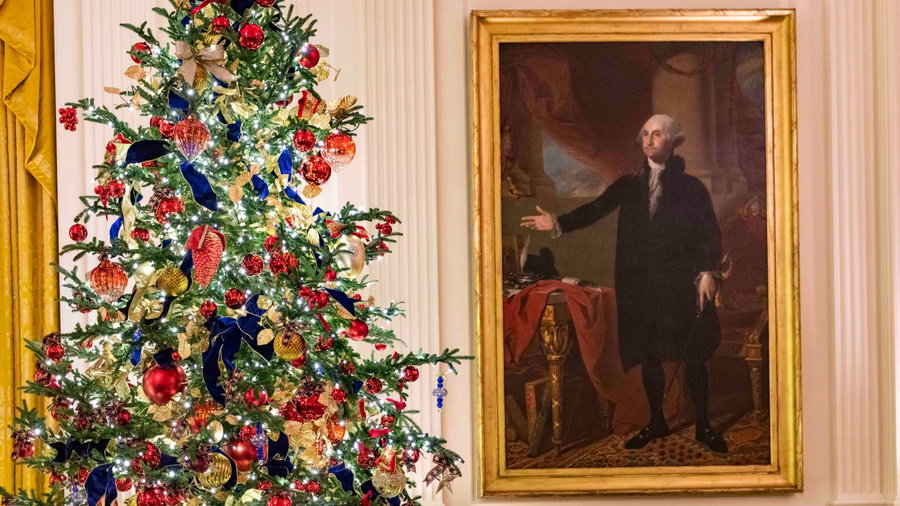 “This Christmas season, I want to honor those who have shaped our country and made it the place we call home,” says Mrs. Trump. “When I travel the country, I am inspired by the hard working people and families that I meet. No matter which state they call home, many Americans share a strong set of values and deep appreciation for the traditions and history of our great nation. Thank you to all of the staff and volunteers who worked to make sure the People’s House was ready for Christmas.”

Where’s the weirdness? What happened to the vague sense of unease, and the easy targets for ridicule? Alas, there are next to none in 2019. We’ll see what we end up with next year, though!