The term “love hotel” tends to have a different connotation in the West than it does in Asian countries like China and Japan, where themed establishments can provide romantic and often fantastical atmospheres without so much stigma. In fact, they’re a longstanding tradition, and they’re not limited to illicit affairs — they’ve become popular with married couples, too. Today, they tend to be marketed as “romance hotels” or “couple’s hotels,” with a focus on fun themes and visually captivating interior design. 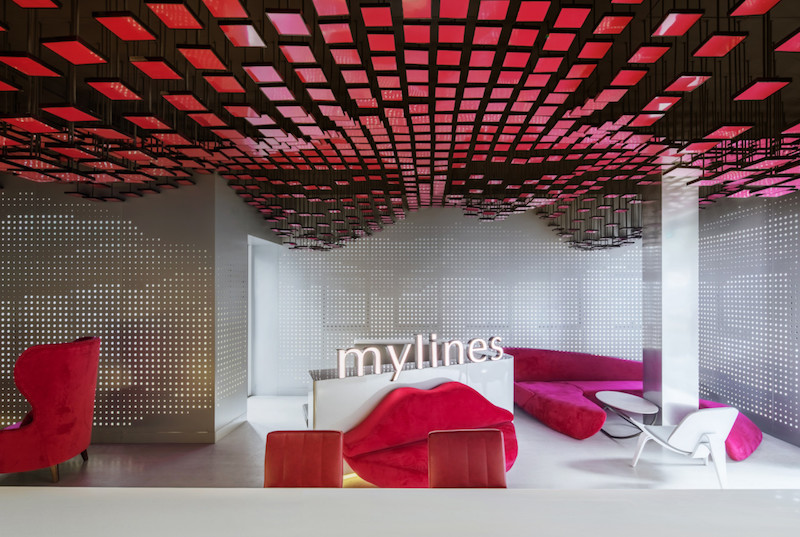 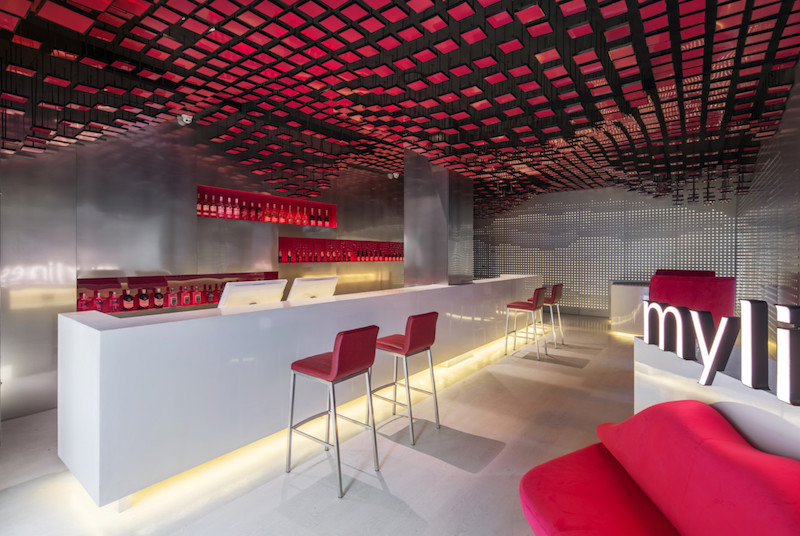 “Mylines Westlake” in Hangzhou, China aims to redefine what a “love hotel” can look like with a dynamic modern design by LYCS Architecture. The firm came up with five categories of room themes based on their “studies of primal human desires:” narcissism, lust, exposure, fantasy, and romance. Each theme comes with its own particular set of evocative design details, including lighting, color schemes, materials, layouts, acoustics, and windows.

The art hotel‘s common areas feature sensually undulating pixelated ceiling installations, lip-shaped cushions, and lots of red and pink popping against white and gray surfaces. But enter any one of the 33 rooms, and you’ll be immersed in a private world that’s either dark, sultry, and neon-lit or cold, hard, and dungeon-like, depending on the theme. The “sadism” rooms, for example, might contain gridded metal walls. 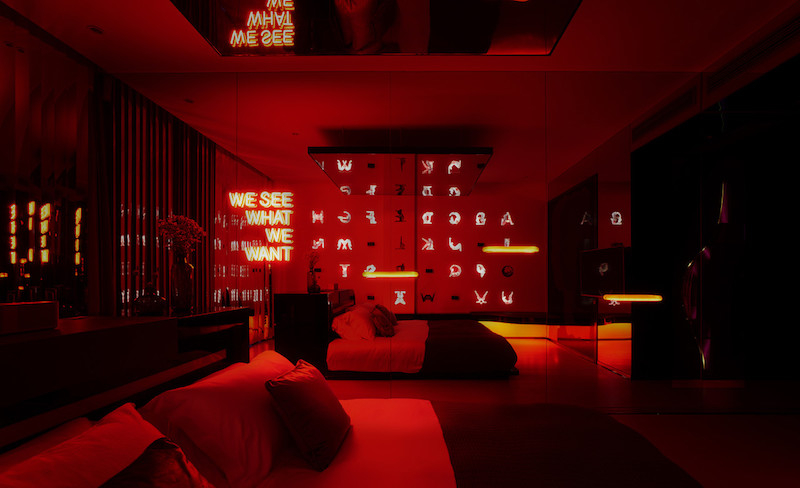 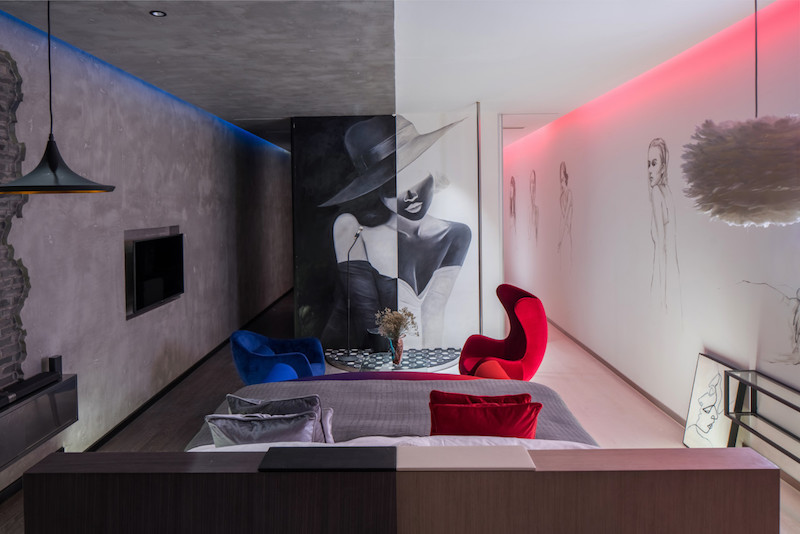 “Lust: When it comes to love affairs, waiting isn’t always so bad,” say the designers. “Prolonged waiting time spent in solitude accumulates growing yearning for rejoice. Accordingly, a unique room type is designed using the psychological pattern as such.”

“The room plan is completely reconsidered: conventional subordinate spaces such as bathroom, shower, and corridors are reorganized to create a sequence of meandering space that enforces a period of inspiring waiting. Lovers are guided separately through two independent doors into his or her own bath, dressing area, and eventually into the bedroom. The separate circulation creates a strong sense of ritual, while the longing for intimacy drives the guests for further exploration.” 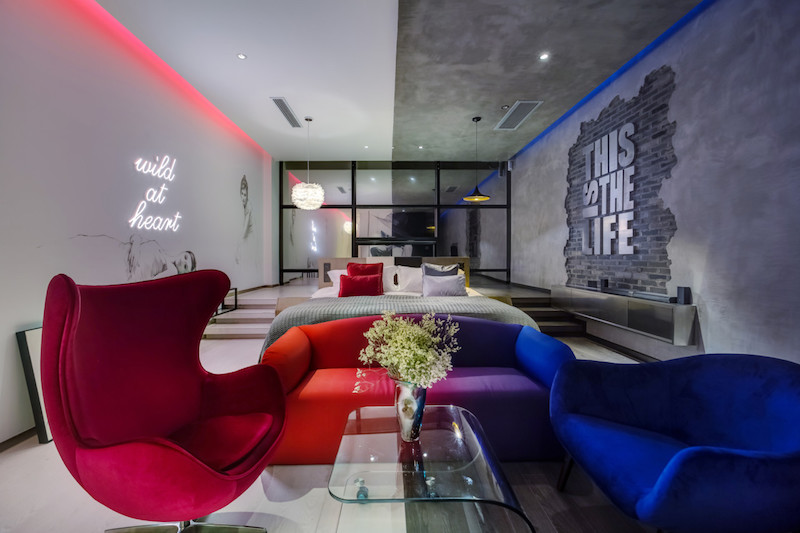 The “suppression” rooms are decidedly more masculine and free of any touches that could be called overly cutesy or precious. In the “romance” rooms, you’ll find billowing textiles, soft surfaces, and murals of pastel skies. The “fantasy” rooms are all relaxing watercolors, and the “narcissism” rooms are predictably covered in mirrors. Finally, the “exposure” rooms play with the concept of voyeurism, featuring soaking tubs at their centers and cushions designed to fit the curvature of the supine body set right beside wide expanses of windows.

“In the rooms themed ‘Narcissism,’ mirrors become an instrumental element for creating the atmosphere,” explains LYCS. “From the ceiling of the aisles to the surface of the curtains, mirrors aroused generously as the wall finish. The shifting materials give ordinary objects additional dimensions. On the sensory aspect, mirrors do not only fulfill the narcissistic pleasure, but also extend the spatial perception of the room beyond its physically bounded dimensions.” 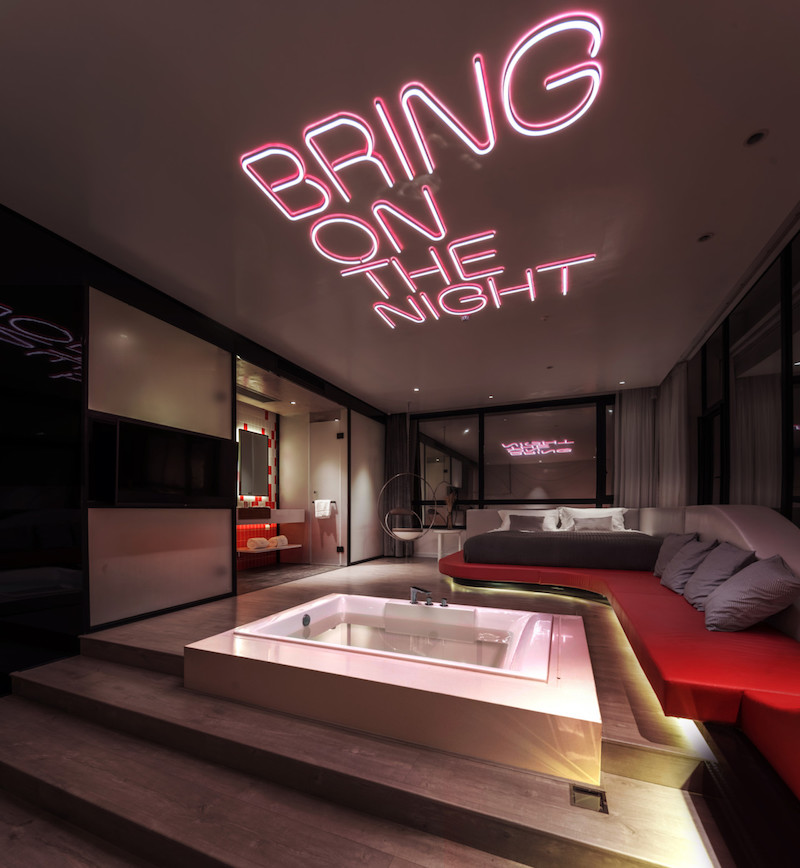 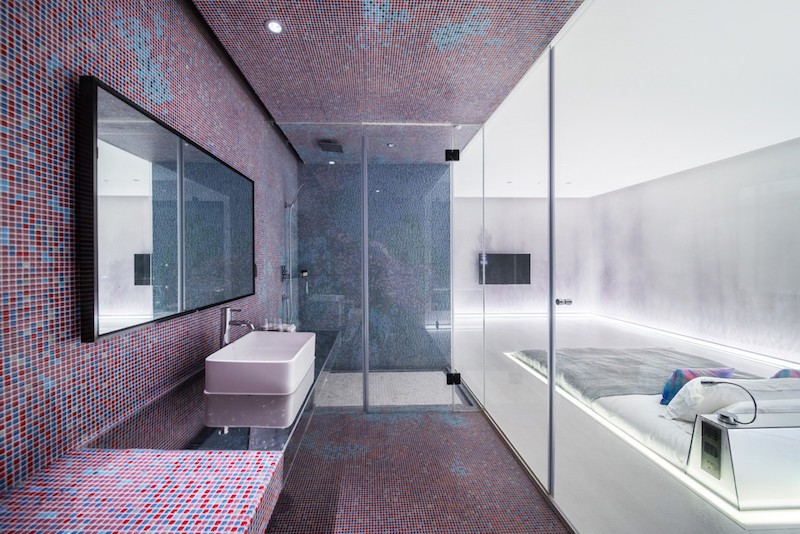 Such carefully considered ambiance, which lacks anything particularly lewd or graphic, lends the Mylines Westlake renovation an air of sophistication rather than one of seediness and normalizes the act of seeking out a special place to take a romantic partner with a specific kind of activity in mind.