With a view of the ocean and a year-round temperate climate, the new M House by architecture firm Estudio Valdés lets the outdoors freely mingle with the indoors for maximum environmental enjoyment. 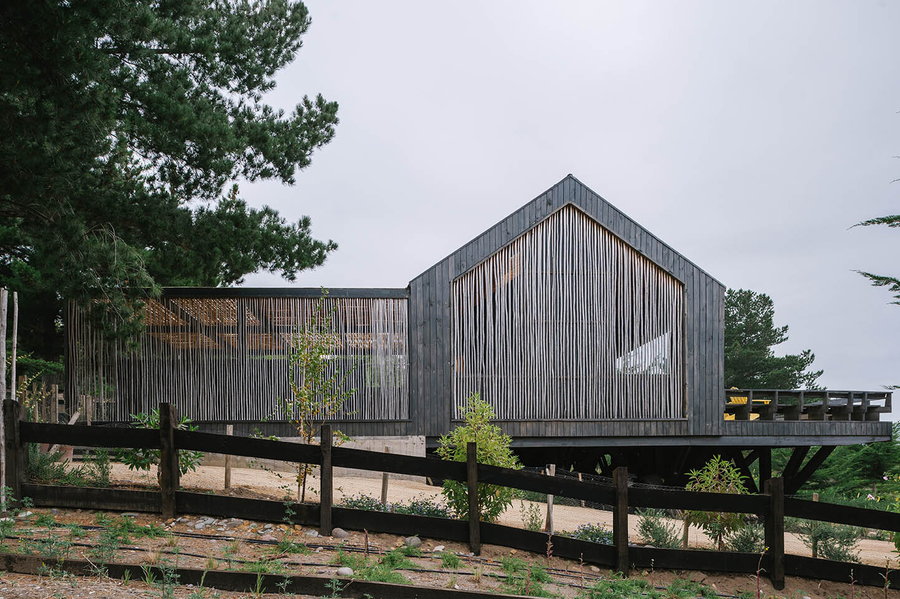 Built as a summer home in the Chilean coastal city of Puertecillo, the beach bungalow was organized to fit the spatial needs of the client’s five family members plus guests. A complementary design imperative was to create a place where the energizing sea air could flow freely on nice days. 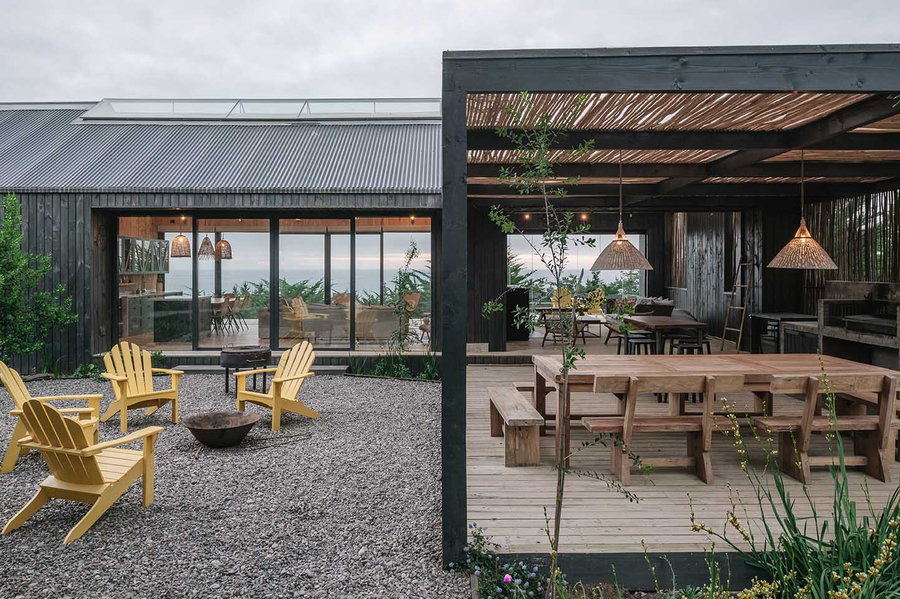 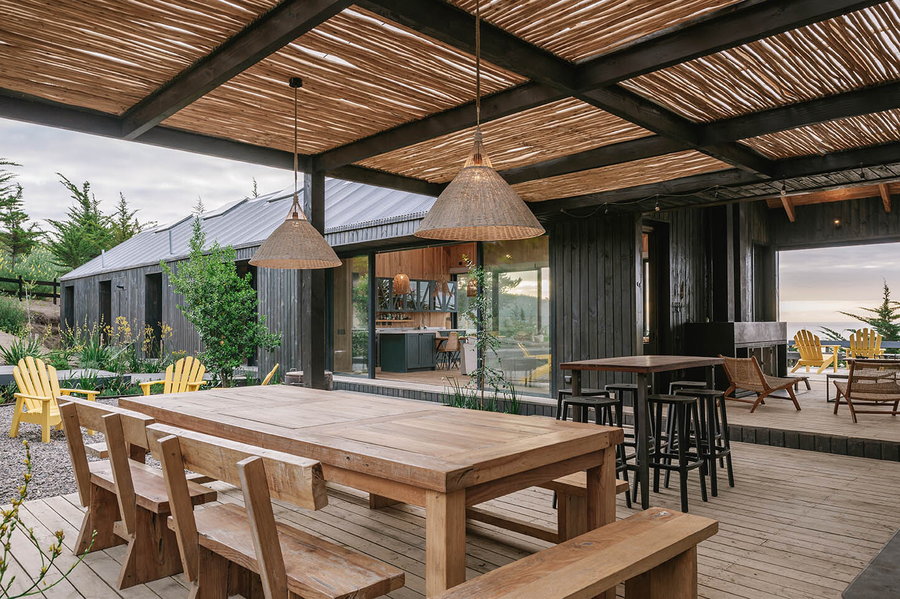 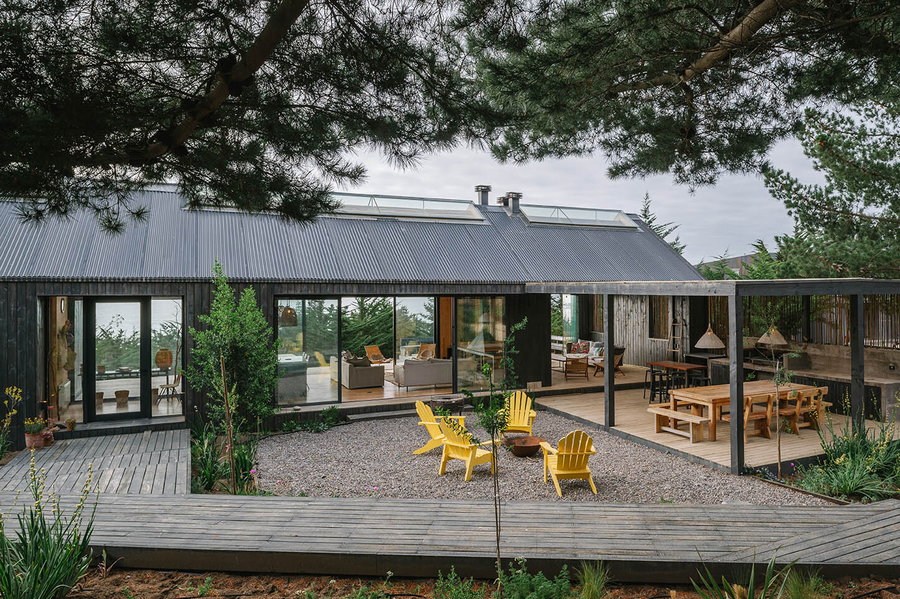 Accordingly, Estudio Valdés used the bulk of the 1820-square-foot dwelling for living space, separating the house into “transparent” and “opaque” sections. The transparent common rooms include an enclosed kitchen and family room, a connected open air sitting room, and a dining area with a covered pavilion. Large wall-to-ceiling windows line most rooms, with wide sliding glass doors allowing them to become one with the outside when the weather allows. That same glass can protect against the elements when shut. An indoor fireplace and an outdoor firepit further accommodate inclement heating needs. 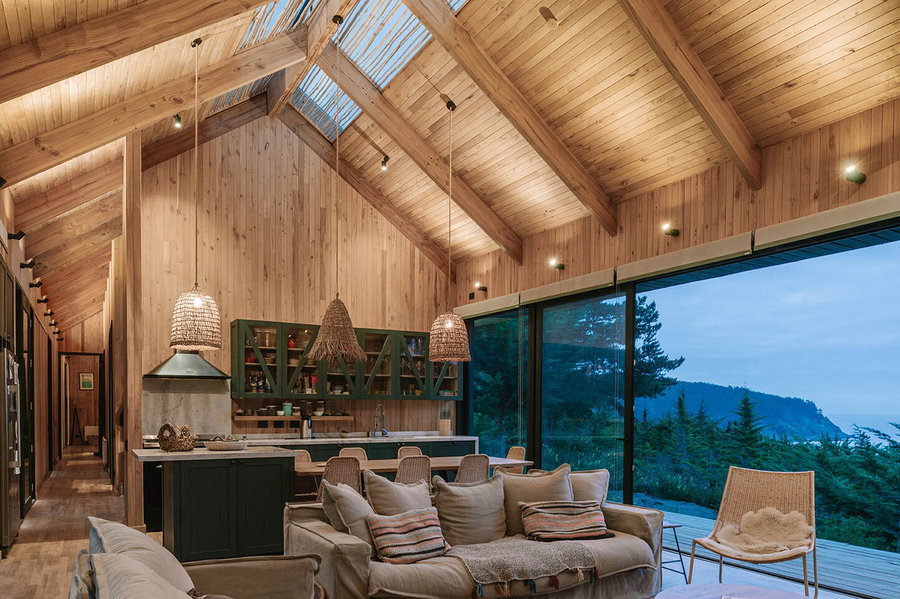 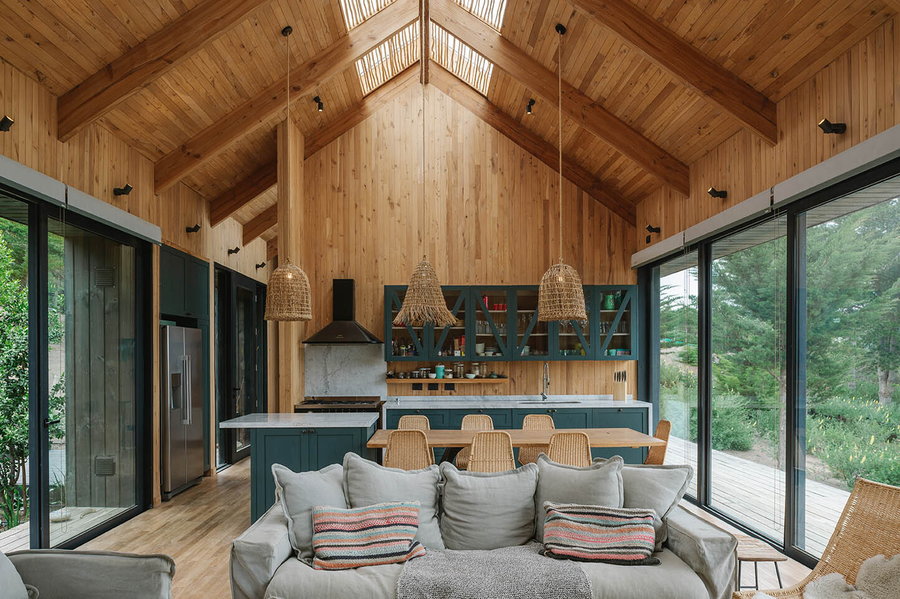 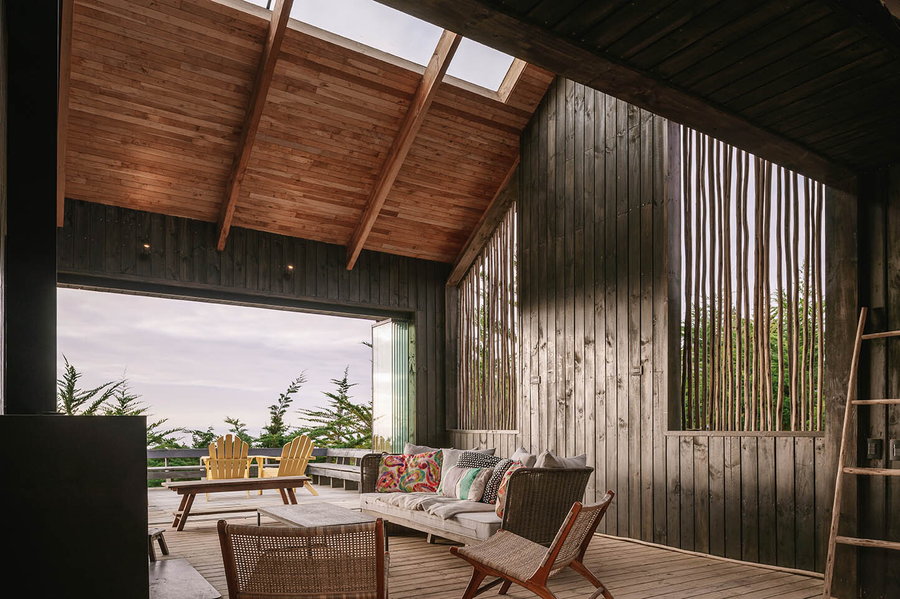 The opaque segment is visibly divided from the rest of the house by an entry courtyard and compact hallway. The three bedrooms are economical but comfortable, with the primary bedroom tucked at the very back for the greatest privacy and the two others fitted with built-in double and triple bunkbeds to accommodate various combinations of kids and friends. Bathrooms between the sleeping chambers add a layer of noise insulation between the spaces.

The firm says the shape of the house is that of “an elongated shed, which occupies its height according to its uses.” Skylights along the entire ridge of the A-frame roof harness the power of the abundant sunrays to provide daytime light for the occupants. 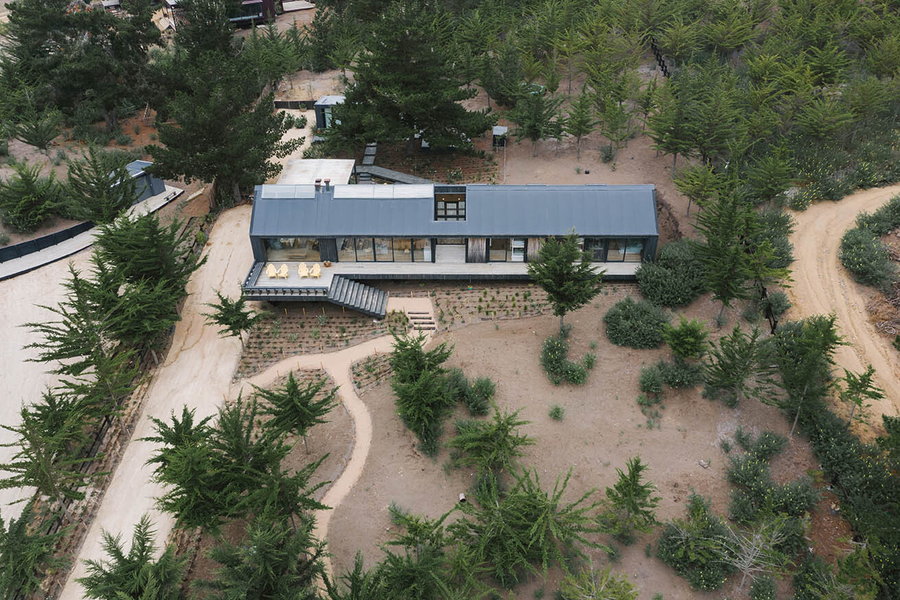 The architects focused on locally sourced resources for the interior, lining the walls with planks of lenga beech wood. The light color provides brightness while the natural grain continues the pattern of “blurring the boundaries between inside and outside.”

The exterior is covered in dark-stained pine boards, a tree also native to the region. The pine slates are interspersed with sections of more organically shaped eucalyptus branches, creating privacy screens around the bedrooms and exterior gathering areas. The combination of branches and planks helps the retreat blend effortlessly with the surrounding forest. 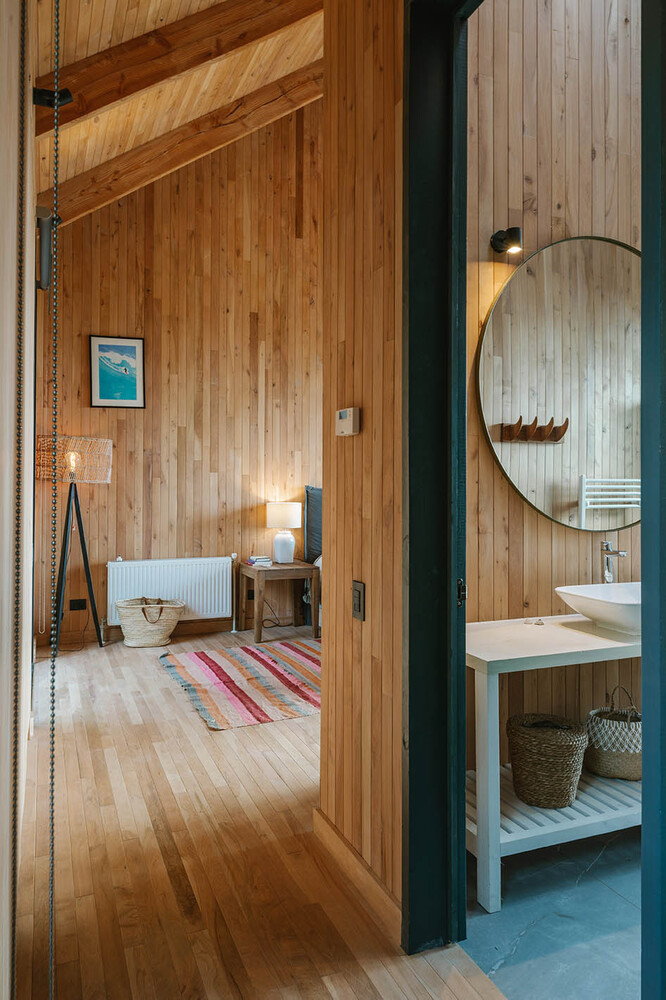 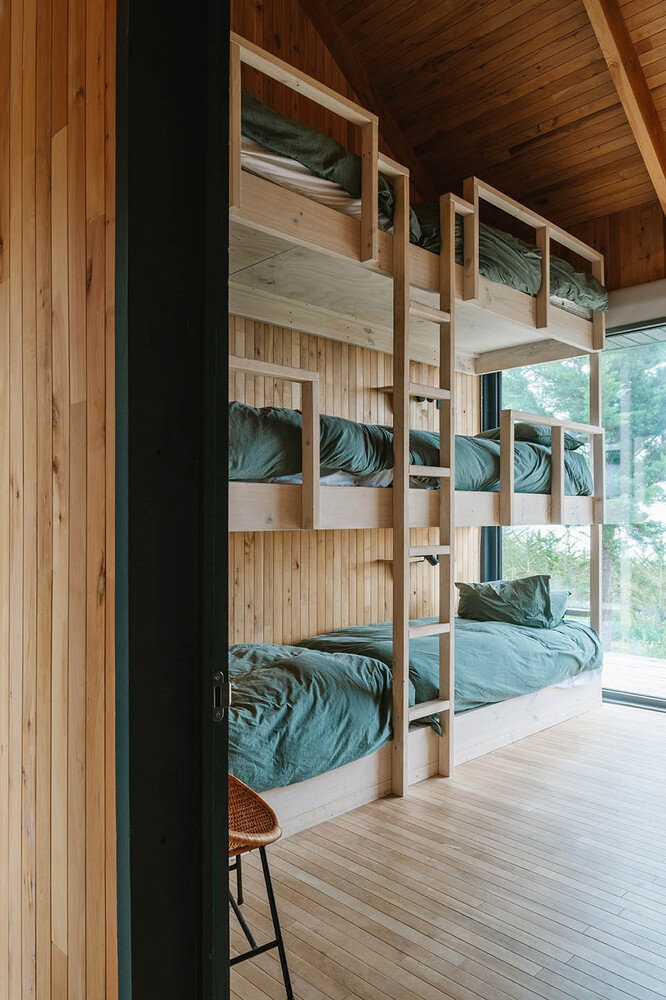 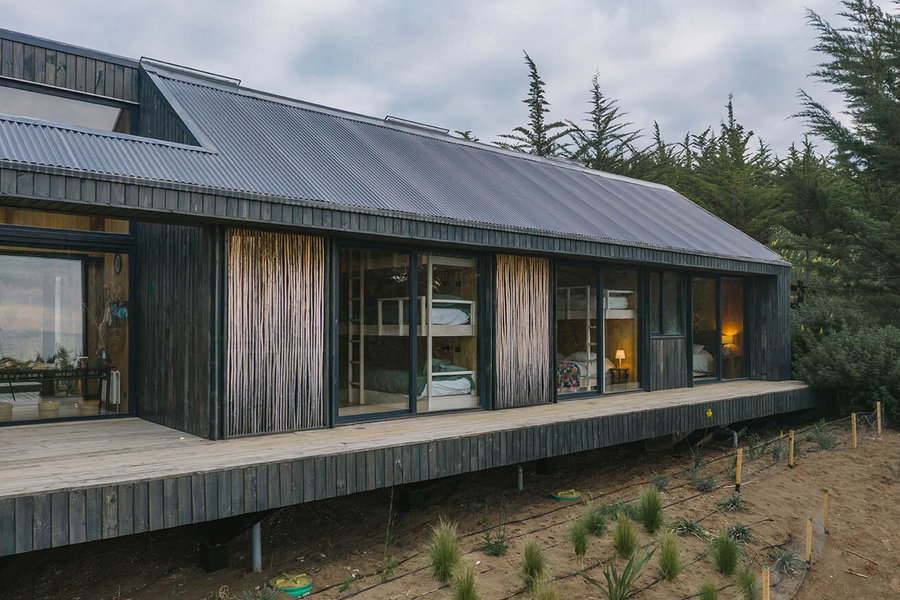 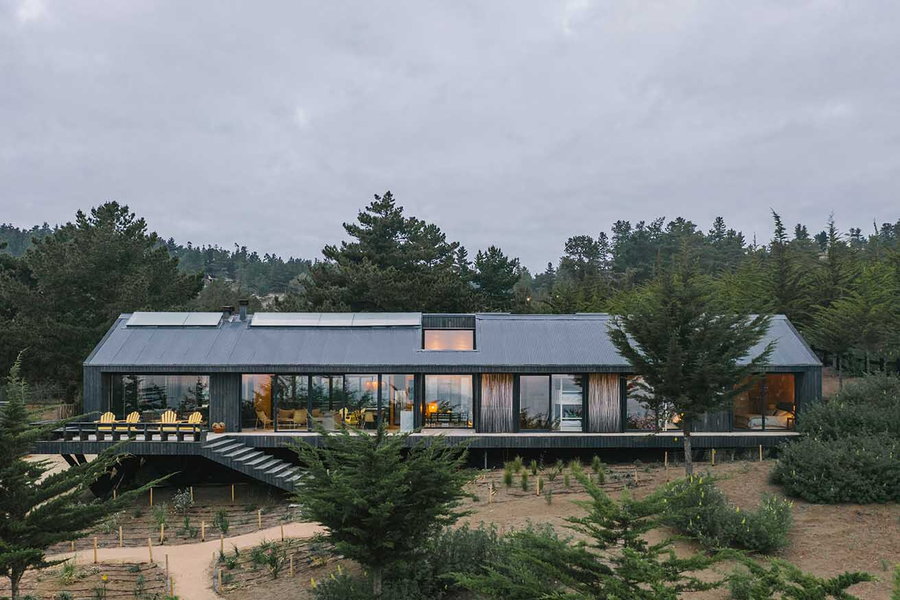 The entire house rests on stilts to achieve a “clear view of the sea above the treetops,” and every enclosure is directed toward vistas of the Pacific Ocean. A collection of loose native plant species makes up the perimeter garden that also acts to hide the home’s structural supports, further adding to the camouflage effect. 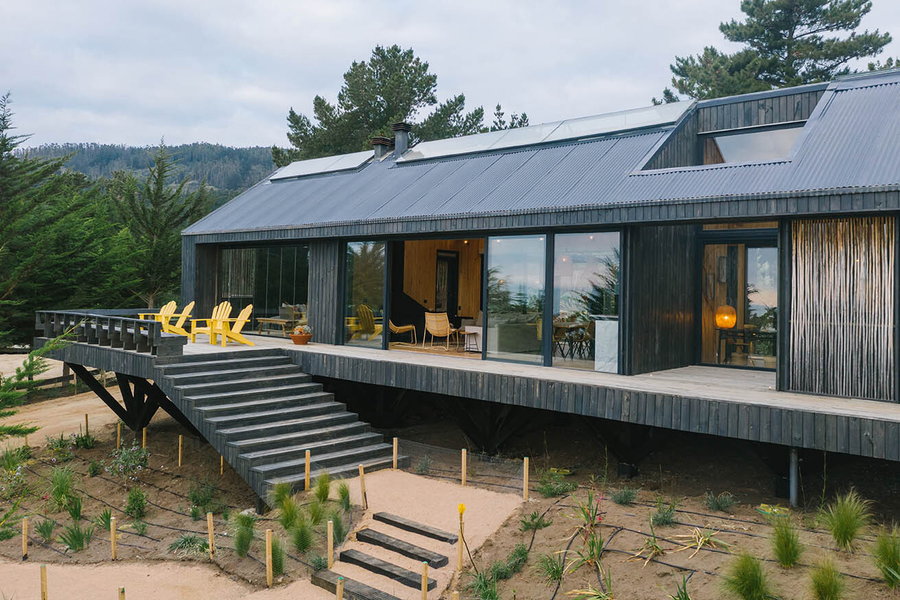 Estudio Valdés was founded in Chile in 2003 as a “modern response to the needs of the new times.” In addition to concentrating on a more efficient architectural process, the studio also pledges a “greater commitment to art and aesthetics.” Although they have a strong emphasis on urban design, the M House, completed in 2020, fits their M.O. of “passionate work in the search of different architectural expressions, with original and expressive materials.”