Danish architecture firm BIG is making waves once again, this time with their LEGO House, a family-friendly LEGO experience center that’s set to open later this month. Located in Billund, Denmark, where the children’s game and favorite toy of wannabe architects was invented, the LEGO House has been in the works for the past seven years. Nicknamed the “Home of the Brick,” the house is close to LEGO’s headquarters and is expected to attract some 250,000 visitors each and every year to partake in its range of guest activities, some of which will charge entrance fees while others remain free-of-charge to the public. 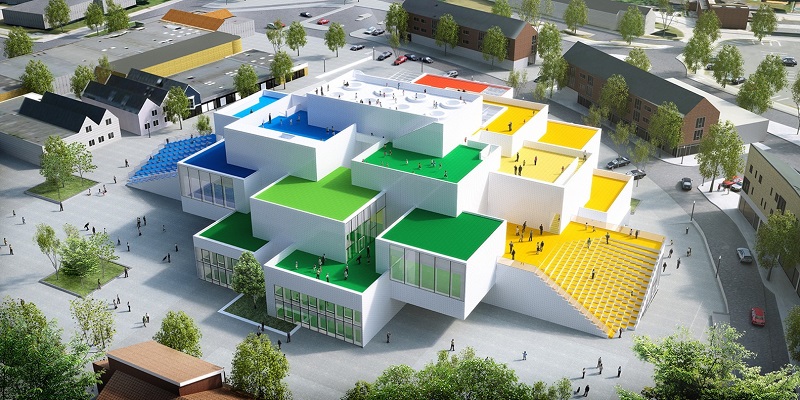 The LEGO House’s 12,000-square-meter campus has been (fittingly) designed to replicate the iconic building blocks themselves. Comprised of 21 LEGO-shaped blocks, each volume is capped with a colorful roof, with the uppermost cube sporting LEGO’s iconic keystone block, whose eight circular protrusions have here been made into giant skylights. Jesper Vilstrup of LEGO House says, “The building itself reflects what LEGO play and the LEGO values are all about. The LEGO brick has been incorporated into the architecture in a simple, but ingenious way, and visualizes the systematic creativity that lies at the very core of all LEGO play.” 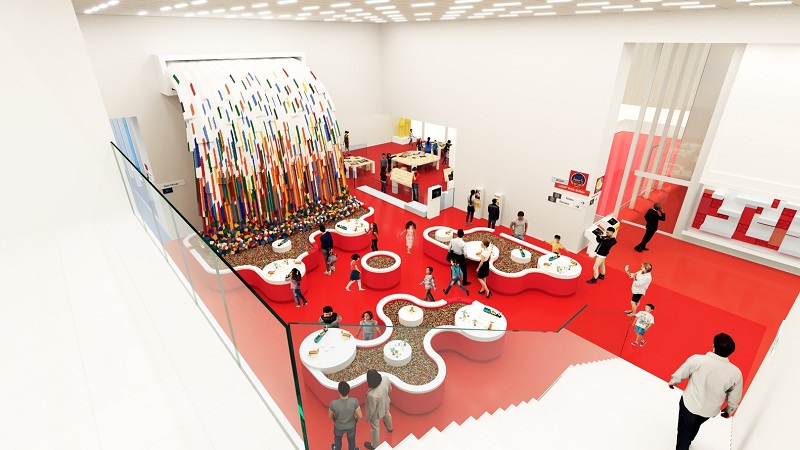 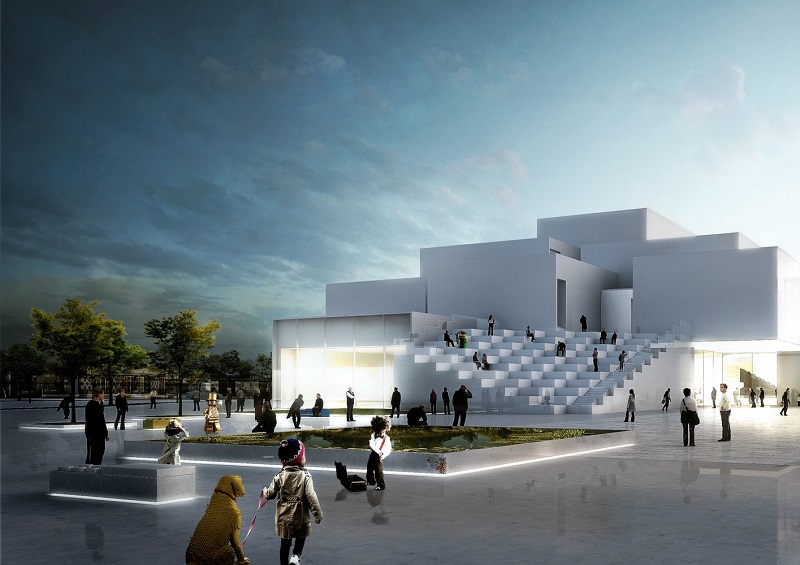 BIG unveiled plans for the design in 2013, and director Bjarke Ingels was very clear that the entire composition of the building was very much intended to be read as a LEGO construction itself, visible on Google Earth as a structure in keeping with the building blocks and their potential. Many of the blocks that make up the LEGO House have also been adorned with huge glazed fronts, all of which open onto the rooftop terrace of the volume below them. The blocks are all clad in white tiles, the materiality of which has been carried inside the building to line the walls that drop down over the central circulation at the house’s core. 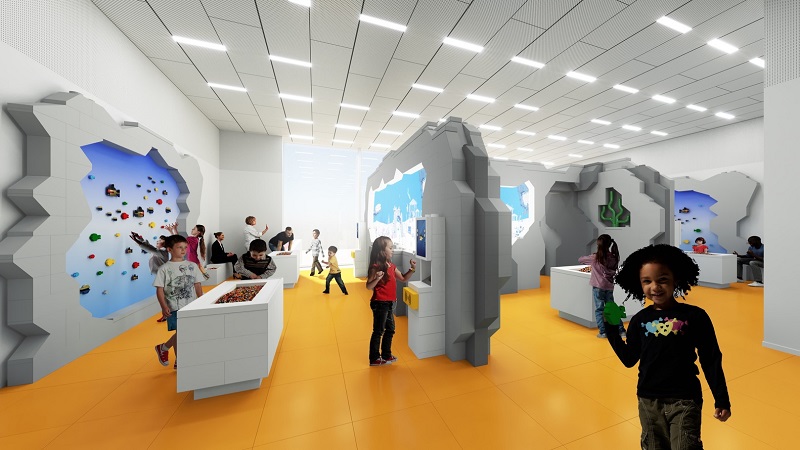 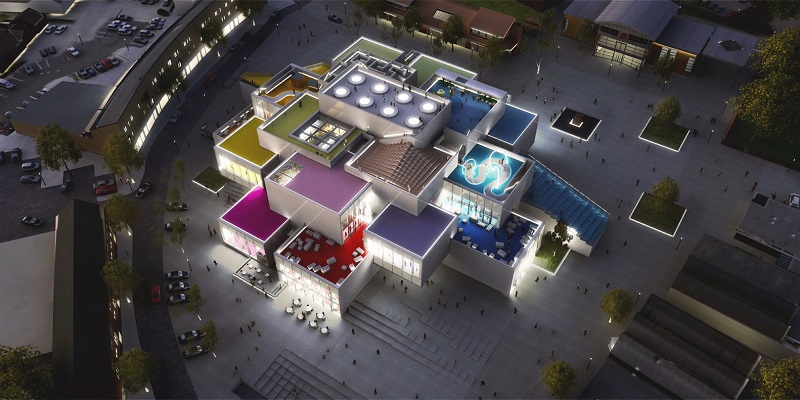 The building will house a number of restaurants, conference and meeting facilities, a 2,000-square-meter public space for events and interactions, and play zones that will be color-coded according to their function: yellow for emotion, blue for cognitive, red for creative, and green for social. A gallery will display LEGO creations and showcase the wildest possibilities of the world-famous bricks, while the rooftop terraces will be open to the general public. 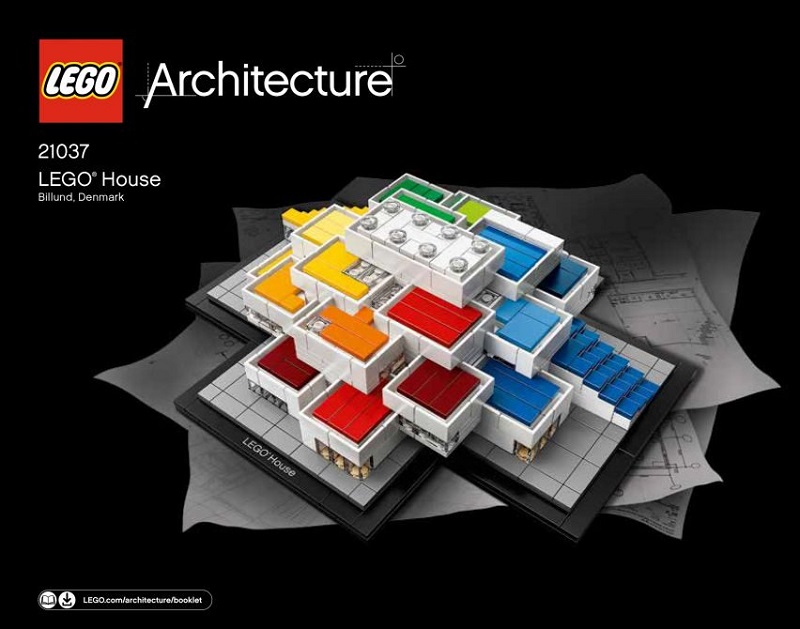 Continue reading below
Our Featured Videos
The LEGO House is designed to be appealing to both adults and children and will continue the toy’s appeal well into the modern era. To coincide with the opening of the center, LEGO has recently released a new model kit of the building itself, so not only can you go and experience the LEGO House from the inside, but you can also play architect and master builder by creating it yourself! In total, the model consists of 774 pieces, which are designed to be constructed in 197 steps. The LEGO House kit is part of the company’s “Architecture” line, which appeals to aspiring architects young and old. Believe it or not, many professionals actually cite LEGO as an early inspiration for their design careers.