The bathroom isn’t usually the most glamorous or photogenic room in the house, but it’s certainly one of the most private, offering a sanctum for vulnerable physical and emotional states. In the 18th and 19th centuries, as running water in homes became a symbol for luxury and modernity, artists became increasingly interested in committing these spaces to canvas, until the bather became one of the most common motifs in modern art. Some of these works are voyeuristic, giving the viewer a glimpse of an anonymous nude, while others capture the connotation of the space itself.

UK-based bathroom retailer QS Supplies has taken some of these paintings and brought them to life, giving them a whole new sense of realism. Translating six scenes into digitally rendered environments, they let us envision these painted spaces as if we could walk right into them, taking new inspiration from their designs. Some are ordinary, others strikingly ornate – one is even the scene of history’s most famous bathroom assassination. 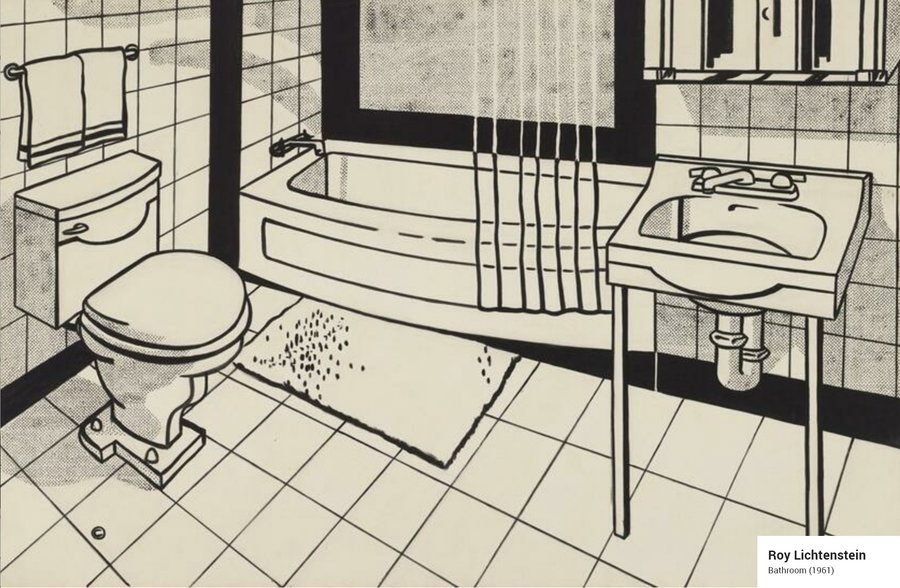 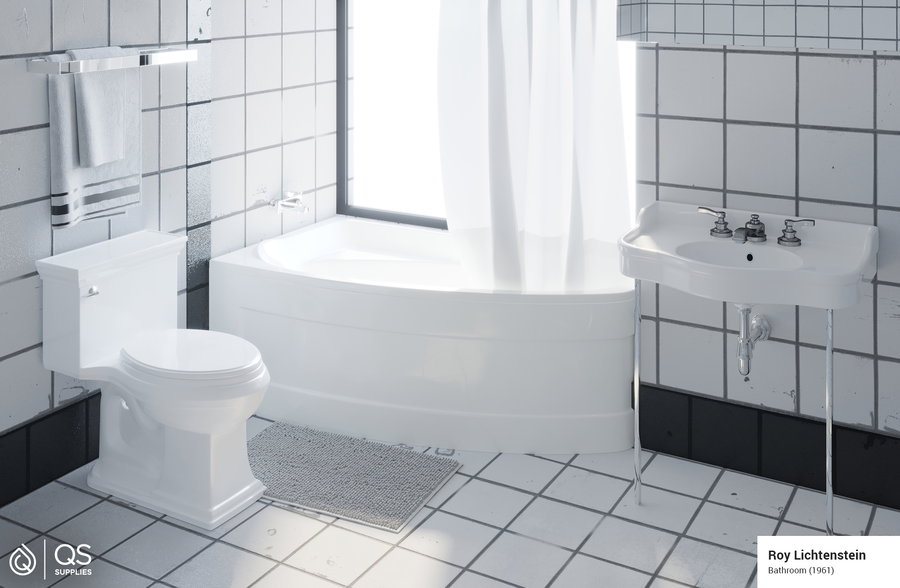 “Whether you want a bathroom for solo spa sessions, sensual encounters, or simply to murder a French revolutionary, history’s finest artists are way ahead of you with the mood boards,” the company writes. “Who better to turn to for bathroom renovation ideas?” 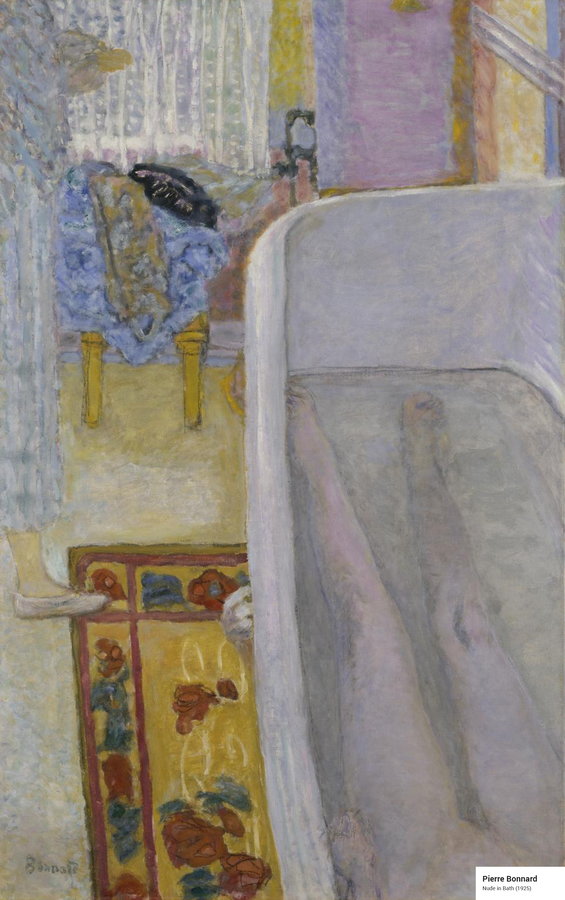 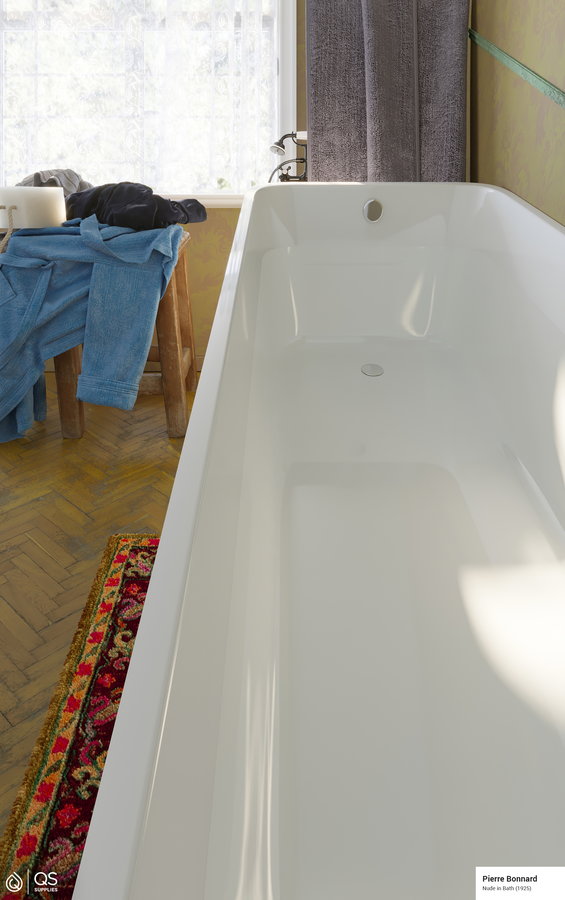 Each work is presented on the QS Supplies website as an interactive sliding image between the original painting and the digital rendering (shown here as separate images). Some elements are left exactly as they were originally envisioned, while others have been altered slightly to show contemporary equivalents. 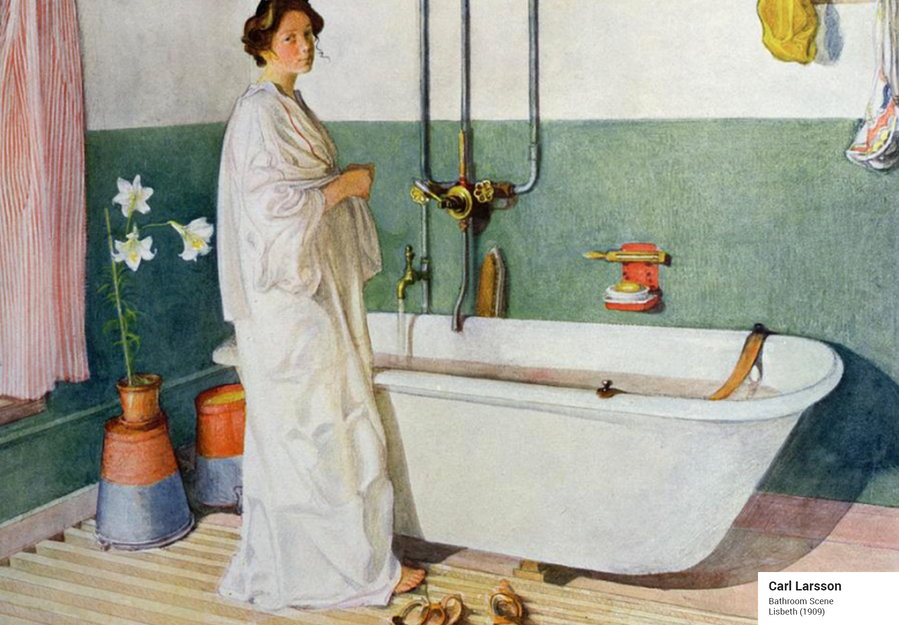 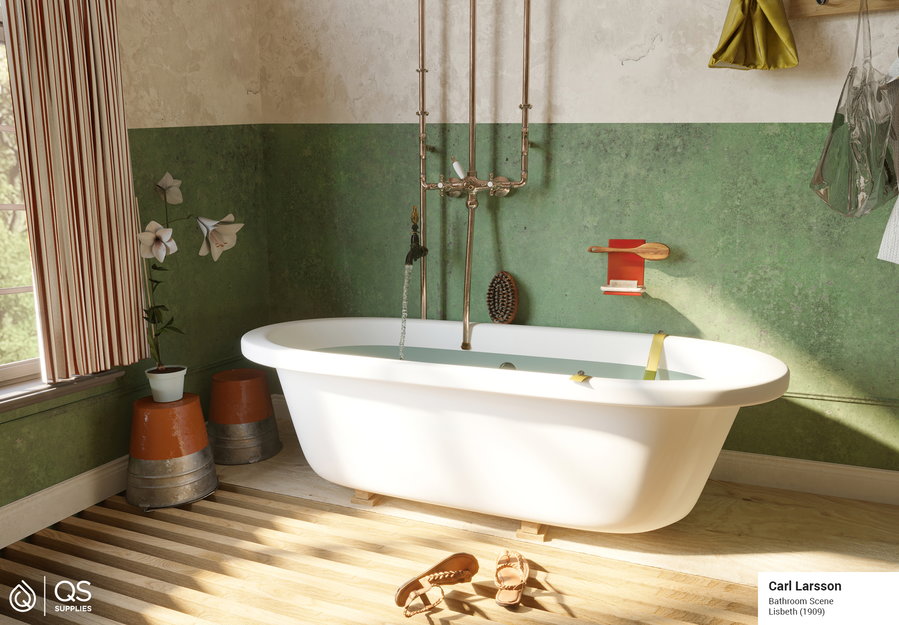 Carl Larsson’s Bathroom Scene – Lisbeth (1909) is among the most Instagram-worthy of the bunch, and it’s directly translatable to desirable contemporary style. The painting depicts the artist’s daughter Lisbeth drawing a bath sometime in the late 19th century within the Arts and Crafts home decorated by Larsson’s wife Lilla Hyttnäs. We just have one question: where can we buy that beautiful brass tub filler? “You’ve got to love that tub and vintage-style exposed pipes,” QS writes, “and if walls a shade of ‘creativity green’ never go out of fashion, how about a Scandi-style sauna underfoot?” 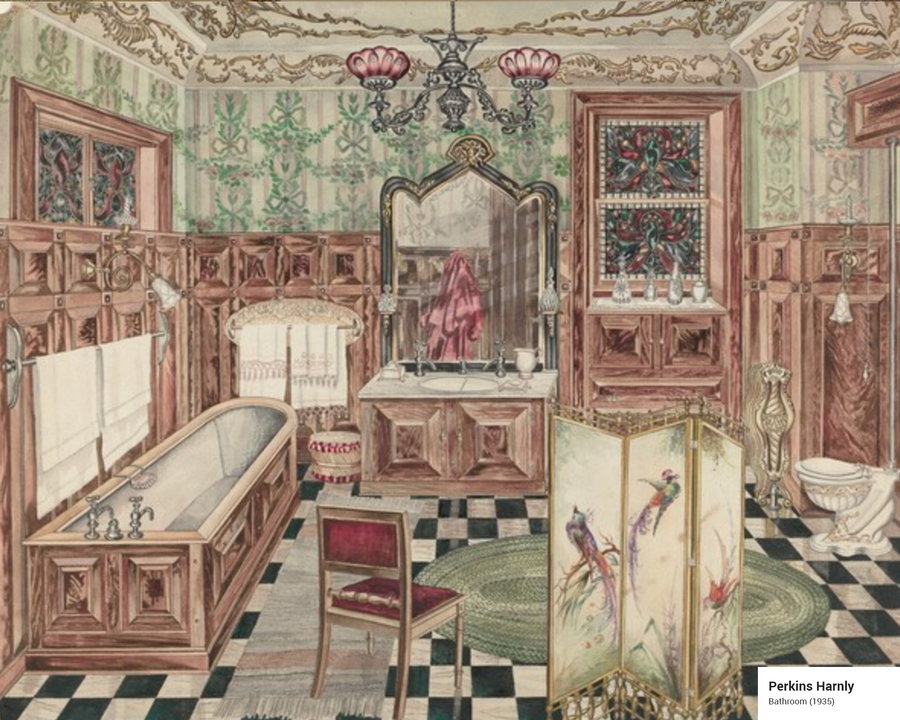 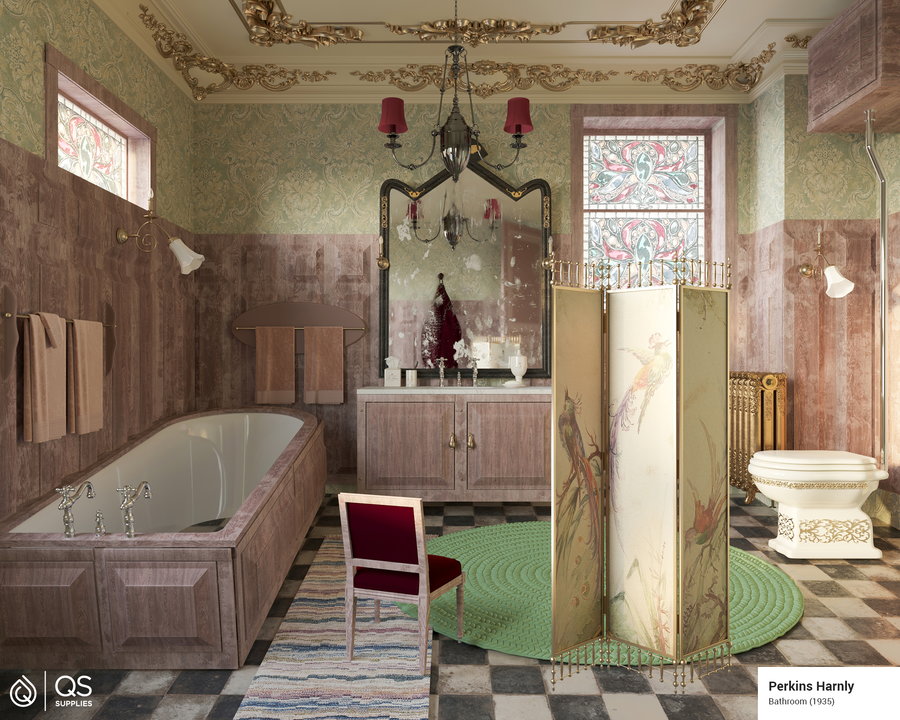 Perhaps most divisive of all is the re-imagination of the 1935 painting simply titled Bathroom by Perkins Harnly, depicting a Victorian bathroom with paneled wood walls, a velvet chair, a Chinese-style painted folding screen, and a gold-embellished toilet. If you’re a maximalist, you probably love it. Otherwise, it’s…a lot.

As promised, QS has also included a portrayal of the death of French revolutionary Jean-Paul Marat at the hands of Charlotte Corday in this series. Jacques Louis David’s version, featuring Marat slumped over in the tub in the middle of writing a letter, is more famous, but in terms of bathroom design, there’s less to work with. Here we have Edvard Munch’s more colorful interpretation. “It’s not the jolliest bathroom, then. But the use of marble adds a grandness and cleanliness to the scene. The terracotta tiling feels very European, and the curved doorway softens the austere scene.” 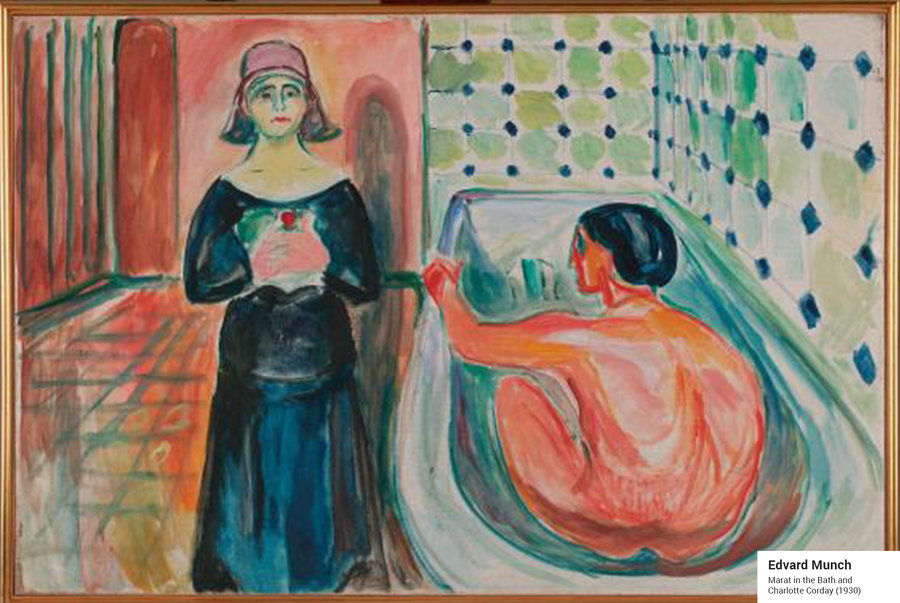 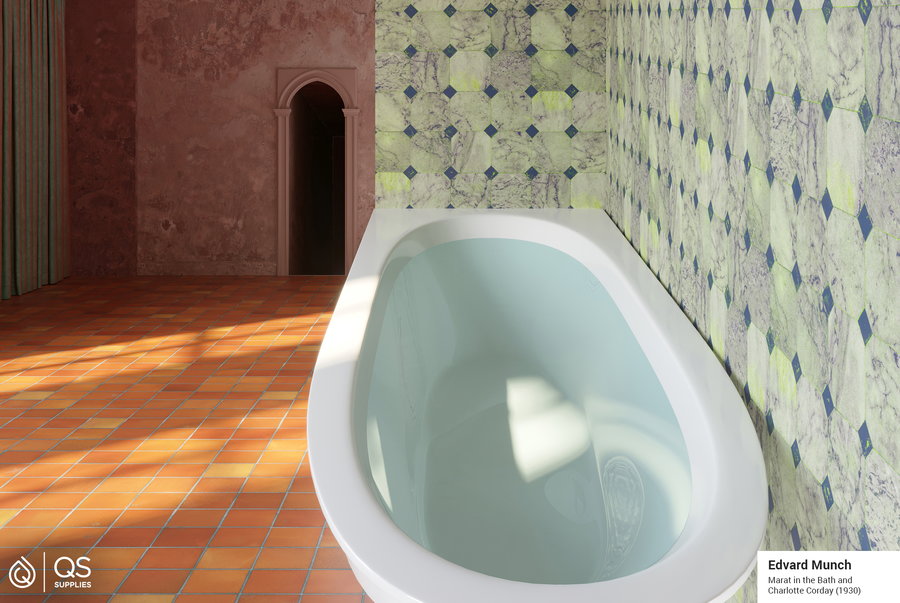 Check out the rest on the QS Supplies website, and get more bathroom inspiration from these modern master bathroom designs.