This is all about dining out as concept – how do you reflect the manly pursuit of incinerating big hunks of meat on a barbecue, in a high-end designer restaurant? Barbecoa in the City of London (with an inspiring view of St Paul’s Cathedral through the floor-to-ceiling windows) is the creation of UK chef Jamie Oliver. Design Research Studio, renowned designer Tom Dixon’s interior and architectural design studio, built the interior of this up-market eatery to reflect the meat (red banquettes), the smoke (smudgy-looking concrete tables) and the herbs used in cooking (green pendant lights). All suffused with a golden glow from various examples of glamorous Tom Dixon lighting throughout.

An international foodie tour-de-force, Oliver has pioneered to convert mass catering across the Western world. From taking on the provision of healthy food in UK schools with his ‘Jamie’s School Dinners’ Channel 4 TV documentary series, to Jamie Oliver’s Food Revolution on ABC, wherein he attempted to convert America to healthy eating from the playground up, he’s been on a one-man mission. So, what is the thinking behind Barbecoa, his barbecue restaurant? Smoked meat anyone – healthy enough for you? Well Jamie’s always been about getting back to basics – as long as you have a few quid (or dollars) in your pocket. Smoking and curing meats – a culinary skill that’s surely prehistoric – lies at the heart of the menu.

The wheel was invented for good reason: Barbecoa’s mighty barbecue!

The kitchen – complete with massive slabs of animal over burning charcoal pits – is visible through glass from the restaurant interior. Vegetarians may not feel entirely at home here, though meat is not the only fare on offer. This is fancy cuisine with an international flavor and a comprehensive menu. 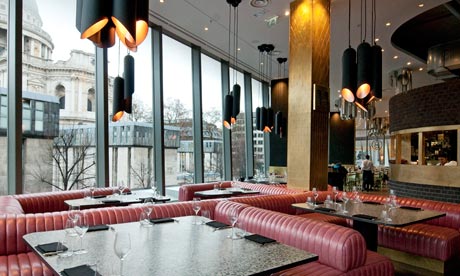 If it all feels a bit hot, just look out the window!

The red banquettes are supposedly reminiscent of eating round campfires, and Tom Dixon’s signature mood lighting infuses the whole with a warm glow.

Green pendant lights and upholstered chairs reflect the copious use of herbs. The effect is dramatic, yet cozy – though the designer chairs are possibly an exercise in ‘style over function’ – sturdy, utilitarian, they’re also (reportedly) a little hard and uncomfortable. But hey – what do you expect from a campfire barbie? Luxury?

Lots of wood – you could be in a forest, sitting round the campfire.

Though it has to be said – visual luxury is what you undeniably get here – and that’s even before the food is brought out! Throw in London’s iconic cathedral (try to get a window seat) and this is a feast for the eyes, as well as for the palette. The warming atmosphere created  by wood, polished concrete, brass and marble melds together with glowing designer lights. You may not be sitting in the great outdoors, feeling a little chilly and cuddling closer to the flames of your campfire, but this is (arguably) the next best thing. Interior design can create an overpowering ambiance, and this collaboration between a famous chef and a famous designer certainly packs some impact. Though if watching carcasses char over flame is not your thing, maybe give it a miss.