Nearly a year into the coronavirus pandemic, most of us are sick to death of being stuck in one place. Designer Virgil Abloh leans into this feeling with his new fall-winter 2021 menswear collection for Louis Vuitton, imbuing it with a love of travel and an appreciation for classic urban architecture. And since we couldn’t hop on a plane to see the show in person, Abloh brought Paris to us, presenting the collection virtually.

The presentation itself is a video inspired by “Stranger in the Village,” a 1953 essay by novelist James Baldwin, featuring Saul Williams wandering through a snow-covered landscape with embossed luggage in hand before entering a marble-clad set inside the Tennis Club de Paris (modeled after Mies Van Der Rohe’s iconic 1929 Barcelona Pavilion). Models chat on benches, casually lean against walls throughout the space as if they’re waiting for flights, or stride around with purpose, all showing off their ensembles in the process. 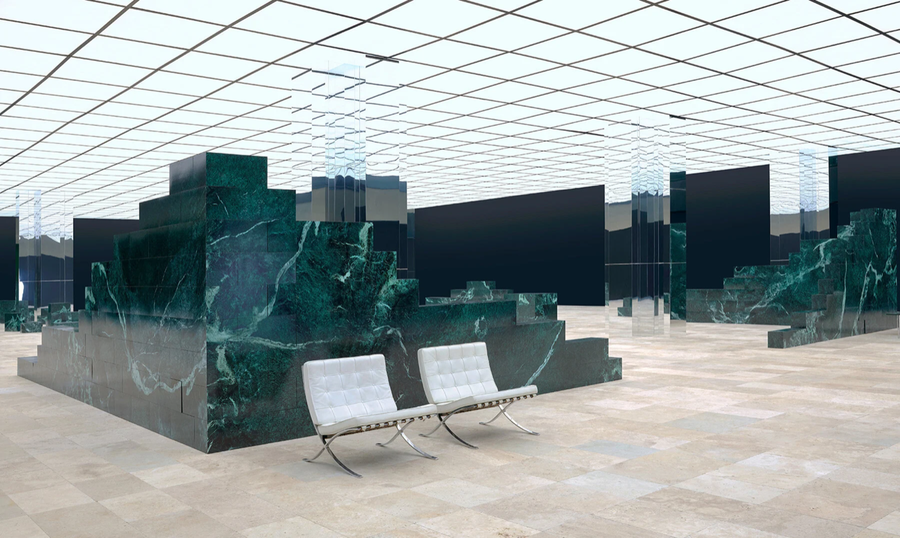 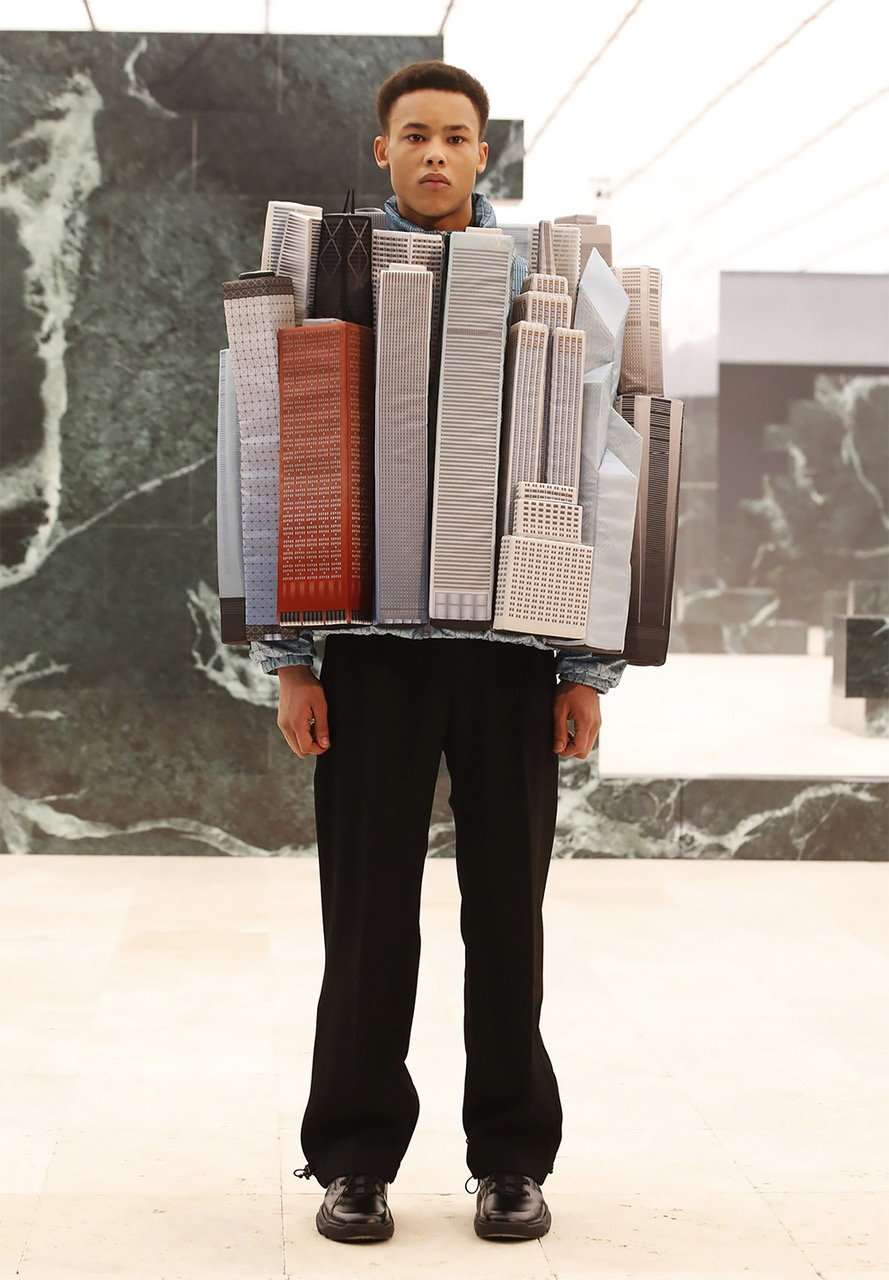 Notably featuring an unusually high number of Black models, the presentation also explores Abloh’s feelings about appropriation of Black culture. Performances include spoken word poetry by Williams and British poet Kai-Isaiah Jamal, whose poem includes the line “As Black people, and as trans people, and as marginalized people, the world is here for our taking, for it takes so much from us.” Rapper Yasiin Bey, better known as Mos Def, closes the show.

“In ‘Stranger in the Village,’ Baldwin draws parallels between his experiences as an African-American visitor in the Swiss mountain village of Leukerbad in the 1950s – the only person of color – and his life as a Black citizen of America,” the show keynotes read. “It deals with the experience of being recognized and gazed upon as different, illegible, even alien. Emblematic of this circumstance, ‘Stranger in the Village” also illuminates the experience of being Black in Europe, and being a Black artist in the birthplace of European art. The performance embodies the physical confrontations with the psychological conflicts explored in Baldwin’s essay.” 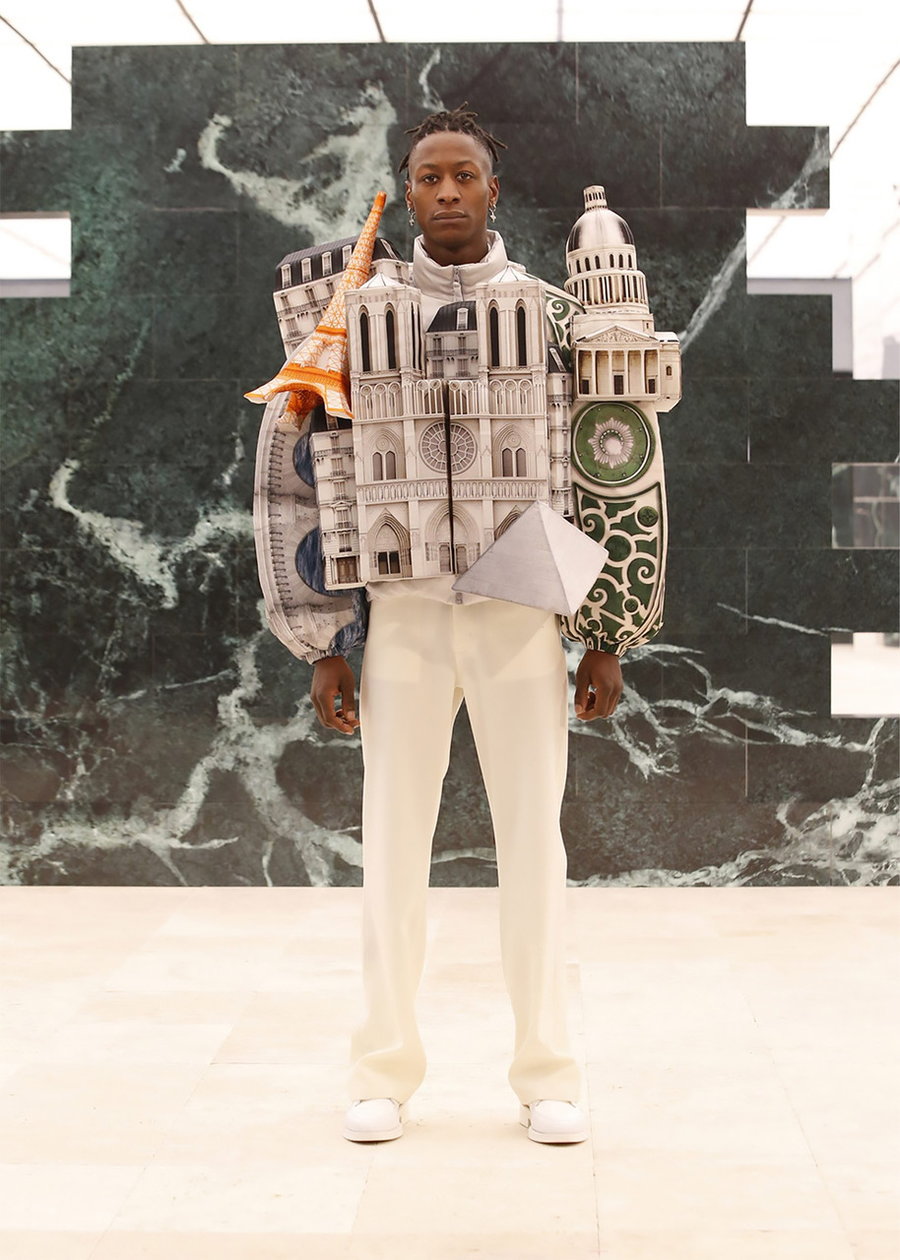 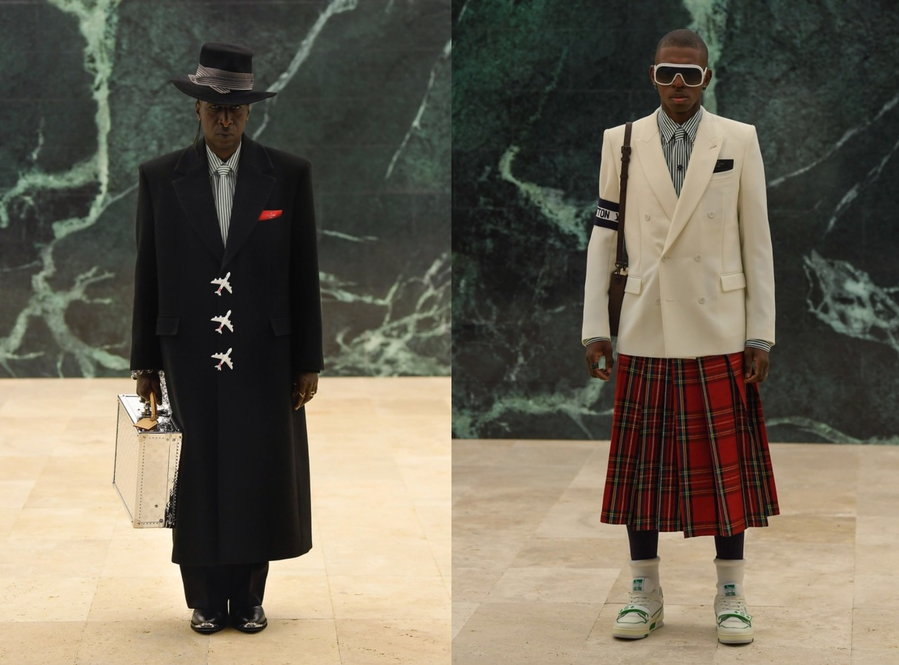 According to the keynotes, the figures we see include male archetypes such as “the Artist, the Salesman, the Architect, the Drifter, etc.” The collection, they say, asks, “Who can claim art? What defines low vs. high? Who gets to make art? Who gets to consume it?”

The clothes are as sharp as you’d expect from Abloh and Louis Vuitton, consisting mostly of crisp suits, puffer jackets, vibrant patterns, and silhouettes that bust gender norms, like skirts and pleated dresses. References to travel pop up all over, too, including oversized buttons and handbags shaped like planes.

None of the clothes are more dramatic than a pair of “wearable miniature cityscapes,” which blur the lines between sculpture and clothing. Crafted as detailed 3D models rendered in typical puffer jacket materials, they include the “Paris Skyline Puffer,” featuring monuments like the Eiffel Tower, Notre Dame Cathedral, Louvre, and Arc de Triomphe, and the “New York City Skyline Puffer,” featuring skyscrapers from New York and other cities. 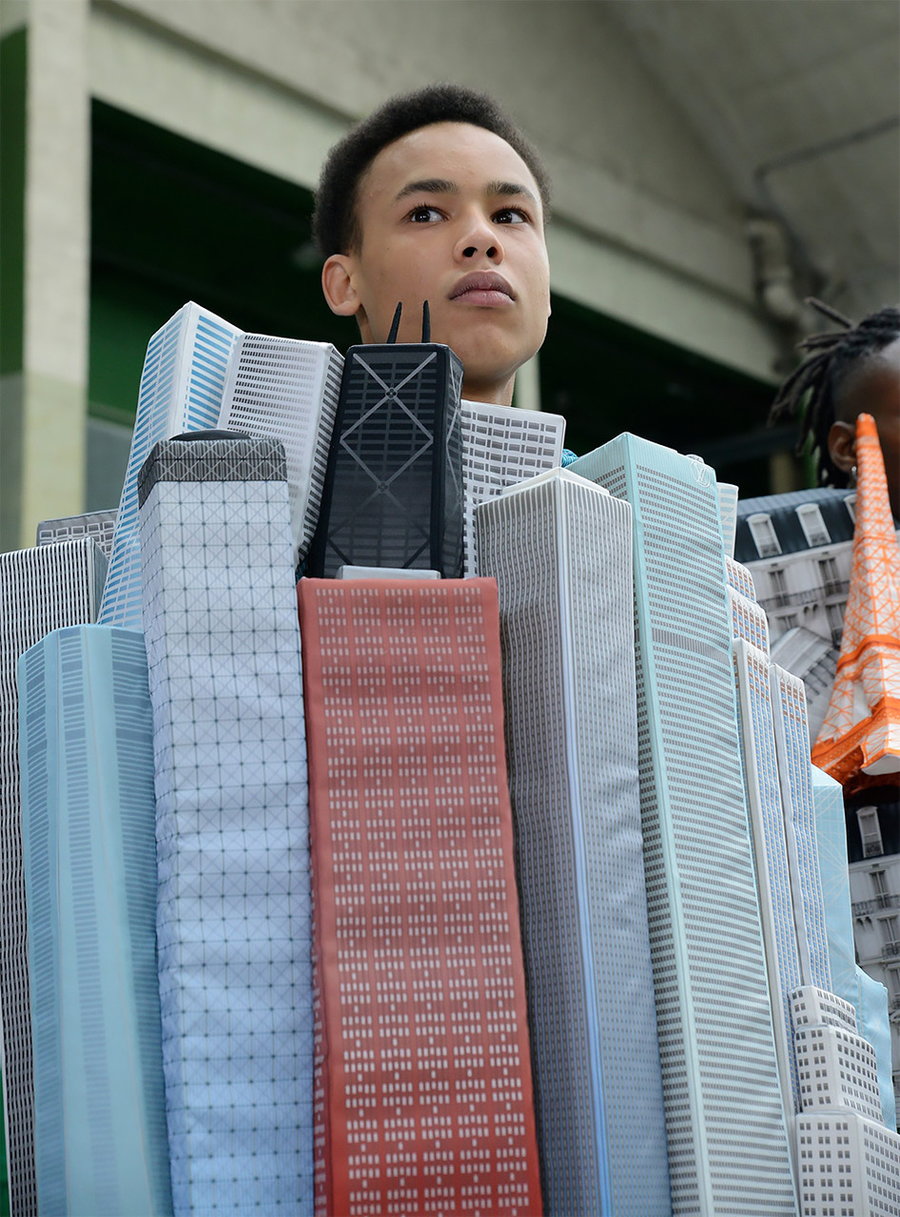 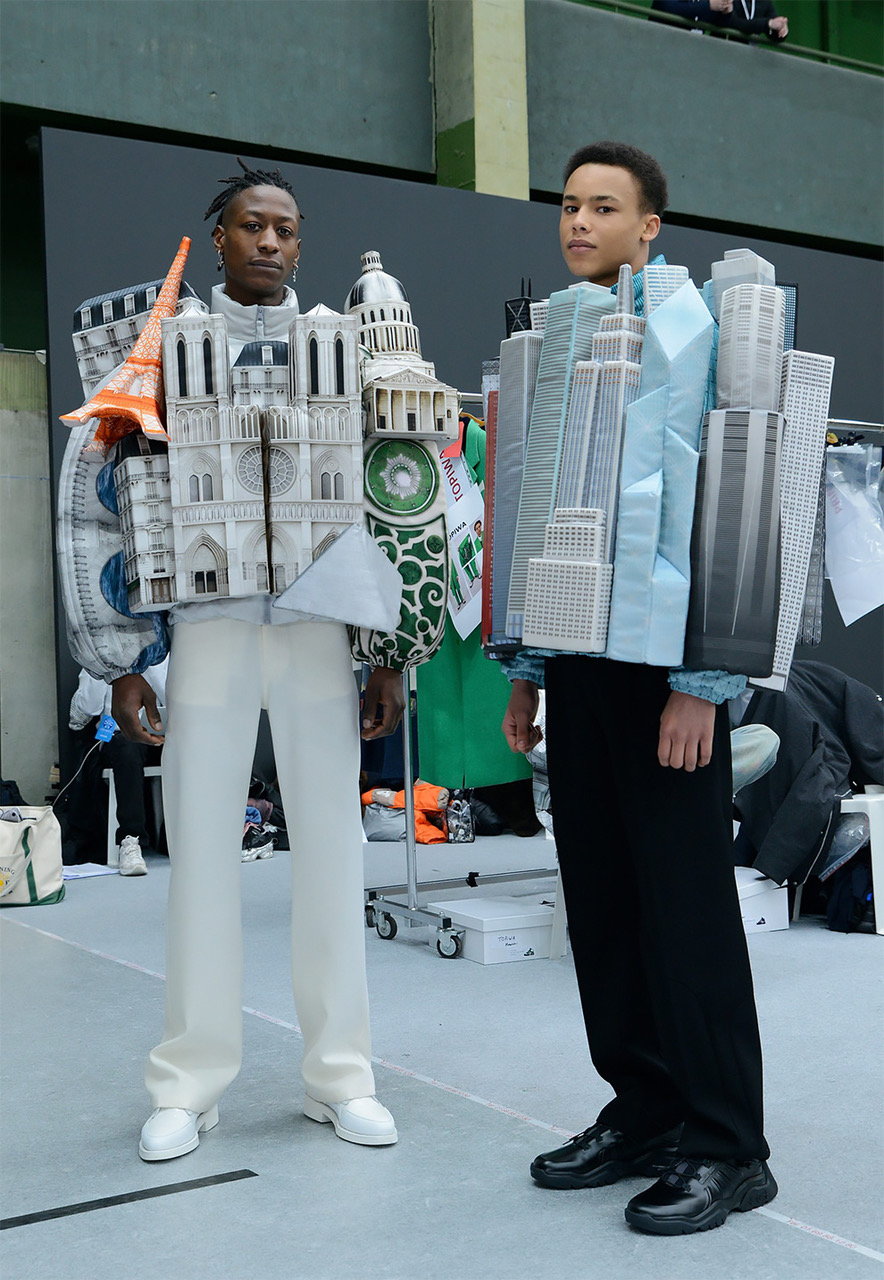 Abloh became Louis Vuitton’s Men’s Artistic Director in 2019. An artist, architect, engineer, creative director, and designer, Abloh completed a Master’s Degree in Architecture at the Illinois Institute of Technology in a curriculum founded by Mies van Der Rohe, an influence that comes through more clearly in this collection than perhaps any other in his career.