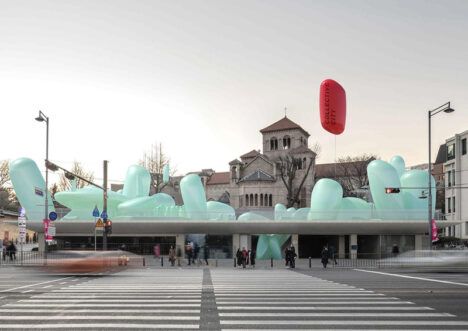 Strikingly graphic and fun, a new kind of garden has sprouted from the rooftop of the Seoul Hall of Urbanism and Architecture in South Korea. Moscow-based architecture firm SKNYPL transformed what was previously a flat, featureless surface into a multidimensional space for play, events, meetings, and, of course, Instagram photos. 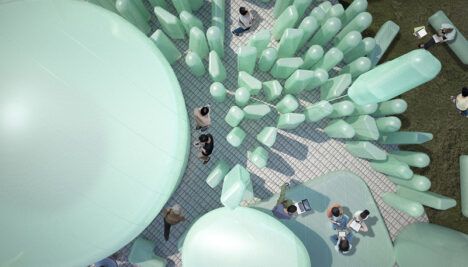 “New Korean Garden” is an inflatable structure made of ETFE material, which is filled with air to make it easy to install, disassemble and transport. It’s also recyclable, an important factor when utilizing large amounts of plastic.

This modern riff on the traditional Korean garden retains the minimalism of the real thing while abstracting it in a gorgeous shade of cactus green. 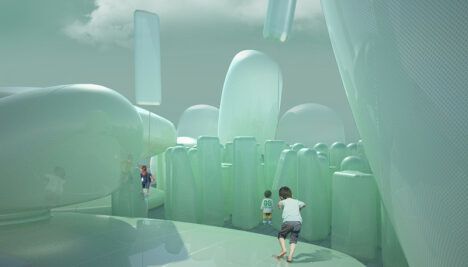 “It is a project to complement and update the roof of the Seoul Hall of Urbanism and Architecture,” says SKNYPL. “NEW KOREAN GARDEN personifies the Korean garden, explores it and gives it new meanings. The garden is unusual, it is transformed under the influence of new qualities laid in it by context, time and new events — multifunctionality, flexibility, instagramability, provocation and dialogue, and sustainability.” 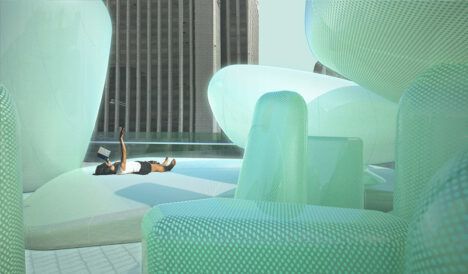 The architects say flexibility is one of the piece’s most important qualities, thanks to its multifunctionality and its ease of use and maintenance. Its unusual shapes and large profile make it a new landmark for the city and a major attraction for the Seoul Biennale, which runs from September 7 to November 10, 2019.

Initially created for the Seoul Maru Competition, the design is getting plenty of much-deserved buzz. “New Korean Garden” is meant to offer a comfortable setting for a variety of activities, and it contains multiple movable elements so users can interact with it and change the way it looks, shifting some of the “plants” and “rocks” to make way for performances or speakers, for instance. 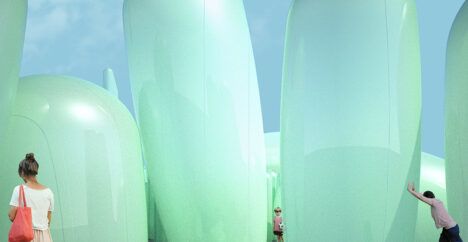 “Its main function is creative and hedonistic rest,” the designers say. “There, you can gather in a group and talk in a relaxed atmosphere, retire and read a book, lie down and watch the city from the outside, have the opportunity to come with the children and give them a playground for playing in the city center.”

The team explains that the sizes of the elements and their inherent mobility make it easy to transform the space for its various functions. The project is ideal for collaboration and interaction, allowing speakers to interact with visitors and set the tone for their performances. The exhibition also includes Flying Elements, which are filled with helium and can send announcements, slogans, and performance-related text above audiences, adding another playful and functional touch to the design. 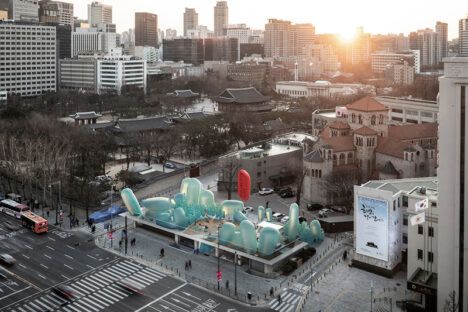 Some observers might say that replacing a living garden with plastic is never a good idea, and it’s probably good to keep this kind of thing to a minimum, given the imperative to reduce our use of plastic worldwide. But the coolest aspect of “New Korean Garden” — its flexibility — also allows it to conform to new uses, something we’ll need to see a lot more often to reduce waste in the future.